No.  I honestly don’t know why you even picked Ryan. There are so many better options than him. If you’ve picked him by accident, I feel bad for you, and I’m sorry that happened to you. I offer no rune recommendations for him, because he’s honestly just a storage guardian. I mean, yes, he does bring Continuous Damage, unreliable defense break and unreliable healblock, but everything he can do (minus the attack buff and healblock) is done better by Lanett, who’s also a Hall of Heroes choice this year. I really wish you hadn’t picked Ryan; or if it was by accident, I am so sorry. I press my “F” key to pay my respects. Either way, if you did pick him, might as well read on so that you can get as many pieces of him as possible. 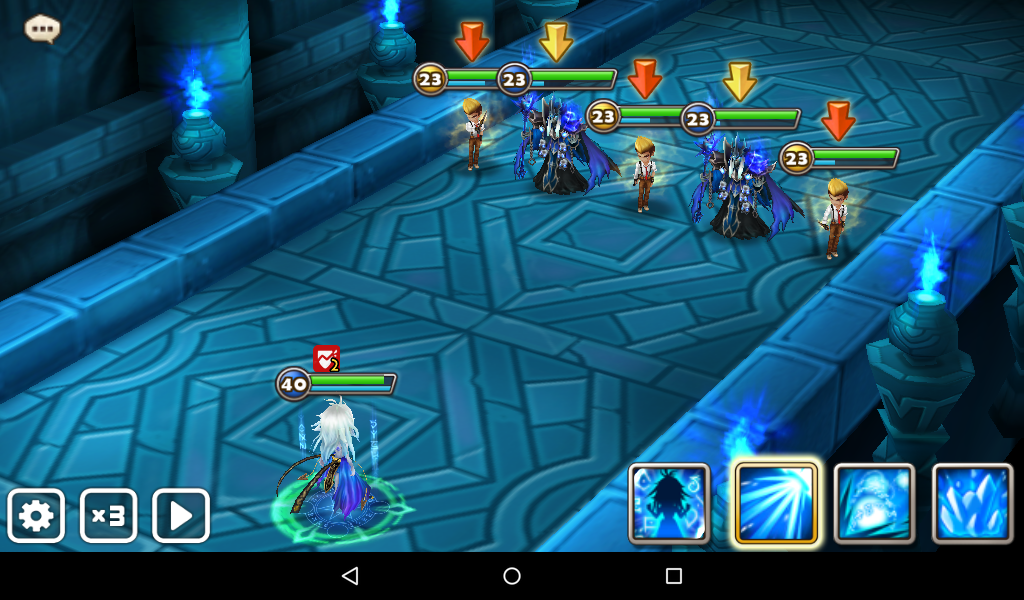 Let’s begin this Hall of Heroes by fighting a Rigel pain in the butt; aka Wolverine, aka Logan. This stage consists of three Logans (wind Neostone Fighters) and two Rigels (water Liches) The Threat: I’d say that Rigel is the biggest threat. He has a passive skill that says he’s gained Immunity to sleep, stun and freeze effects and decreases his chances of getting hit with a critical hit by 25%, so that means you can’t Verad your way through killing him. Let’s also not forget he’s got defense break and freeze on his second skill, and you have a recipe for disaster. While Logan is considered one of the more “meh” Neostone Fighters, it turns out he’s actually kind of a massive nuke. His third skill, Push Through, attacks an enemy two times and decreases their attack speed for 3 turns while also decreasing their attack bar by 30% per hit. If the enemy’s attack bar is depleted with this hit, he’ll instantly recover a turn. His second skill has a pretty high multiplier, so there’s also that. The Solution: Kill Rigel first. He’s really the biggest threat out of this stage, and though he can’t be stun-locked, you can decrease his attack bar. I’d recommend bringing an AoE speed and attack bar decreaser like Spectra. Logan won’t be much of a problem if you make sure he’s stunlocked throughout the entire thing, and then you can go on to stage 2. 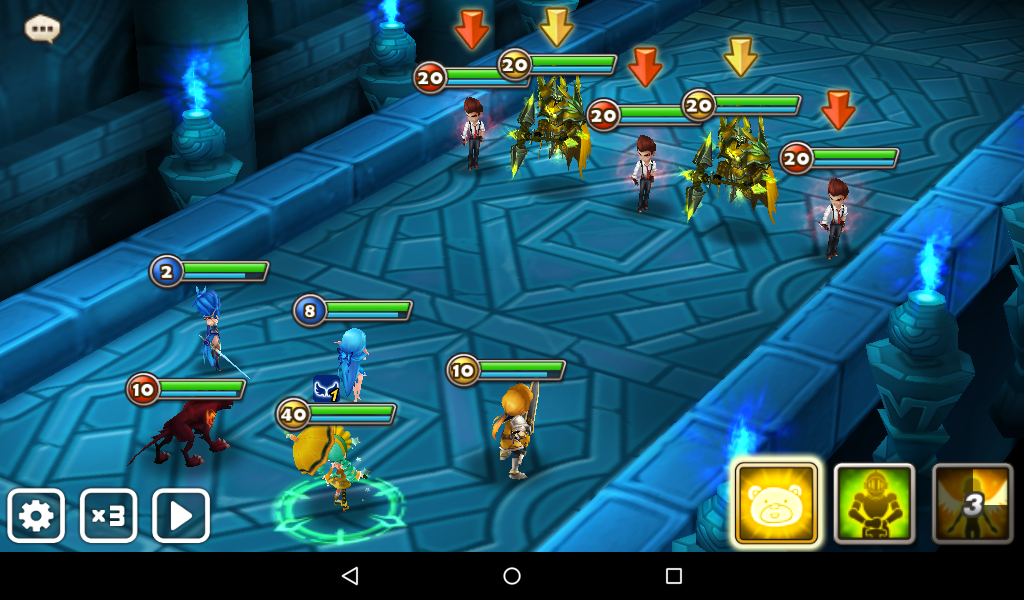 Do you ever think that whenever someone mentions that they taste blood, Copper pipes up with “who’s been eating my fire bro AGAIN?” This stage consists of three Trevors (fire Neostone Fighters) and two Coppers (wind Living Armors) The Threat: Copper is the main threat here. His third skill, Thunder Strike, will attack an enemy, and if the enemy’s defense is 50% lower than his, he’ll ignore their defense. Reminder that the stats on the Hall of Heroes mons will increase beyond their maximum stats as you get onto the later stage, meaning it’ll get harder and harder to make sure he doesn’t ignore your defense. Trevor is also considered the best of the Neostone Fighters, because of his passive skill. As his HP decreases, his attack power increases and the amount of damage he takes decreases. I guess the one good thing about Hall of Heroes is that there’s no chance of Trevor being runed on Vampire runes like you’d see in the Arena and whatnot. The Solution: Break the defense of Copper first. This way, it’ll be harder for him to Ignore Defense. You can pretty much leave Copper alone after that, and then work on killing Trevor. Trevor’s going to get stronger and harder to kill as his HP decreases, so be careful! I’d recommend breaking his attack power beforehand as you kill him, so this way he’ll do less damage to you. Once Trevor’s dead, you can focus on Copper, and when Copper’s down, continue on to the miniboss stage. 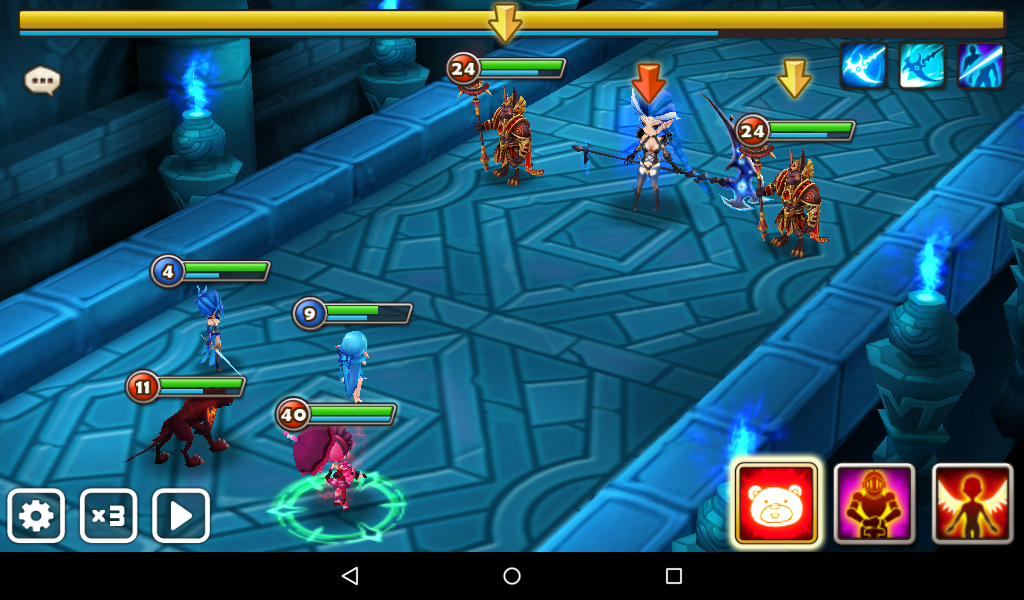 It’s Beth to prepare yourself ahead of time before you enter the Hall of Heroes. I mean, Khmun, you’re reading my articles on how to clear HoH, you should know what to do by now. Miniboss time! The miniboss here is one Beth (water Hell Lady) and two Khmuns (fire Anubises) The Threat: The threat would definitely be Beth here, because of her second and third skill: Gouge and Eternal Scar. Gouge attacks all enemies three times, leaving Continuous Damage on them for 2 turns every hit (meaning up to three DoTs). Eternal Scar will attack all enemies twice; on the first hit she’ll break their defenses for two turns and the second hit block their healing for two turns. Additionally, it’ll destroy the enemy’s Max HP by 50% of the damage dealt – meaning that if she attacks all enemies and it does 3000 damage in total, their max HP will be decreased by 1,500. Khmun is a total nuisance, too. Every time he gets his turn, he’ll grant a shield proportionate to 20% of his Max HP for two turns on the ally with the lowest HP ratio. Basically, if you’re killing Beth, but haven’t touched either Khmun, they’re both gonna cast a shield on Beth. The Solution: I bet you’re expecting me to say “kill Beth first” Actually no, don’t kill her first. Kill the Khmuns first so this way they can’t cast shields on people. The shields are highly annoying, especially in later floors. If anything, they can be the difference between a successful run and getting shamefully wiped out at stage 3. When Khmun is gone, then you can kill Beth. 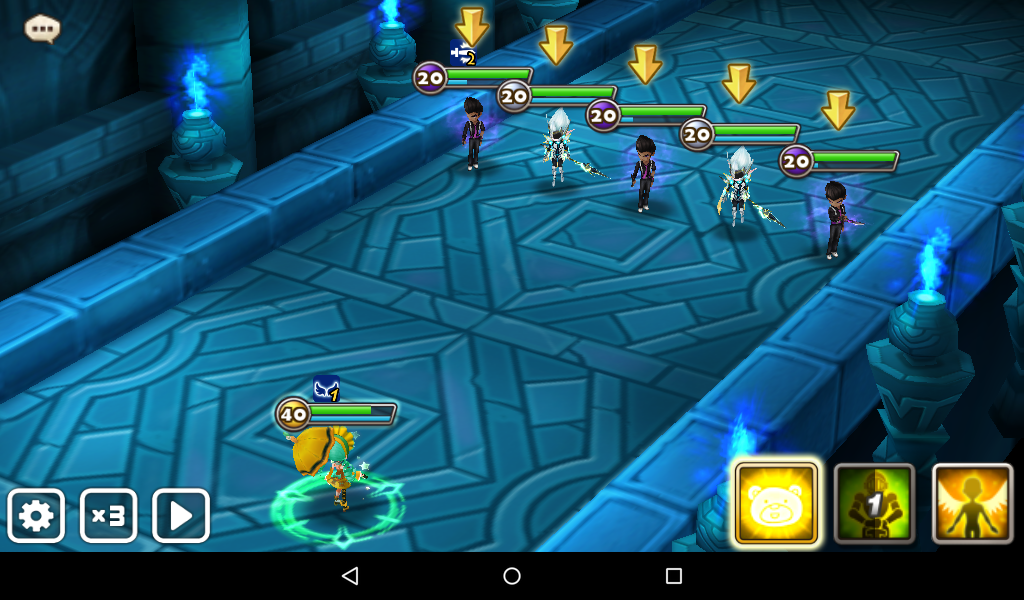 Karl; that kills people! Here, we have three Karls (dark Neostone Agents) and two Eredas’ (light Sylphs) The Threat: Karl was a previous Hall of Heroes last year, and now that I’ve got a copy of one in Storage, I’ve built him a few times and his damage is pretty good. His skillset’s pretty nice, too. Skill 3, Piercing Dagger, is guaranteed to be a Critical Hit, plus the multiplier is 770%; almost as high as Brig’s third skill. Skill 2, Relentless Strike, increases his Critical Rate for 2 turns and will instantly attack a target he chooses. In other words, he’s a damage dealer all the way around. Eredas is just kinda meh. His third skill is basically just his second skill hitting twice – I kid you not, his second skill Cyclone hits all enemies two times, and his third skill Double Cyclone hits everyone four times. In other words, it’s “not one, but two Cyclones” I’ve said that out loud to myself a few times and it always gets a laugh, because of how ridiculous Eredas’s third skill is. I have a feeling Com2uS was being lazy when designing his third. The Solution: Definitely go for Karl first. Eredas may be annoying (as his third skill can stun people), but at least Eredas doesn’t have the potential to kill one of your monsters. Karl, on the other hand, does. Because he’s going to always have a Critical Hit on his third skill, Karl will be doing nothing but Critical Damage, which you don’t want. When Karl’s done, Eredas will be just a cinch. You can finally move on to stage 5, where afterwards, the boss awaits you! 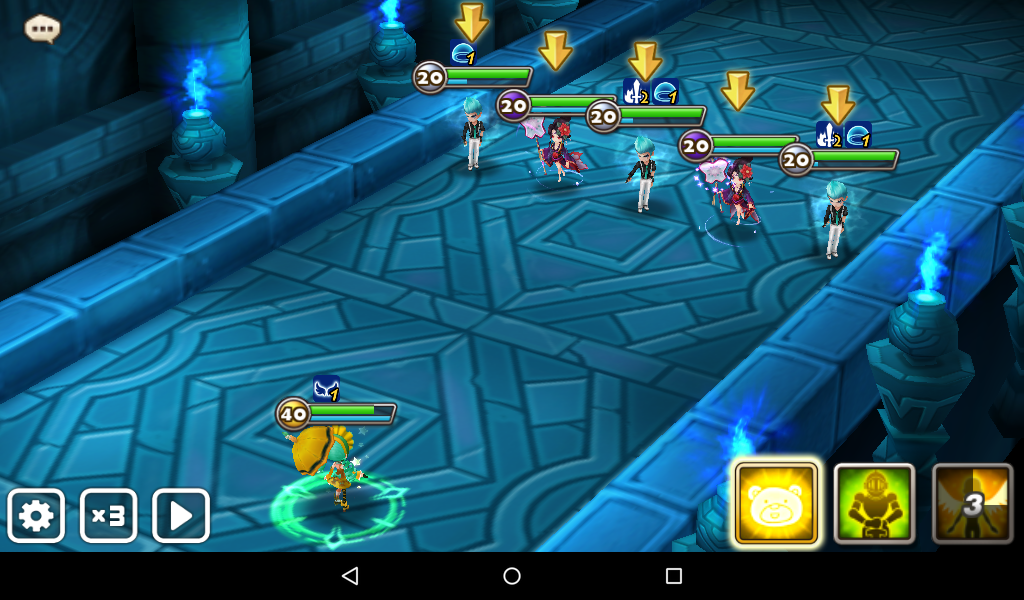 -insert Stranger Things joke here- Stage 5, the final stage before the boss, consists of three Lucases (light Neostone Agents) and two Icares’ (dark Sylphids) The Threat: I’d probably say that Icares is the deadlier of the two monsters. Her third skill, Dark Recovery, will attack an enemy. The damage, however, is equivalent to 50% of her Max HP and she recovers that HP – in other words, she’s a better version of Arnold. If and when the enemy dies from this attack, she’ll instantly gain another turn. As mentioned, when you’re progressing in the later floors of Hall of Heroes, the base stats of monsters are going to greatly increase: this also includes the Max HP of monsters. It’ll be a little difficult to not die from this attack. Icares is pretty powerful, but Lucas is strong too. He’s got a passive skill, called Born to Fight, where after he attacks he generates a shield on himself for one turn; said shield 50% of the damage he dealt on that turn. His critical rate increases by 30% with the shield on, and he’ll deal additional damage proportionate to the shield with every attack. The Solution: If you have any monsters who can destroy the Max HP of enemies, I’d use them. Someone like Beth would work wonders here; not only does she destroy Max HP, but she also leaves a healblock on everyone for two turns. This way, Icares’s Dark Recovery will deal less damage and won’t heal herself when she attacks. After that, Lucas should be easy enough. Though he does generate shields on himself, it’s easy enough to break them, and when you break them, he’ll easily be killed, and then you can go to the boss stage. 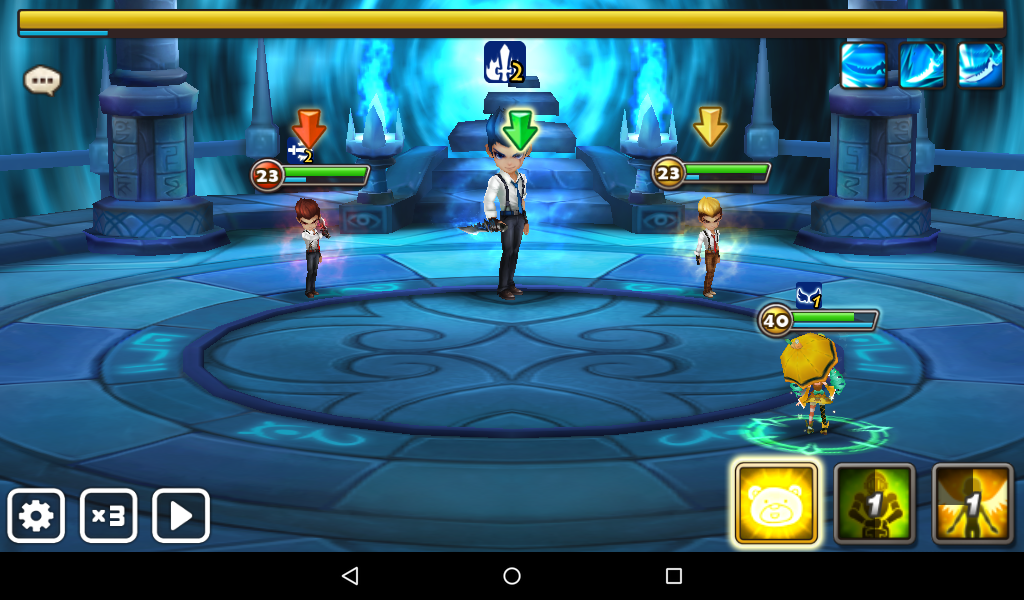 As always, when you get to the boss stage of Hall of Heroes, you’re going to see that this stage has the most variety out of all the other stages in the floors of Hall of Heroes. This is because the lackeys change the higher up you get. Here, we have Ryan, and his lackeys Trevor and Logan. The Threat: The threat varies based on who the lackeys are. In this case, I’d say that the biggest threat is Trevor, because of his passive skill. Other times, the two lackeys would be, say, Logan and Karl. If that were true, then the most dangerous of the three monsters would be either Karl or Ryan. The Solution: Like the threat, the solution varies based on who the threat is. Here, kill Trevor and then go directly for Ryan. You don’t need to worry much about Logan, you just want to kill Ryan and get your pieces/lament about how you picked Ryan when you wanted Lanett or whatever. I hope you enjoy this anniversary Hall of Heroes, because I enjoyed it too! I’m Sara Ann, and I’ll see you in my next four or so articles that are getting released today because I still have one more choice to cover, that choice being Surtr.]]>