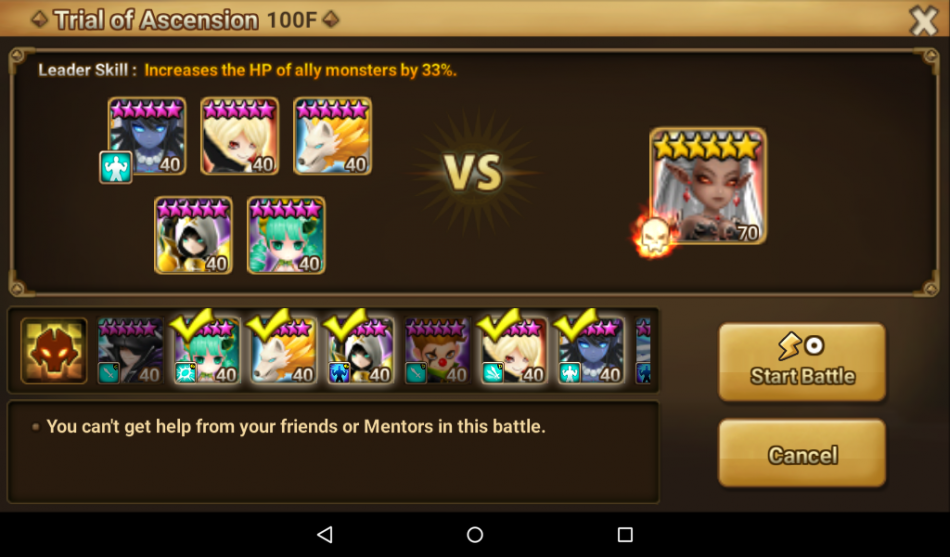 <![CDATA[Because the Trial of Ascension has just reset today as I type this, I decided to write an article on the tips and tricks to ToA that everyone should know! It took me a while to learn about the things I’m going to talk about in this article, but I’m going to make sure that other newbies don’t make the same mistakes I did; plus I can recommend you a easily obtainable free-to-play team. <h1 style="text-align: center;">Continuous Damage 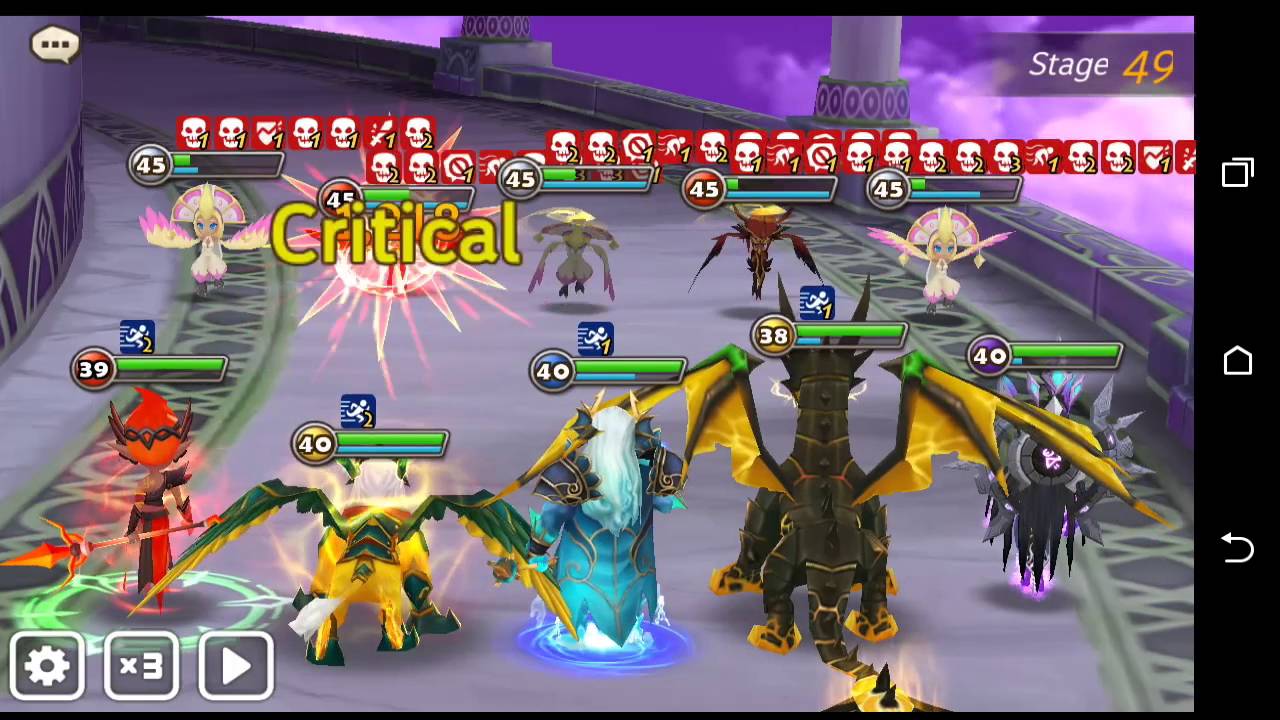 Continuous Damage is the real MVP of Trial of Ascension. When you’re facing off against five monsters, all of which looking for a taste of your team’s blood, you’ll learn that the best way to win in Trial of Ascension is to kill them quickly. One of those ways that’s recommended is Continuous Damage. For a certain amount of turns, the enemy’s HP will be decreased by 5% of their Max HP. Veromos is a pretty sweet source of DoTs (or Damage Over Time) but the main source of DoTs that most people turn to in Trial of Ascension is Baretta. Don’t you worry; I’ll get to him later on in this article, but for now, remember that a constant source of Continuous Damage is something that many people turn to in ToA.

Attack bar manipulation is another thing that people do when it comes to Trial of Ascension. I cannot believe it took me well over a year to understand what the heck attack bars do, so I’m going to explain it to you all so that you don’t make the same mistakes I do. Attack bars, the little blue bars under the monster’s HP bar, basically tell when monsters get their turns or not. Speed is what determines how fast the attack bar fills up, but that doesn’t mean that you can’t push back the attack bar meter, or even completely reset it; meaning it could take even longer for the enemy to get their turn. There are five monsters on the first two stages of each Trial of Ascension floor, and then the third floor is whatever is shown on the team selection screen. Each monster, unless they have a passive that specifically says they’re immune to attack bar manipulation (which includes Akroma,) can easily have their attack bars reset; preventing them from attacking your monsters. Baretta, the fire Sylph, has a complete single-target attack bar reset. 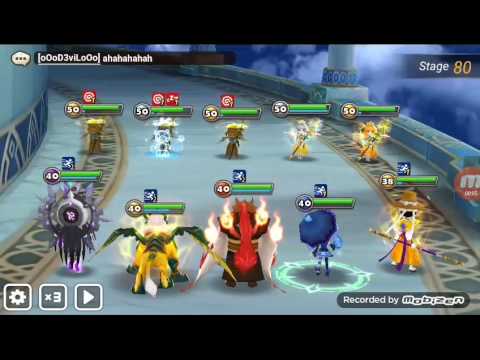 Another staple in Trial of Ascension; stuns and freezes, unless somehow cleansed, will prevent monsters from moving until their next turn. This is why monsters with AoE attacks and are on Despair runes are great, because they can stun multiple people at once. If you put Baretta on Despair runes, not only will he be able to stun enemies, but he’ll inflict not 1Continuous Damage, but 2 with his third skill! Alright, I’ve mentioned Baretta quite a bit already, so you may be wondering who he is. Well, I’ve dedicated an entire section to him. 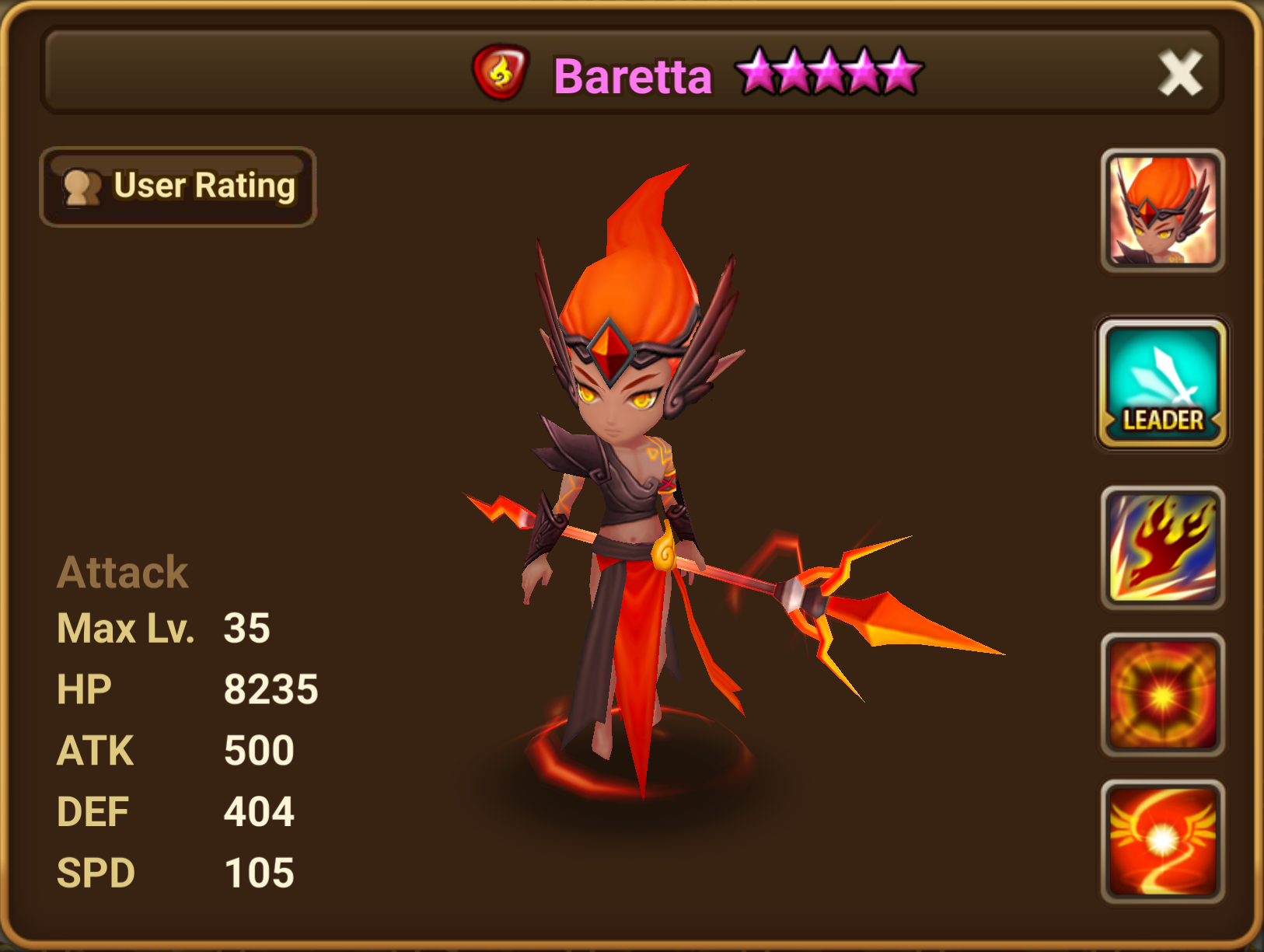 Baretta is the fire Sylph, a four-star monster that you can actually fuse in the Fusion Hexagram! You may be thinking as to why I’m talking about some Katarina fusion material; because you’re probably assuming that, like Akia, Argen, Jojo, etc. Baretta is also trash. Well you are completely and utterly wrong, buddy-o. We’re going to gloss over his first skill; there’s not really much to talk about there. Instead, we’ll talk about his second and third skills: Turbulence and Phoenix’s Fury. His second skill, Turbulence, does a complete attack bar reset on one target, meaning that they’ll have to completely charge up their attack bar again if they want to get the turn that they missed. This is very helpful for boss stages, where the bosses are immune to sleep, freeze, stun, Oblivion, and Continuous Damage, but not attack bar manipulation. Speaking of Continuous Damage, his third skill, Phoenix’s Fury, is really what makes him shine. When awakened, he’ll inflict damage and two Continuous Damage effects for two turns! When you put him on Despair, he can really wreak havoc on the monsters in ToA, let me assure you!

Your Trial of Ascension Team 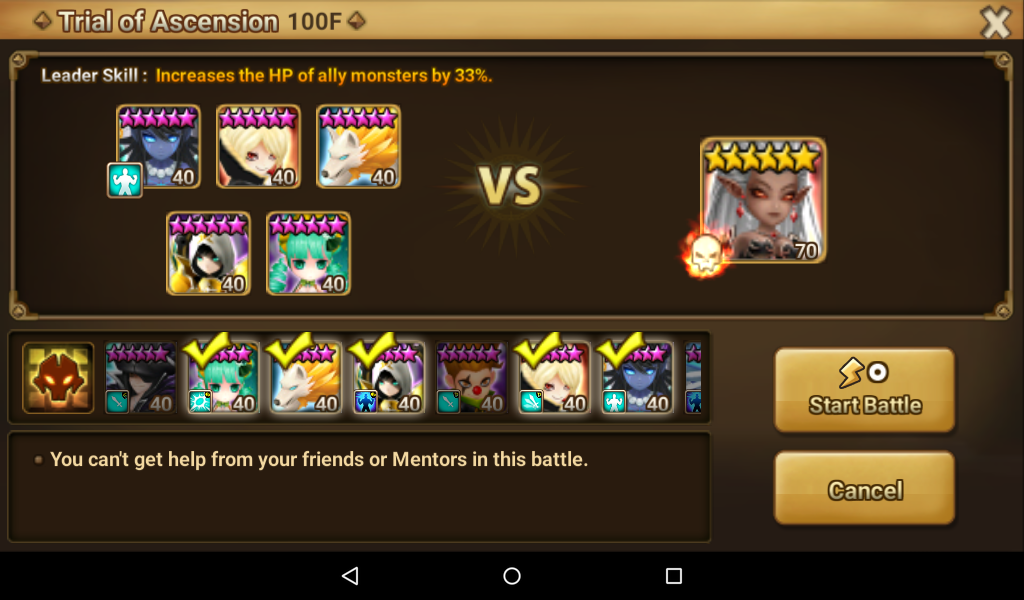 Unless you have everyone in that picture, I recommend not to use my team as your team; I have quite a few monsters that aren’t easily “farmable” – in fact, two’s a natural five star (Charlotte and Eladriel), and a really good but pretty rare natural four star (Verdehile), none of which I’m pretty sure you have. Therefore, I’m here to tell you about a farmable team that anyone can get!

Baretta – Let me just say that I seriously regret not fusing Baretta sooner. I thought to myself “Oh, I can make do without him; I’ve gotten this far anyway” As mentioned, he comes with a speed lead, a complete single-target attack bar reset, and two AoE Continuous Damage effects! This guy should usually be your leader; though I sometimes switched to Veromos as leader so that I had more HP on certain stages. Needs a maximum of 45% Accuracy. Rune Set: Despair + Focus, SPD/HP%/HP% (or ACC%)

Veromos – I’ve said, many times before, that Veromos is the real MVP of early-game.  He’s pretty great in Trial of Ascension because of the AoE stun on his second skill and the Continuous Damage on his first. Needs a maximum of 45% Accuracy. Rune Set: Swift/Violent + Focus, SPD/HP%/HP%

Belladeon – Bella will be your primary source of heals and defense breaking, as always. Nothing new to talk about here. Needs a maximum of 45% Accuracy. Rune Set: Swift + Focus, SPD/HP%/HP%

Spectra – As mentioned in my article about creating your DB10 team, not only is Spectra pretty good for your first DB10 team, but he’s a beast in Trial of Ascension. In case you don’t know, his base speed, when awakened, is 126; which is literally the highest base speed in the game! His second skill will deal damage off of the enemy’s Max HP, and his third decreases everyone’s attack bars by 30% and leaves a decrease in attack speed for two turns. Rune Set: Violent + Focus, SPD/CRIT DMG%/ATK% Your +5, like many other teams, varies depending on you. However, here are a few obtainable +5s that I recommend.

Mav – Mav actually isn’t completely farmable; unlike Hemos, Spectra, etc. you can’t fuse him or get him from a Secret Dungeon. Though I make it sound like he’s as rare as a light natural five star, he’s a three-star monster (wind Penguin Knight), so, like Megan, he should be easy enough to obtain for your ToAN team. I highly recommend this guy the most as your +5.

On top of him being pretty common, he’s also really good! His third skill, Wings of Wind, removes one bad effect (whether it’s stun, sleep, freeze, defense break, you name it, he can remove it) off of all allies, decreases the cooltime of all their skills by one turn and gives a two-turn speed buff. When it’s fully skilled up, it has a cooltime of only three turns! His second skill, Declare War, will recover his HP by 25% and has a 75% chance to provoke the enemy for one turn. This means that, if used on a boss monster, they’ll be forced to attack him; which is why you should make your Mav tanky. He should be the last to go in your team, but still be fast, so this way his third skill doesn’t go to waste. Needs a maximum of 45% Accuracy. Rune Set: Swift/Violent + Focus/Energy, SPD/HP%/ACC%.

Hemos – His dark brother, Thrain, is far better for the role than he is, but this is about obtainable monsters that you can easily get/you probably already have. The only reason why I’m recommending Hemos is because of his second skill, “Plague” which is like Baretta’s Phoenix’s Fury; it inflicts two Continuous Damage on all enemies. I don’t really recommend this guy, to be honest with you. Needs a maximum of 45% Accuracy. Rune-Set: Fatal + Focus, SPD/HP%/HP%

Krakdon – Krakdon is actually a pretty weird choice at first glance; I haven’t seen that many people recommend him, but I’d say he’s a pretty underrated monster. His second skill upon awakening stuns whoever you attack it with, and his third, Earthquake, will decrease everyone’s attack bar by 50%. You can get him from farming Faimon Volcano, too. Needs a maximum of 45% Accuracy. Rune-Set: Guard + Guard + Focus, SPD/DEF%/DEF%

My own team for anything before Trial of Ascension 80 was a “DoT Team,” meaning I focused on using Continuous Damage to kill my enemies quickly – I used Baretta, Thrain (dark Grim Reaper), Charlotte, Veromos, and Belladeon. I would not recommend this team, if you somehow have Charlotte and Thrain; for boss stages. This is mainly because bosses are immune to Continuous Damage and stuns. Anyway, I’m Sara Ann, and I’ll see you in the next article!]]>