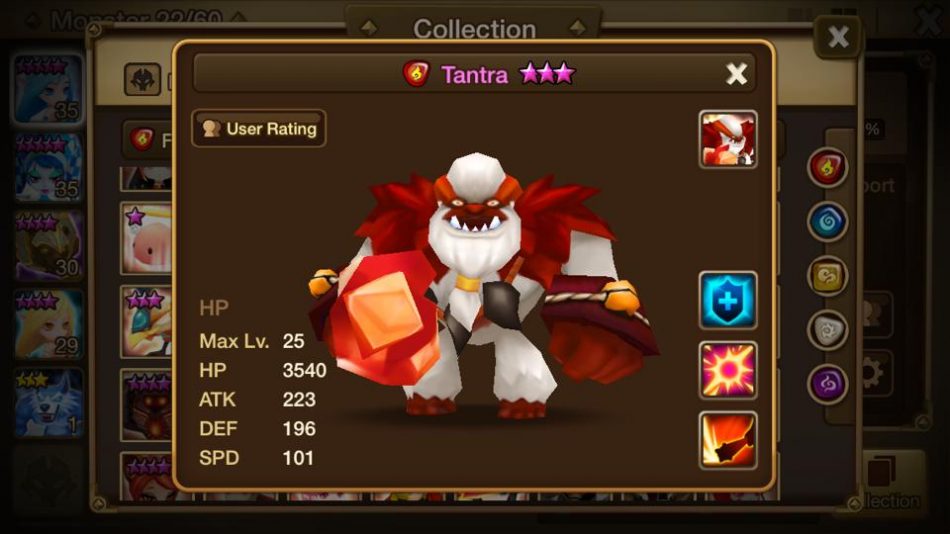 <![CDATA[So you’ve gotten Mina, leveled her up, didn’t awaken her, and you put her in storage and you’re asking yourself: <em>what do I do now? Now you can fuse Susano, the water Ninja! Though it’s a tad strange that he has a mostly feminine name, that’s beside the point! For now, we’re going to take a look at his recipe and how to fuse him. We’ll start with the easiest monster to obtain. 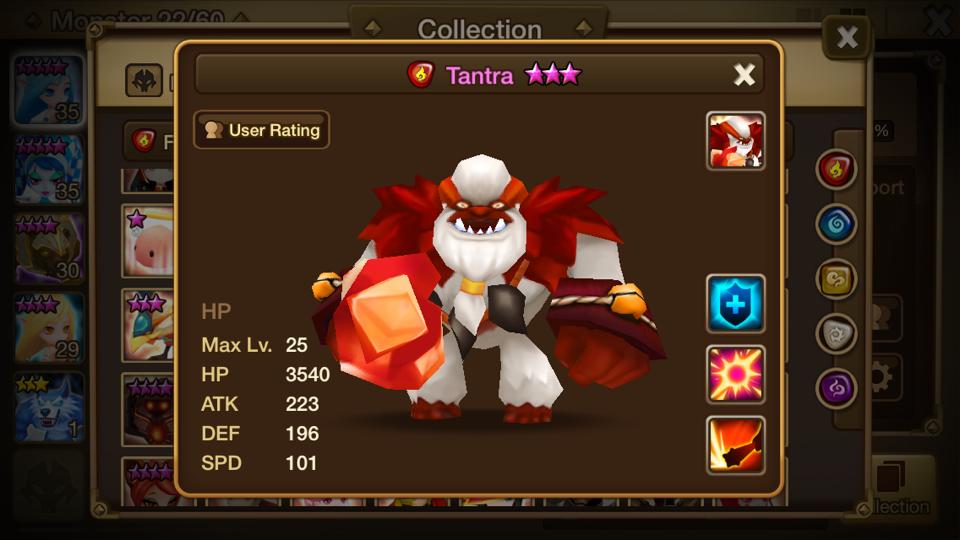 The easiest way to get a Tantra is to just summon Unknown Scrolls, Social Summons or use his Secret Dungeon! It’s somewhat rare to find a two-star monster in the shop, much less the one you actually want, and so I recommend you hunt for him in the shop only if it’s absolutely necessary (e.g. you’re having a terrible dry streak, like I did when trying to get Kacey for Veromos)

I find it a tad strange that there’s a fire Yeti out there, just like how there’s a fire Polar Queen. However, Tantra isn’t that special of a monster; he’s just a two-star with a self-heal (and a self-shield) I’m not sure if you should keep him around unless you’re ultra end-game and can afford to play around with usually ignored monsters. Other than that, just use this guy to fuse Susano. 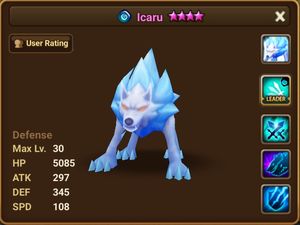 Awakened Icon (out-of-date)[/caption] Icaru is the water Inugami, and the first boss you beat in the beginning of the game, in Garen Forest (though he’s called Anubis for some reason and basically has Roaq’s passive). You can get him from Unknown Scrolls, Mystical Scrolls, Social Summons, the Temple of Wishes, Crystal Summons, and Water Scrolls.

Unfortunately, the only Inugamis that do have Secret Dungeons are Belladeon (light) and Kro (dark) which is completely and utterly RIDICILOUS IF I DO SAY SO MYSELF COM2US – anyway. The quickest way to get an Icaru is to farm Garen Forest, more specifically, the boss stage in Hell Mode. I actually looked it up, and Stage 7 of Garen Forest Hell has the highest chance of dropping Icaru.

Definitely don’t keep a version of Icaru to use in other places. Sure, his skillset looks tempting; he’s got a 23% speed lead for all water monsters, and can team up with another ally to attack another monster, which could be great if their first skill is AoE. However, his third skill is absolutely abysmal; a four-turn cooldown for a one-turn counterattack buff on himself only. Let’s also not mention that he’s supposed to be a defense monster, and most of his attacks are based off of his attack power, making him one of those poor monsters who are confused about their role in the game. I recommend you only use him to fuse Susano, it’s not even worth it to try and use him end-game. 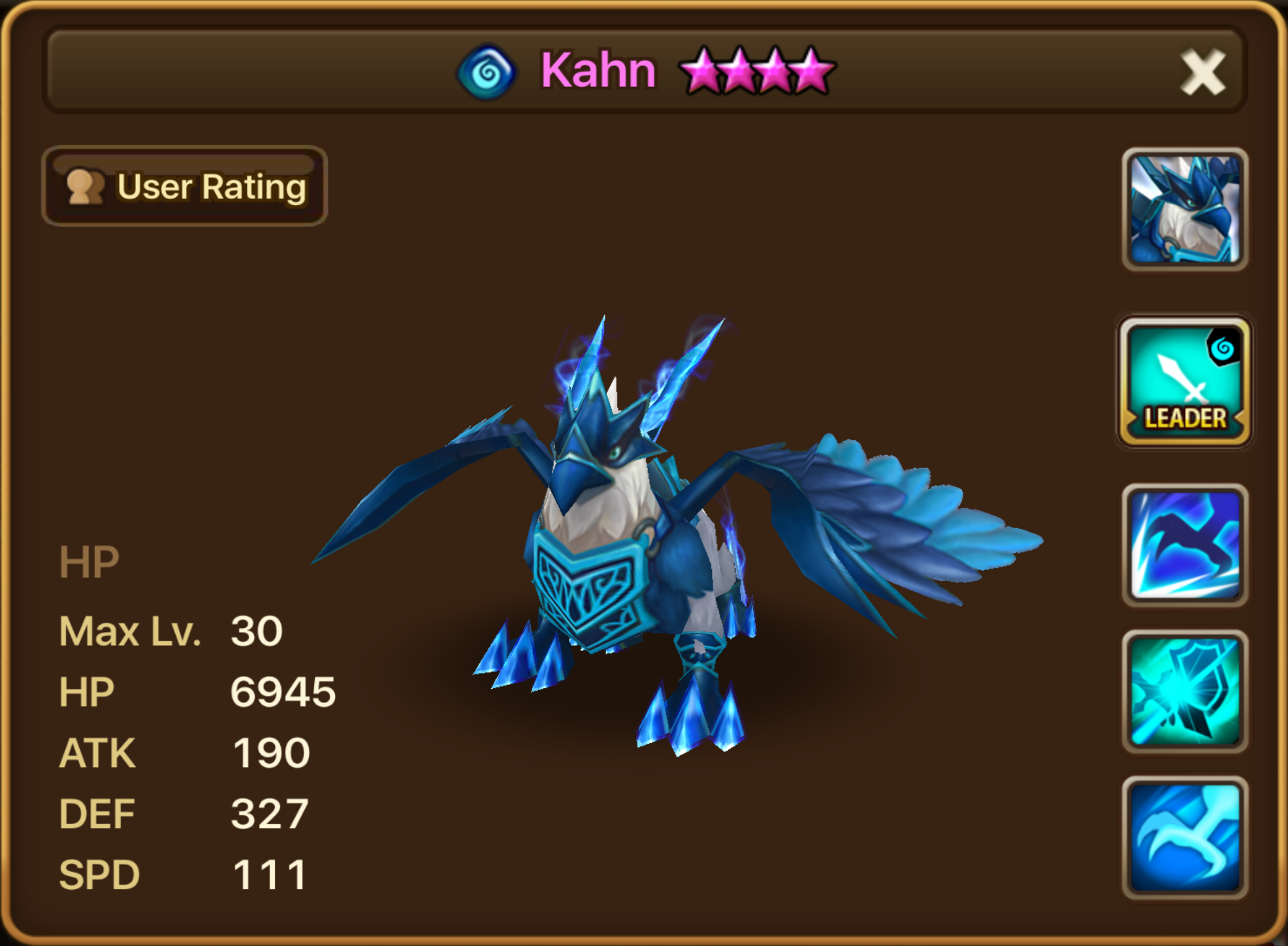 Awakened Icon[/caption] Kahn is the water Griffon, otherwise usually known as skillups for Bernard or Spectra. You can find him in Unknown Scrolls, Mystical Scrolls, Social Summons, the Temple of Wishes, Crystal Summons, Water Scrolls, and his own Secret Dungeon.

The best way to get him is to farm 40 pieces from his Secret Dungeon, which is available on Wednesdays. Once you hit the last few levels of the dungeon, his third skill really starts to hurt, so I highly recommend bringing good healers (e.g. Belladeon)

I feel like Kahn could actually be a pretty decent World Boss monster once you’re around end-game or so. He’s got Pursuit, which deals damage based off of his speed and his Max HP. It really hurts, especially in the Secret Dungeon. Consider keeping a copy around so that when you hit 30 second GB10/DB10/NB10 runs or whatever is the accepted time to be considered an end-game player you can build him for World Boss. Awakened Icon[/caption] Dagorr, the wind Bearman, is a three-star monster. You can get him from Unknown Scrolls, Mystical Scrolls, Crystal Summons, Wind Scrolls, the Temple of Wishes, Social Summons, and his own Secret Dungeon.

The best way to acquire him is to use his Secret Dungeon, which is available on Thursdays. I recommend using plenty of fire monsters and/or attack bar boosters to make up for the attack bar that’s lost on your team when he uses his third skill.

I feel like Dagorr could be good, but he just sucks, with both of his skills. His second skill (removes 2 harmful effects off all allies and buffs them) makes him a budget Veromos, but if you’re fusing Sigmarus, I assume you already have Veromos, making him useless there. His third skill, which attacks all enemies and decreases their attack bars by 30%; seems promising at first glance. After all, Charlotte’s Wind Guardian Angel will decrease everyone’s attack bar by 30% with each hit. Remember, however, that Basalt’s third skill decreases all attack bars by 35%, and Krakdon’s decreases everyone’s by 50%; also remember that all three monsters are natural three stars, two of which farmable. Basically, this monster is also trash; just use him to fuse Susano. Once you’ve got all four monsters four-starred and maxed out, take them out of storage and awaken them, because now it’s time to fuse… 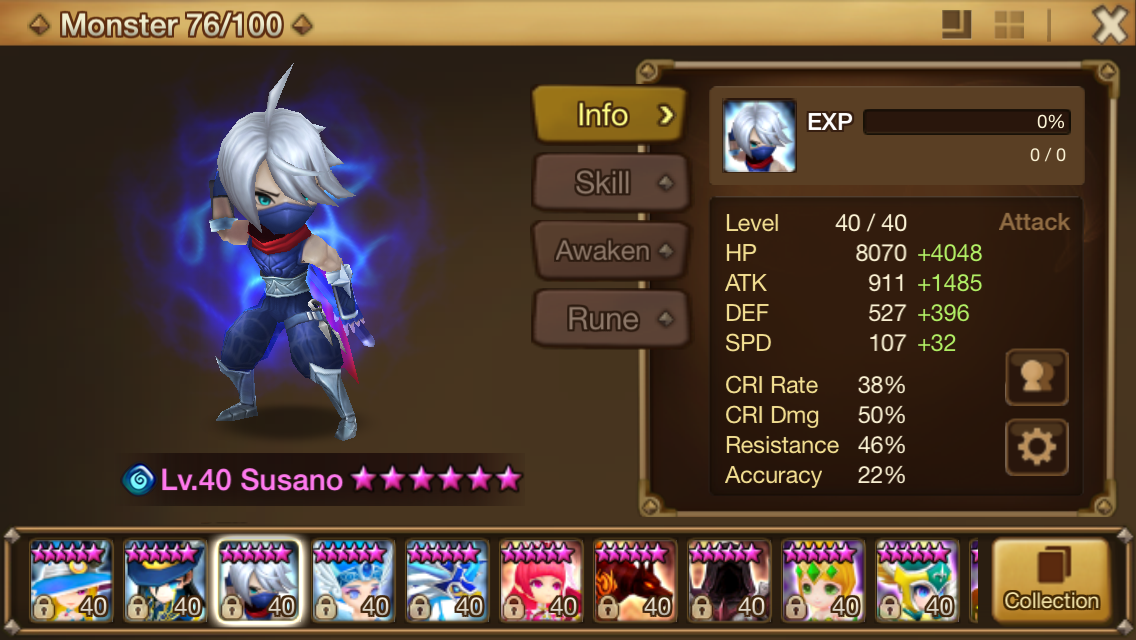 I’ve seen some people using him as a Faimon Volcano farmer, and I honestly can’t wrap my head around why. I’m not trying to insult people who do use him as a Faimon farmer; it’s just that I don’t understand. After all, his passive skill only increases his Resistance by 50% and decreases his chance of getting hit by a Critical Hit; not to mention his other two skills are only single-target skills. However, I have looked him over, and other than not being a good Faimon farmer, he actually does seem pretty decent. His attack, when awakened, maxed out and at level 40, is 911; in perspective, Arang (who’s got one of the highest base attacks of all natural four stars) has 944, and is tied at #5 for the highest attack in the game; she’s beaten only by the Phoenixes. Charlotte’s got the highest base attack of all the Occult Girls, but is only 848. Susano could actually be a pretty good addition to a DB10 team (though for a speed team; don’t put him in your starter team!) This is because, not only is he a water element, his first skill provides Continuous Damage; a must for all bosses, and his second skill reduces one enemy’s attack bar by 50%. His passive can also keep him from receiving the Continuous Damage debuff from the Dragon. While he is great for a speed team, for now I recommend that you just use him to fuse Sigmarus. When you max him out to level 30, put him in storage, because up next you’re fusing Jojo!]]>