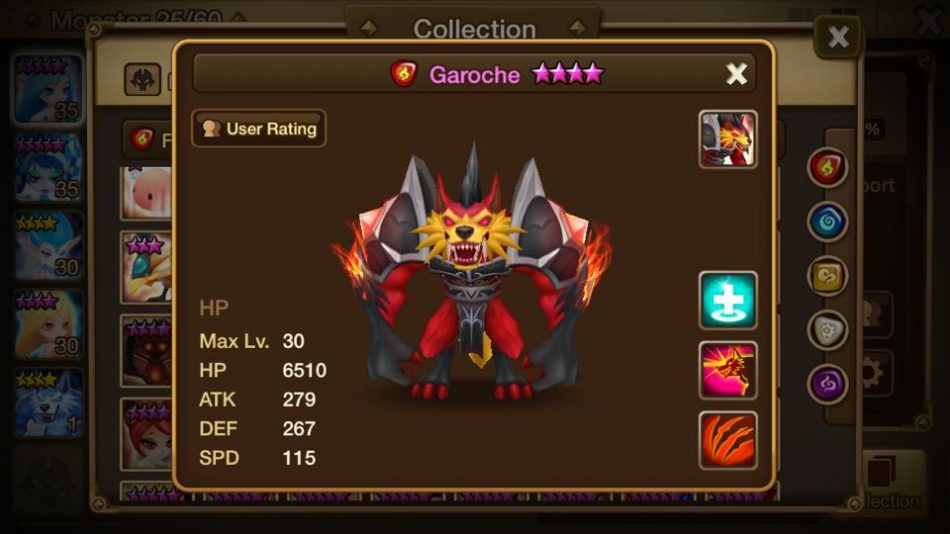 <![CDATA[It’s time to fuse Jojo – no, not <em>Jojo’s Bizarre Adventure – the fire Joker! He’s the second piece of the puzzle that you can fuse for Sigmarus. By the time you finish him, you’ll be more than three-quarters of the way complete when it comes to fusing! The most difficult (and tedious) part is leveling up and five-starring all four, but that’s not the point. 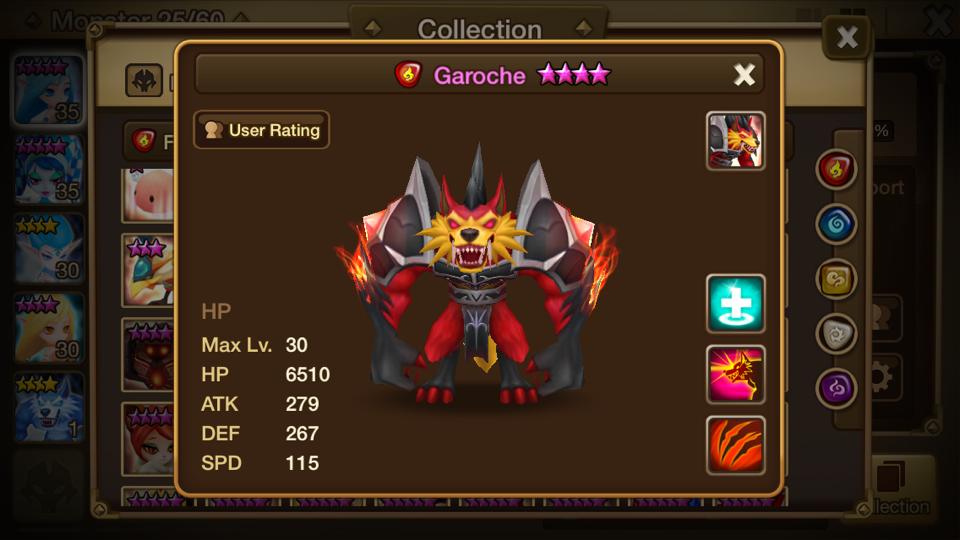 Awakened Icon[/caption] Garoche is the fire Werewolf. He can be found in Unknown Scrolls, Fire Scrolls, Crystal Summons, Mystical Scrolls, the Temple of Wishes, and is dropped at Vrofagus Remains.

I’m so sorry, you guys. Garoche is nearly impossible to obtain; he’s almost as difficult as getting Prilea, but that’s a story for another day. Your best hopes of finding him is to farm Vrofagus Remains (where, coincidentally, Kahli, who’s fusion material for Arang, drops) and hope you get the fire Werewolf. It will be a long, tedious grind, but just tell yourself this every time you fail to get Garoche: It’ll be worth it. By the time I fuse Sigmarus, I’ll be able to do DB10 with my water chicken.

Meh. Garoche’s not really that good; sure, he heals himself every turn, but other than that, I can’t see a use for him anywhere. Now, his light and dark brothers, Eshir and Jultan, are great. If you ever get a copy of one from your Light and Dark Scroll, definitely keep it. 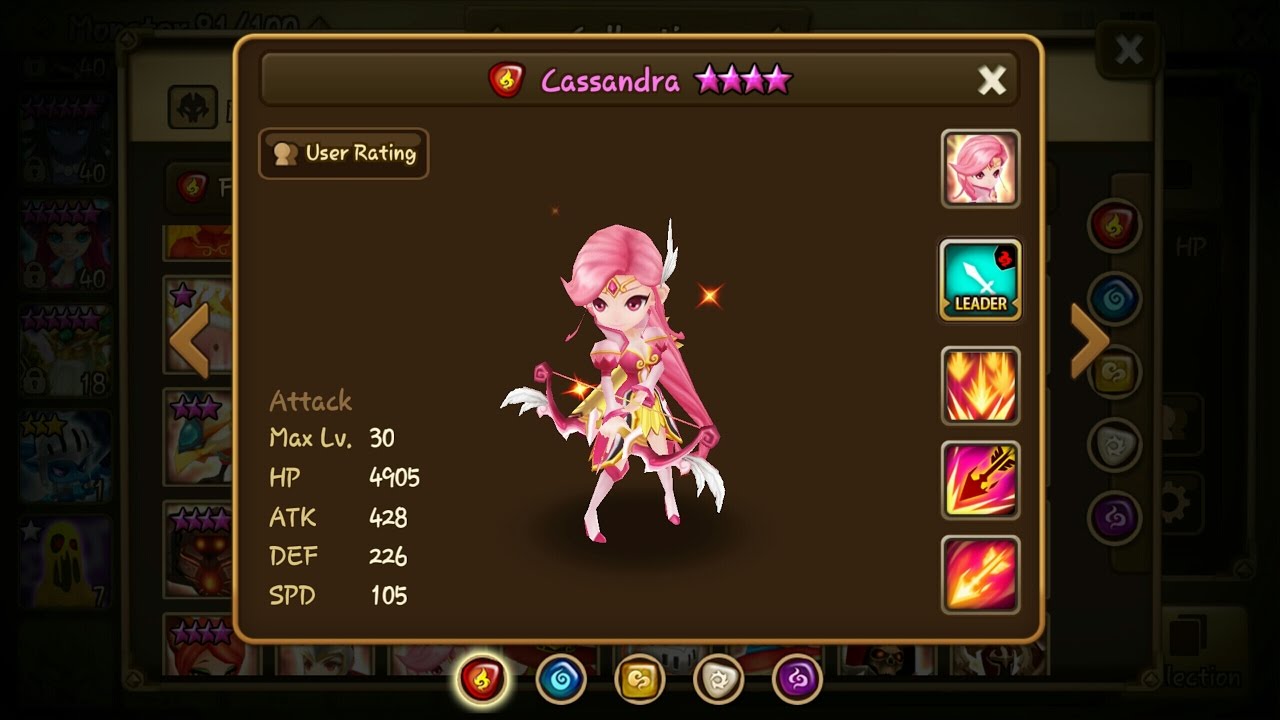 Awakened Icon[/caption] Cassandra is the fire Magical Archer, a 3-star monster. You can get her from Unknown Scrolls, Mystical Scrolls, Fire Scrolls, the Temple of Wishes her Secret Dungeon, Crystal Summons, and Social Summons.

The best place to get her to use her Secret Dungeon. I recommend bringing water AoE monsters (e.g. Alicia), and cleansers, such as Veromos. Her third skill dealds an AoE continuous damage per hit, so it’s important to keep that cleanser on your team, or else.

During my nooblet days, I actually kept a copy of Cassandra around and somewhat used her. She’s still not that good. I’d say that the best Magical Archers are Ardella, Chris, and Bethony. Cassandra’s basically a budget Baretta (who’s also fusable) because she’s mostly used for her third skill, which deals Continuous Damage both hits. Just use her to fuse Jojo; she’s bad, I should know. 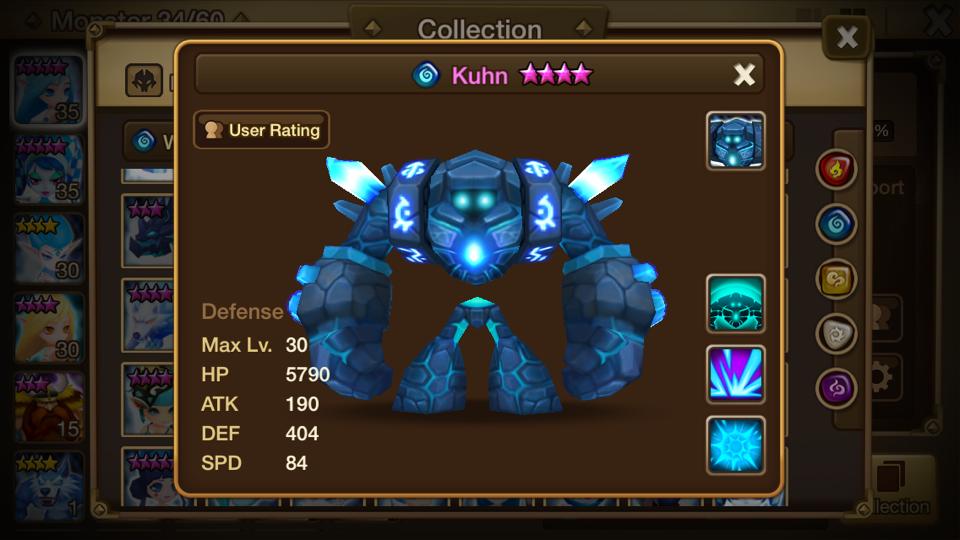 Awakened Icon (Outdated)[/caption] No, I wasn’t thinking of Kahn (water Griffon) and wrote Kuhn by accident, the water Golem’s awakened name is Kuhn. He can be found in Water Scrolls, Mystical Scrolls, Secret Dungeons, Unknown Scrolls, Crystal Summons, Social Summons, and the Temple of Wishes.

The easiest way to acquire this big golem guy is to use his Secret Dungeon, on Wednesdays. My recommendation is to bring a defense-breaker, because, once in the later stages, when his passive activates, it will be a pain to kill them all. This you should probably remember from GB10 (that frickin’ middle Golem…)

Did you know Kuhn has the lowest base attack in Summoner’s War? (That is, excluding two- and one-star monsters.) It’s true; his base attack, when awakened, six-starred and maxed out, is only 351. He’s also useless; his passive isn’t that good, and though he’s a defense monster and both skills scale off of his defense, the multipliers suck. Overall, this guy is t-r-a-s-h. Only use him and the other Golems – except the light one – for food and fusion. 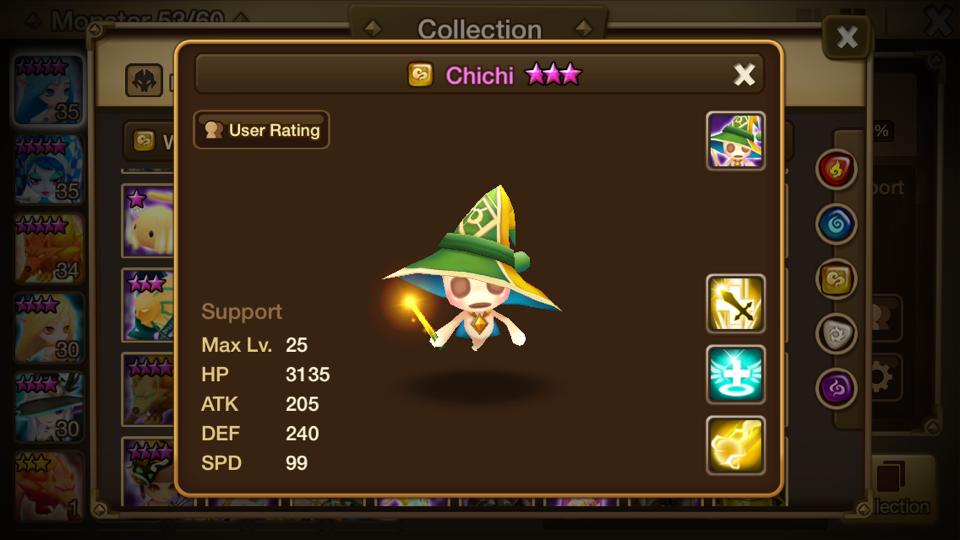 Chichi, the wind Howl, is an adorable two-star monster. You can get her (him?) from Unknown Scrolls, the shop, her Secret Dungeon, the Temple of Wishes, and Social Summons.

The best way to get her is using your regular methods of summoning fodder, or hunting the shop. I actually wouldn’t recommend using her Secret Dungeon this time, because it’s not worth the waste of energy when you can just get her from unknown scrolls or the shop.

This Howl’s just good as Lulu skillups. Her third skill attacks an enemy and recovers everyone by 50% of the damage. However, her base attack, after being six-starred, awakened and maxed out, is an abysmal 516, and she’s a Support monster. Lulu would be better, so if you’re not fusing Jojo, use Chichi to skill up one of Lulu’s skills. 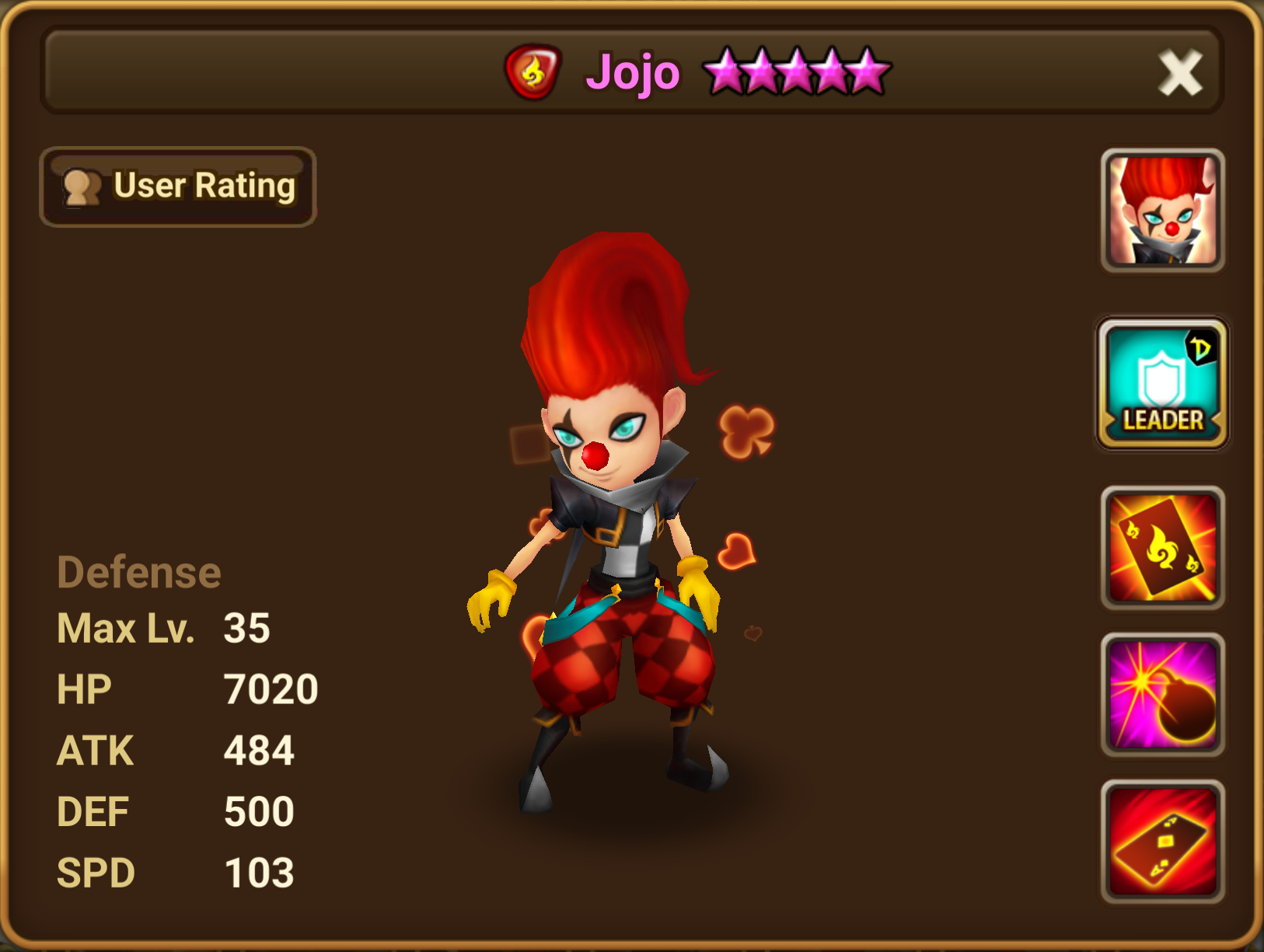 Awakened Icon[/caption] Am I the only one here who grew up on Jojo’s Circus? I mention this because to me it’s weird whenever I see the name Jojo, because I think back to Jojo and her pet, Goliath; but that’s beyond the point. To fuse Jojo, you’ll need to awaken all four material monsters that you have collected (make sure that they’re four-starred and maxed out) and then get 100,000 mana.

The poor Joker boy is confused, let me start with that. He says that he’s a Defense-based monster, but there are two things wrong with him that makes him a bad Defense-type monster: If you don’t have a bomber, though, I suggest that you fuse another copy of him if/when you get Seara or Carrack. For now, keep him around only to fuse Sigmarus, because the next piece of our puzzle is Arang!]]>