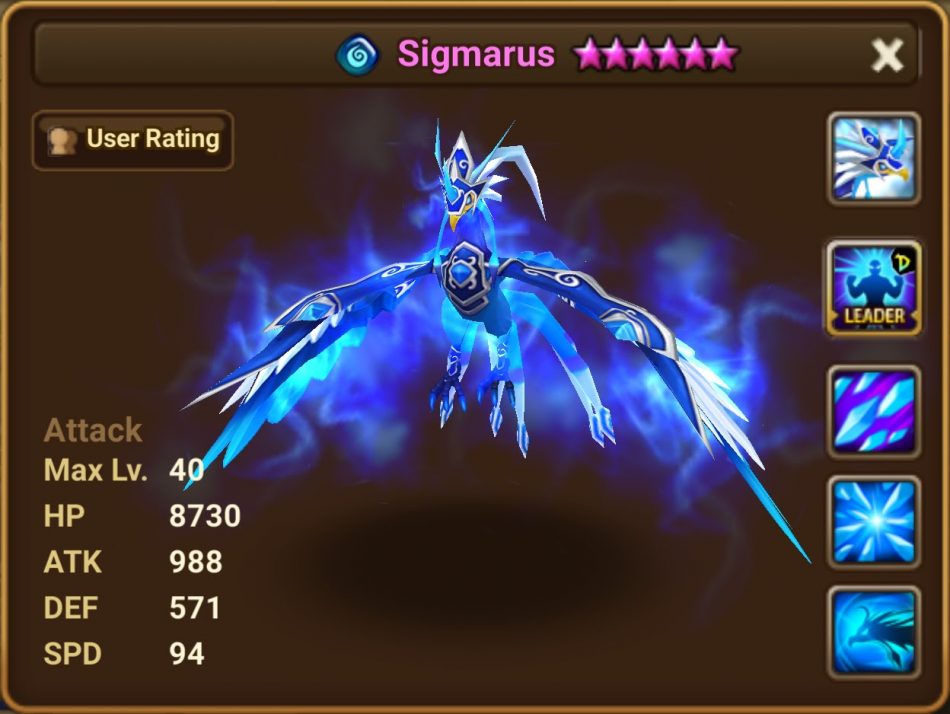 <![CDATA[<em>It’s time. You’ve acquired everyone needed for fusing Sigmarus, and now it’s time to fuse your water chicken! Though he’s not needed like Veromos is, he can make DB10 a heck of a lot easier; we’ll get to your starter DB10 team later in this article. Anyway, in order to fuse Sigmarus, you’ll need all four monsters (all of which awakened, five-starred and at level 35) and 500,000 mana. 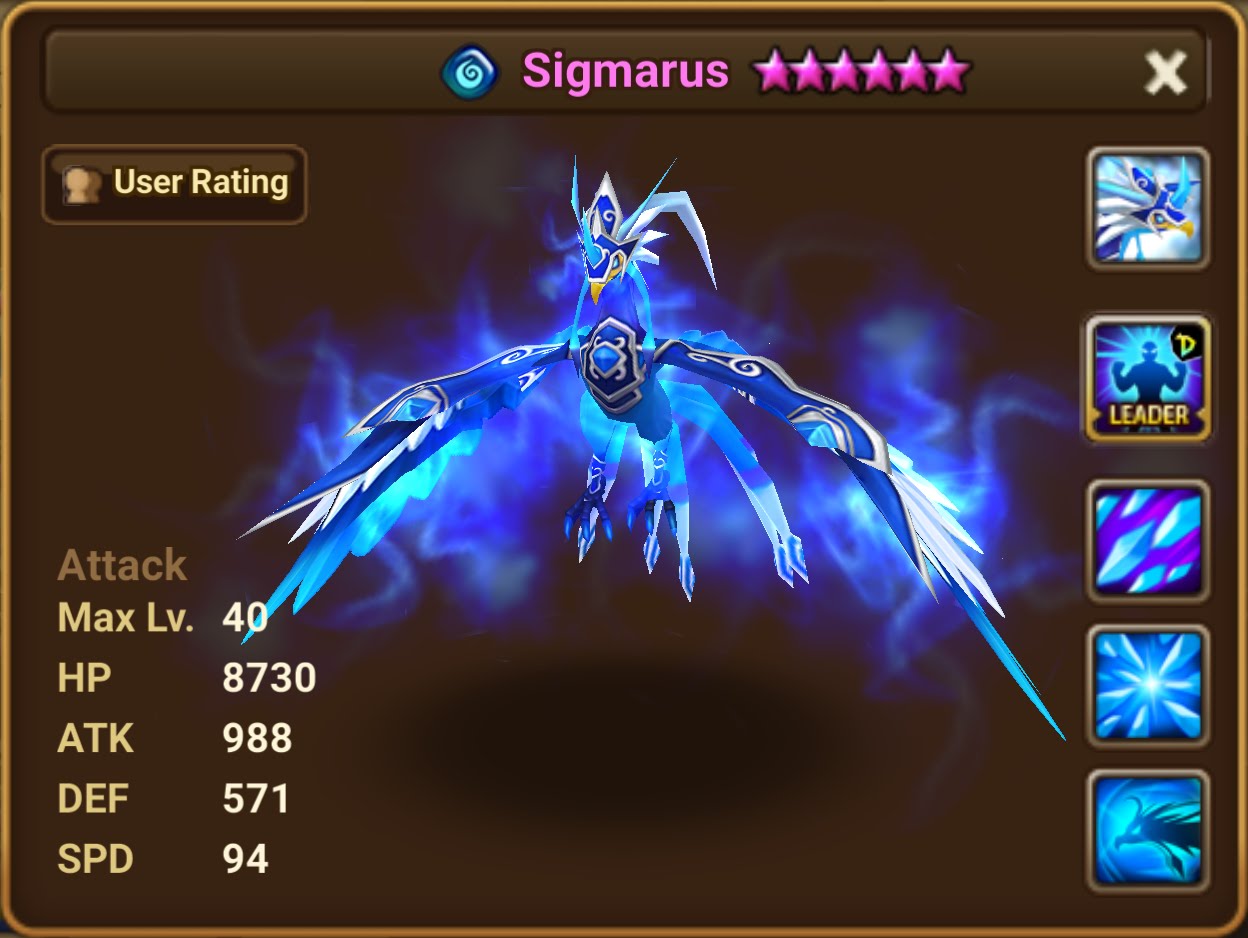 If you’ve gotten to this point, I assume you’ve completed the fusion process and had the announcement of your fusion pop up in chat. Congratulations! Fusing a five-star monster is always a big deal; even if they’re not as liked as most monsters, like Jeanne. Fusing the monster is one part, however; actually building them to be usable is a whole other part. Luckily for you, I’m here to talk about the best builds for Sigmarus! I’m going to first throw out that I’m sort of mid-game (regularly clear ToAN, 1:50 GB10 team, and stable 2:30 DB10 team, ToAH70, about to fuse Xiong Fei) and then we’re going to do a breakdown of Sigmarus’s skills. This is needed so we can talk about how awesome Sigmarus is and so we can get a better idea of what runes to use on him and what stats to prioritize.

Arcane Blast – Attacks the enemy with a mysterious energy and stuns them for 1 turn with an 18% chance. This is the skill all Phoenixes share. There’s nothing special about it, but let me say it actually does quite a bit of damage. Frozen Orb – Attacks with an extreme chill and freezes the enemy for 1 turn if you get a Critical Hit. With massive single-target damage and a 1-turn freeze if you get a critical hit on this skill, we can agree that Frozen Orb is definitely one of the better second skills out there. Ice Volcano – Attacks all enemies with an exploding volcano, inflicting damage based on their MAX HP and decreasing their Attack Power for 2 turns. This is the main focal point of your Sigmarus. This is an AoE skill that deals damage off of your enemy’s max HP, and will put attack break on them for 2 turns. This can be what keeps your monsters alive during a particularly dangerous stage – namely, stage 3 and the boss. Now that you know what exactly his skills do, you’re probably going to ask yourself: What do I use on him? Early-game builds for Sigmarus are usually Fatal and Blade, so that he can get as much Attack, Critical Rate and Critical Damage as possible. Unfortunately, my own Sigmarus does not have as much Critical Rate as is needed for him. This is mostly due to the fact I have him on a broken set and Fatal runes, so I would highly advise you don’t use a broken set unless the situation truly calls for it (i.e. you don’t have any better runes) The three main stats you should achieve for on your runes, for slots 2, 4 and 6 should be ATK%/SPD, CRIT DMG%, and ATK%. You want to get at least 80% CRIT Rate and 150% CRIT Damage, and then you can focus on as much ATK as you want. Personally, though, I recommend at least +1000 ATK on Sigmarus, as he’s up there in the top five highest base attacks in the game.

Definitely six-star him. When he’s six-starred, maxed and awakened, his base attack is 988! It also makes him less squishy, so that he can survive the trash stages easier. Even though he’s a water element, he’s usually the first one to die whenever I do DB10 myself. In fact, I’d highly recommend that everyone in your DB10 team should be six-starred. The quality of your stats needs to be much higher than for GB10, because DB10 is a much more difficult dungeon. Now, instead of the only threat being the boss, the threat in DB10 is stage 3 and the boss. I’ll explain later on. You should also make sure to max out all of your monsters before you even think about starting to do DB10. I mentioned in my post about fusing Veromos that it’s OK to have Veromos at around level 30 or so when six-starred when starting GB10, but now you definitely shouldn’t follow that advice for DB10. As I just mentioned, the quality of your DB10 stats should be much higher than your GB10 stats.

Sigmarus is one of those monsters where you don’t need to Devilmon him, but if you did, it would be extremely helpful. At the very least, try to max out Frozen Orb and Ice Volcano. When fully skilled up, Frozen Orb has a cooltime of only two turns, and Ice Volcano’s cooltime is 4 turns when skilled up. 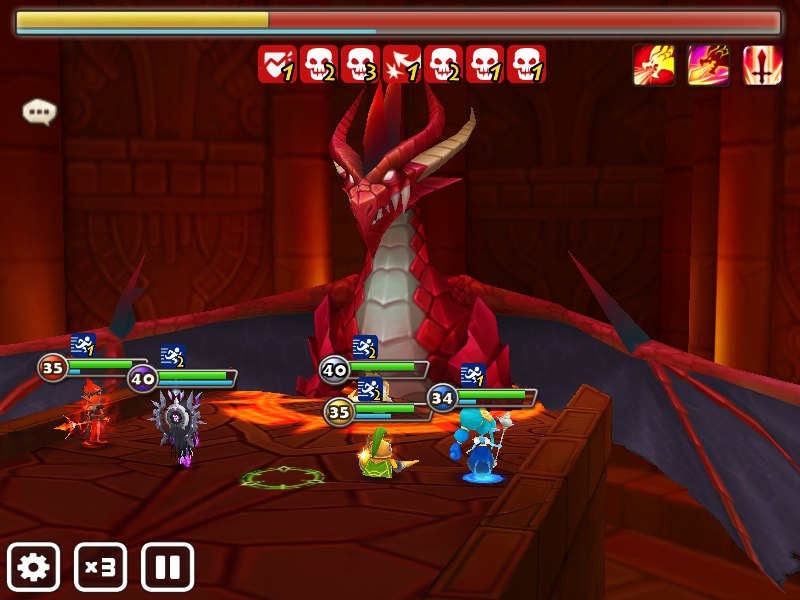 Alright then! You’ve finished making sure you have at least somewhat optimal stats on your Sigmarus, and he’s awakened, maxed out and six-starred! What do you do now, you may ask yourself? DB10 is in the horizon for you! We’re going to talk about your DB10 team and the stats on your monsters for said team. Please note that all monsters who require accuracy (e.g. Veromos for his continuous damage, Megan for her Toad Poison, etc.) needs 55% accuracy, as that’s the cap for the boss. I’ll add “Needs accuracy” at the end of my description for each monster that does so that you know which monster to put 55% accuracy on.

Veromos – You’ve worked hard on fusing Veromos for about a month or so. I don’t blame you; this guy is essential for beginning the game. He’s very useful, though, because of his passive cleansing and stable source of continuous damage. By now, he should still be on Swift, and his speed should be at least 200 speed total. Needs accuracy.

Sigmarus – The guy who you’ve been working so hard at to get! Unless you have Verdehile (more on him soon), Sigmarus should be leader, as he has a 44% HP increase, instead of Veromos’s 33%. We’ve already mentioned the runesets for him, so I won’t go on for that. He should go second-to-last in your party.

Megan – Megan is the better but slightly more difficult to get version of Shannon. She’s the water Mystic Witch; a three-star monster, and her purpose will be stripping the Immunity off of the boss, buffing your team, and being a backup source of DoTs. She should be on Swift + Energy/Focus, SPD/HP%/HP%, with a minimum of 20k HP total and at least 200 speed. She should be the first to go in your team so you can apply buffs to them. Needs accuracy.

Belladeon – Both Veromos and Belladeon are essential for your starter PvE content, which includes GB10, DB10 and ToA. After you farm DB10 for a while, you can switch Bella to Violent runes, but I wouldn’t recommend it; just keep her on Swift runes until further notice. Bella should go after Megan, to apply defense breaks, buff steals and heals when needed. Needs accuracy. It’s around now that your fifth member of the team depends on you. There are really only three choices if you’re going for the “standard” DB10 start team, though. These selections are…

Spectra – Spectra, the fire Griffon, is not only really good in Trial of Ascension, but he’s actually not that bad in a starter DB10 team.  Let’s just throw out real quick that he has one of the highest base speeds I’ve seen so far; at a whopping 126 when awakened; not even counting Speed Towers or runes yet. His second skill, Special Assault, though he loses 10% of his current HP, deals damage base off of the enemy’s Max HP. Spectra also brings attack bar decrease to the table with his third skill; which decreases all enemy’s attack bar by 30% and decreases their attack speed for two turns. Needs accuracy.

Verdehile – This fire Vampire boi is the only one of the three fifth members that I recommend that isn’t either obtainable or you already have. Verdehile, a four-star monster, is the best monster for your fifth member, but that is only if you have him. This is because of his passive when awakened, “Boiling Blood” which increases the attack bar of all allies by 20% if he gets a Critical Hit; couple that with the fact his first skill hits twice.

Verdehile also has a 28% speed increase leader skill, so if you have him, you should definitely put him as the leader instead of Sigmarus. Speed is everything, but Verdehile should go last or second-to-last in your DB10 team. This is because if he goes first, the team will get an unnecessary attack bar increase that will go to waste in the long run. He should have a minimum of 160 SPD. Of course, you should put Verdehile on 100% CRIT Rate so that he’s guaranteed to at least give the team a 20% attack bar buff. A good rune set for him would be Violent and Blade, with SPD/CRIT Rate%/HP%. I wouldn’t recommend putting Devilmon into him, though; as when his second skill, Noble Agreement (a one-hit attack) is maxed out, he’ll use it more.

Lapis – As of her latest buff, the water Magic Knight Lapis has been seeing a lot more use, and now she’s apparently even a good choice in your starter DB10 team. Lapis, a four-star monster, brings two AoE attack bar decrease skills and defense break to the table, along with being a water element. Combine that with the fact that we all get a copy of her after we clear Mt. Siz for the first time, and now you can rejoice. One of her downsides is that she’s very slow (an abysmal 90 base speed…), so you’ll have to be especially persistent in trying to rune her fast. Try to get her to at least 170 speed, which shouldn’t be that difficult – one six-star, maxed out Slot 2 SPD rune gives +42 speed, a little over half of the speed you need to get her to 170. She needs to go last in your team, but still go before the boss, so this way she can apply her attack bar decreases and defense breaks. I recommend either Fatal/Blade or Despair/Blade, with SPD/CRIT DMG%/ATK%. Needs accuracy. The turn order of your DB10 team should be Megan → Belladeon → Veromos → Sigmarus → your +5. DB10 is one of the more difficult dungeons, but when you get the hang of it, you’ll finally gain regular access to Violent, Revenge, Endure, Shield runes and more. I’m Sara Ann, and I’ll see you in the next article.]]>