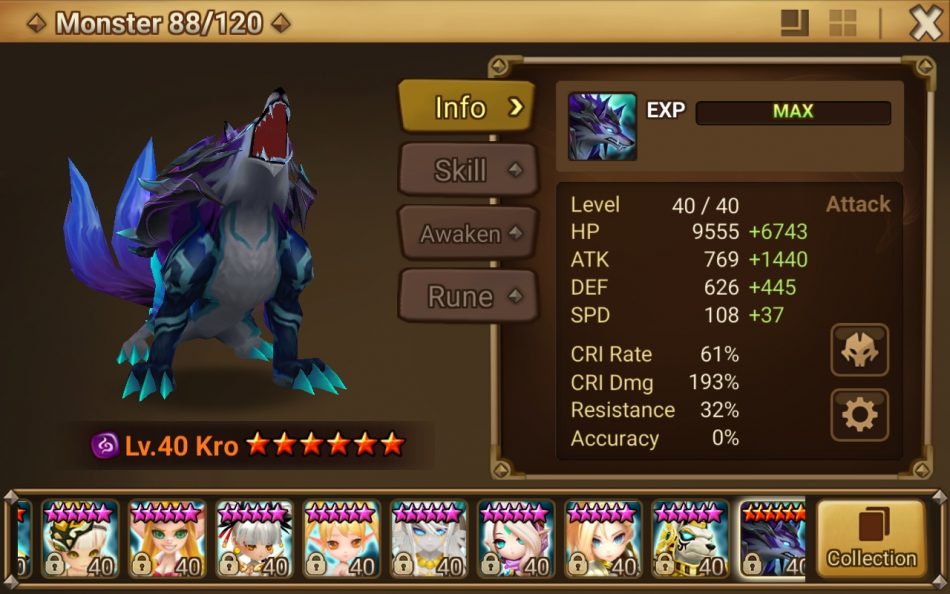 <![CDATA[Sorry this took me so long to get out, but we’re back again for Part 2 on <em>An In-Depth Look on my 20 NEWEST Six-Stars! We’ll be reviewing how I feel about this newest batch of six-stars I’ve made, where I use them, and whether or not I think it was worth it. With that said, let’s get on with it! 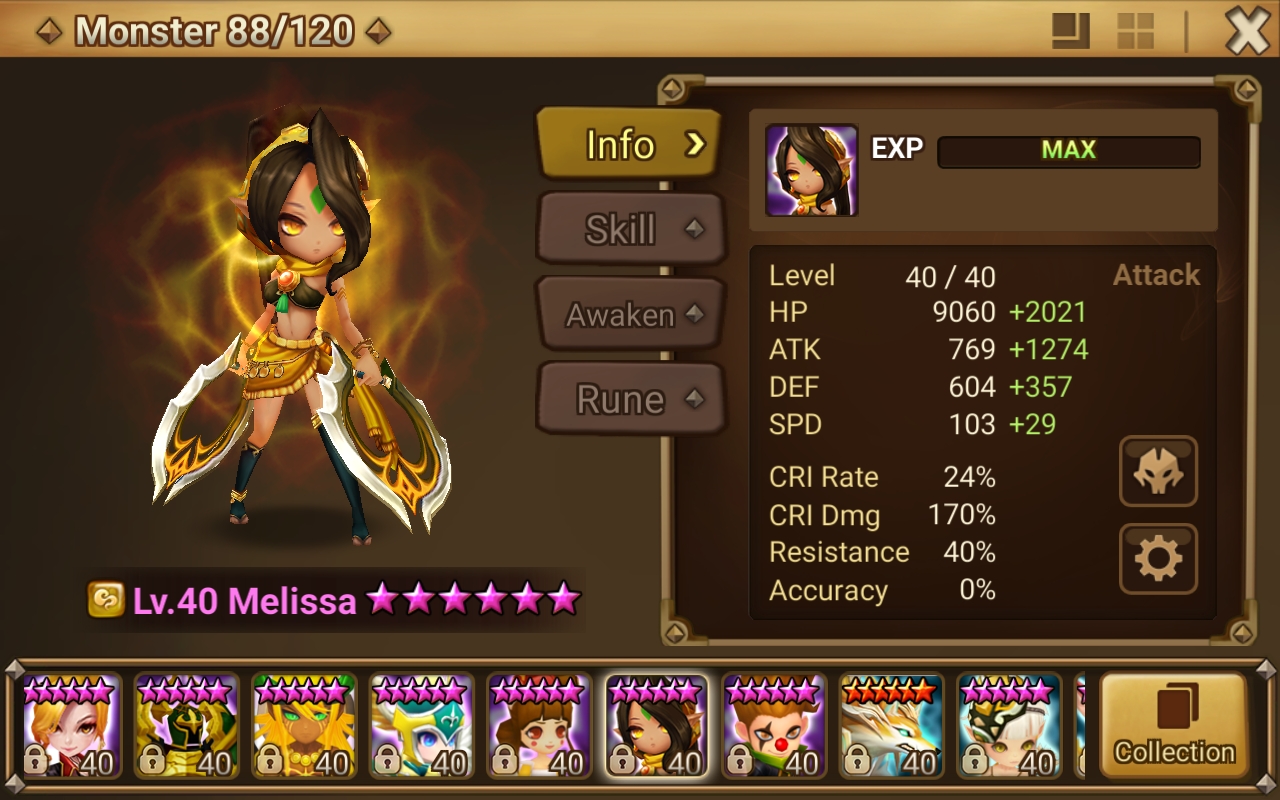 Rating: 4/10 Yeah, I really shouldn’t have sixed Melissa, honestly. She’s probably the weakest of the Chakram Dancers nowadays, right next to nerfed Shaina I still miss Shaina darn it they could’ve just taken out the Arena speed lead and she’d be properly nerfed- ANYway, Melissa’s skills are nothing special. Like all the other Chakram Dancers, she’ll always attack with a Boomerang Warrior if they’re on her team, and the Boomerang Warrior will get certain perks if they’re taken along with Melissa. In this case, the perks come from Melissa’s third skill, Massacre Dance. She’ll attack an enemy twice, ignoring all damage reduction effects (barring passives, such as Darion’s Knighthood), and will increase the damage dealt by 10% based on each beneficial and harmful effect on them. The Boomerang Warrior on the team will also ignore damage reduction effects when pulled along for this skill. So you’re probably thinking “Oh, wow, Melissa actually sounds pretty good!” And I thought that too; I six-starred her to get some extra damage in the Ice Rift and to be a Rina killer. …It turned out that she didn’t do that good of damage, even on decent runes that had more crit rate than you see in the picture and bringing Sabrina along. Would not recommend sixing her unless she’s the only Chakram you have, and even then I’d reconsider it. Runes: like three Fatal runes and a Blade rune, I’ve stripped some runes off for better mons 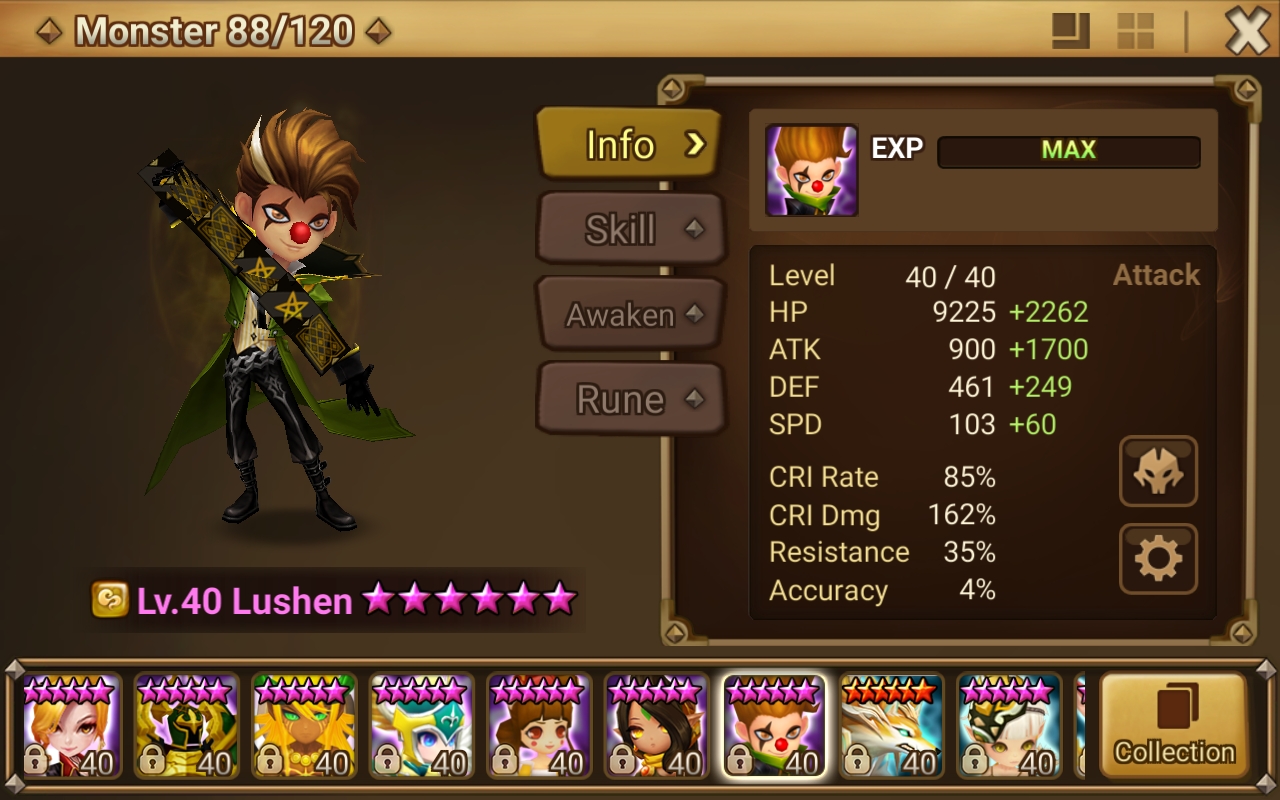 Rating: 7/10 WE LIVE IN A SOCIETY, GAMERS RISE UP- Yeah, I got two Lushens now! The best thing about being a Twoshener is that you can build both Lushens on different builds, and they’ll still be really good on both builds. In my case, this is my Swiftshen, while my main one is the Fatshen. I mainly use this Swiftshen in GB10 with the Fatshen, though he has gotten some use in Siege Wars, Guild Wars, and even in the Arena. Double Lushen is a thing, y’all, and it’s a thing I would highly recommend to anyone. If you’ve read how I felt about my main Lushen in my original batch of 20 six-stars, you’d know I feel pretty similarly about the second Lushen too. Runes: Swift + Blade; SPD/CRIT DMG%/ATK% 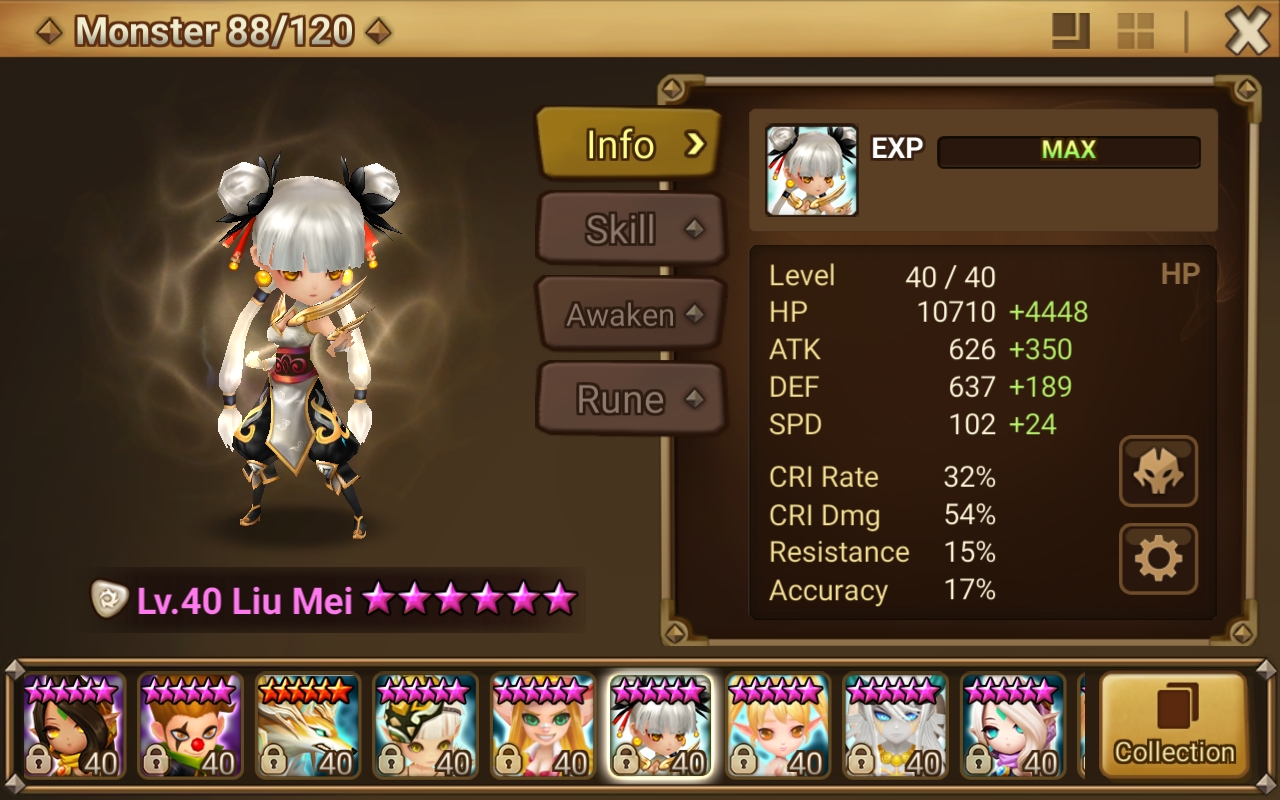 Rating: 3/10 Ah, yes, here’s the big regret six-star of the batch. I really shouldn’t have sixed Liu Mei. I really shouldn’t have sixed Liu Mei. For context, I got her in the Hall of Heroes giving her out, and I saved a copy of her to actually try and use. Her third skill, Light Dragon Attack, randomly attacks enemies 4 times, absorbing 25% of their attack bar for each hit. She also counterattacks randomly whenever her third skill’s on cooldown. She should’ve been good! She really should have! All the Kung Fu Girls operate pretty similarly to each other; their main difference being the things they do on their third skill. In her sister Xiao Lin’s case, the damage she deals goes up with each harmful effect on the enemy she’s chosen. This makes her really good for single-target monsters, like the three-headed dragon Khi’zar Kha’jul. Liu Mei, however… ehhhhh. I tried to use her in Raids and all that stuff, but she’s just not that good. Runes: like two Vampire runes still exist on her right now 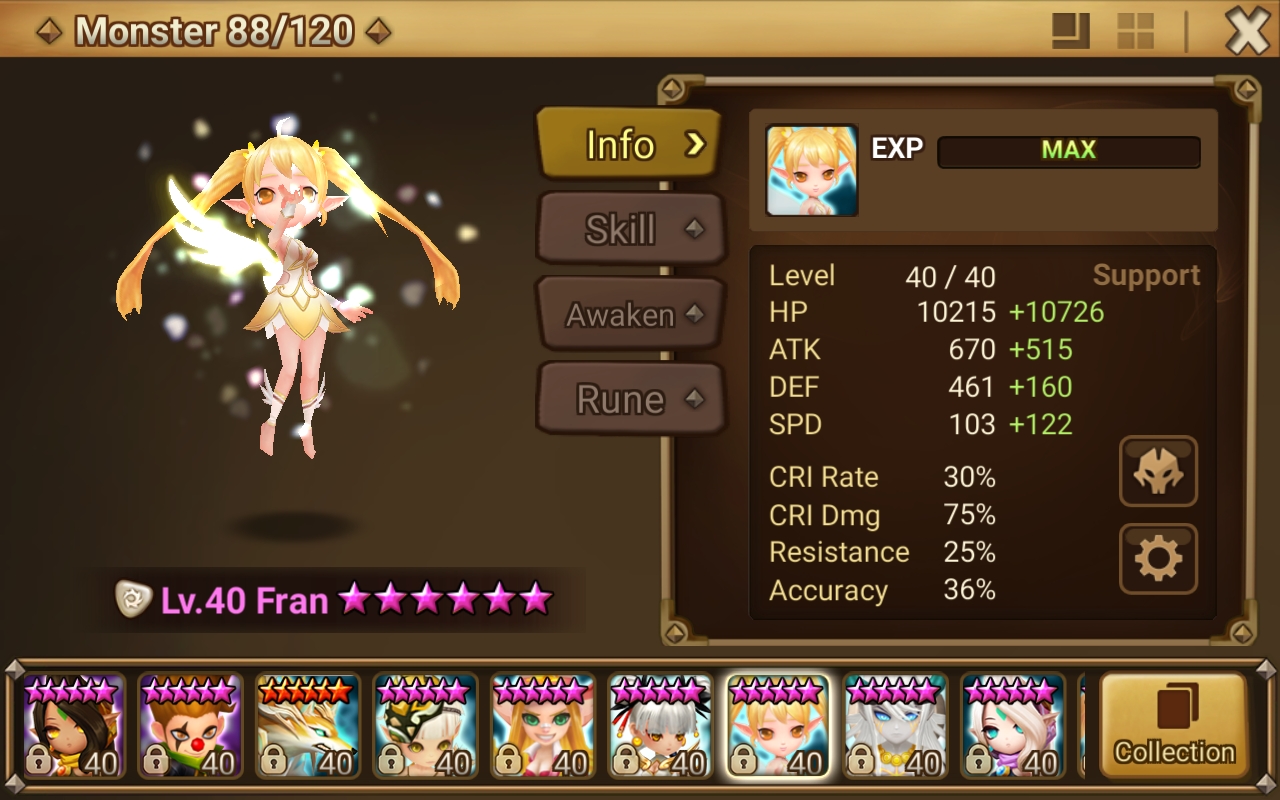 Rating: 7/10 Okay, wow, Fran’s actually legit great! She’s pretty much the real MVP especially for early-game GB10 and stuff. A good semi-fast team most people use her in when breaking into GB10 is something like Sigmarus, Fran, Loren, Arang, and Kro. She’s mostly known for her third skill, Fairy’s Blessing, which heals everyone based on her Max HP, and then plants attack buff and immunity on them for 2 turns. I’d already gotten speedy teams for everyone by the time I got Fran, but she’s actually really good as an F2P unit in RTA. Attack Bar decrease (which is on her first skill) and Immunity is all the meta right now, so it makes sense that, now that she’s freely available to the public, she’s known as a great unit in RTA. I don’t RTA that much, but when I do, there’s a good 7 out of 10 chance that Fran’s getting slotted into my team somewhere. Runes: Swift + [broken]; SPD/ATK%/HP% 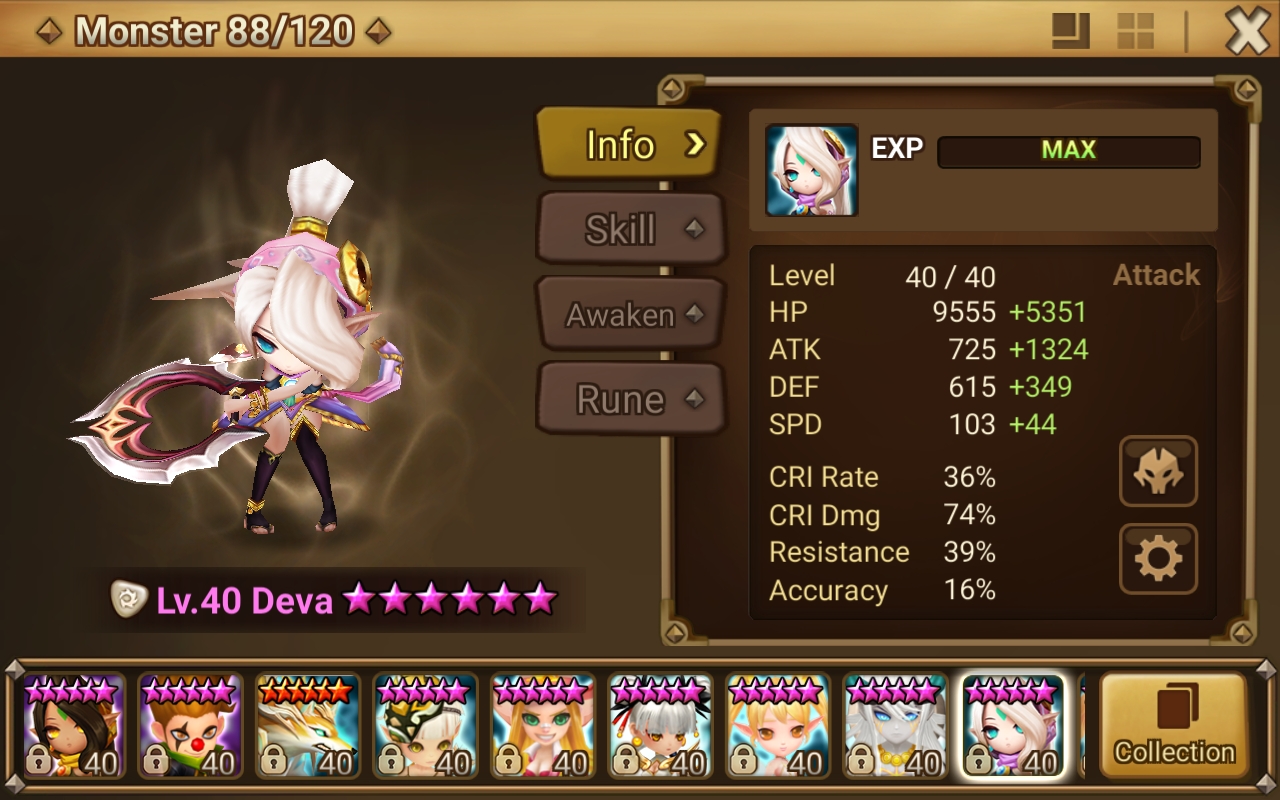 Rating: 6/10 Hot take: Deva is still better than she was before her buff, even if she doesn’t scale on Crit DMG% So basically, Deva’s passive, Silver Chakram, used to be called Golden Opportunity. Golden Opportunity had a 25% chance to ignore defense on all enemy with inability effects (stun, sleep, and freeze). Now, people called her the worst Chakram Dancer because of this. Well, the twins nerf hit, Shaina was destroyed, Martina and Sabrina were slightly nerfed, and Deva’s passive got a buff! Deva’s passive inflicts Continuous Damage for 1 turn with each attack, and then inflict additional damage that’s proportionate to the enemy’s Max HP. The Boomerang Warrior she attacks with will also have additional damage based on the enemy’s HP, too. She sounded really good on paper, and then people found out she doesn’t scale off her Crit DMG%, like monsters like Lyn do. I still use my Deva and put her on an all ATK% build and pretty much ignored the Crit Rate/Damage. I think she does pretty good damage, honestly, even if it’s not the best. Runes: Violent + Blade; ATK%/ATK%/ATK% 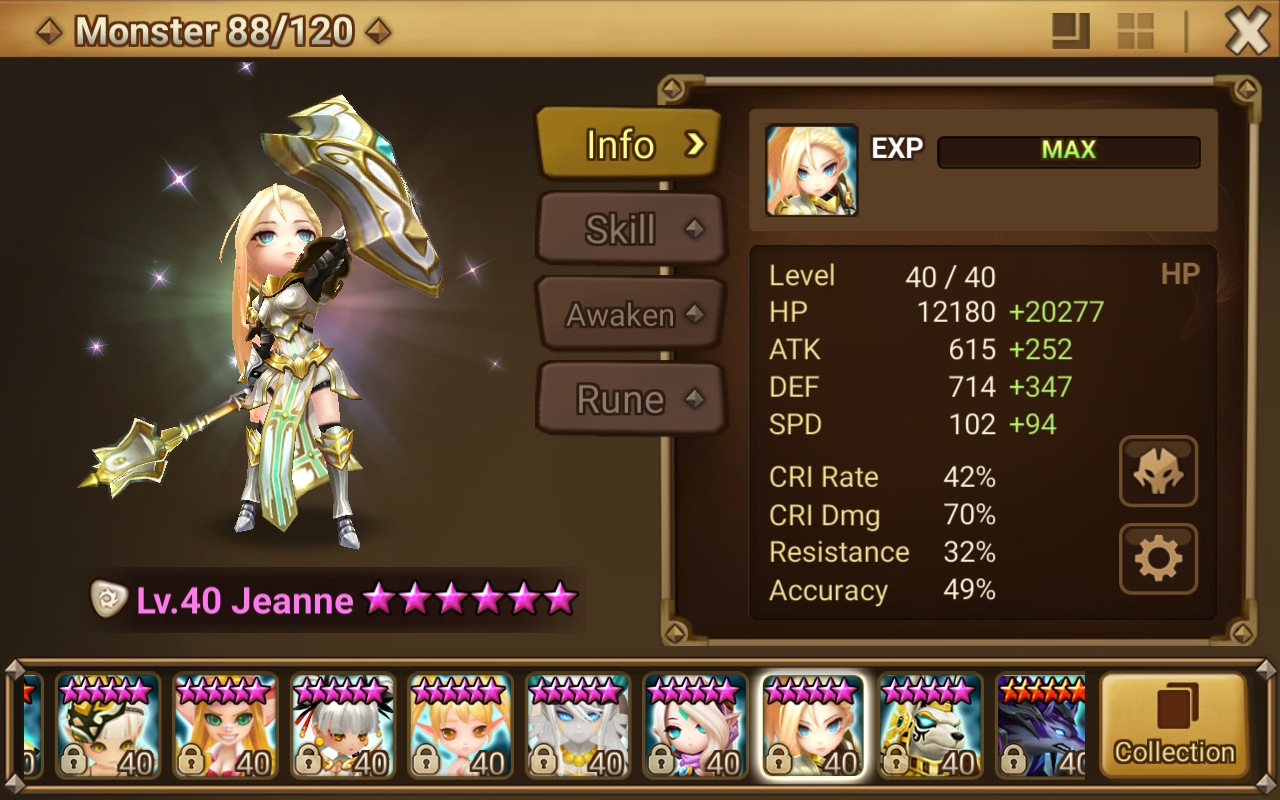 Rating: 9/10 Remember how I said, in the first look of the Paladins, that Jeanne was the worst of them all? I was wrong. She got buffed a few times, and now it turns out she’s actually really good, to the point where she needed a tiny nerf. Her first skill, Justice Strike, will attack an enemy and recover the HP of the ally with the lowest HP by 10%. They actually had to nerf this so that she only healed on her turn (no revenge procs). However, her third skill, Cry of Provocation, provokes all enemies for 2 turns, and then she’ll instantly gain another turn. After her buffs, it turned out she was quite cancerous in RTA, because you could’ve have your cleansers cleanse the Provoke off. They’ll be forced to hit Jeanne until the Provoke is gone, unless you take someone like Veromos and Verdehile into RTA with you. The best part is that she’s fusable, too! Runes: Violent + Will; SPD/HP%/HP% 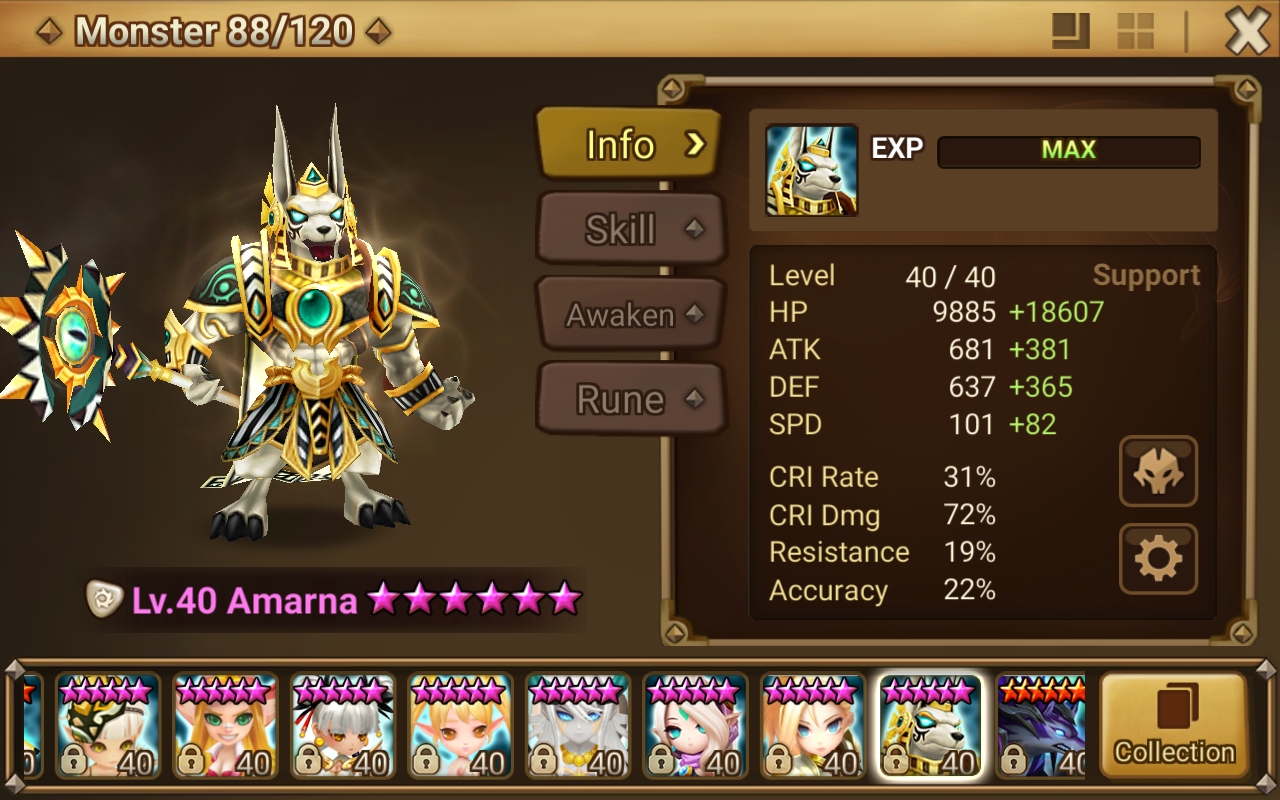 Rating: 11/10 i love my amarna, he’s an actual nat6 with the base stats of a nat4 So if I haven’t mentioned it yet, I’m super lucky to have my Amarna, I love him. He’s my second ever LnD lightning (and it’s kind of depressing that he arrived, like, a few months ago) and definitely makes up for my first ever lightning, Figaro. Who then became Hall of Heroes a few weeks later. The reason why Amarna’s so OP and I love him so much is because of his third skill, Secret of Eternal Life, though the rest of his kit is great too. His third skill heals all allies by 30% of his Max HP, and then removes all harmful effects off of them. However, if any allies are dead, he will revive them all with 30% HP. Yes, that’s right, Eladriel is actually a budget Amarna. The only downside to SoEL is that the skill cooldown will be increased for 2 turns per dead ally – meaning the highest cooldown you can get on this skill is 15 turns. Can I also mention his first skill brings both Healblock and Defense Break, and his second skill brings Brand, hits three times and hits harder as the enemy’s HP becomes lower? Runes: Violent + Revenge; SPD/HP%/HP% 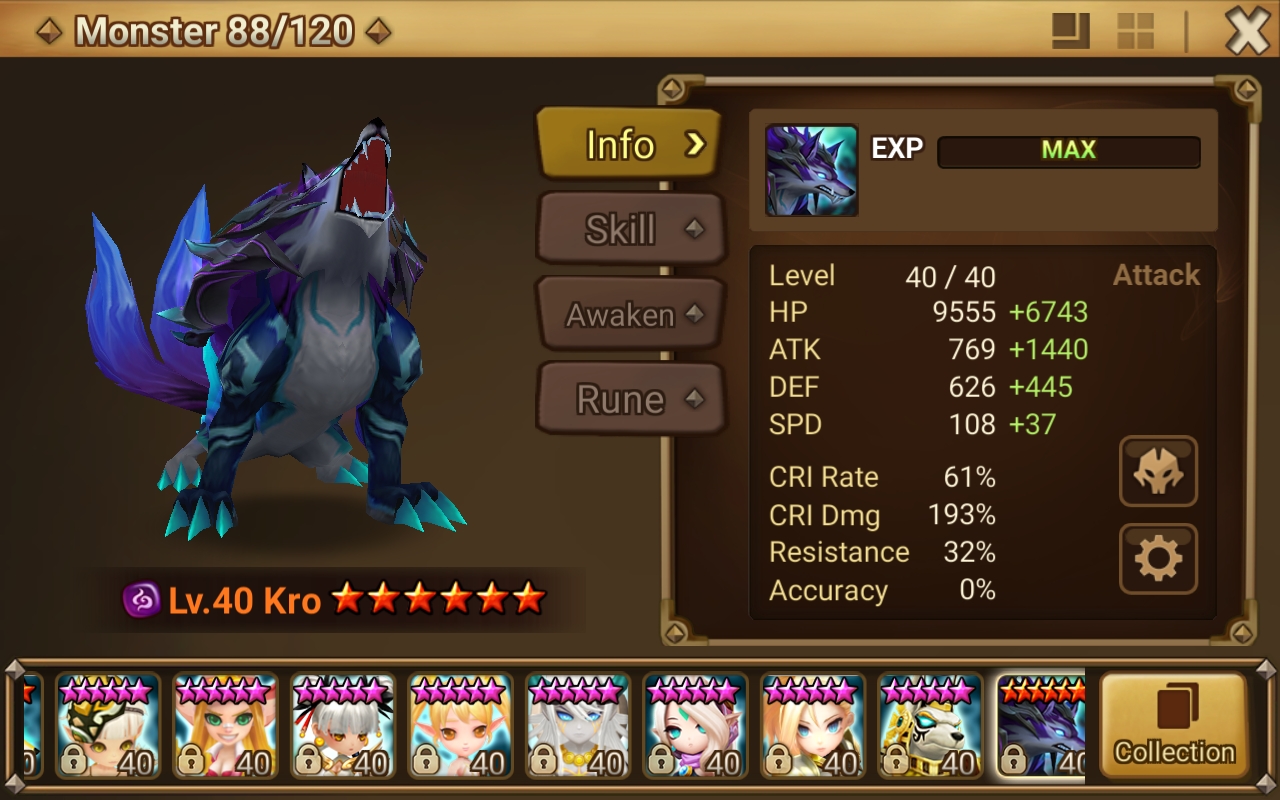 Rating: 8/10 I think, out of the initial batch of 2As, Kro and Elucia got buffed the hardest. Now, Kro’s become an amazing damage dealer that people use in pretty much all stages of the game. Early-game GB10, late-game GB10, Rifts, you name it. He’s soooo good now, and his kit is just overloaded. His second and third skill, Team Up and Scar got buffed big time. His whole “thing” is dealing more damage based on how many harmful effects his enemy is. In this case, with Team Up both he and the ally he chooses will deal more damage based on how many harmful effects are on the enemy. With Scar, he’ll attack an enemy, leaving a Brand for 2 turns. However, the damage increases by 50% per harmful effect on the enemy. As far as I know, Kro’s 2A Scar is the only skill to also gain another harmful effect turn upon skillups (so he can go from 2-turn Brand to 3-turn Brand). Runes: Rage + Blade; ATK%/CRIT DMG%/ATK% 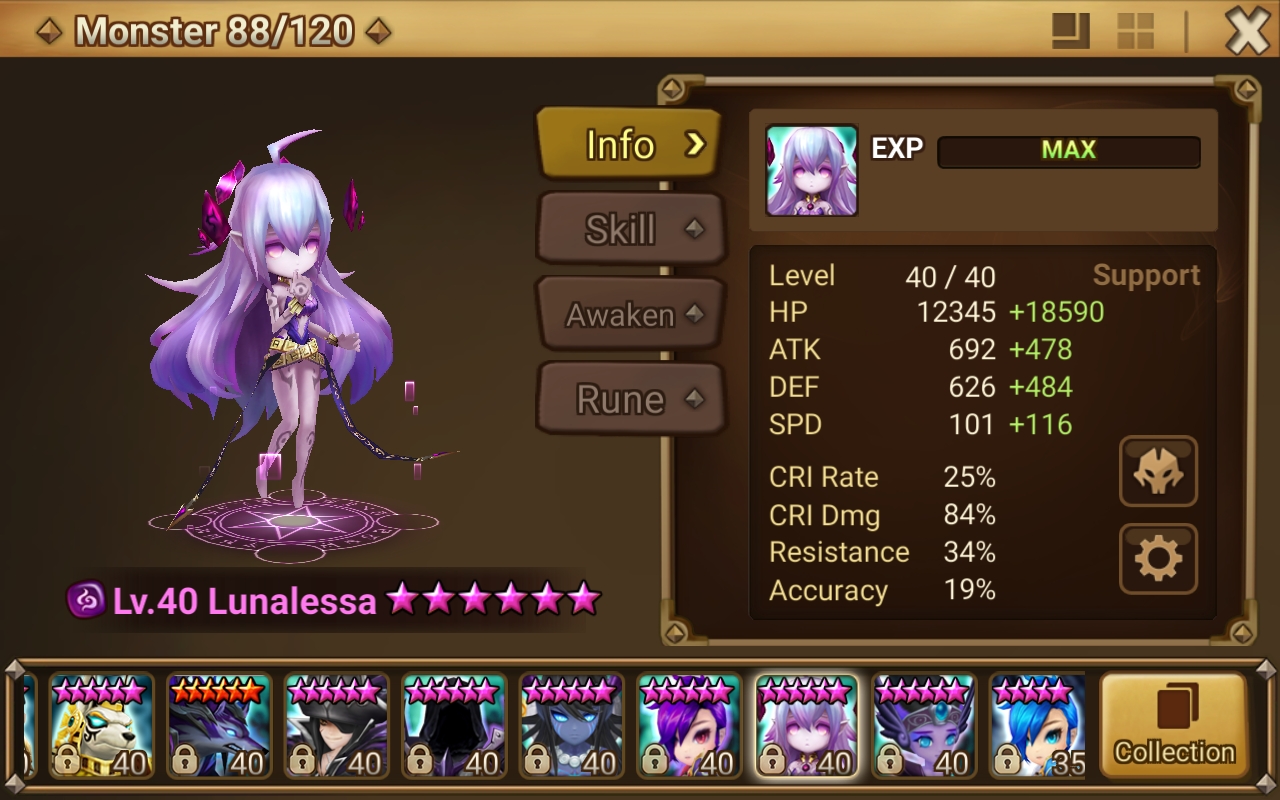 Rating: 6/10 She’s a lot better than her water brother Kaneki surprisingly, but I still don’t use either as much. I built my Lunalessa on the Unbalanced Field path, which recently got a buff. Now, instead of decreasing ally’s cooltimes by 1 and increasing enemy cooltimes by 1, she’ll do both for 2 turns. She also decreases the enemy’s attack speed for 2 turns and the ally speed gets increased for 2. So, don’t get me wrong, the Homunculi are great. Unlike Kaneki, I just… don’t know where to use her. I mean, I know she’s great in ToAH, but I already have a fully functioning team without her. I think I just built her for the achievement purposes of saying “I have both my Homunculi and my life is somewhat stable.” Runes: Swift + Fight; SPD/HP%/HP% 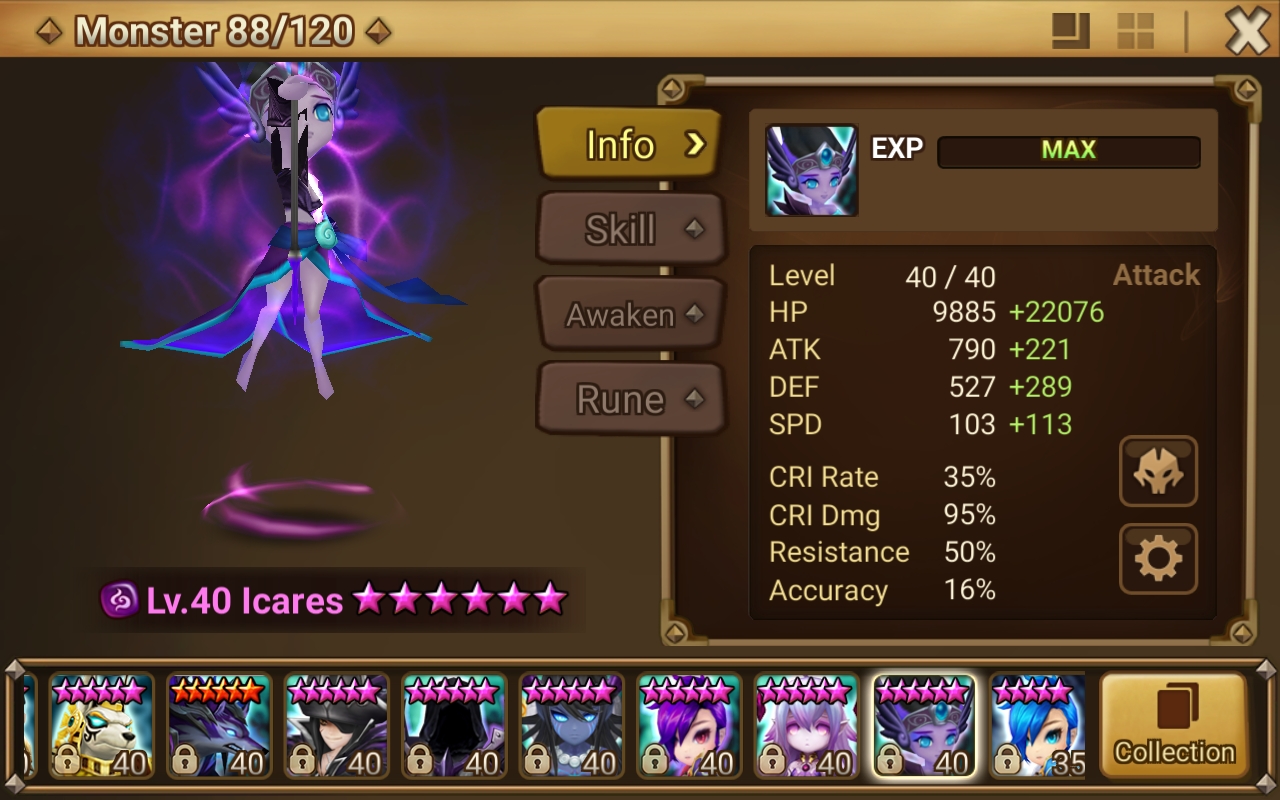 Rating: 7/10 And now we’re going to end this article with my latest LnD lightning, Icares! (at least, she WAS at the time of this picture being taken; I have now summoned a Fei since then and a Lanett today, rip me) Icares is actually pretty good, despite being one of the oldest monsters in the game. Her third skill, Dark Recovery, will steal life from an enemy. The amount of HP she steals is 50% of her own Max HP. If the enemy dies from this skill, she instantly gets another turn. As such, most people rune her up with as much HP and speed as they can, and I’m no different. It’s recommended to get 30k HP or more on Icares just from rune and base stats combined, so this way she can take out at least 15k HP. I use my Icares in Guild Wars with Woosa and Mo Long. Icares softens up (or outright kills) a unit, and Mo Long will then use his third skill on said unit, which usually ends up killing them. Runes: Swift + Energy; SPD/HP%/HP% I hope you all enjoyed this article! It’s been a lot of fun to look back at the six-stars I’ve made; whether they’re good or… not so good. Anyway, I’m Sara Ann, and I’ll see you in the next article!]]>