<![CDATA[Why the heck is no one talking about this? This short film has gotten me more hyped than most of the other stuff I’ve seen! It could be just because I’m someone who loves an exploration of a series I love, but that doesn’t really count as an excuse. I’m gonna try and calm down real quick before we go into the depths of this. Anyway, if you’re out of the loop, Com2uS teamed up with Skybound (the guys who made The Walking Dead) in 2017 to bring the Summoner’s War universe to life! I myself have been obsessed with the SW world, and as some of you know, I’ve written <em>tons of fanfiction about the world. There have been multiple videos on Com2uS and Skybound working together on the official Summoner’s War YouTube channel. Here’s one of those particular videos: [embed]https://www.youtube.com/watch?v=CZ4drU0BtHo[/embed] As you can tell, there’s probably going to be even more of these kinds of things coming along; including comics or even a TV show! This will be a great way to build up the lore and the storytelling of the SW world. If some of you remember right, the story itself of SW leaves…a lot to the imagination. Thankfully we have Skybound for this! Let’s talk about the SW short film itself. It’s called Friends x Rivals, and I know literally nothing about the plot itself (and frankly, no one else does either) apart from the fact that it’s going to be about Durand and Morgana. What we do know, however, is that it’s coming out on February the 11th, 2019! In other words buckle your seatbelts people because WE’RE GONNA BE IN FOR A BIG RIDE WOOOOOO- ahem. This is the poster for the short film: 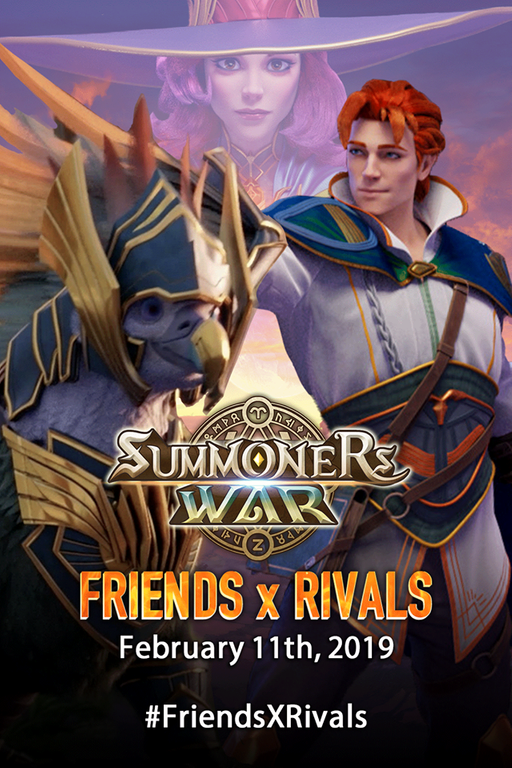 Did you know that there’s also an exclusive preview for the short film as well? It was a few months before they announced the release date of FxR though. The preview is at the end of this particular video, so watch until the end (or just skip to 3:45 if you’re impatient like I was): [embed]https://www.youtube.com/watch?v=On8L-54Uff0[/embed] So that’s what I’m talking about today! I know this is a little different from most of the stuff that I usually write about, but it’s just so exciting I couldn’t help but make a post! I’ll also be writing a review of the short film when it comes out, so you’ll have that to look forward to!

I know I’m friggin clamoring for more, but for now I guess we’re going to just have to stick with this short film, and I’ll just stay here, writing my fanfiction and how-to guides! I’m Sara Ann, and I’ll see you in the next article!