<![CDATA[Arnold is a natural 4 star fire monster. He has a base attack speed of 100 . He is mainly utilized as a tanky bruiser due to his life steal and fixed damage. <table align="center"> 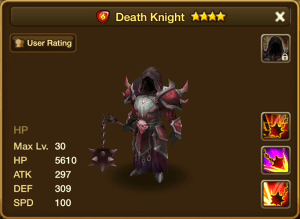 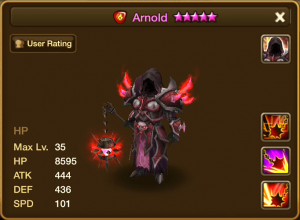 Awakened Bonus: Increases Effect Accuracy by 25%. Leader Skill: Increases the Defense of ally monsters by 25%. Skill 1: Deadly Blow: Unleashes a fatal blow on an enemy, disturbing the target’s HP recovery for 2 turns with a 50% chance.

Skill 2: Deadly Wave: Inflicts damage proprotionate to your HP to all enemies and weakens their Attack Power for 2 turns with a 75% chance on each target. (Reusuable in 4 turn(s)) Skill 3: Extortion: Drains life from a targeted enemy. The stolen HP is equivalent to 30% of your MAX HP. (Reusuable in 6 turn(s)) Rune Recommendations[2/4/6] Tanky Mother***** – Energy x2/Endure(Hp%/Hp%/Resist%) CC focused – Energy x2/Focus(Hp%/Hp%/Resist%) Extra Turn – Violent/Endure(Hp%/Hp%/Resist% or Acc%) Feel free to rate him below and share your experience with other players!]]>