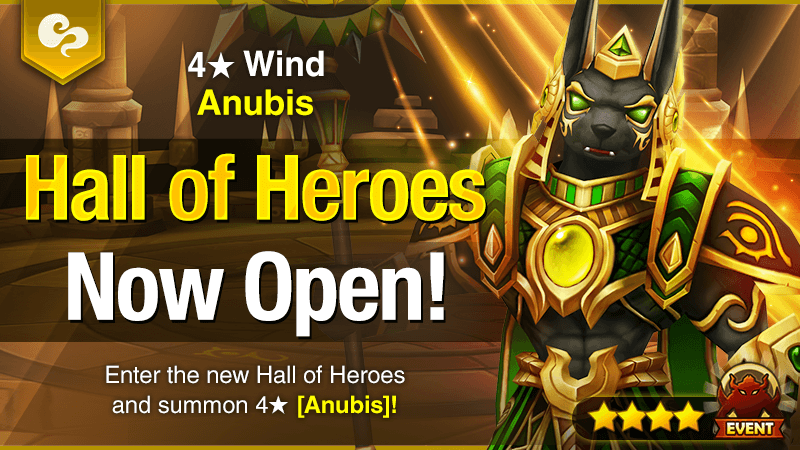 On Wednesday, August the 11th, the Iunu (wind Anubis) Hall of Heroes was announced. Iunu is still very decent of a unit; he’s not just skillups for, say, Amarna, but he’s still good. He’s one of a few 4-star units with Oblivion on their skillset, which makes him valuable for 4-star Siege wars.

I’d say so, yes. At the very least, he can be really annoying in certain situations. His s2 puts both Brand and Oblivion on the target when he’s awakened, and his passive saves him from the clutches of death, reviving him at 30% HP and filling his ATK bar to the max while also giving him a 100% boost in ATK.

The Threat: The threat here’s gonna be Avaris here. Did you know that his passive means that, whenever he kills someone, they can’t be revived, plus he gains Soul Protection? Yeah, I think you can see what the problem is here.

Aquila is a bit of a problem too, but he’s not “prevents enemies from reviving” problem. He attacks all enemies, removing all their beneficial effects, but instantly gets another turn if he succeeds in this. This means he can combo it with his S2, which buffs all his allies with attack buff and crit rate buff for 2 turns. Which… makes it easier for Avaris to get the kill.

The Solution: Avaris. Avaris goes first. No ifs, ands or buts. It’s not fun to have to restart the run right from the beginning because Avaris got the kill. Aquila is secondary in this endeavor.

The Threat: It’s an equal mix between both, honestly, Khmun plants a shield equal to 20% of his Max HP, which lasts for 2 turns, on the ally with the lowest current HP. His S2 also deals damage proportional to his max HP as well. Galleon, in the meanwhile, is one of the best supporters for his ally team that you could think of; his s3 decreases the defense of all enemies for 2 turns while increasing his allies’ attack for 2 turns. It’s deadly.

The Solution: I’d probably say go for Galleon first. Whenever Khmun gets a turn, he plants those shields on his allies, and that’s just not fun at all. So it’s best to take out the supporters before it’s made harder. Khmun you can deal with using relatively little difficulty after that, because his damage isn’t nearly as bad with a lack of defense break.

The Threat: The threat here’s going to be Ganymede. Ganymede used to be absolutely cancer until they nerfed Ventilate to make sure that he can’t use it on himself. His s3 can’t be resisted; he puts the target’s skill on max cooldown (single-target, thank god), and then sets the attack bar of all the enemies to 0. His s2, Ventilate, readies all the skills of a single ally except for himself, but can’t be affected by other cooldown reduction/increase skills.

Clara’s skillset is super annoying. Her s3 attacks all enemies 3 times, removing a buff per hit, and stunned them for 1 turn. When she uses it at full HP, she’ll increase her attack speed for 2 turns.

The Solution: I’d say go for Ganymede. You can’t set his cooldown to the max with Ventilate, S3 is irresistible, basically he’s a massive pain in the rear end to deal with if you don’t just take him out and go for it. Clara, you can deal with as you see fit, but the priority should be Gany.

The Threat: A-MAR-NA. As someone who personally has an Amarna, I can vouch for how much of a goddamn beast he is. His s3, man! His s3 removes all debuffs on allies, revives all dead allies, and heals everyone for 30% of their Max HP. The only downside is that his skill cooldown increases by 2 turns for each ally he revives. But that’s still so strong! All you’d have to do is put Ventilate on him or something and he’s good to go again!

Grego actively harms himself with Amarna in his team, using his passive. He decreases the damage inflicted on him and the amount of HP he gets healed by 50%. However, he does increase his Attack Power by 50% if anyone on the battlefield dies.

The Solution: This stage is definitely going to be a bit of a stat-check stage, because there’s no “focus on this unit, burst down that one” strategy. Kill Grego, and Amarna can revive him. Kill the Amarnas, and Grego gains a massive boost in ATK. My best advice would be make sure no one gets a turn, whether that be by ATK bar manipulation, stun, etc.

The Threat: Did you know that Thebae is the only one of the Anubis family who’s a 5-star mon? Everyone else is 4 stars, and that is including Amarna. Anyway, it’s not really hard to see why. His s2 heals all allies by 30% of the damage he deals, and his s3 deals damage proportionate to his max HP, Brands all allies for 2 turns, and creates a shield on himself for 2 turns. The cooldown of his s3 is also reset if an ally dies while it’s on cooldown.

Lucas depends on his passive mostly, and it’s pretty easy to just work around him. His passive generate a shield equivalent to the damage he deals, increases his crit rate by 30% and increases his damage proportionate to the shield amount he grants on himself, up to 200%.

The Threat: Honestly, it’s mostly Thebae more than anything else. You can’t reset his s3’s cooldown if it’s not on cooldown when people die. Lucas is easy to deal with, because he only generates shields after attacking. The truth is this stage is more of a “see who can kill first” stage.

We’re almost done! We’ve got an Iunu, and two other Anubises by his side. Which element the other Anubises are is always different per floor, but in this case we have a Khmun and an Avaris.

The Threat: In this particular case, all 3 are equal threats. Khmun’s shields are a pain to get through, Avaris can easily burst down one of your units, and Iunu has that stinkin’ passive to worry about.

The Solution: I’d definitely say go for Iunu first. You essentially have to kill him twice, because of the fact that he revives at the moment of death. It’s not fun to deal with, and when you’re at low HP and you think you got him and he revives, it’s like hell.

Anyway, you can pretty much just aim straight for Iunu. No matter which lackey go for, they’re always going to be a problem, but I’d really only recommend bursting down Amarna straight up ahead of time, and only going for the others if they’ve been giving you trouble.

I hope you all enjoyed this article! How many Iunus did you get? I’m on B6 right now. Let me know in the comments down below how far you’re going. In the meantime, though, I’m Sara Ann, and I’ll see you in the next article!