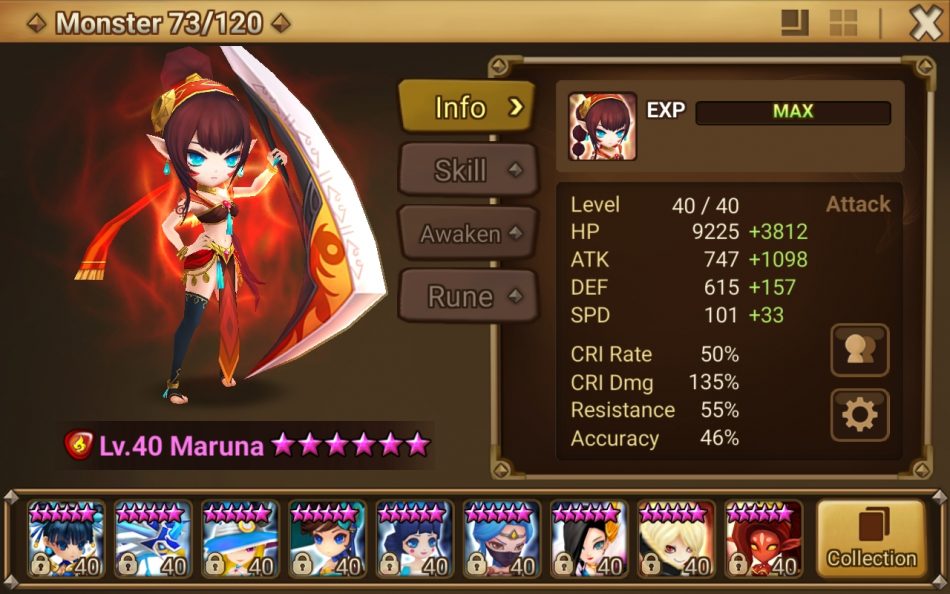 <![CDATA[<strong>If you haven’t seen my article on Shaina yet, click here to be taken to it. Let’s talk about Shaina and Maruna today! This “Building These Units” is actually going to be a two-parter; one part per twin. I recently got a pair of the second-newest units, the Chakram Dancers and the Boomerang Warriors; both fire. In this article, I’m going to talk about Maruna, the fire Boomerang Warrior. As per tradition, I’m going to show you the runes I have on her and her stats: 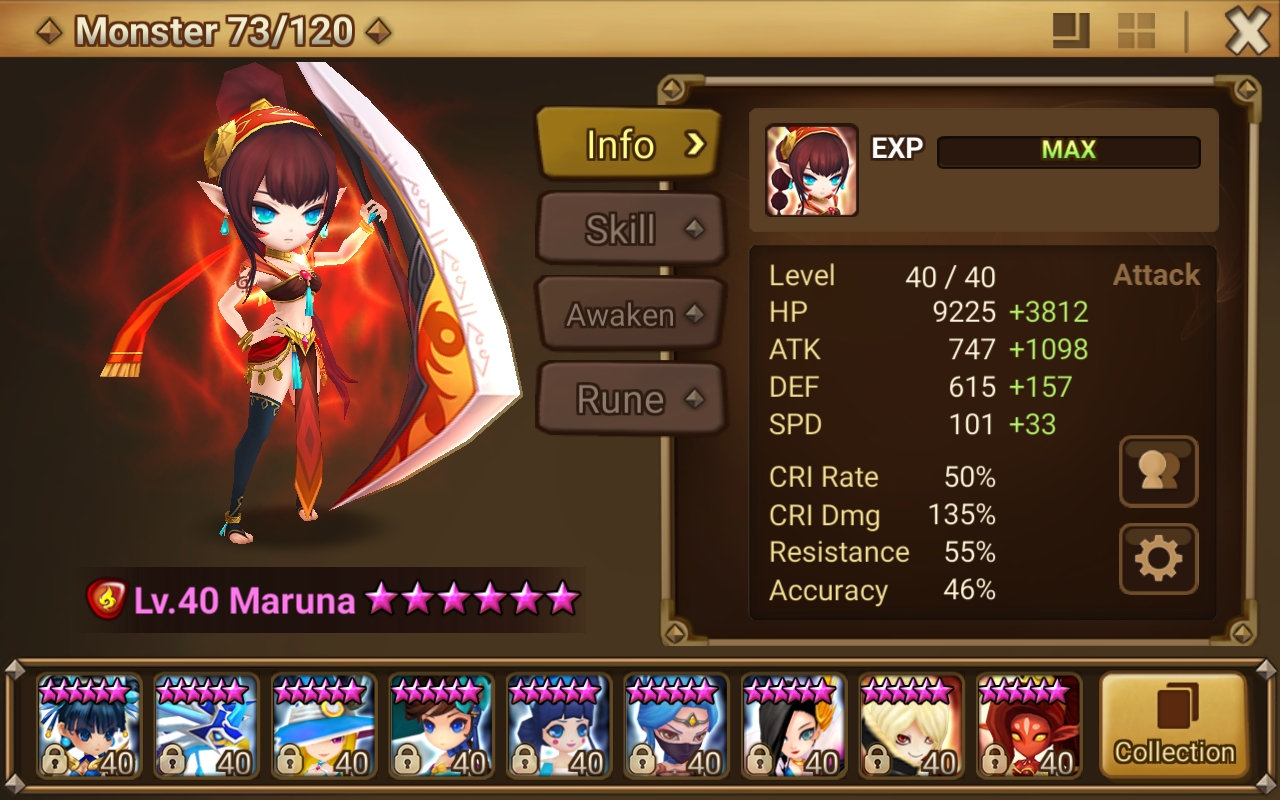 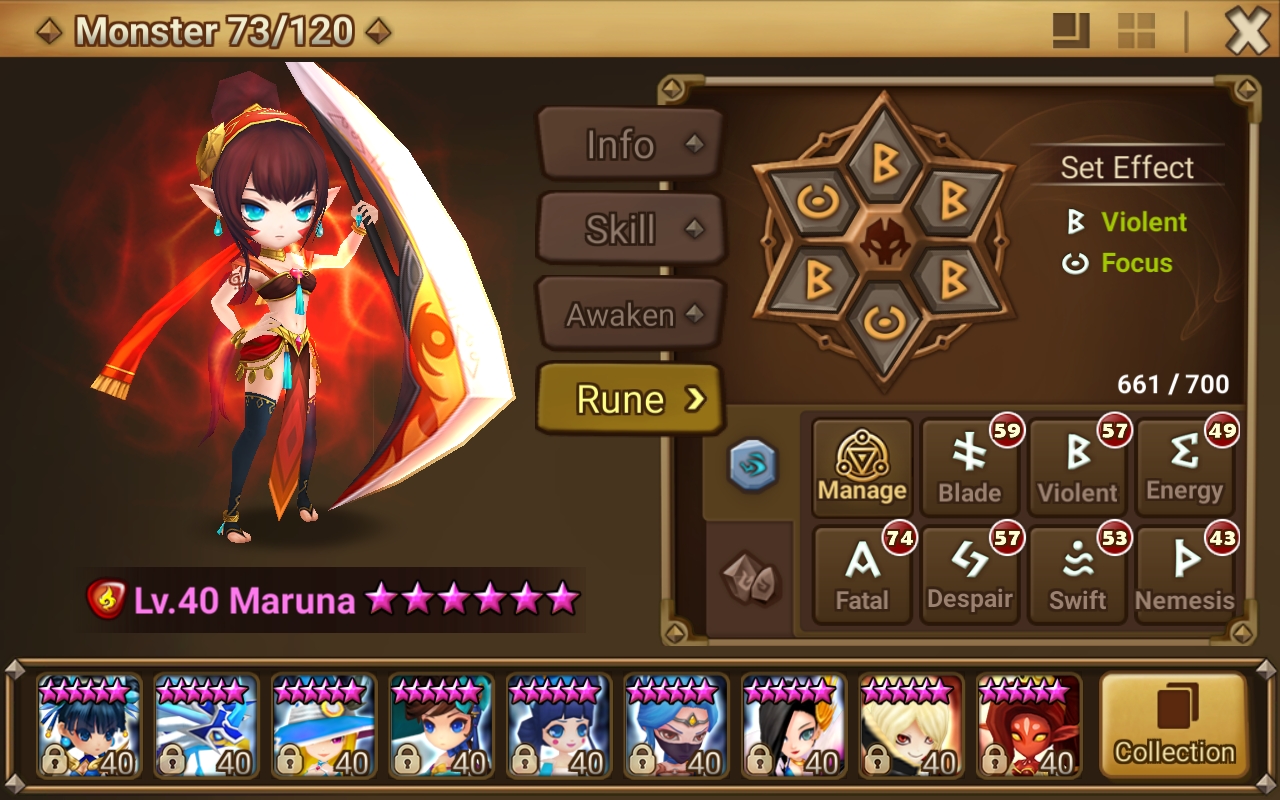 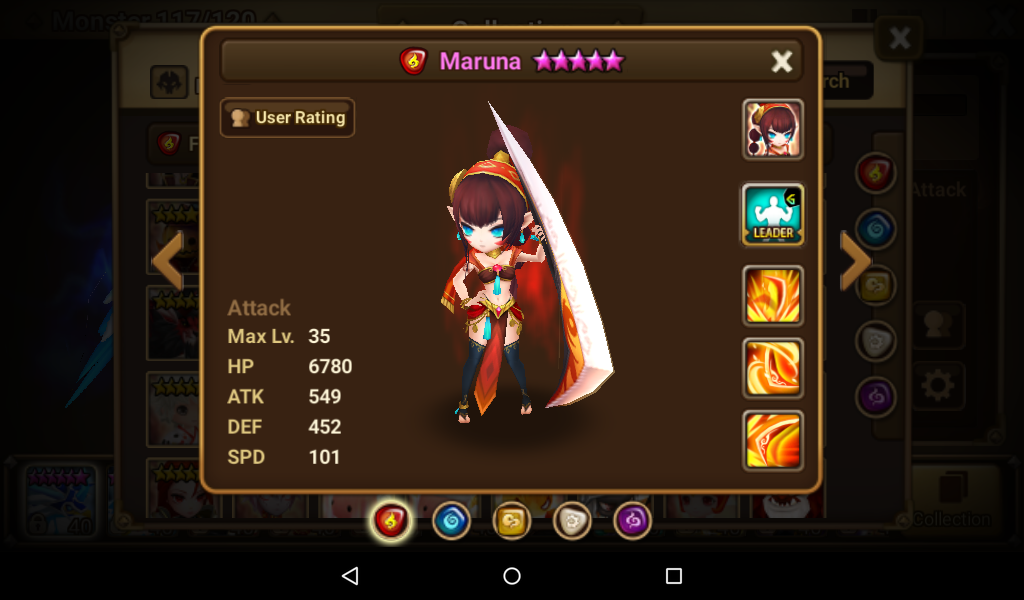 Debuff-wise, Maruna is one of the best of the Boomerang Warriors. She was actually my first ChakBoom when they first came out. (Com2uS is a troll and made me wait 6 months for Shaina. Six months, you guys. By then, I had already gotten a dupe Maruna. I kid you not.) Anyway, Maruna is the ToAH goddess, especially when paired with Shaina – so far, the two of them have broken my previous record of ToAH60. The only reason why I haven’t progressed any further lately is because ToAH87 is Zaiross + two Akromas and I don’t have a Garo. Her first skill is simple: attack an enemy, break their defense for a turn, and if there’s a Chakram Dancer in the team, she’ll attack that same enemy too. Here’s where she starts to get good, though. She has a second skill that the other Boomerang Warriors don’t have; called Boomerang Crush, in which she’ll attack all enemies and have a 50% chance to stun them. Her third skill, Flame Drive, attacks all enemies and stuns them. The monster that a Chakram Dancer attacks at the same time, however, will be guaranteed to stun. That means that if you attack a group of five monsters, and Shaina decides to target a specific in the group, the only way that monster won’t be stunned is if all three attacks lands as a glancing hit, is immune to disability effects, or they have Immunity on. Basically, Flame Drive bypasses the Resistance/Accuracy check with a Chakram Dancer in your team, and that’s kind of awesome. 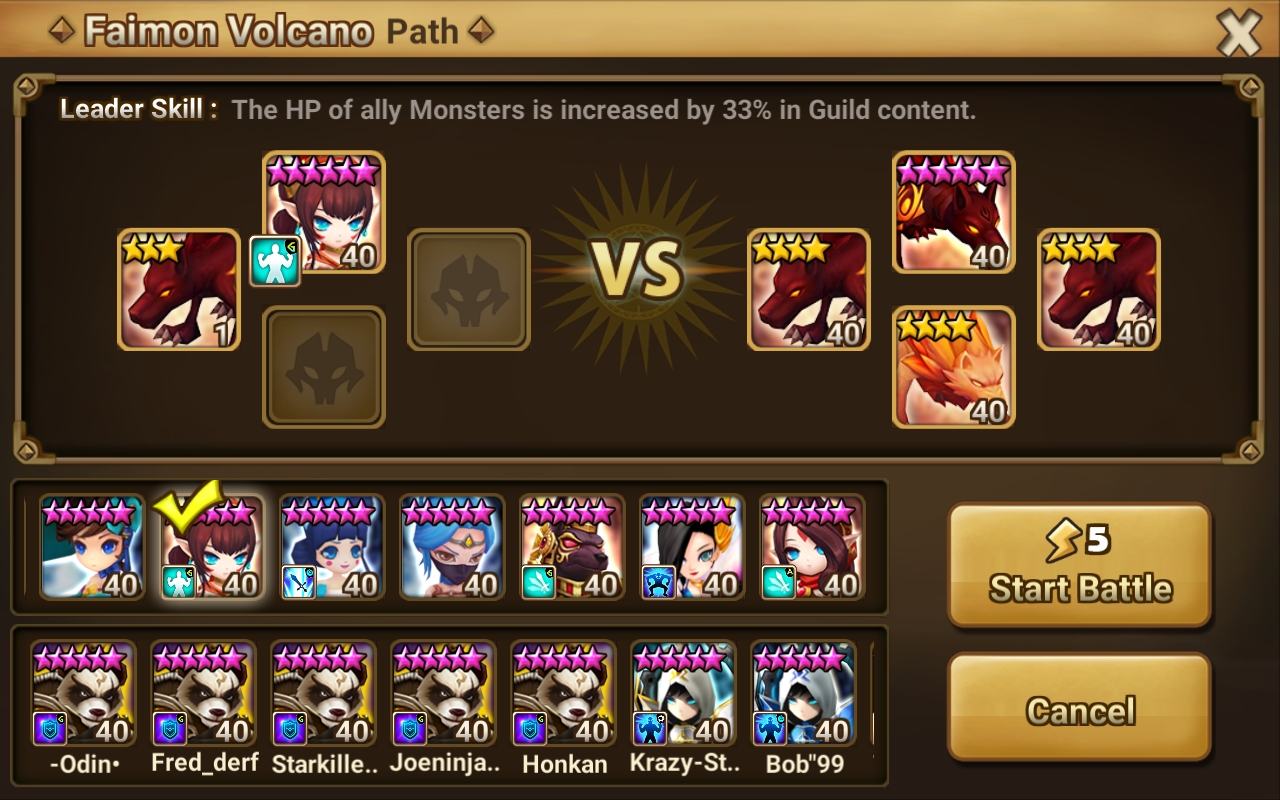 Maruna is best when she’s paired up with any Chakram Dancer, but as a standalone monster she’s pretty good on her own. Because she has two AoE stun skills, I think you can use her as a pretty efficient Faimon farmer on her own. Unfortunately, that’s pretty much the only way you can use her early-game. Because she’s fire, you can’t take her to GB10, and you need to have a GB10 team before you can try and take on TOA. Therefore, you can only use her (as far as I know) in Faimon. If you do find a way to use early-game Maruna, please let me know in the comments! I feel like the best way to use her in early game rune-wise is with Fatal/Blade, all ATK%. 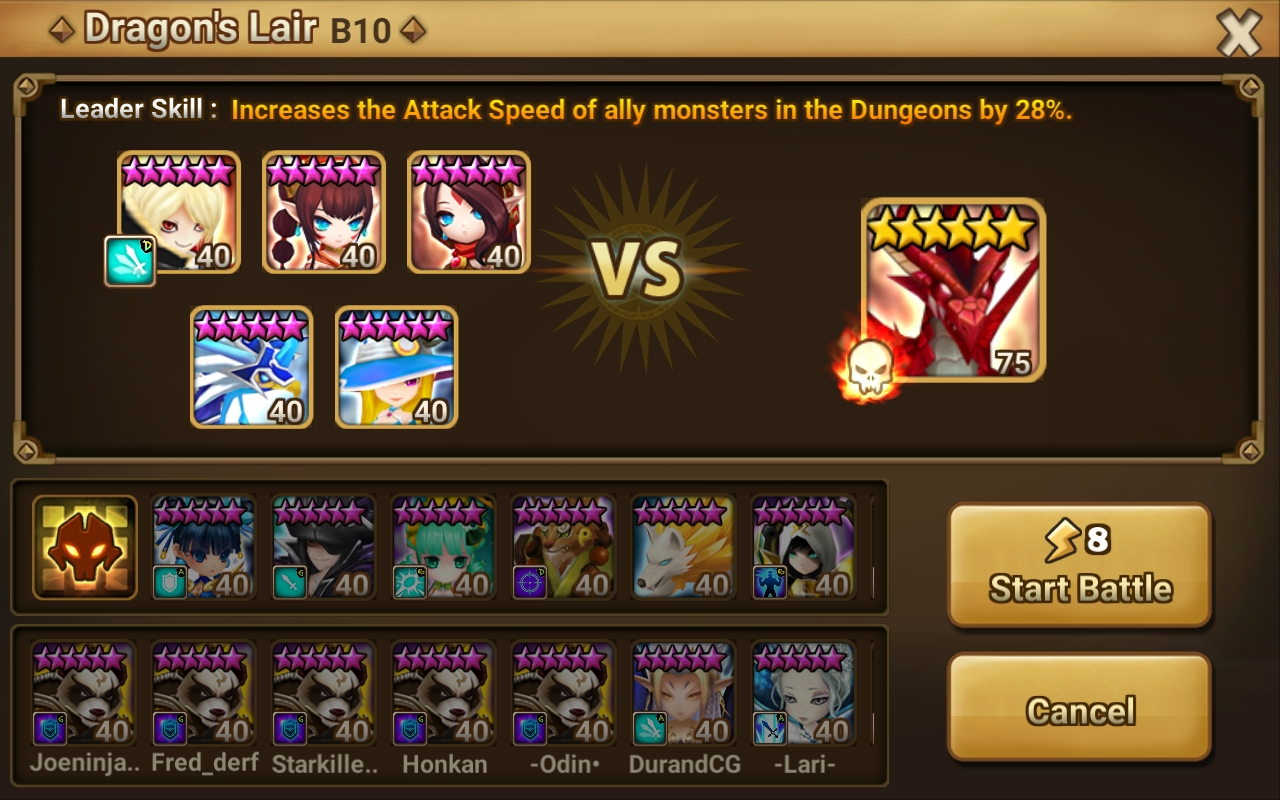 This is where you can best use Maruna! Here, she’s great in speed DB10 teams and especially ToA, when paired up with a Chakram Dancer. Maruna and Shaina is legit one of the best combos ever for ToA. They’ve got nearly all of it – AoE stuns, AoE attack bar decrease, defense break, everything except Continuous Damage. The best runeset now is Violent + Blade, SPD/CRIT DMG%/ATK% 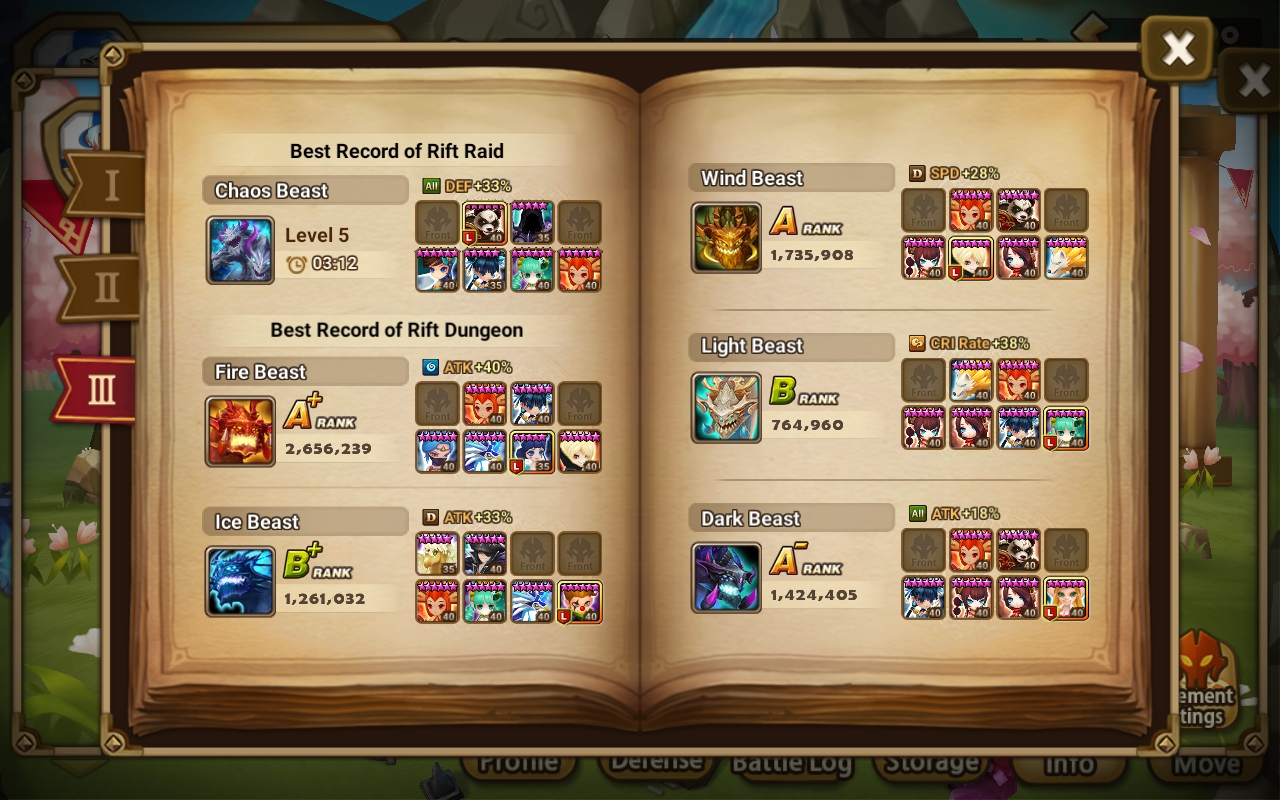 I…don’t know where you can use Maruna late-game to be honest. I mean, yeah, she’s the queen of ToA and especially NB10 when paired up with some Chakram Dancers, but other than that I’m not sure. I’m told the twins are good in the Rift of Worlds, but I don’t think they mean Maruna. I see Maruna more as a PvE mon, while Shaina + Sabrina are great in pretty much everywhere. The runeset is still the same; Vio/Blade, SPD/CRIT DMG%/ATK%. 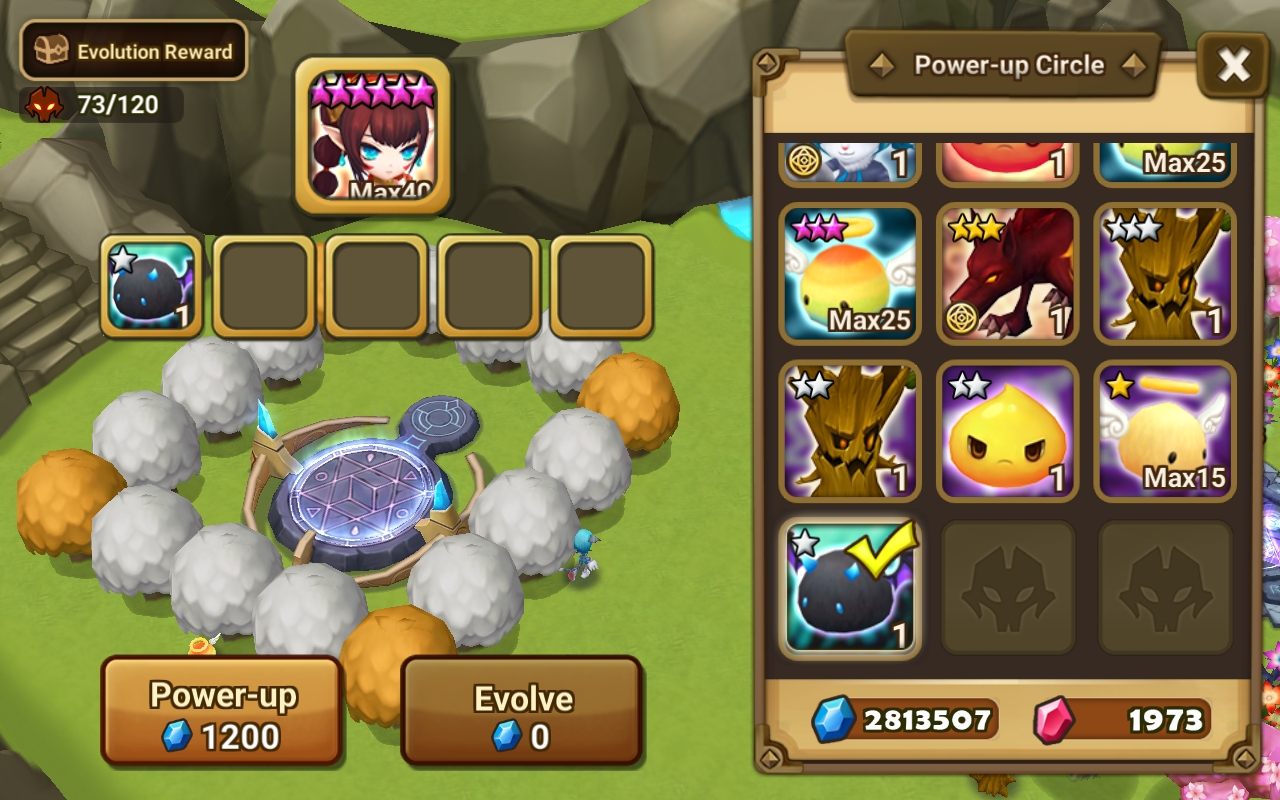 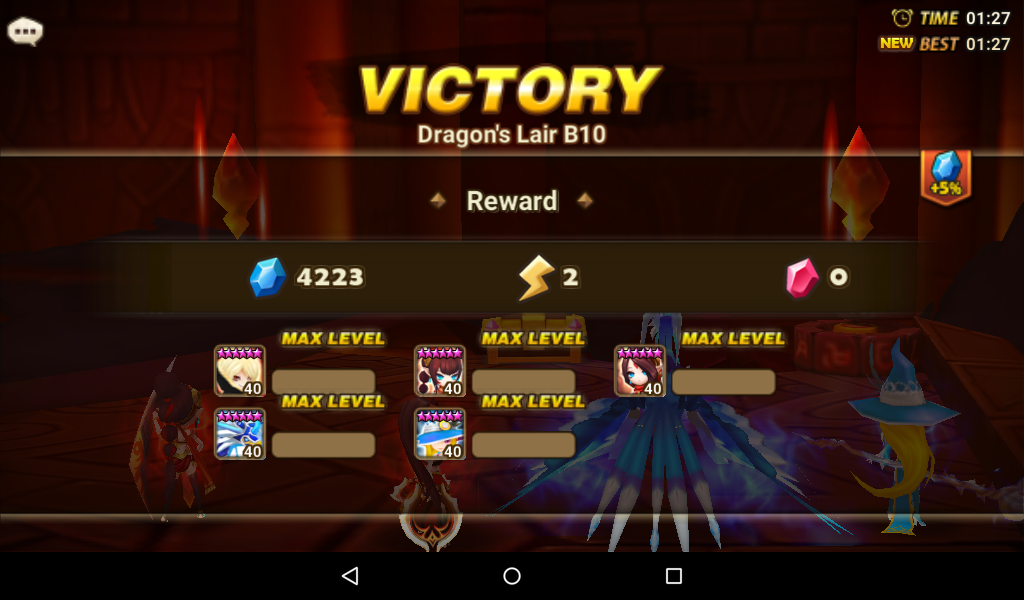 Maruna shines in three places: DB10, NB10, and ToA(H). I’ve currently been using her and Shaina in my DB10 team, and so far my fastest time is 1:27. That’s not very fast, mind you, but keep in mind that this is the standard DB10 team (Verdehile, Veromos, Sigmarus, Megan, Belladeon) but with Veromos and Belladeon replaced with the twins. The average time of the standard DB10 team is 2:30. I think that says a lot. The twins are seriously amazing in NB10. They attack together, meaning multihits. Did you know that for a week or two after the twins were released, all twins attacked together? (Basically, if you had Shaina, Maruna, Talia and Sabrina on your team, all four will gang up on someone. And this happened every time one of the twins got a turn.)

You may be wondering why the heck I’m comparing Maruna to Baretta. Hear me out, though. Both of them are great in ToA and are used for their stuns (though you have to rune Baretta on Despair in order to stun people). I actually don’t need Baretta with my new ToA team, but I use him anyway because the extra stuns are handy. Now, let’s compare Maruna and Baretta!

Anyway, the twins are super over-powered; especially the fire twins. As of this writing, I’ve also pulled a Talia (water Chakram), but I’m not going to review her until I get another Boomerang Warrior – hopefully Sabrina. I’m Sara Ann, and I’ll see you in the next article!  ]]>