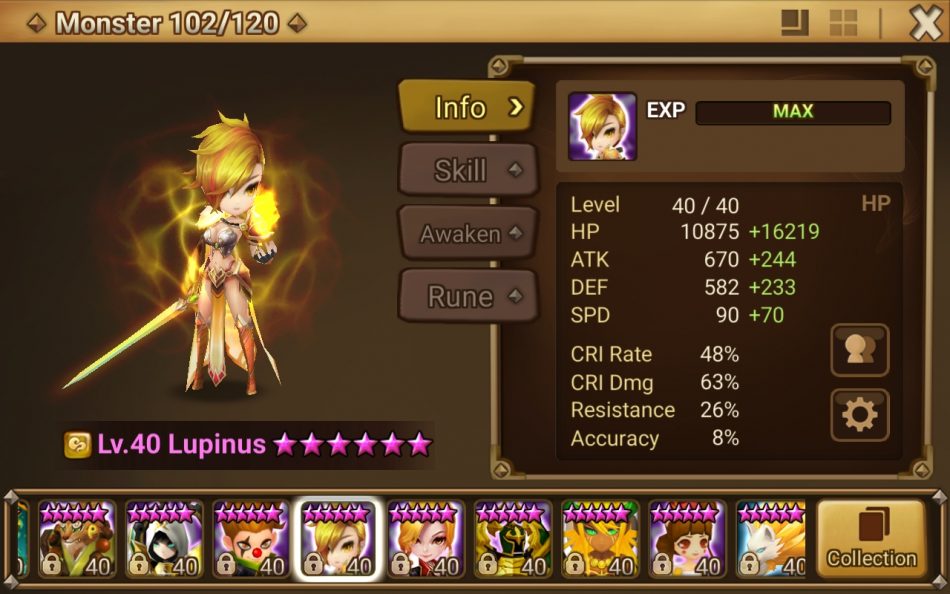 <![CDATA[One monster that I don’t see a lot of people talking about is Lupinus, the wind Magic Knight. It’s a shame, too; she’s become super easy to get (she’s a fusion monster now) and does have her areas where she’s really good! I got her when she had her Hall of Heroes, and she’s been super helpful for me for a while now. These are her stats (the build is SPD/HP%/HP%): <a href="https://summonerswarskyarena.info/wp-content/uploads/2018/12/Screenshot_20181226-175800.jpg"> 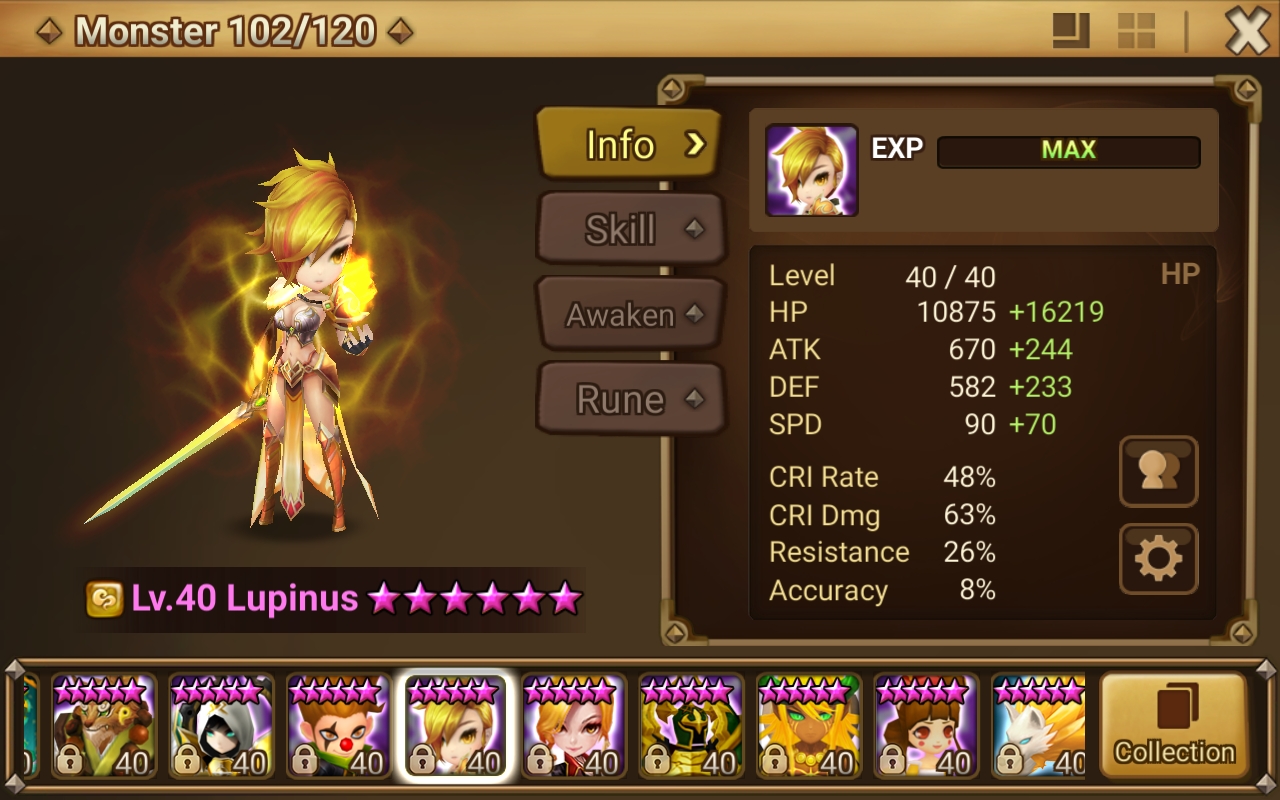 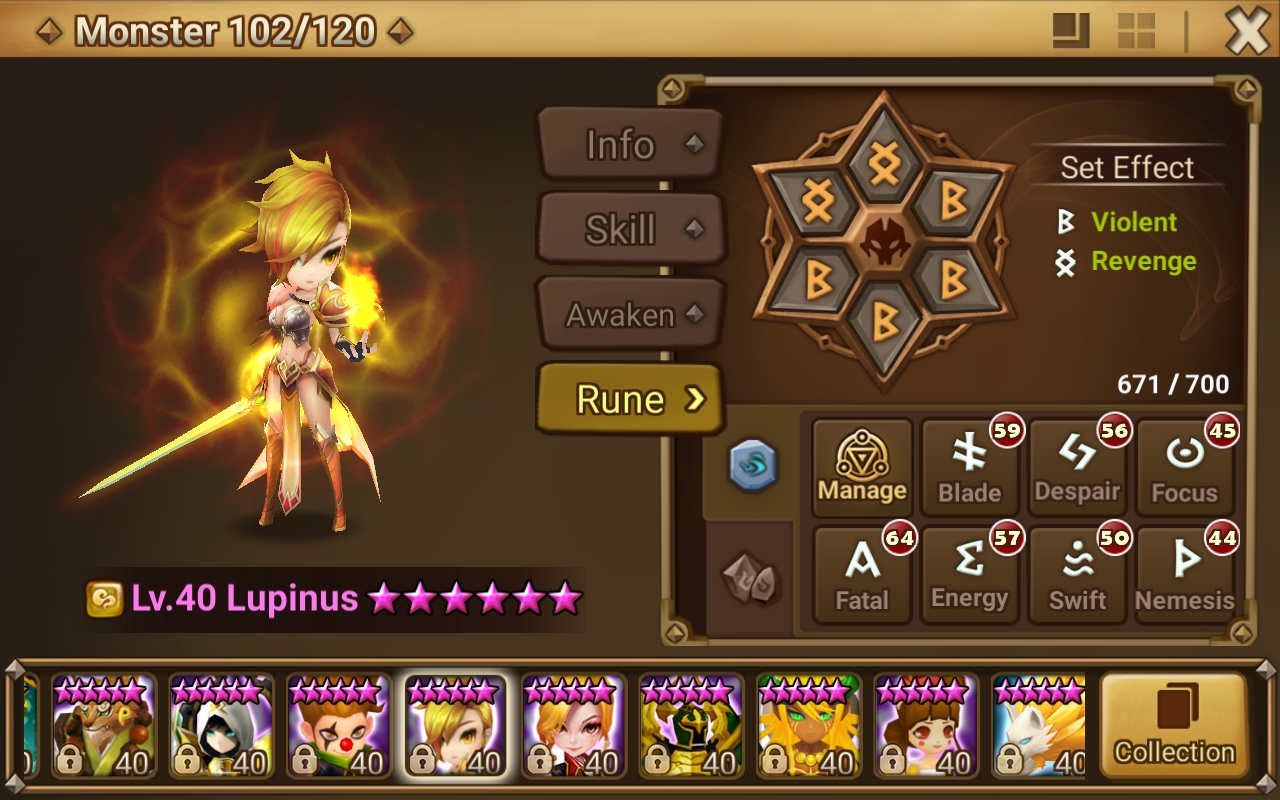 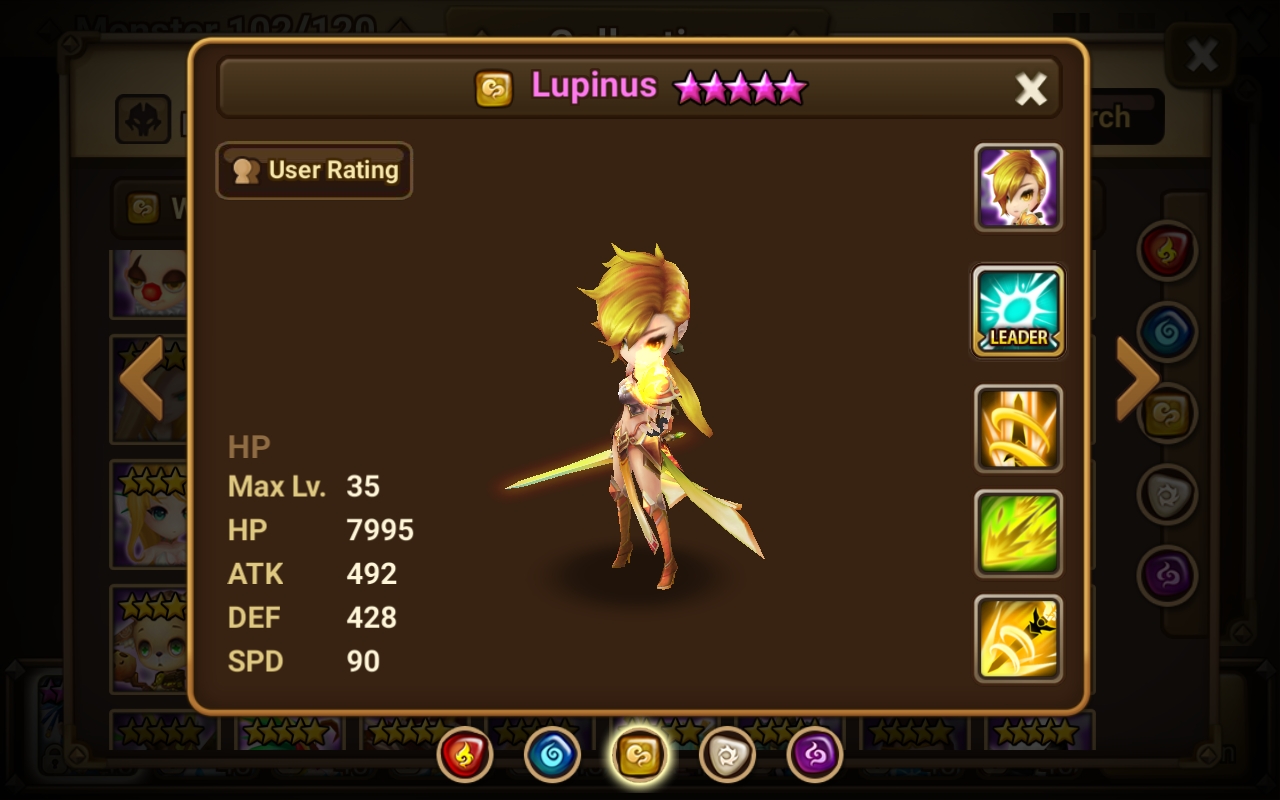 Tempest Sword: Attacks the enemy target 2 times and attacks all enemies on the 3rd attack to inflict damage that’s proportionate to the enemy’s MAX HP. Decreases the Attack Bar by 30% each. (Reusable in 4 turns) Have you noticed a pattern (or two) in Lupinus’s skills? If not, then I’ll tell you: Two of her three skills hit everyone, and all three hit thrice. These alone make her useful in at least two places that I can think of. This makes her good for NB10 just in itself. If you don’t know about Necropolis, it’s a dungeon where your speed is limited and every turn the boss produces a shield that can only be broken by a certain amount of hits. As such, multihit monsters such as Loren or a pair of twins would be optimal. Lupinus is one of those multihit monsters, and I honestly don’t know why no one’s talking about her. I’ve been praising her for a year now (ever since I got my NB10 team) Don’t forget that Lupinus can be fused, too. You need a Roger (wind Bounty Hunter), Moria (wind High Elemental), Spectra (fire Griffon), and a Tarq (water Hellhound). 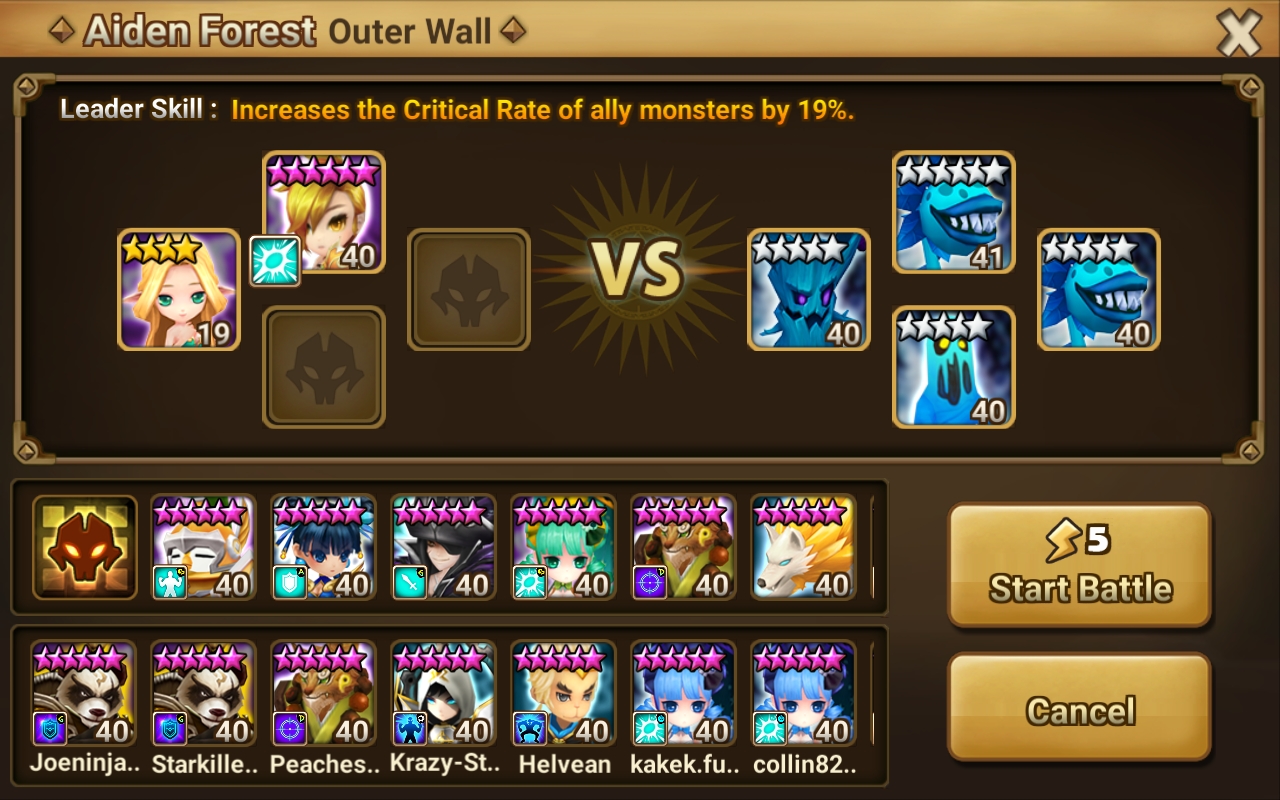 Sadly, as far as I know, Lupinus isn’t really good in early-game. Despite having an elemental advantage, she would end up being targeted a lot in GB10 due to all her multi-hit skills. I’ve tried using her as an Aiden farmer as well, and it didn’t work out too well. Then again, getting targeted in GB10 may actually sometimes be a good thing. Because she keeps piling on multihits, she’ll usually be the one who gets counterattacked instead of someone squishier like, I dunno, Shannon? Belladeon? You get what I mean. She’s more of a tank than anything else, which is why I’d recommend giving her tons of HP substats. Early-game runes: Despair + Energy; SPD/HP%/HP% 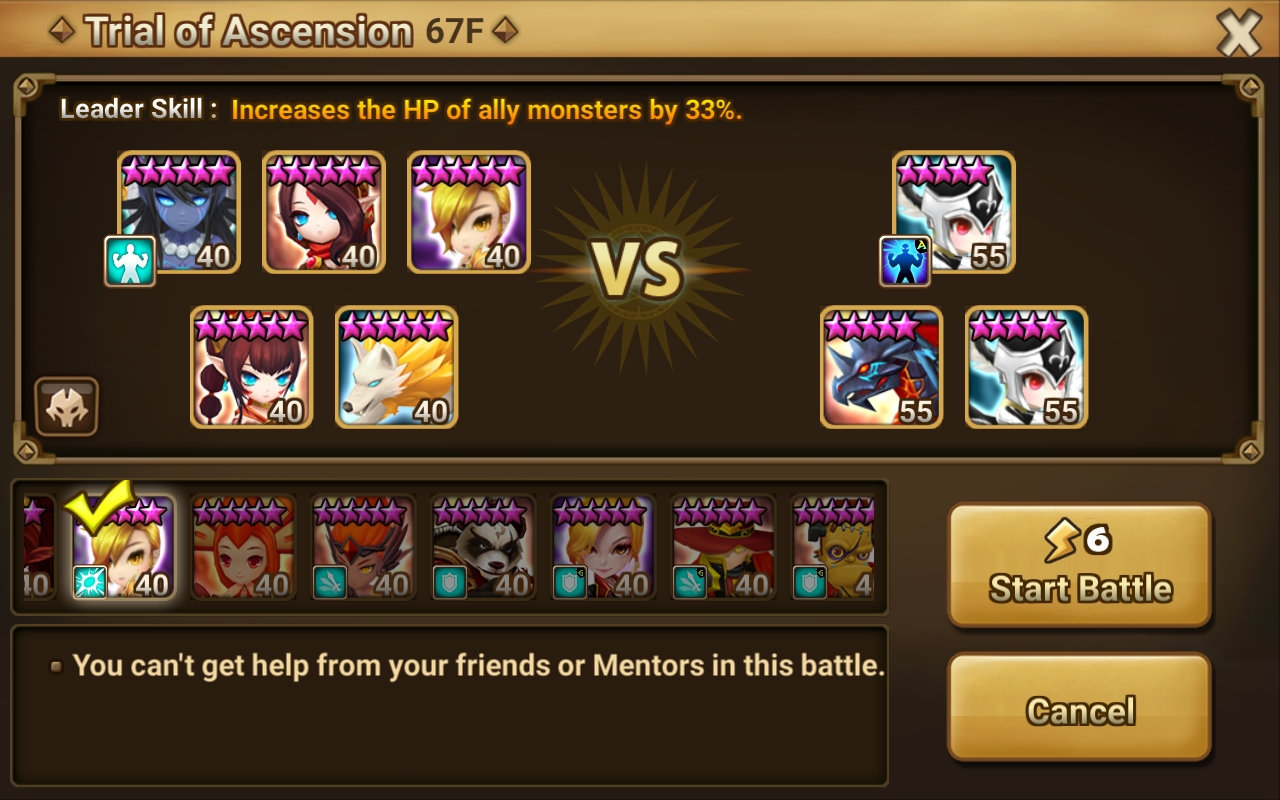 Here’s another place where you can use Lupinus: mid-game! This is usually where she gets the most uses. She’s great in both Trial of Ascenion and NB10, depending on what you rune her with. Seriously though, think about it for a second. On Despair, she could be a good ToA mon because of her two AoE skills and her attack bar reduction. If you rune her on Violent, though, then she’ll become a beast for NB10! If she triggers her violent runes twice, that would be nine hits on the boss; certainly enough to break the shield! I have my Lupinus on Revenge as well so that she counterattacks with another 3 hits when attacked. She’s the best, you guys. I’m using her in a team of Lushen (L), Lupinus, Colleen, Shaina, Maruna. Mid-game runes: Violent + Revenge; SPD/HP%/HP% 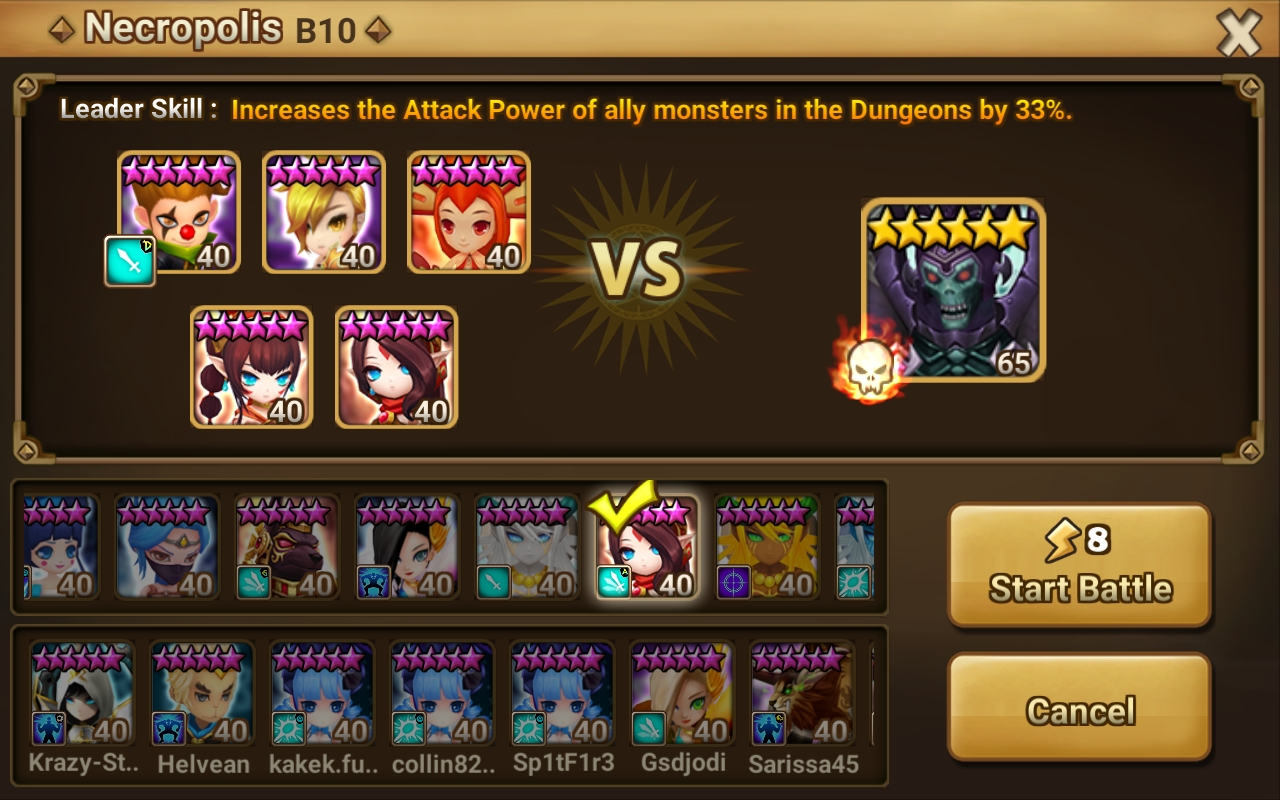 I…don’t think that you can use Lupinus anywhere new in the late-game. She has an elemental disadvantage in DB10, her multihits in GB10 aren’t optimal (I mean, you can make it work but I feel like that takes skills and you could always go for a damage dealer like Lyn), you’re already using her in NB10, probably in some ToA floors, there’s nowhere new to use her. As such, I can conclude that the best late-game Lupinus use is fusing another copy of her for the Baleygr fusion. (That doesn’t mean use up your original Lupinus, but still) Late-game runes: Violent + Revenge; SPD/CRIT DMG%/ATK%

Skillups aren’t necessary in the slightest for Lupinus, surprisingly. She works just fine straight out of the box. Nearly all her skillups go into extra damage or extra harmful effect rate. It’s only Tempest Sword’s very last skillup that gets cooldown reduction. Besides, if you’re only skilling her up because you thought you needed mulithits, remember that all three skills hit three times. She can proc and use literally any of her skills and you would’ve gotten your three hits in.

Anyway, this has been my article on Lupinus and why I think you should use her. The best part about it is that she can be obtained by anybody, just like Verdehile now! You can fuse skillups for her if you want, and is part of fusion material for a really good monster: Baleygr, the fire Lightning Emperor! I’m Sara Ann, and I’ll see you in the next article!  ]]>