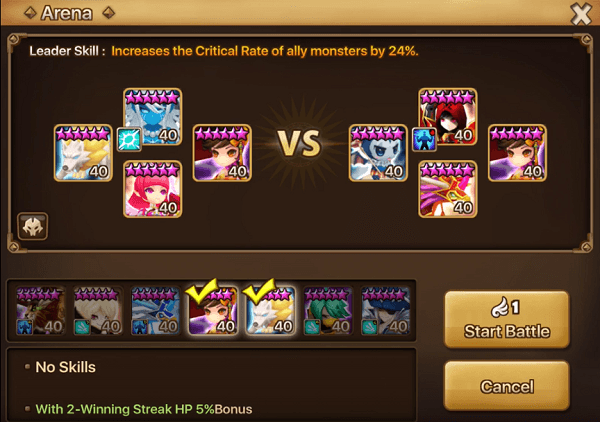 <![CDATA[<center>Note: Guest post by KnightlyGaming In Summoners War Arena, Conqueror level is a milestone achievement for the competitive player. The tiers below conqueror can be achieved by simply placing your for best runed monsters in the arena and trusting in their sheer power to be able to beat newer players. Conqueror level, however, requires thought and skill. I’m a Guardian player on global server, and here are my tips for the aspiring conqueror.

1) Choose your best attack monster, and craft your entire offense around him (or her). If you are just breaking into conqueror, you will not have the required runes and monsters to create a guardian level AOE cleave offense. You will get much better results when you bring one solid attacker and the rest support monsters. Ideally, you want to use Theomars as your best attacker because of his elemental advantage passive, but any attacker will work. 2) Choose supporting monsters that fulfill multiple roles. Belladeon is the best support monster for this situation because of his ability to remove buffs and armor break as well as heal. If you have a Chloe or other form of immunity, bring them as well. In addition to healing, buff removal, and armor breaking, it is a good idea to bring a reviver as well. You are creating an entire offense around one monster, so it is useful to have a rezzer in case your attacker dies. Good suggestions for support monsters are Belladeon, Chloe, Chasun, Briand, and many more. You can get as creative as you want as long as the monsters fills the role of supporting your attacker in some way. 3) Speed tune your monsters. This means that you want all of your support monsters to go before your attacker in order to give your attacker the best shot at destroying someone on the first turn. Your immunity monster should be your fastest monster for protection. (The only exception is if you also bring an attack bar booster like Bernard in which case your immunity monster would go second). The second monster to go in your lineup should be your buff remover, and then your armor breaker. Then you want your attack buffer to go and finally, your attacker. 4) Don’t be worried if you can’t fill every role. Ideally you want attack bar boost, immunity, buff removal, armor break, and attack/crit buff. You only have three spots other than your attacker to fill these roles, so it will be difficult if you do not have monsters that fill multiple roles like Galleon, Tiana, Chiwu, Praha, etc. Don’t be worried. Fill as many roles as you can, but understand the two most important are buff removal and armor break. If you can consistently armor break your target, you will be able to kill it even without attack buff. Use these principles, and you will find that you can safely beat many conqueror level defenses. Good luck out there! -KnightlyGaming Global Server]]>