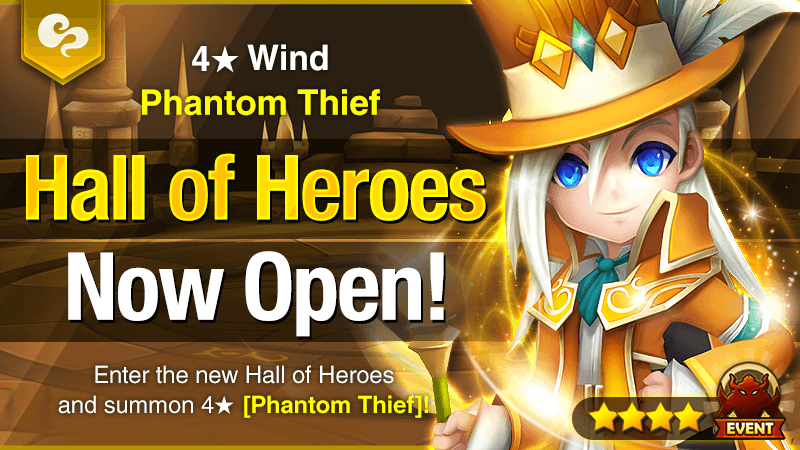 <![CDATA[On Wednesday, February the 6<sup>th, 2019, the Julien Hall of Heroes was announced! He’s the wind Phantom Thief. Alas, the streak of good HoH had to end at one point. Did you know that on February last year, we got Louis, the LIGHT Phantom Thief? Coincidence? I think not! Before we begin, Hall of Heroes is a lot like Trial of Ascension, so that means you can use Trial of Ascension strategy and monsters (e.g. attack bar pushbacks, stuns and continuous damage are king). I strongly advise bringing your regular Trial of Ascension team. In my case, I’m using Baretta (L), Megan, Shaina, Maruna, and Charlotte. I swapped out Frigate for Megan once I got into B2. You’ll understand why. Let’s cut the chatter and get on with it!

Sadly, no. No he is not. I mean, he could be a pretty niche Siege unit, or a stunner for ToA, but other than that he, like all the other Phantom Thieves except Guillaume at this point, suck. I’d still keep a copy of him around just in case the Phantom Thieves get surprise buffs, but I wouldn’t specifically go around building him. Rune Recommendations: Despair + Blade, SPD/CRIT DMG%/ATK% 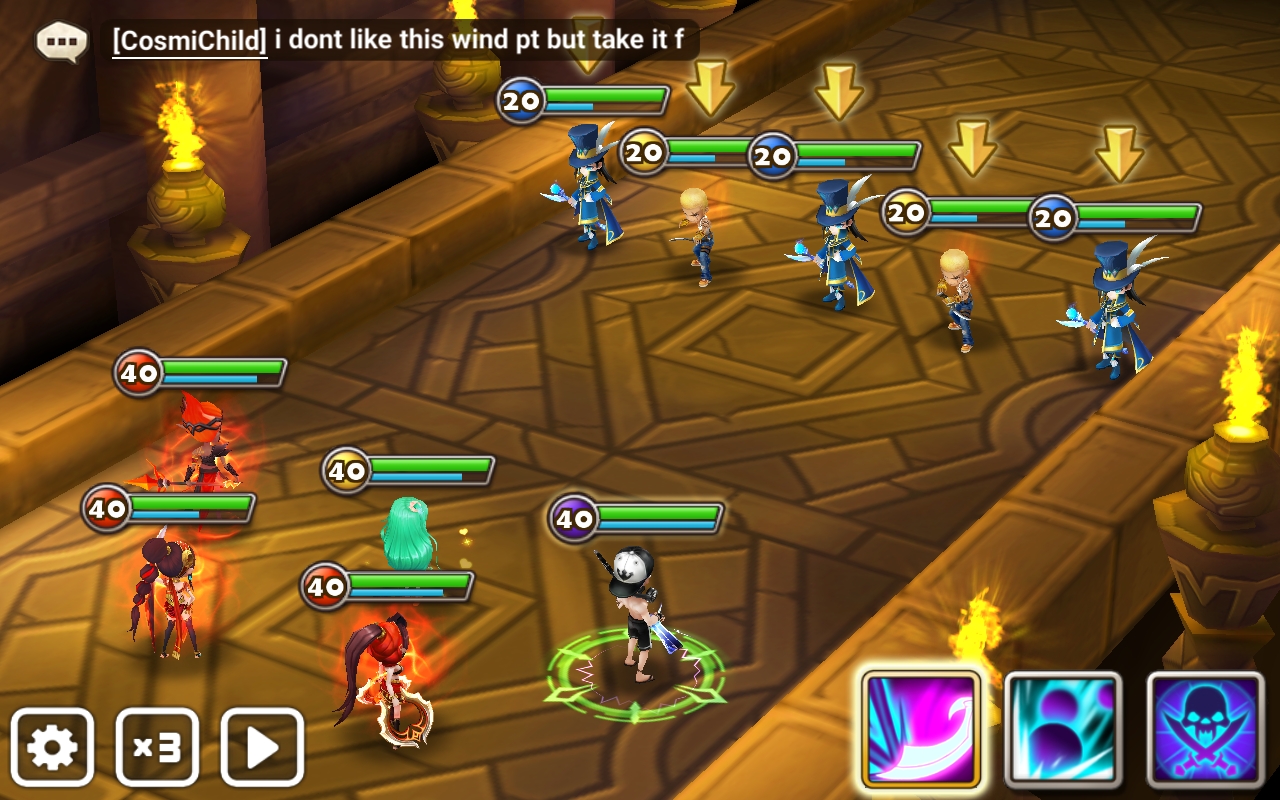 The Hall of Heroes begins! Here, we have two Logans (wind Neostone Fighters) and three Luers (water Phantom Thieves) The Threat: I’d probably say Luer. For the longest time, I did’nt have Galleon, so I had to use Luer as my budget Galleon. His third skill Crime Alert will attack all enemies, decreasing their defense for 2 turns and their Attack Bars by 50%. It will also always land as a Crushing Hit, regardless of the element of the monster he attacks. Logan is also a monster I don’t see many people talking about, which is kind of weird because on paper his kit looks pretty good. I haven’t had time to test him yet, so maybe there’s something that’s holding him back that I don’t know about. His third skill, Push Through, attacks an enemy twice, decreasing their attack speed for 3 turns and decreasing the enemy’s attack bar by 30% per hit. If he completely resets the enemy’s attack bar, he’ll get another turn. The Solution: Kill the Luers first. Attack bar reduction and defense break is never fun to be fighting against, especially because Logan can be considered a nuker. If you’re in the higher stages you could get one-shotted by Logan if Luer gets his defense break on you. You would want to keep Logan stunned at the same time, too. Once all five are dead, you can safely move on to the next stage! 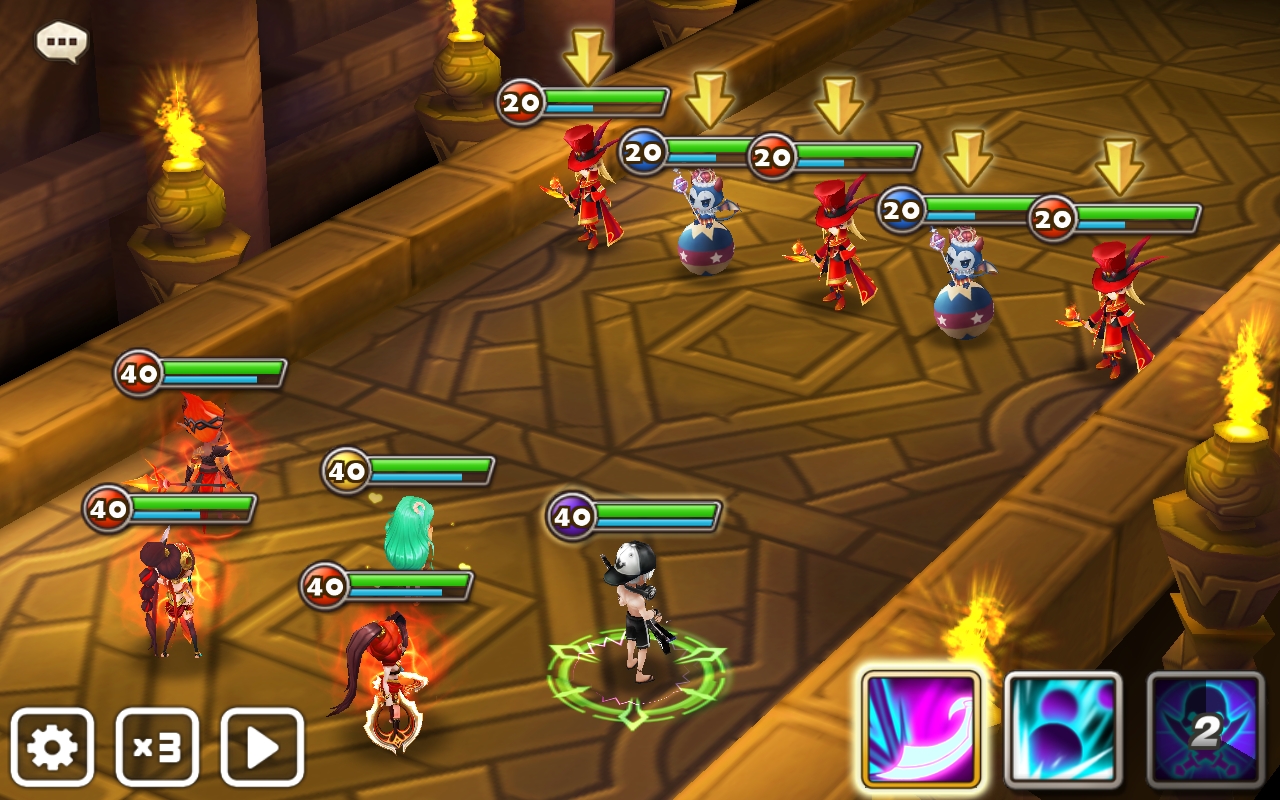 Now, we’re moving on to Stage 2 – with three Jeans (fire Phantom Thieves) and two Orions (cancer hamsters – water Brownie Magicians) The Threat:  There are two threats to worry about – Orion and Jean. They both have their different places, but when they’re combined together they make a surprisingly deadly combination. Orion’s third skill, Harmless Prank, will do four things to random enemies: Strip beneficial effects from one, stun another for a turn, defense break another for two turns, and then block healing on another for three turns. Oh and he increases the attack bar of all allies when he casts this skill. Whoopdy-doo. Jean is a fire single-target nuker. His passive, Old Grudge, increases his attack bar by 50% when he stuns or kills an enemy target (and both his skills stun enemies). He’ll also increase his attack power by 100% when his HP is higher than 50%. The Solution: Kill Orion first. I swear, he’s awful. Orion can easily screw up your team comp if he gets a turn; he’ll always stun the monster you need most right as they’re about to get a turn. That’ll also be when the Jeans cut on and the three of them proceed to kill three of your team members. …Not that I speak from experience or anything, nope, not at all. While you’re working on Orion, make sure you keep Jean’s HP below 50%. It’s not like he can heal or anything, which is always a plus, but it’s really annoying to get your monsters one-shotted because you forgot to make sure he doesn’t go nuts with his passive. 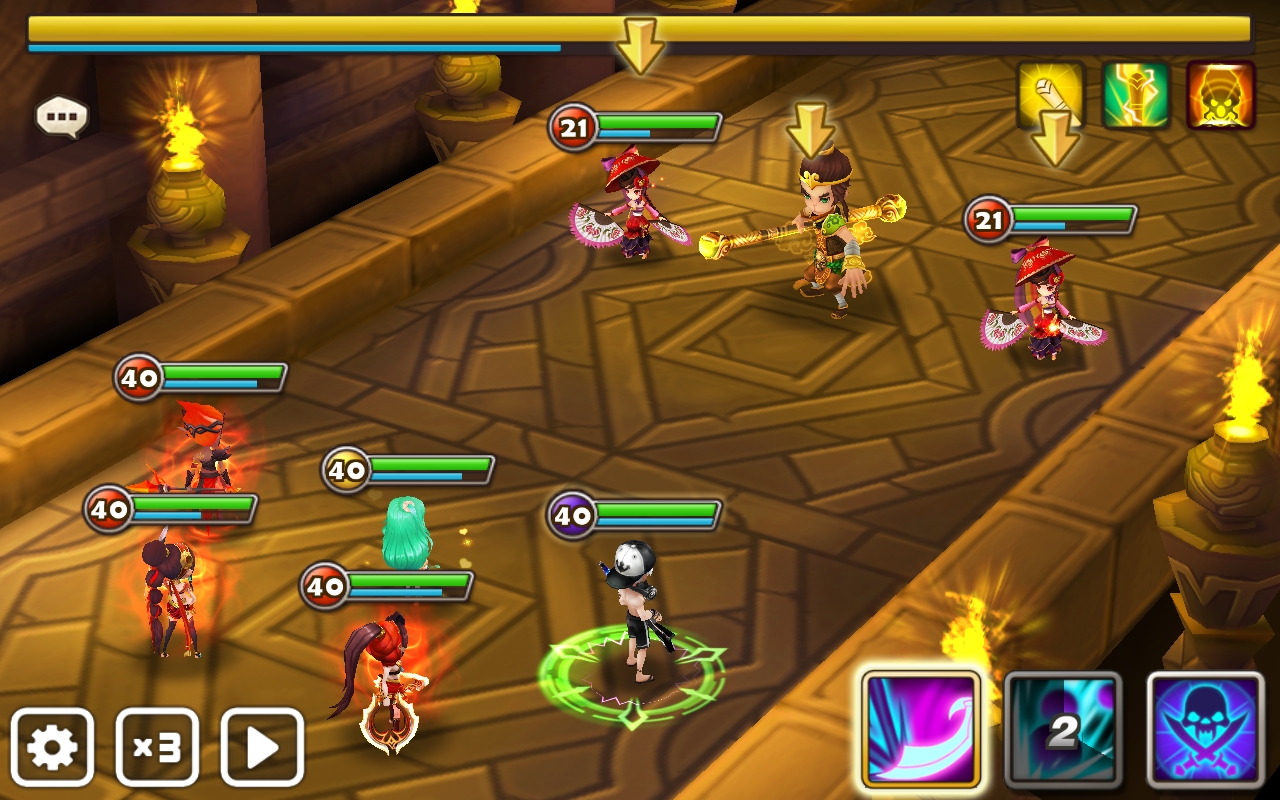 We’re now moving on to the miniboss of this Hall of Heroes! Here, we have one Xing Zhe (wind Monkey King) and two Hwahees (fire Sky Dancers) The Threat: You know how much people hate the Artamiel stage of Trial of Ascension? That’s because Artamiel is the pain in the butt to kill and two of his four lackeys are Xing Zhes – who counterattack you with a 25% chance if you hit an ally of theirs. This is no exception. You may be thinking “la dee da, let’s kill Hwahee and then Xing Zhe!” and then suddenly this ape starts hitting your Baretta over the head with his staff, the Ruyi Jingu Bang! …I watch a lot of Sun Wukong movies, shut up. ANYway, Hwahee’s really annoying to deal with as well. Not only does she have the second skill Amuse (which, in her case, heals based off of her attack power and buffs everyone’s attack power for 3 turns), but her third skill Pride Will Fall with attack random enemies…I’d say about six or eight times. She’ll also reset the cooldown of her third if she kills someone with it. It really hurts. The Solution: Stun Hwahee, and then focus exclusively on Xing Zhe. Yes, his passive decreases the damage that’s inflicted on him by 25%, but you really don’t want him counterattacking one of your monsters and stunning them. That’s right, his first skill stuns people! Thankfully, you don’t have to kill the lackeys anymore if you want to advance (thank you Com2uS for making that much-needed change, I will eternally praise you for it) eternally praise you for it) 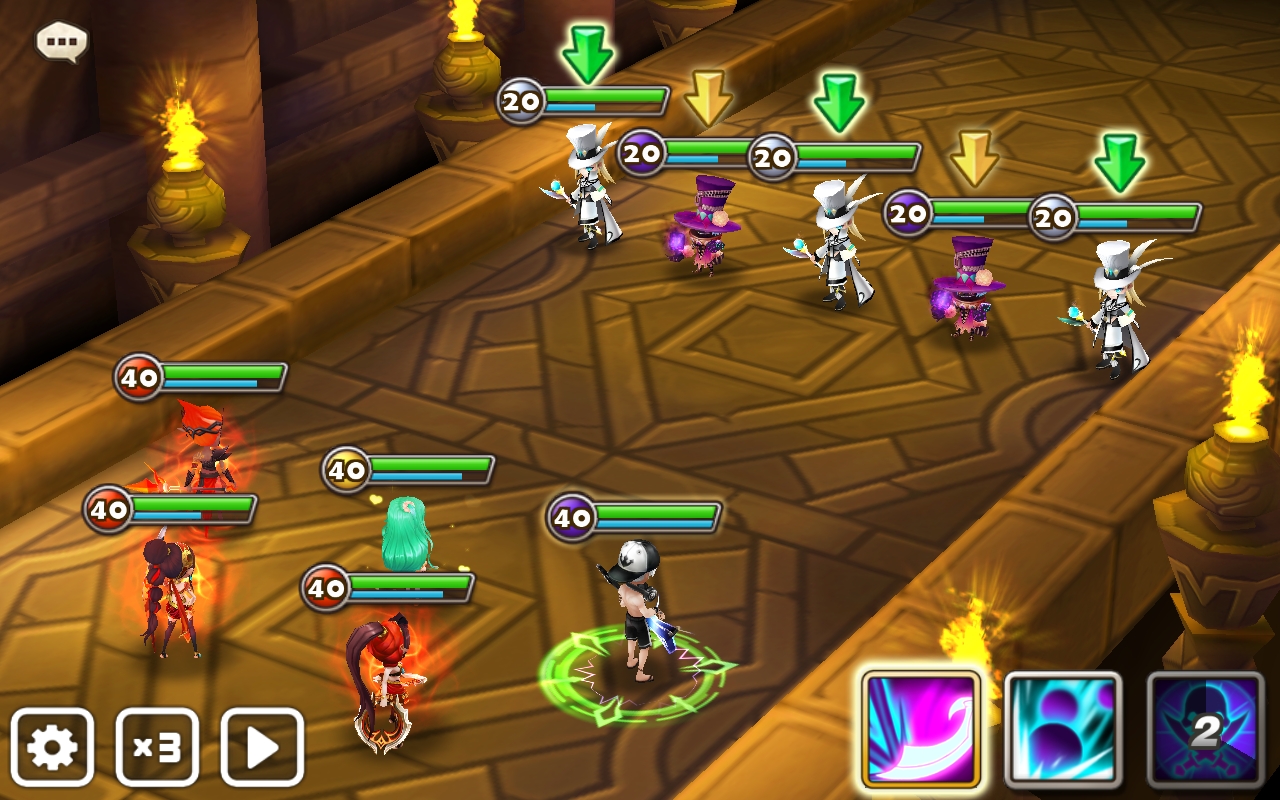 And now we move on to Stage four! This stage consists of three Louises (light Phantom Thieves) and two Montes (dark Dice Magicians) The Threat: I’d definitely say Monte is a real buttface in this round. Destiny Dice can really screw you over, because you’re literally praying to RNG that you don’t get too painful of a roll. He’ll roll 2 dice to redistribute the HP ratio of the enemy, according to the smaller number on the dice. He’ll instantly get a turn if he gets the same number. Louis is considered worthless by most people, but like every worthless monster in existence, he becomes the bane of everyone’s existence in Hall of Heroes/Trial of Ascension. The HP ratio of him and his target ally will be evened out, and the both of them will become Invincible for 2 turns. The cooltime of Illusion Magic will also be decreased for 3 turns if his HP is 50% or lower after the balance. …Problem is, sometimes he can cast this skill on himself. The Solution: Kill Monte first, and then start targeting the Louises. You want to keep them all stunned if you can, and make sure they never get a turn. If one slips through, however, you’re in trouble unless you brought a buff blocker. Though it is nice to have a buff blocker/remover against Louis, that’s not the main reason why you would need one in this HoH… 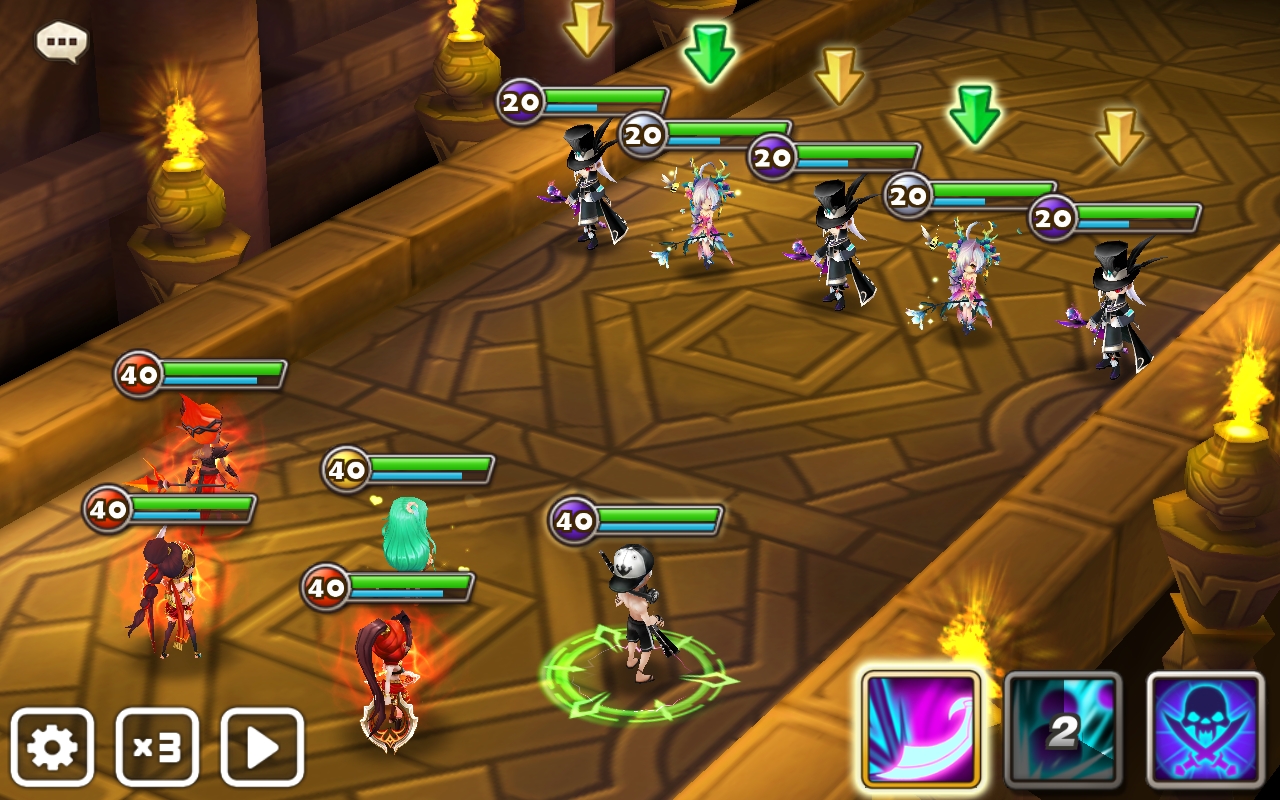 This stage. This stage here is why I suggest bringing a buff remover/buff blocker. Oh my GOD, whyyyyyy. …Anyway, stage consists of three Guillaumes (dark Phantom Thieves) and two Fellerias (light Dryads) The Threat: Let’s start with Felleria, who I’d say is the best of the Dryads. She has the second skill Honey Bee Friends, which removes all harmful effects from all allies and places it on one certain enemy. Her allies have two Continuous Damage effects each? Bam, now a random enemy has eight DoTs on them. Her passive, Deep Rooted Tree, will heal all allies with harmful effects by 10%. If there are no harmful effects on an ally, though, all harmful-effect-free allies will be granted a shield for 2 turns that’s equivalent to 10% of her max HP. And now let’s talk about the main reason why you need a buff remover for this Hall of Heroes: Gui-frickin-llaume. I hate his passive, I hate his passive, I hate his passive. He increases his Critical damage by 50%, increases his chances of getting hit by a glancing hit by 30%, and becomes Invincible for 1 turn if he’s hit with a glancing hit. I don’t know how many times I let my team run on auto, only to look down and realize they’ve been beating at Guillaume’s invincibility for 15 minutes. After the second time I said “screw it” and slotted my Frigate in for Megan just to make this less of a hassle. The Solution: Bring. A. Buff. Remover. I’m serious; you will be infinitely stuck on this stage if you don’t. Alternatively, someone who blocks buffs (e.g. Zinc) would work just as well. I actually recommend bringing a Zinc if you have him. 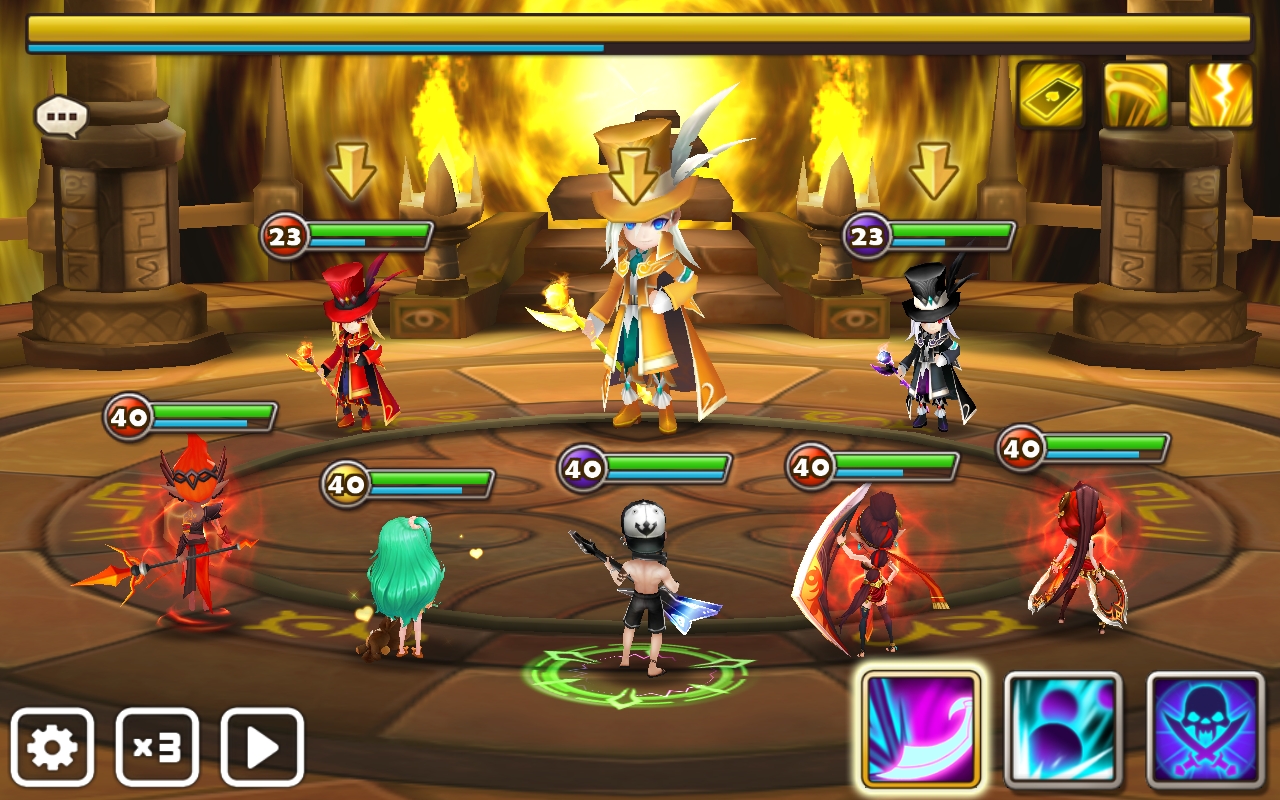 Well, after that nightmare of a stage 5, it’s time to move on to Stage 6, which should feel like a breath of fresh air at this point. The threat and solution differs because, in each boss stage, the lackeys differ. The Threat: See above. In the case in the picture, though, I would say that Jean is a big threat nuke-wise, but Guillaume would be really annoying to deal with if you accidentally trigger his passive. Luckily, though, they changed the rules of Hall of Heroes a while back that you don’t have to kill the lackeys in the boss and miniboss stages if you want to advance on, so you could just completely ignore them both if you want. The Solution: I would personally just stun Jean and Guillaume and then work on Julien here. I mean, you don’t have to pay attention to either of them if you don’t want to – however, someone like Louis I’d recommend killing as quickly as possible. Trust me, you don’t want him to cast Illusion Magic on Julien, especially if you haven’t heeded my warning and didn’t bring a buff remover. Anyway, this has been the Julien Hall of Heroes. It was way more difficult than it needed to be, and all for what? Luer skillups? But I guess we can’t complain about Com2uS giving away free four-star monsters, which can be used for Legendary Pieces or what-have-you. I’m Sara Ann, and I’ll see you in the next article!]]>