<![CDATA[Welcome to the Jojo fire joker spotlight! I will be starting a series where we do an in depth review of this monster. [easytable]<a href="https://summonerswarskyarena.info/wp-content/uploads/2015/09/Joker-Fire.png">

Awakened Bonus: New Skill [Fire Magic] Leader Skill: Increases the Defense of ally monsters in the Dungeons by 33%. Skill 1: Flying Cards: Throws a sharp card to attack and disturbs the enemy’s HP recovery for 2 turns with a 70% chance. Skill 2: Surprise Bomb: Mounts a bomb on all enemies which detonates after 2 turns. This skill receives 50% additional Accuracy . (Reusable in 5 turn(s)) Skill 3: Fire Magic: Summons a wall of fire and inflicts Continuous Damage for 3 turns.(Reusable in 5 turn(s))

Jojo is a fusable bomber that is a good addition to your team if you are looking to create a bomber team. The good thing about Jojo is that his bomb has additional +50% accuracy, so you won’t need as much accuracy stats from runes. Keep in mind Jojo is part of the Water Phoenix fusion. Monster Combos Jojo works very well with other bombers like Liebli(Dark Joker), Taurus(Wind Kobold Bomber), Malaka(Water Kobold Bomber), Dover(Light Kobold Bomber) and bomb detonators like Carrack(Fire Pirate Captain) and Seara(Wind Oracle).

Since bombs scale with attack power, the most viable build would be Fatal/Focus(Atk%/Atk%/Atk%). His sole purpose is to land bombs. Without bomb damage, his damage is lackluster.  Some nice hp% substats goes a long way with Jojo. Important substats: Spd, Atk%, Hp%

Jojo is usable in higher ToA normal due to bombs ignoring defense. He also offers AoE continuous damage, so he will come in handy vs high hp monsters. However, Baretta(Fire Sylph) is the better pick here for most stages. As for ToA hard, he is good in lower levels until about 50 and the monsters have way too much hp for Jojo to be viable.

Jojo isn’t a Cairos dungeon monster. I would not use him for B10 dungeons. However, for lower B1-B8, he can be used but there are better monsters for this.

A bomb squad with Jojo is great for both arena and guild wars offense. With the emergence of Veromos, bomb squads are mostly effective against teams without immunity or cleanse. However, you can get past the cleanse of Veromos by inflicting multiple debuffs before dropping bombs. It is still risky as a few violent procs from Veromos will ruin your day. You can also make Seara/Carrack detonate bombs before Veromos gets to move. 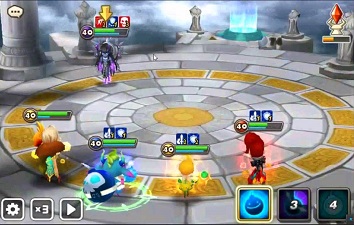 A standard arena bomb squad would be Carrack/Seara, Jojo, Any Bomber, Megan/Shannon. You will lack healing, but you can one shot monsters with 2 bombers with high attack power. For guild wars, you will most likely have to run Jojo, another bomber and Shannon/Megan/Galleon/Aquila for the attack buff. The enemy team will also have to not run immunity teams. If they do, then Aquila is your option to remove immunity and buffs. Aquila also offers the attack buff, which is great for bombers. Jojo isn’t that good in defense and its a free win for opponents when they bring Veromos.

Jojo is decent but the Dark Joker, Water and Wind Kobold bombers are better due to them having higher attack power. I would not use him unless you don’t have the kobold bombers.]]>