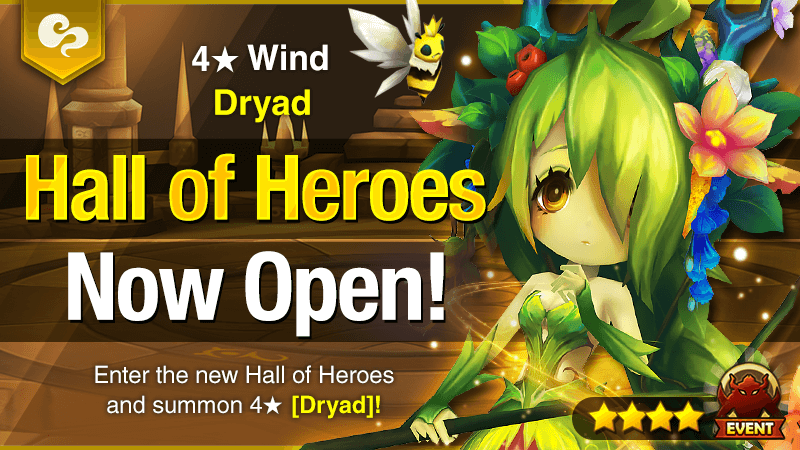 <![CDATA[On Wednesday, July the 10<sup>th, 2019, the Hall of Heroes for the wind Dryad Mellia was announced. This is actually the first Dryad Hall of Heroes that we’ve had, and her water sister Herne is really good – she’s the only four-star monster with Oblivion! Before we begin, Hall of Heroes is a lot like Trial of Ascension, so that means you can use Trial of Ascension strategy and monsters (e.g. attack bar pushbacks, stuns and continuous damage are king). I strongly advise bringing your regular Trial of Ascension team. In my case, I’m using Baretta (L), Frigate, Maruna, Shaina, and Charlotte. Let’s cut the chatter and get on with it!

I’m pretty sure you can actually use her for early game! She looks like she can be pretty OP for GB10, due to many things. First off, she’s a wind element. Second of all, her first and second skill absorbs the enemy’s attack bars. Her second skill, Earth Friends, will attack all enemies, decrease their attack speed for 2 turns, and then reduce their attack bar by 50%. Here’s where she really shines, though. Her passive Thorn Tree will inflict Continuous Damage for 2 turns every time she attacks an enemy. However, if they already have a DoT on them, she’ll inflict another Continuous Damage for 1 turn. In other words, the DoTs start to stack up, which is really OP in GB10. Rune Recommendations: Violent + Focus, SPD/HP%/ACC% 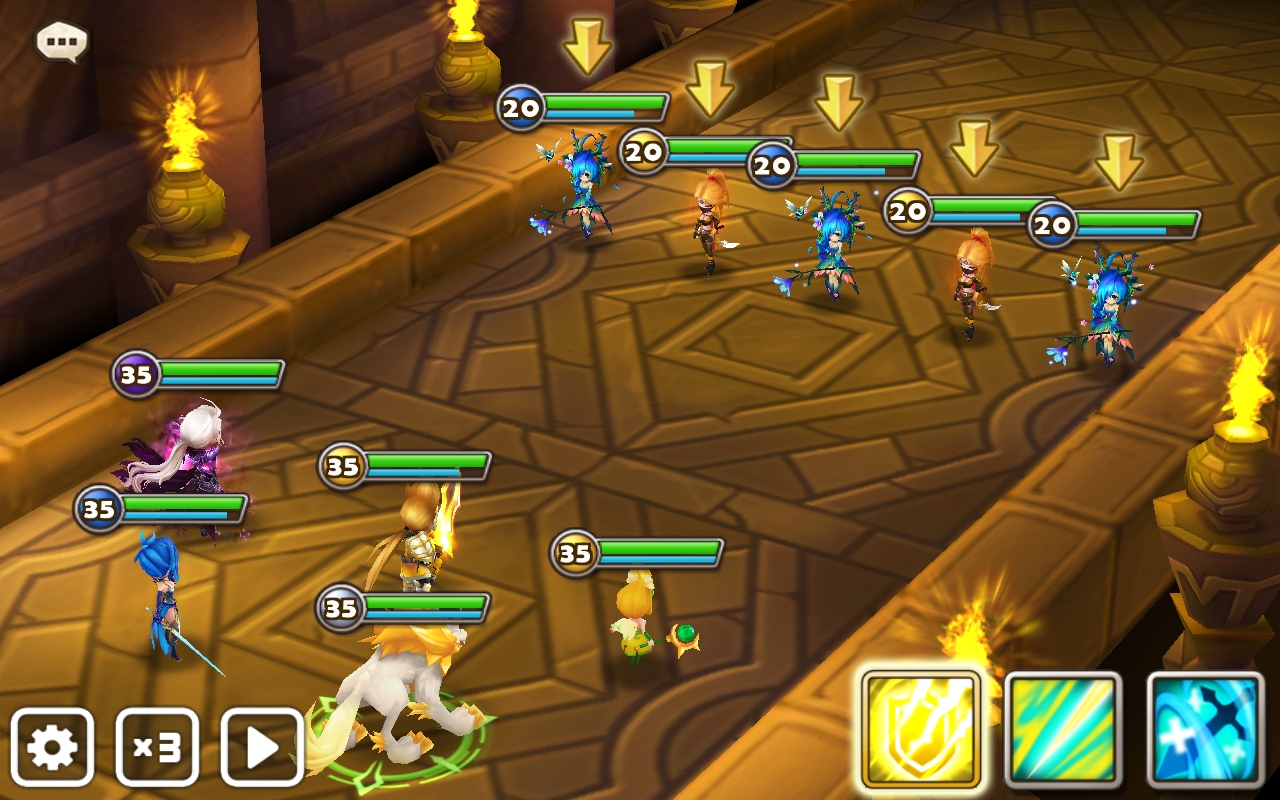 As you can see here, we have three Hernes (water Dryads) and two Tanyas (wind Assassins) The Threat: Crowd-control wise, Herne’s the bigger threat here. Her second skill, Honey Bee Friends, takes away all the harmful effects on her allies and places them on an enemy. if there are no allies with harmful effects, though, she’ll heal them all for 10% of her HP. Tree of Loss, her third skill, attacks an enemy, decreases their attack bar by 50% and plants (heh) Oblivion on them for 2 turns, which blocks passives. Tanya, meanwhile, is the main damage dealer in this stage. Her second skill Capture Opportunity increases her attack and critical rate, and she’ll instantly gain another turn after that to attack. But wait, there’s more. Her third skill, Shadow Assault, will attack an enemy with a 770% multiplier, block healing on that enemy for 2 turns, but if she kills them, she’ll instantly use Shadow Assault again on another random enemy. As you can see, Tanya will be the one who ends up killing a lot of enemies, while Herne will be the one who cleanses the debuffs off of all her allies. The Solution: Go for Tanya first. While Herne may be able to put Oblivion on her enemies and cleanse her allies, she can’t potentially kill two enemies at once. Once both Tanyas are gone, then you can work on Herne, who’s pretty tanky and plants Oblivion. If you can’t immediately kill Tanya, you can stun both of them as quick as she can. Once all five are dead, let’s move on to a… very annoying stage 2. 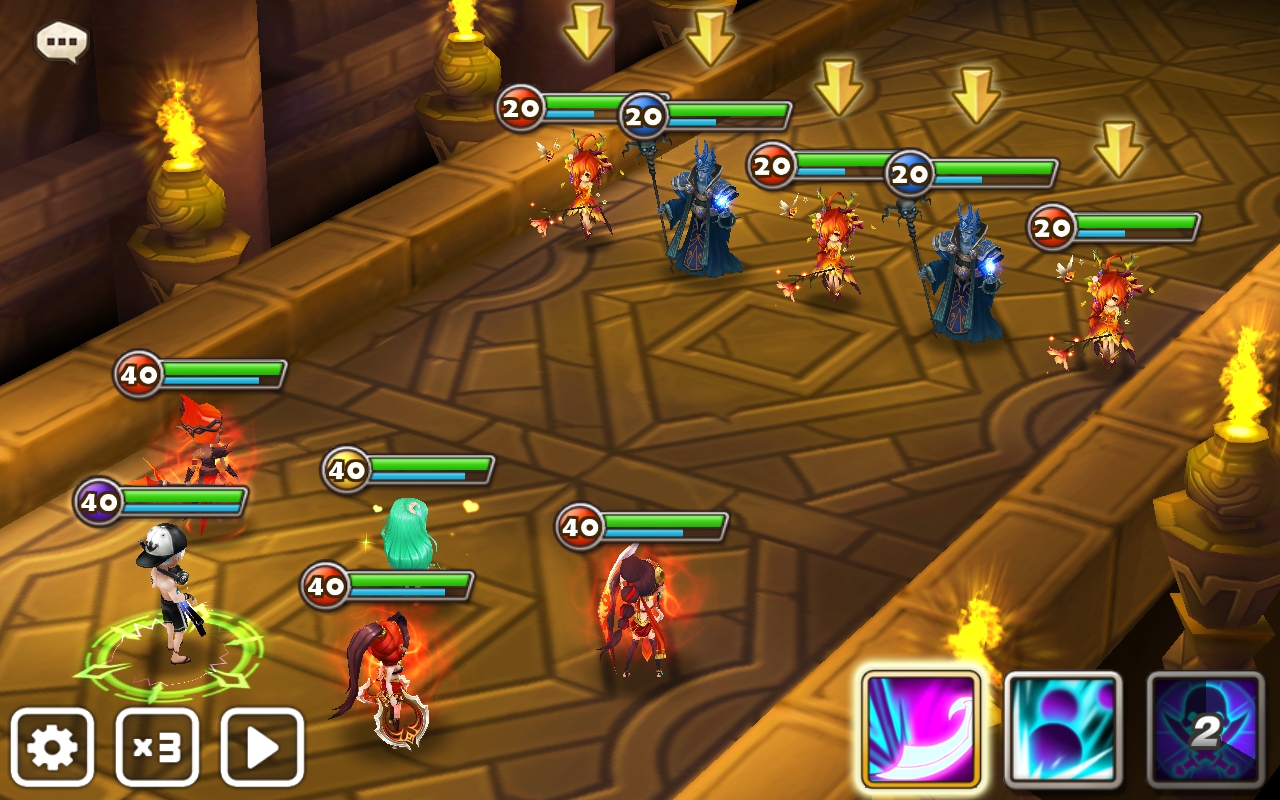 I really hate stage 2. I really do. Here, we have three Nishas (fire Dryads) and two Rigels (water Liches) The Threat: RIGEL. Rigel, Rigel, Rigel. Oh my god, I cannot properly write how much I hate Rigel. I think this stage is the one that took me out the most and made me have to grab a Verad rep. Lemme talk about why. First of all, Nisha actually isn’t that bad to deal with. Her third skill, Flower Fog, attacks all enemies, and shortens the time of the beneficial effects on them by 1 turn each. However, if they have no beneficial effects, she’ll instead block buffs on them for 2 turns. She also has the Honey Bee Friends second skill, which is annoying, but nothing you can’t take care of with a cleanser. But RIGEL, though. Let’s just… talk about Rigel’s passive. End of Evolution already grants him immunity against inability effects (sleep, stun and freeze). This in itself is annoying, but wait, there’s more. He decreases his chances of getting hit by a critical hit by 25%, and increases his attack power and defense by 10% every time he gets hit by something that should’ve landed as a CRIT, but didn’t. This accumulates up to ten times. …Yeah. The Solution: Oblivion actually blocks Rigel’s passive, so if you have someone who brings Oblivion (i.e. Tesarion, Isis or Herne), you’d do good bringing them along just for this stage. Otherwise, try nuking them down as fast as you can. Nisha you can get away with stunning and ignoring until Rigel’s dead, but you need to delete Rigel immediately. 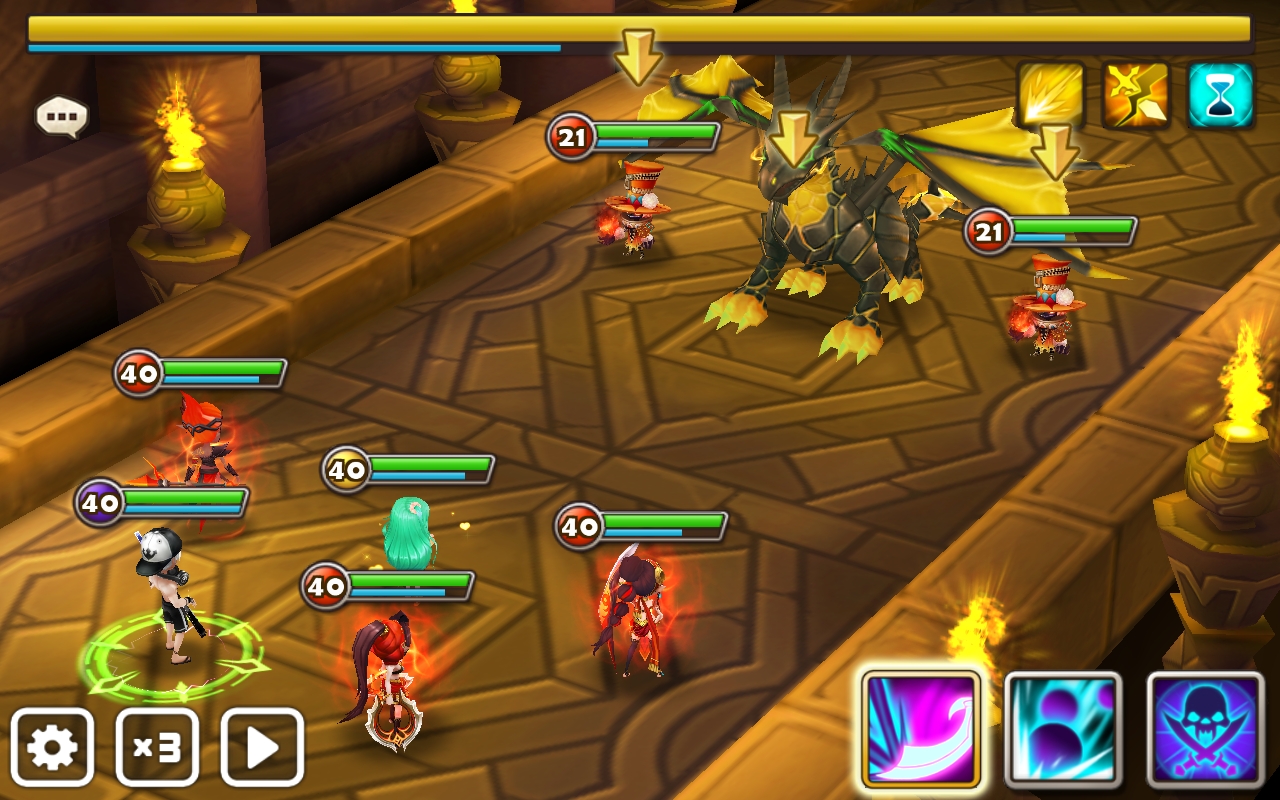 Our miniboss here is Jamire (wind Dragon) and two Ludos (fire Dice Magicians) The Threat: Heck. So this may be the one time in recent memory of HoHs where the lackeys are scarier than the miniboss himself. That’s not to say Jamire’s ridiculous, though – he actually has an overloaded kit and I’d really like him or any of the Dragons Com2uS HINT HINT – his third skill, Illusion of Time, cleanses all harmful effects off of his allies and completely resets the cooldown on all their skills. Ludo, however, is our main damage dealer. His passive, Roll Again, makes him roll a die at the start of each turn. If the number on his die is large (I think > 3), the damage is increased by up to 70%, and the damage he takes is reduced by up to 70% if the die number is small, so < 3. The Solution: Did you know that you can nuke down the Hall of Heroes boss and miniboss now without needing to take down the lackeys? It’s true; you can either go for Ludo and then Jamire or just stun the Ludos and nuke down the Dragon boi. Personally, though, if your damage output isn’t high enough, I’d kill both Ludos before going for Jamire. Jamire’s more of a support mon than a damage dealer. 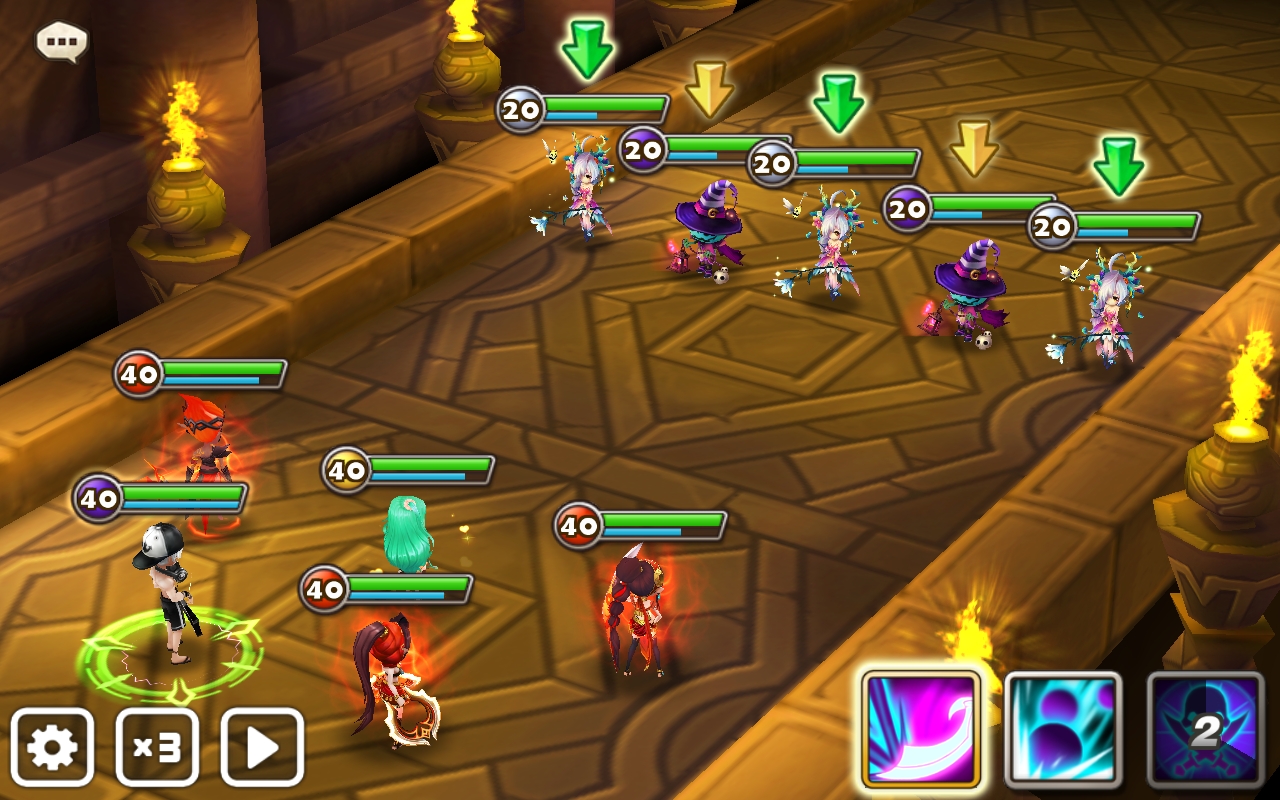 Alright, people, two more stages before the boss! Here, we have three Fellerias (light Dryads) and two Duskies (dark Jack-o-Lanterns). The Threat: There is no “instant kill” threat here; just five supporters, but that’s not to say those supporters aren’t annoying to deal with. Felleria’s passive, Deep-Rooted Tree, makes her the best of the Dryads. At the start of each turn, she’ll heal all allies with harmful effects on them by 10% of her HP. If they don’t have harmful effects, though, she’ll create a shield equivalent to 10% of her HP for 2 turns on them. Oh, and she has the Honey Bee Friends second skill. Dusky, meanwhile, has a passive called The Night’s Comfort. If he doesn’t attack on his turn (whether he uses his second skill Song of the Night Wind or stunned), he’ll gain a 3-turn shield, and if he has any kind of shield on (Woosa, etc) the damage he deals is increased by 50%. So. Yeah. The Solution: Definitely go for Felleria first. She’s the best Dryad for a reason, and that reason is her passive skill. As long as you keep her attack bar down and herself stunned, she won’t be able to trigger her passive, and then you can safely work on Dusky. 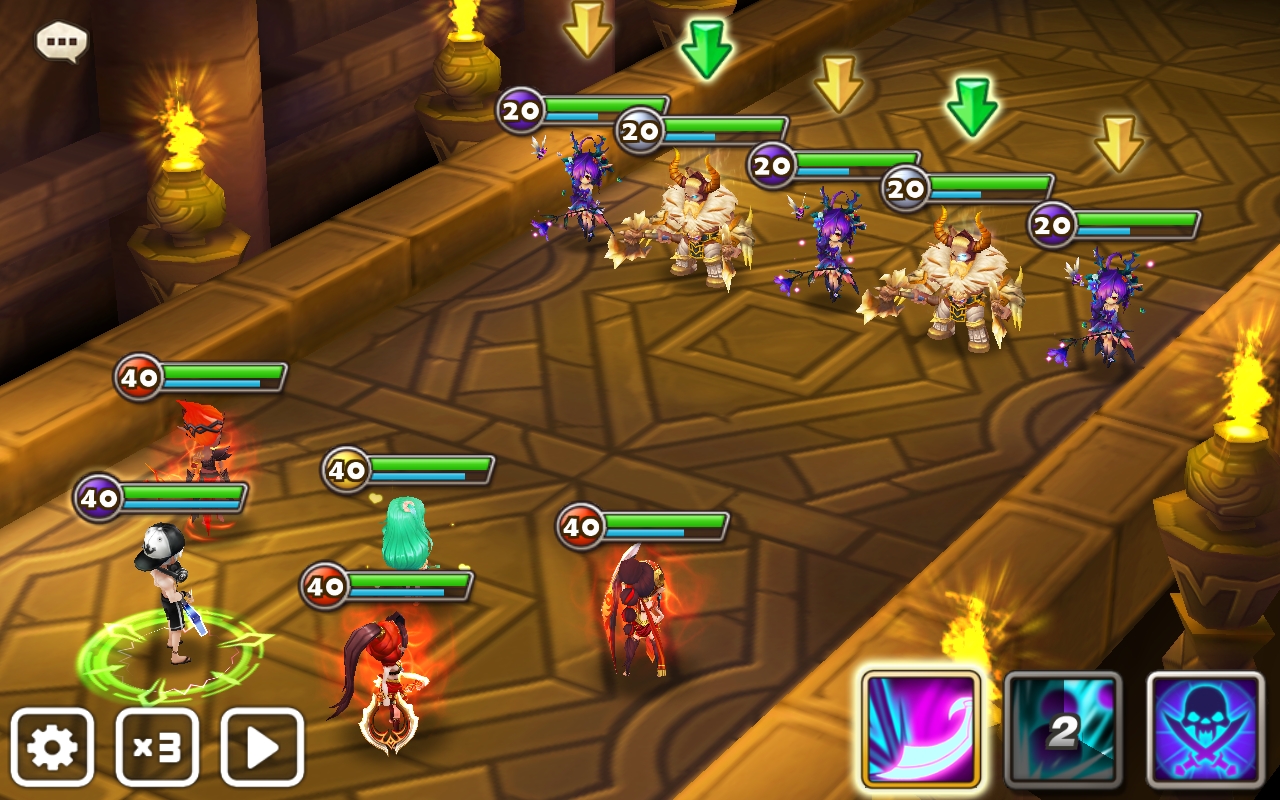 Three Hyanes (dark Dryads) and two Mimirrs (light Barbaric Kings) The Threat: I’m sorry, can we just talk about friggin’ funny Hyanes’ animation for her third skill Mandrake is? I can’t take her seriously with this wannabe Groot thing flailing around going “BOODALOODALOODALOOD” on everyone. I wish I had a Hyanes, solely for that. ANY-way, I’m gonna have to say Mimirr is the bigger threat here. His third skill Confine attacks an enemy target, depletes its attack bar to 0 and then stuns it for 1 turn. When this attack is on cooldown, he’ll increase his attack speed by, like, 35 and then he’ll recover 10% of his HP every turn he takes while it’s on cooldown. It does a ton of damage, too, especially higher up in the levels. Hyanes, meanwhile, has the third skill Mandrake, which attacks all enemies, increasing the time on their harmful effects by 1 turn and decreasing the time on their beneficial effects by one turn. Now, this may not seem like much, but if you have, say, 1-turn Immunity, it’ll strip the Immunity off. Also, I’m not too sure if she’ll decrease the ticks on, say, a Bomb or increase it. Based on logic, I’d say she decreases it so it blows up in your face. The Solution: Take out Mimirr first. I am not kidding when I say that; surprisingly, he was the stage that took me out the most next to Rigel and Nisha. I despise Mimirr here. After that, you can safely work on Hyanes. If I haven’t mentioned it, make sure to bring a cleanser, like Veromos. It’ll help for Hyanes’s Mandrake and the Honey Bee Friends Dryads, well, Honey Bee Friends skill. With this, we can finally move on to the boss stage! 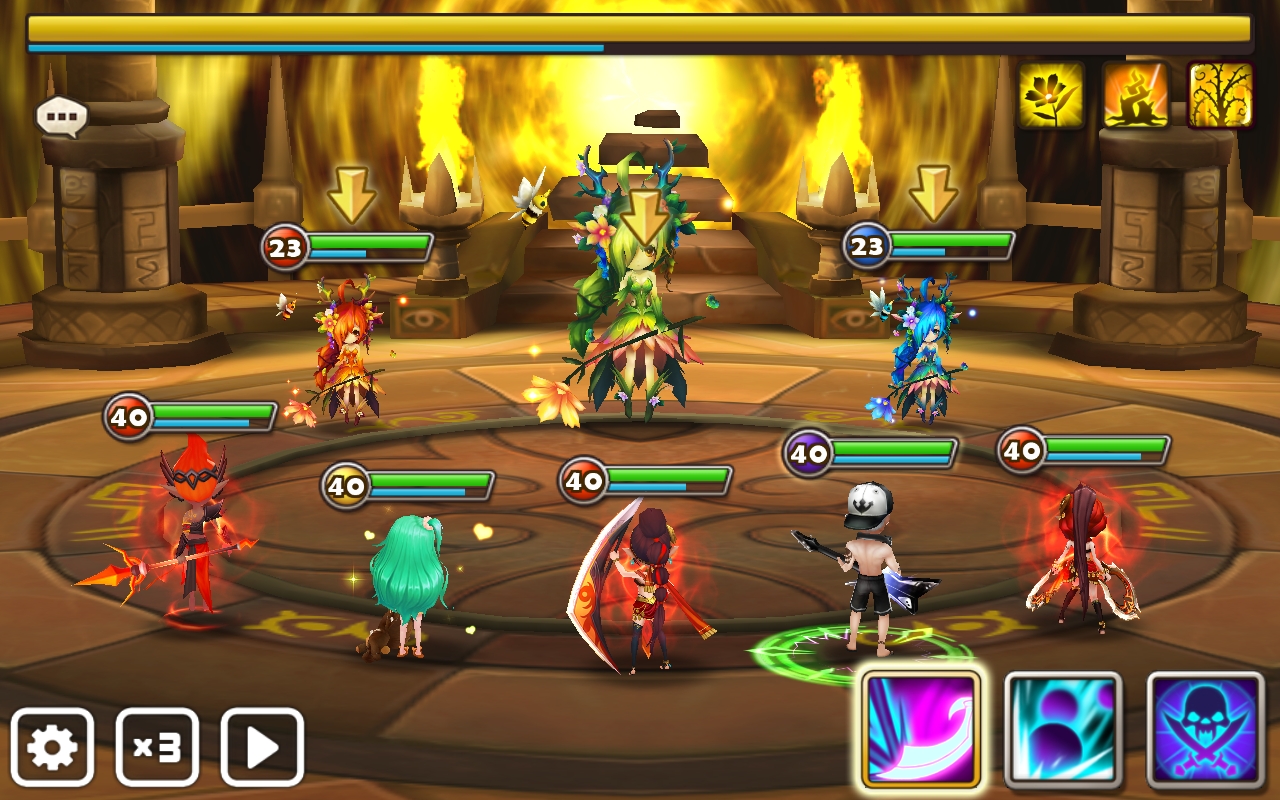 As always, the threat will always differ because the lackeys will differ. The boss will always be Mellia, though. The Threat: The threat will always differ because the lackeys will differ. In this case, though, the main threat here will be Herne, then Mellia, and then Nisha. Poor Nisha is always gonna be the worst of the Dryads, isn’t she? I’m so sorry, Nisha… The Solution: In this case, I’d go for Herne first, because we all know how nasty Oblivion is. You can actually just straight-up focus on Mellia if you want, because in Hall of Heroes, you don’t have to kill the lackeys in the boss or the miniboss phase. Anyway, I hoped you guys enjoyed this article, because I sure enjoyed writing it. How far did you get up to in HoH this time? Let me know in the comments, but in the meantime; I’m Sara Ann, and I’ll see you in the next article!]]>