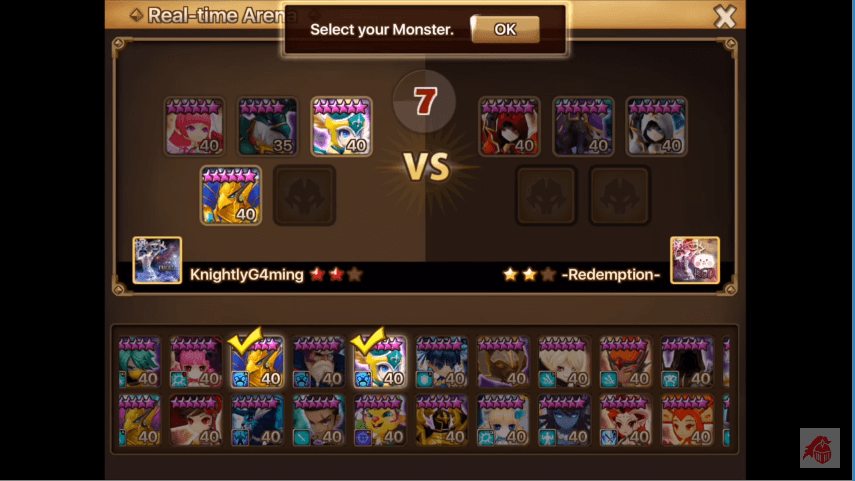 The wild card effect of banning units and the fact that you are playing against real people are two core aspects that add an additional layer of difficulty to the live arena. In the regular arena, you can bring a well-crafted speed-tuned group that functions well together and fulfills distinct roles, but in the live arena you are faced with with banned units that can ruin the entire strategy of your whombo-combo, and live opponents that will not always follow the rules of attribute advantage. Your delicate Whombo-combo isn’t going to work very well when your opponent bans your Galleon, and that enemy Seara is not going to try to bomb your will-runed water monster if there are other monsters without protection! Because of this additional layer of strategy, consistently winning in live pvp can be difficult, but I’ve got good news! I’m going to share two solid teams that do not require any Nat5 that you can use to win. Now the core of these teams is completely farmable/fusable, but there are some nat4 monsters that REALLY help if you have them (Chloe, and Lushen). You can make due without them, but it really helps if you do happen to have them. The strategy behind my two teams are 1) use defense ignoring combos so less set-up is required (no armor-break) and 2) create a team that still combos no matter what monster gets banned. Here is the first team:

Chloe – Back-up invincibility for Katarina Katarina – Fusable nat5 Bernard – Ensure you go first plus 30% attack leader Qebehsenuef or QB as I call him – Main Katarina buffer Wild card – Lushen or your strongest DPS dealer The idea behind this first group is a katarina whombo-combo. If they ban Chloe, QB can still give Katarina the buffs needed to combo. If they ban Katarina, Lushen is going to get an amp off with an attack leader and an attack buff. If they ban Bernard, Chloe will still protect you until it is your turn. If they ban QB, Chloe will still provide invincibility for Katarina. If they ban Lushen, your Katarina is still going to combo. As far as banning opponents, you want to ban anything that is going to make the enemy team faster than you, and if you know that you are going to be faster, then ban their buff remover. Double buff removers along with speed leaders are one of the only problems for this combo so be sure you are sneaky with your pick order. Pick Chloe and Bernard first, then Lushen and Katarina, then QB. The second team is more of a bruiser team. It is way tankier, but it takes longer to win than the Katarina combo.

Copper – DPS Defense buffer – Talc, Basalt, Randy, Emma, Wind Horus Defense leader – Talc, Chloe, Tiana is fantastic if you have her Healer – Talc, Emma, Belladeon, any other healer Wild card – Lushen or Verad if you have him works well. Tractor also works This team works the same way. You have two different defense buffers/healer/leaders so that you can’t be banned out of a combo, and if they ban your copper, you have your wild card to clean up for you. (Ideally a defense damage dealer like verad or Tractor) Using these combos will greatly increase your odds of winning in the live arena. –KnightlyGaming]]>