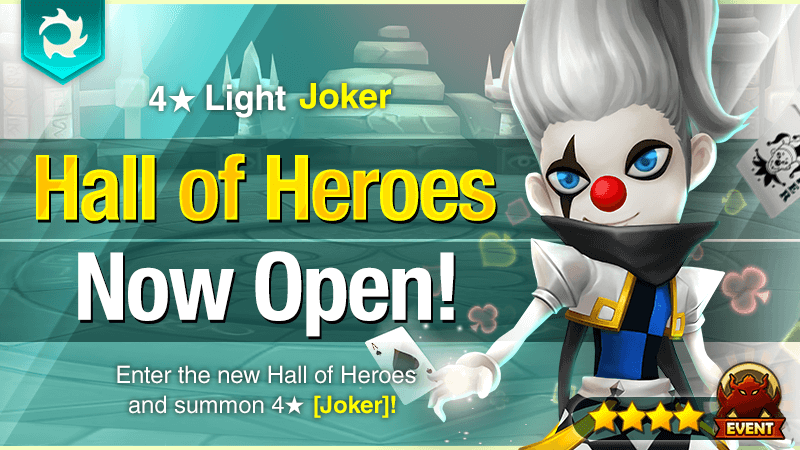 <![CDATA[On Wednesday, May the 7<sup>th, 2019, the Hall of Heroes for the light Joker Figaro was announced. Now, I myself would be happy about this for Lushen skillups, if it weren’t for two things: firstly, both my Lushens already have skillups. And, second of all, I got my first LnD lightning ever a few weeks ago! 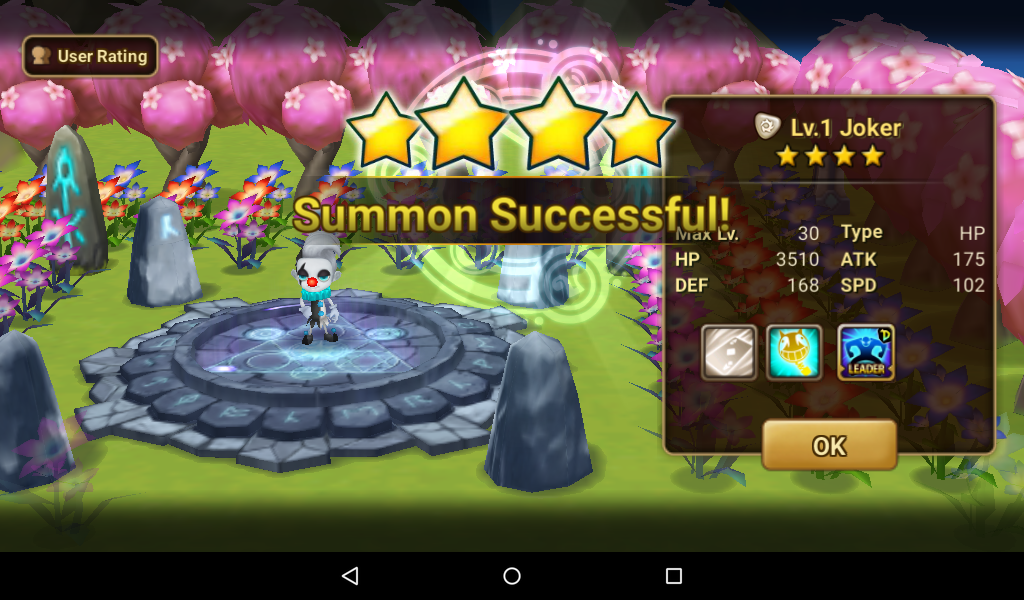 …yeah. please excuse me as i cry Before we begin, Hall of Heroes is a lot like Trial of Ascension, so that means you can use Trial of Ascension strategy and monsters (e.g. attack bar pushbacks, stuns and continuous damage are king). I strongly advise bringing your regular Trial of Ascension team. In my case, I’m using Baretta (L), Sabrina, Maruna, Shaina, and Charlotte. Let’s cut the chatter and get on with it!

Is this revenge, Com2uS? Are you mad at me for getting Brandia and Frigate from the wish and you want to hurt me in this way? Is that what this is? …ANY-way, yeah, you can actually use Figaro! He’s got Surprise Box as his second skill, where he attacks all enemies and applies a random debuff on them. This also works pretty well with his passive, Camouflage. He’ll have a 25% chance to cancel incoming damage, and every time he attacks an enemy, he’ll remove one beneficial effect off of them. This makes him a pretty good stripper in the Arena, but I’m not too sure what teams you can build with him. At this point, I’m not even motivated to try anything, knowing that mY FIRST EVER LND LIGHTNING IN ALMOST 1400 DAYS OF PLAYING IS A HALL OF HEROES NOW –

The Threat: Jojo seems like one of those monsters who, in any other area in the game, is terrible and should not be used if you have literally anyone else, but in Hall of Heroes he’s threatening and awful. Actually, a lot of mons are like that, come to think about it. Jojo is a threat mainly because of his second skill, Surprise Bomb, in which he gains 50% accuracy for this specific move, and then plants a bomb on all enemies that’ll detonate in 2 turns. He also has the third skill Fire Wall, which, as you may expect, attacks all enemies and leaves Continuous Damage on them for 3 turns. Basically, he’s a mini-Baretta and a budget bomber for Seara teams. He’s also fusion material for Sigmarus, which is always nice. Anyway, Soha is actually really good in general. I have one six-starred, and she does really well in quite a lot of places. Her third skill, Cleanse, attacks all enemies and removes all the beneficial effects of them. She also removes one harmful effect from all allies before she does this, too. To be honest, she reminds me a lot of Mav’s third skill. Her second skill, Soul Snatcher, also does a ton of damage – she attacks an enemy, heals herself for the amount of damage dealt, and the leftover damage is converted into a shield for 2 turns. In other words, big oof if she uses her third on you. The Solution: Bring your own cleansers. This is gonna be one of those Hall of Heroes where cleansers are great for your team, bonus points if you can bring your own strippers too. Someone like Veromos is recommended because he could instantly passive-cleanse the bombs away whenever he gets a turn, but I’m told that people don’t use him in lategame except as a Jeanne counter in RTA. To be honest, I’ve stopped using my own Veromos too. With the main threats of Jojo out of the way, let’s talk about Soha for a minute here. Did you know that you can actually strip shields off of people without having to completely break through? HP destroy isn’t recommended, though, because that means she heals herself easier, which in turn means more should to break through if you don’t have a stripper. In other words, take out Soha first while your Veromos cleanses the debuffs provided from Jojo. 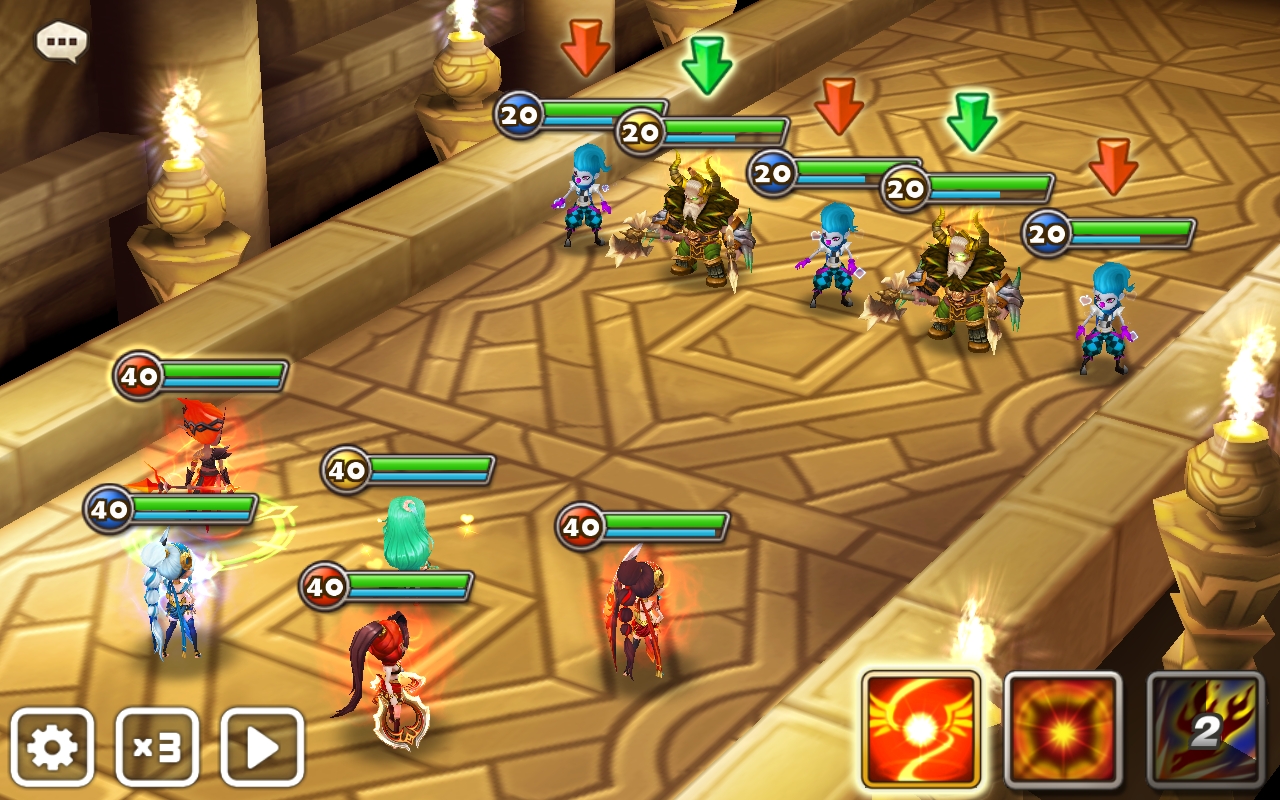 Oh boy, here we friggin’ go. So, here we have three Blueshens Sians (water Jokers) and two Hraesvelgs (wind Barbaric Kings). The Threat: Frickin’ Sian, people. He is almost the bane of my existence in ToA, next to Guillaume. Guillaume can go yeet himself off a cliff. ANYWAY, Sian isn’t really much to note about, except for his passive Revival Magic, in which he revives at the moment of death with 30% HP and gains Invincibility + Immunity, both for 1 turn. It’s very annoying. Hraesvelg, meanwhile, is the damage dealer of the team. His third skill, Resentment, attacks all enemies twice, increasing the attack power and attack speed of all allies for 2 turns, and then recovering his HP by 10% for every turn Resentment is on cooldown. Oh yeah, his speed also increases by 35 when it’s on cooldown. The Solution: Again, this dungeon is one where you really should’ve taken an AoE stripper. Like, they would work perfectly against this stage. They could steal Sian’s Invincibility, Hraesvelg’s speed and attack buffs, you name it. Either way, kill Hraesvelg first and then go for Sian. Bringing the buff stealer is highly recommended because you really don’t want him to get an attack in on you in the later stages. It really hurts. 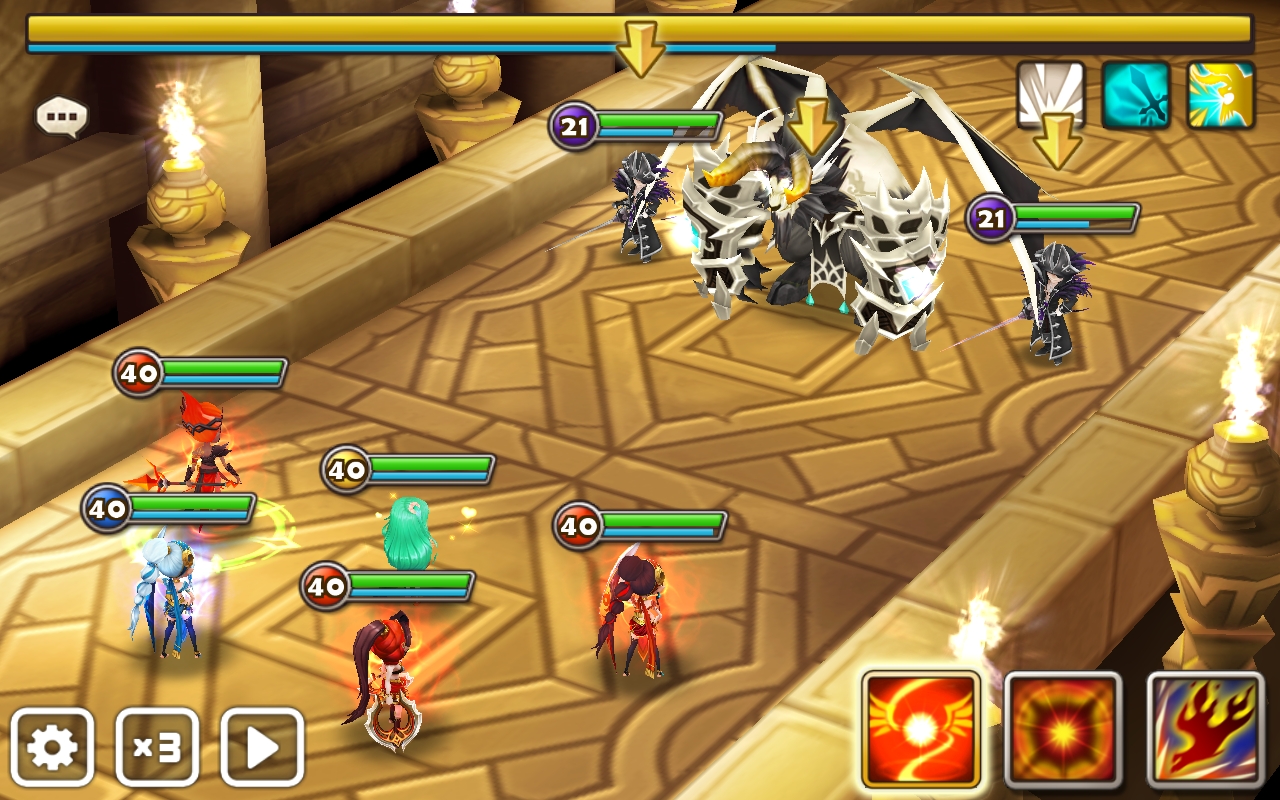 Swiggity swoss, it’s time for the miniboss! Here, we have a Shan (light Chimera) and two Frigates (dark Pirate Captains). The Threat: Okay, I can actually speak from the experience of the other side for this one, because I have a Frigate! Shan is the main damage dealer here, but that doesn’t mean that you should ignore Frigate. His third skill, Full Speed Ahead, increases everyone’s attack bar by 50% and then reduces their cooldowns by 1 turn. I use him in Arena and ToA for this because he has two uses – the speed booster, and the cooldown decrease both work great there. Shan, meanwhile, has Squall for his second skill, which means he’s gonna do a lot of damage. He also has the third skill Holy Calling, which has an 80% chance to stun all enemies, and then he increases his allies’ attack bar by 25% and their attack speed for 2 turns. The Solution: Take out Frigate first. I know, I know, this is Hall of Heroes and you don’t have to kill the lackeys to proceed anymore, but I always like to play it safe with Frigate in the mix and kill him before he can use Full Speed Ahead. When you advance on in Hall of Heroes, his base stats are gonna be super high, including speed. Once both Frigates are down, you can safely take out Shan. Make sure to keep his attack bar low, so that he can’t get a turn. 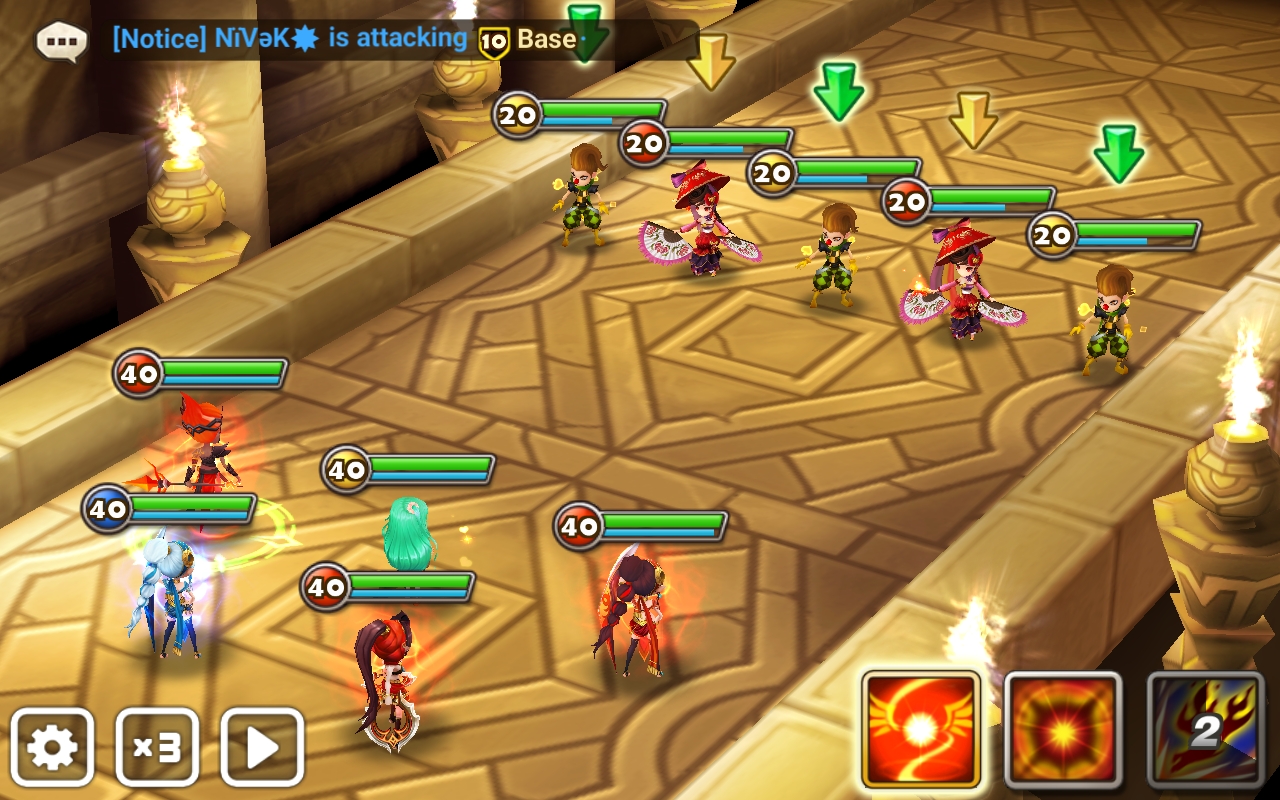 Imagine the chaos that would be caused if Lushen and Jojo swapped second skills. Here we have three Lushens (wind Jokers) and two Hwahees (fire Sky Dancers) The Threat: So Lushen is like, the best four-star monster ever, next to Galleon and Shaina. His third skill, Amputation Magic, attacks all enemies three times, ignoring their defense for each hit. He’s just, like, great. I love him. But that means he’s also a pain to deal with in Hall of Heroes. It also doesn’t help we have Hwahee, whose second skill, Amuse, heals everyone based off her attack power and increases their attack power for 3 turns. Her third skill, Pride Will Fall, will randomly attack enemies…I’d say about eight times. If she kills anyone with this hit, though, her third skill becomes instantly reusable. So in other words, I have died a lot here. The Solution: Take out the Lushens first. Holy poo I am not kidding when I say this. Lushen may have a ton of damage to deal, but he’s also squishy. Once you kill all three (while making sure they don’t use Amputation Magic) you can safely take out Hwahee. She can deal damage herself, but the main person to worry about here is Lushen. 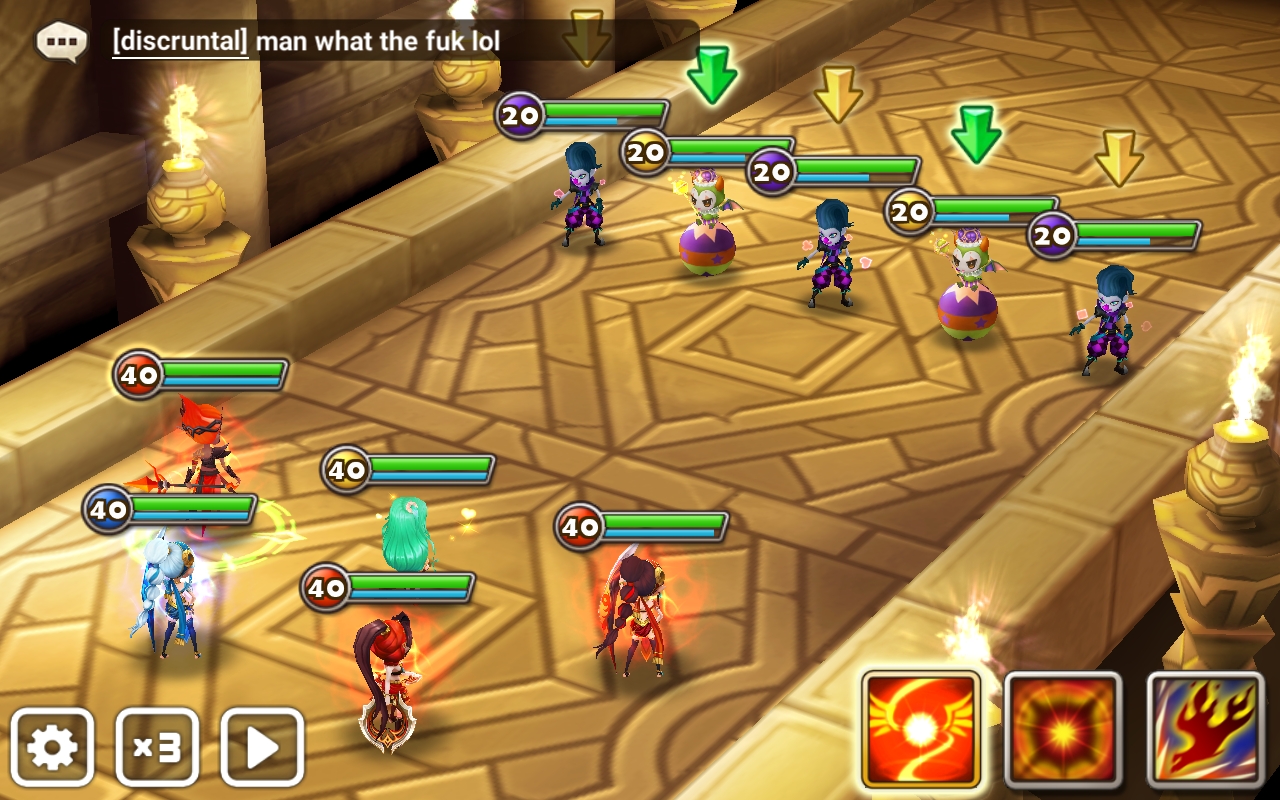 One more stage before the boss! Here, we have three Lieblis (dark Jokers) and two Aquilas (wind Brownie Magicians) The Threat: Did you know that Soha and Aquila are the only two four-star monsters who have a complete AoE strip skill? It’s true; you can look for yourself! Anyway, Aquila has Unexpected Exposure, which attacks all enemies and removes their beneficial effects. He also has the second skill Fever Time, which buffs all allies’ attack power for 2 turns and also raises their chances of landing a Critical Hit for 2 turns as well. Oh yeah, Liebli is also considered the second best Joker, next to Lushen. He has the Surprise Bomb second skill, and the passive Shadow Revenge, where he’ll counterattack every time he’s hit. Every time he’s hit, he’ll also decrease the cooltime of his skills, which basically means that if you keep hitting him, he’ll be able to infinitely plant bombs on you. The Solution: Stun Liebli as you work on Aquila. If he’s stunned, he can’t counterattack you, which is always a bonus. Once Aquila’s dead, you can safely get to work on killing Liebli, and then when all three of the Lieblis are dead, you can now safely move on to the boss stage! 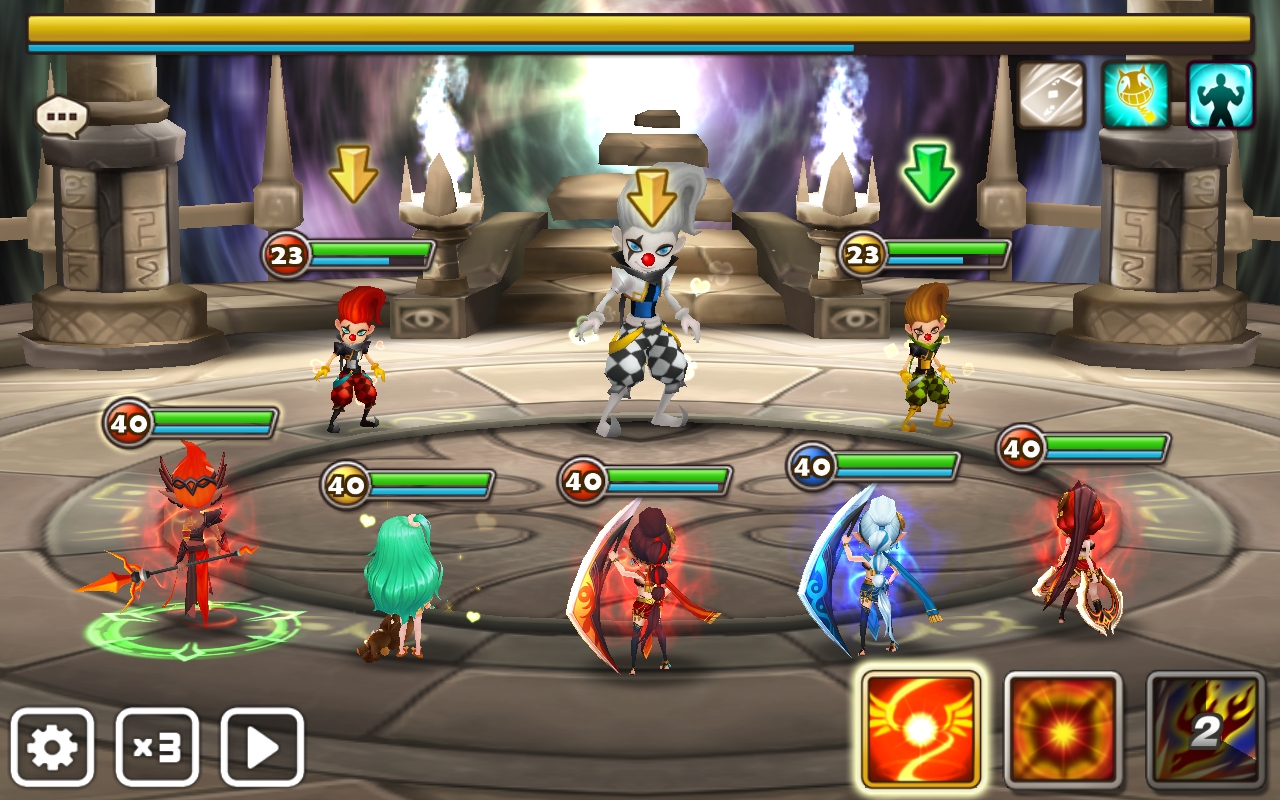 It’s boss time, people! This stage has the most variety out of all the stages, because the lackeys are going to be different elements each stage. In this case, here we have Figaro, Jojo and Lushen. The Threat: Again, the threat differs all the time because the lackeys differ. In this case, though, I’d say Lushen is the biggest threat, next to Jojo and then Figaro. The Solution: Take out Lushen first, stun Jojo, and then work on Figaro. Killing Figaro is gonna be a bit more difficult to kill, due to his passive being random and you never know which hit will land or not, but it should be easy enough. I hope you all enjoyed this Hall of Heroes more than I did, and that you were not as unlucky as I was. Yeah, I’m gonna be salty about that for a while, but I digress. I’m Sara Ann, and I’ll see you in the next article!]]>