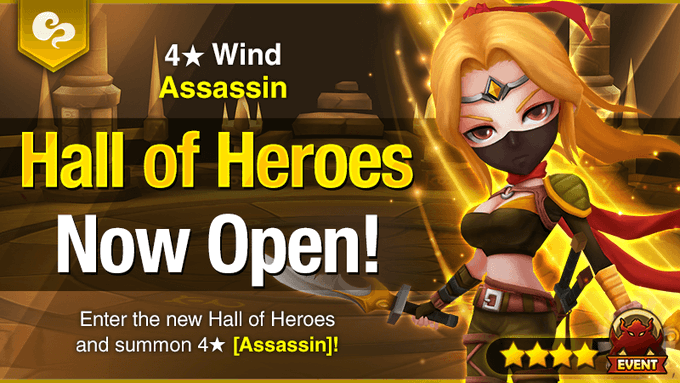 I mean, she’s not the meta, but she does have a halfway decent kit, if you ask me. Her second skill, Capture Opportunity, increases Attack Power and Critical Rate of herself for 2 turns before instantly granting herself another turn. Now, her third skill, Shadow Assault, is where things really start to get fun. She attacks an enemy, making them unhealable for 2 turns. However, if she kills an enemy with this attack, she’ll attack another enemy with the same skill, only this time with 30% more damage. (For the record, no, she cannot go into an infinite kill-spree with this skill. I already tried…) 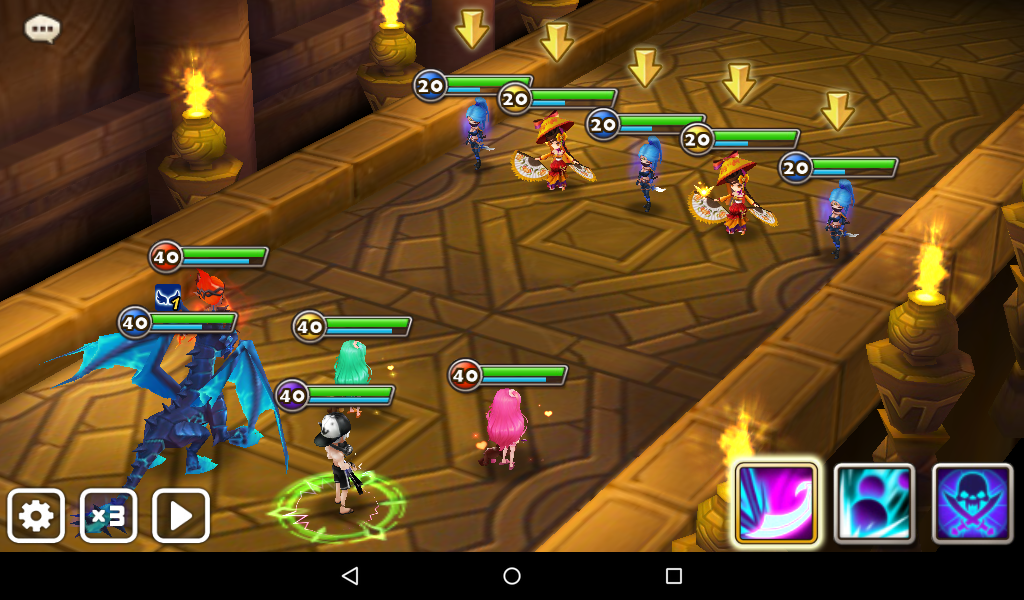 Let’s start with stage 1. Here, we have three Stellas (water Assassins) and two Chasuns (wind Sky Dancers). The Threat: So, these two actually used to be really good way back when. They’ve fallen out of use, Stella specifically because she’s really stat-hungry, but that doesn’t mean they’re bad. I’ve rambled about Chasun about a million times now, so I think we all know what she does. Stella, meanwhile, is pretty good. Her third skill, Blade Dance of the Reaper, attacks an enemy up to 7 times and decreases their attack bar by 10% per hit. The amount of hits depends on her speed, and her third skill won’t go on cooldown if she kills someone. The Solution: I’d say take out Chasun first. Having such a good healer on the team isn’t fun, especially when she wipes out all the damage that you’ve been doing to the enemy. You don’t have to worry too hard about Stella, because if you decrease her speed, you should be fine. 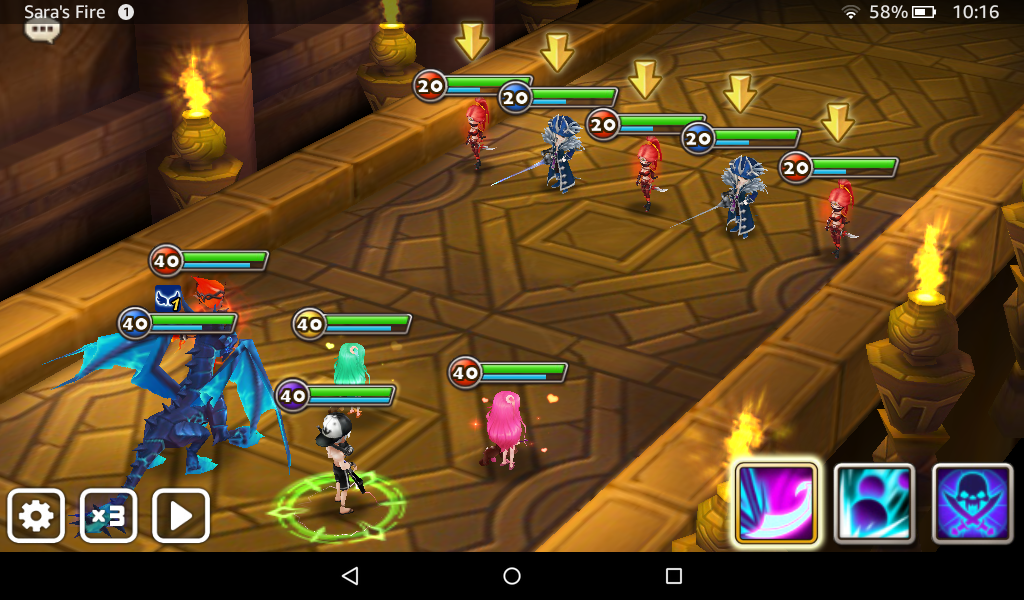 Welcome to stage 2. Here, we have three Lexys (fire Assassins) and two Galleons (water Pirate Captains). The Threat: Hoo boy. So we have a twofer here. First of all, Galleon is one of the best four-star monsters in the game, I love him, he’s great. He weakens the defense of all enemies for 2 turns, while increasing all allies ATK for 2 turns. It’s a really deadly combo. Lexy, meanwhile, actually has had a HoH before. Her passive, Deadly Seduction, is a bit odd. She reduces the damage all her allies take by 15%, but she decreases the recovery amount of everyone in the battlefield by 50%. That means, if you take Lexy into a PVP battle, the enemy Yeonhong will only heal by 25%, while at the same time the ally Abellio only heals by 15%. And the enemy team doesn’t have anything that heals here. The Solution: Ohhhhh, definitely go for Lexy. She’s the main source of damage and damage reduction, so once you attack her and get rid of her, you’ll be able to deal with Galleon, no problem. 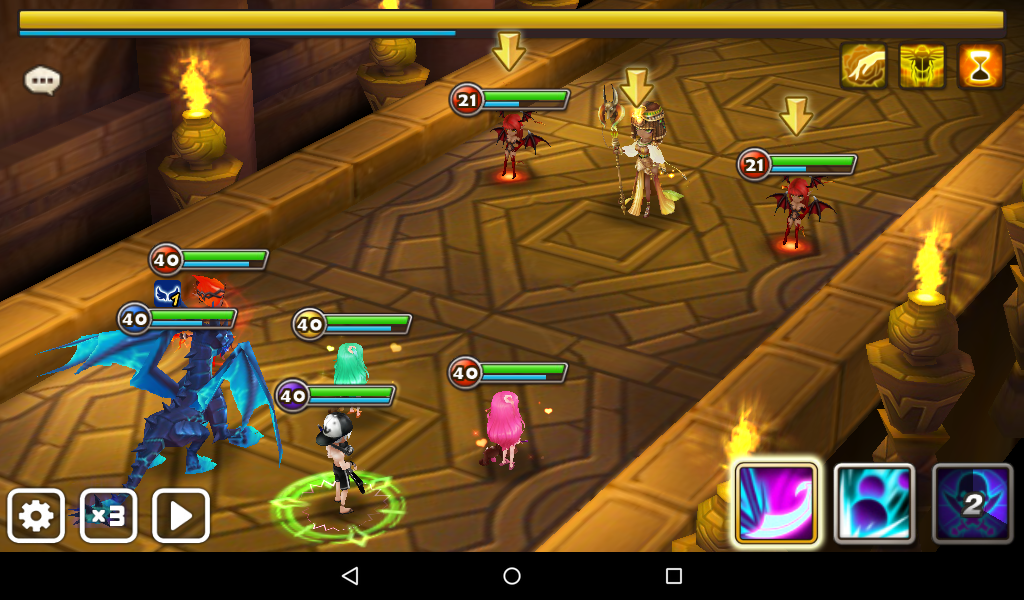 We’re at the miniboss! It’s the halfway point until you’re done! Here, the miniboss is a Hathor (wind Desert Queen) and two Akias (fire Succubi). The Threat: The threat here is definitely Hathor. Hooo boi, I do NOT like Hathor one bit. Her third skill, Delayed Promise, resets the attack bar of a chosen enemy, before decreasing the attack bar of all other enemies by 30%. However, she does put everyone to sleep for 2 turns. (Just know that this could be worse. It could be pre-buff Hathor, who just decreased everyone’s attack bar by 75% and still hit the sleep.) Anyway, her lackeys, Akia, really act as a complement to her. The Succubi’s main gimmick is that they don’t wake up enemies who are asleep, even when they attack someone. And since Akia has an AoE attack… well, I’m sure you can get the gist of it. The Solution: Did you know that you don’t have to kill the lackeys anymore in order to proceed? It’s true; if you’re having problems with this stage, you could take out both Akias, or you could just nuke Hathor and be done with it. Either way, as long as you kill the boss, you’re good. 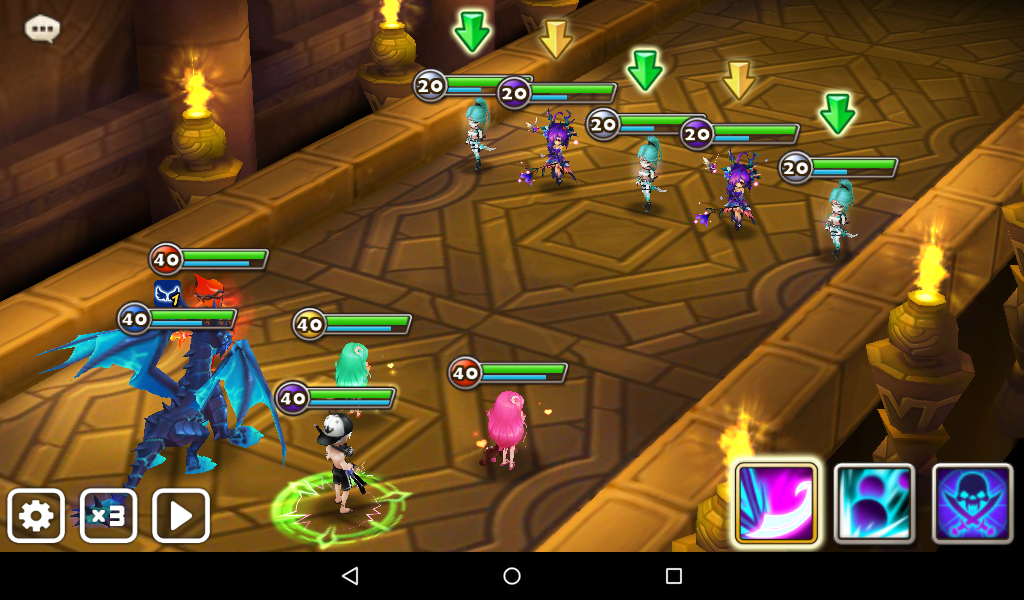 Alright, we’re more than halfway through! This stage consists of three Natalies (light Assassins) and two Hyanes’ (dark Dryads). The Threat: Fun fact: Natalie was actually a HoH… like, two and a half years ago? I think she was the September 2017 Hall of Heroes. But anyway, let’s talk about what she does. Her third skill, Silent Reaper, attacks an enemy, and Silences them for 2 turns. However, if she kills the enemy with this skill, she’ll Silence all other remaining enemies for 2 turns. Hyanes, however, is really good. Her third skill, Mandrake, not only has a hilarious animation, but it works quite well with Natalie’s Silent Reaper effect. She attacks all enemies, decreasing the duration of buffs for 1 turn and increasing the duration of debuffs for 1 turn. As such, she can cause Silence for 3 turns on all of your teammates. The Solution: I’m gonna have to say take out Hyanes first. She’ll end up increasing the Silence that Natalie creates, and as long as your mons are tanky enough, Natalie herself won’t be able to plant Silence on everyone. Once both the Hyanes’ are dead, you can chip away at all three of the Natalies’ HP and move on to stage 5. 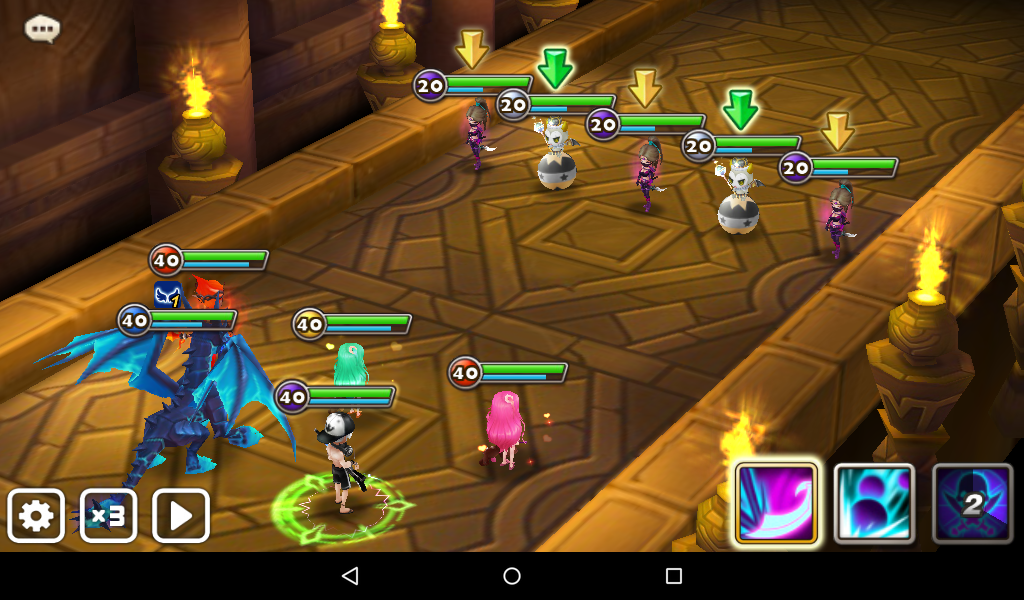 We’re at the final stage before the boss! Here, we have three Isabelles (dark Assassins) and two Geminis (light Brownie Magicians). The Threat: Isabelle has also had a HoH before. It was the January 2019 HoH. (I actually thought it was the 2020 HoH. Crazy how fast the time flies, huh?) She also has the Capture Opportunity second skill, but her third skill, Endless Death, is where things start to get fun. She deals damage to an enemy, instantly gaining another turn if the enemy dies. However, if anyone in the battlefield dies – ally or enemy – she’ll instantly refresh her cooldown of Endless Death. Gemini is quite fun to mess with. His passive, Small Grudge, increases his Attack Power by 50% if his HP ratio is lower than his targeted enemy’s HP ratio. He also removes 1 buff off of the enemy if he has less buffs than his enemy. As such, and the fact he was a HoH many years ago, this makes him a great budget buff remover. The Solution: I’d definitely say go for Gemini first. Since this stage doesn’t have anything that can AoE buff anyone, it’s a bit dangerous if you have anyone that can buff your allies, but if you keep the buffs away, you should be good. After that, you can work on Isabelle until it’s boss time. 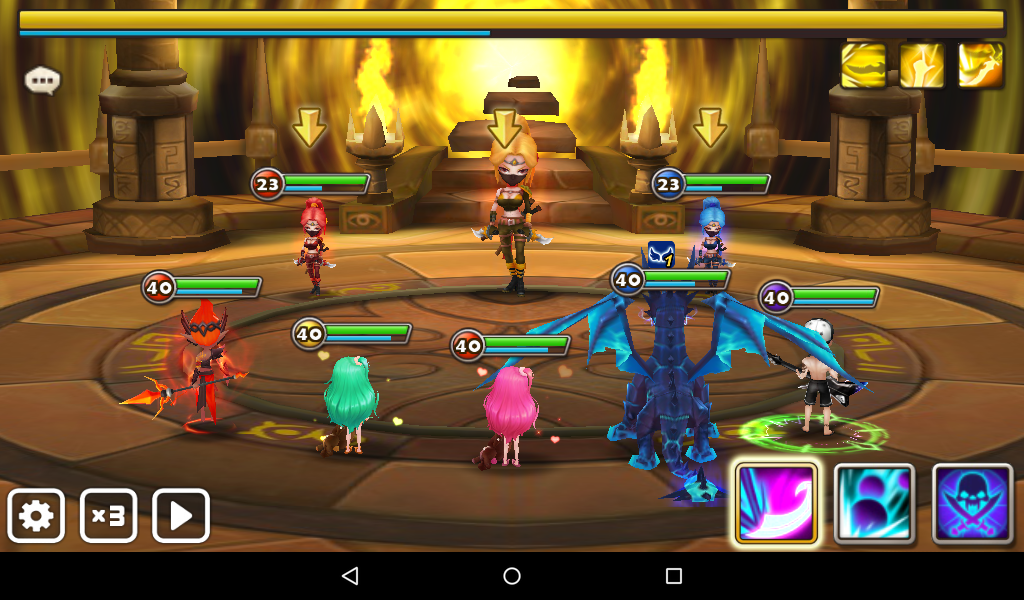 We’re at the final boss of the HoH now! Here, we have a Tanya as the boss, and two other different element Assassins as her lackeys. The Threat: The threat will always be different, because of the fact the lackeys change element with each floor. In this case, though, I’d definitely say that Stella is the most threatening unit. Lexy is more of an annoying support unit, and Tanya is backup damage. The Solution: Like the threat, the solution will be different because the lackeys will be different. If this were a higher stage, I’d say go for Lexy first (to mitigate damage), then take out Stella, before you go for Tanya. But since it isn’t, I’d say just nuke them. I hope you all enjoyed this article! How many Tanyas did you get? I’m currently at B4 at this writing, because I haven’t had much time to farm HoH at the time. In the meantime, though, I’m Sara Ann, and I’ll see you in the next article!]]>