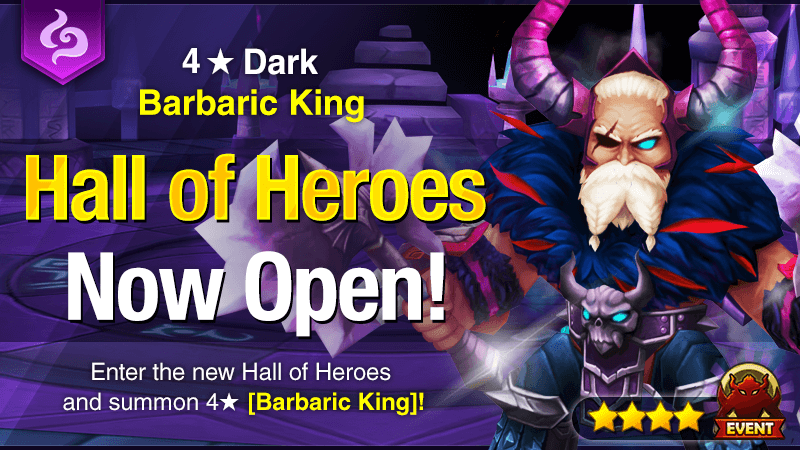 <![CDATA[On Wednesday, November the 6<sup>th, the Dark Barbaric King (Hrungnir) Hall of Heroes was announced! To be honest, I think almost everyone thought it was a joke at first, because Hrungnir is, like, really really good. He’s a bit of a niche unit, but he really excels at what he does, and that is proc’ing like there’s no tomorrow. I’m actually super hyped for this HoH. Before we begin, Hall of Heroes is a lot like Trial of Ascension, so that means you can use Trial of Ascension strategy and monsters (e.g. attack bar pushbacks, stuns and continuous damage are king). I strongly advise bringing your regular Trial of Ascension team. In my case, I’m using Baretta (L), my water Homunculus Kaneki (Ice Mist path), Verad, Frigate, and Charlotte, because Shaina got nerfed hard and I am now unable to use her in ToAH. Let’s cut the chatter and get on with it!

Yes. Very usable. There are two main uses for him, now that his water brother Aegir has become the RTA meta. Most people are going to use him as Aegir skillups now, or they’re going to use him as the fun GW toy he is. To be honest, I’m totally gonna build at least one of my Hrungnirs since I don’t use Aegir at all, though I do have a 5-star one I built a while back when I was first breaking into DB10. He’s mainly known for his third skill Frenzy, in which he becomes enraged, attacks an enemy target, instantly gains another turn, and has a 40% chance to prevent Frenzy from going on cooldown. However, if it does go on cooldown, he gains 35 speed and recovers 10% of his HP every turn. It’s absolutely bonkers. I love it. 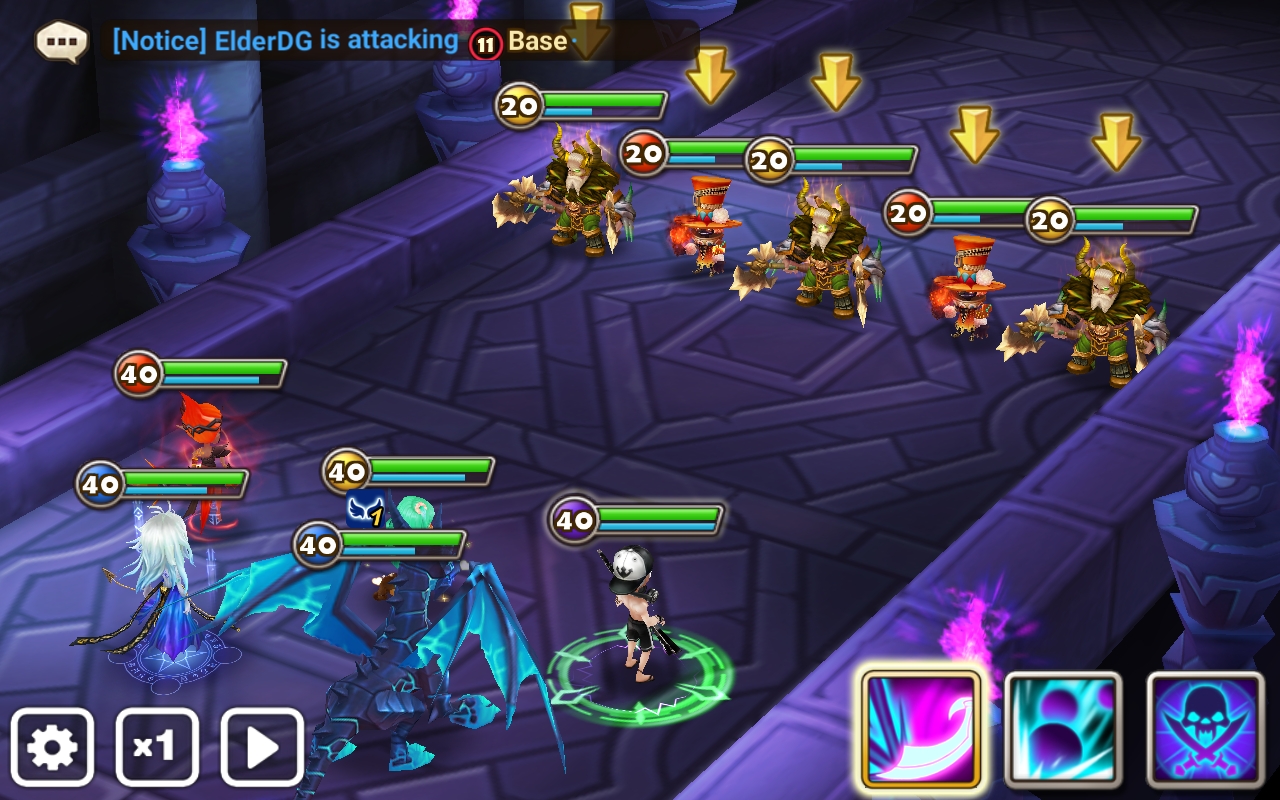 It’s time for the best Hall of Heroes in recent memory to start! We start off by facing three Hraesvelgs (wind Barbaric Kings) and two Ludos (fire Dice Magicians). The Threat: I’m going to be real, Hraesvelg is a big threat. He’s probably one of the better Barbaric Kings – but to be honest, everyone except the fire one is decent – and is well used in places like the Ice Rift and GB10. His third skill, Resentment, attacks all enemies twice, and then he’ll increase the Attack Power and Attack Speed of all his allies for 2 turns. Whenever Resentment is on cooldown, he’ll increase his speed by 35 and then heal himself by 10% HP every turn. Ludo, meanwhile, has the passive Roll Again. At the start of each turn, he’ll roll a die. The damage he inflicts on that turn will be increased up to 70% if the die number he rolls is large, and the damage he takes will be reduced by 70% if the die number is small. The Solution: You can easily stun Ludo and prevent him from ever getting a turn so he can’t proc his passive, meaning that you’re left to safely work on the Hraesvelgs. Fun fact: I’ve had to look up his name at least three times now because my brain refuses to retain the knowledge of how to correctly spell his name. It’s like Qebehsenuef, the water Horus. 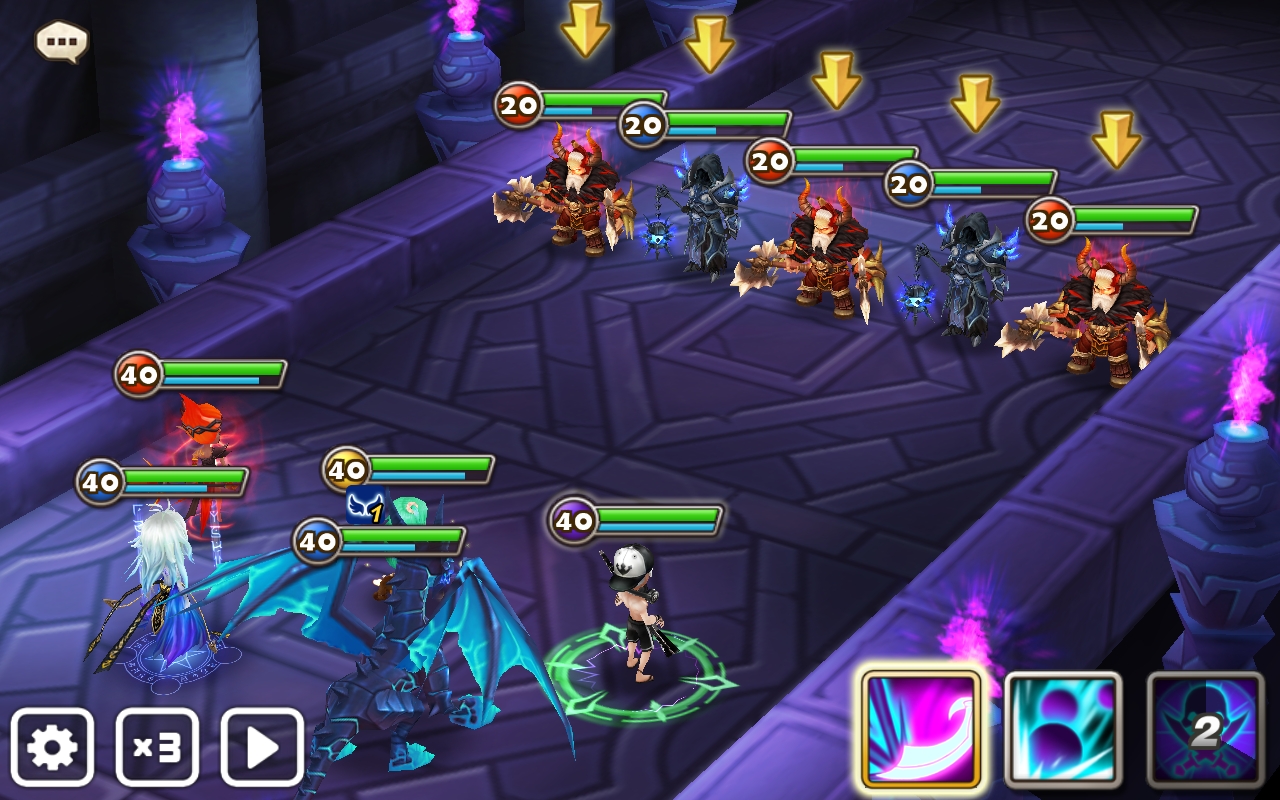 Alright, people, let’s do this. Here, stage 2 is made of three Surtrs (fire Barbaric Kings) and two Fedoras (water Death Knights) The Threat: Depends on what kind of threat you mean. If you mean “kill you to death” threat, it’s going to be Surtr. If you mean, “can destroy all the progress you’re making” threat, it’s definitely Fedora. Fedora’s third skill, Decline, removes all harmful effects off of his allies, gives them Immunity for 2 turns, and then plants Endure for 1 turn. That means all his allies cannot die for 1 turn. It’s not fun to deal with. I really don’t like dealing with him, because if you let any of them get a turn, that’s it, game over, buddy-o. Anyway, Surtr can kill you. His third skill Summary Conviction will attack one enemy, ignoring all effects that can resist death – that means Endure, Triana’s passive, and more can and will be ignored. If his third skill’s on cooldown, his speed will increase by 35 and he’ll heal himself by 10% of his HP at the start of every turn. The Solution: Kill the Fedoras first. Holy poo, I can’t tell you how many times he’s ended up using Decline on me and I’ve had to start the round. It’s awful to deal with, and it’s even worse when you’re on a higher floor. Surtr actually isn’t that bad to deal with, damage wise. All of his skills are single-target, so he can’t wipe your team in one turn. I guess that means the greatest threat in this stage is, in fact, Fedora, and not “depends on what you mean.” 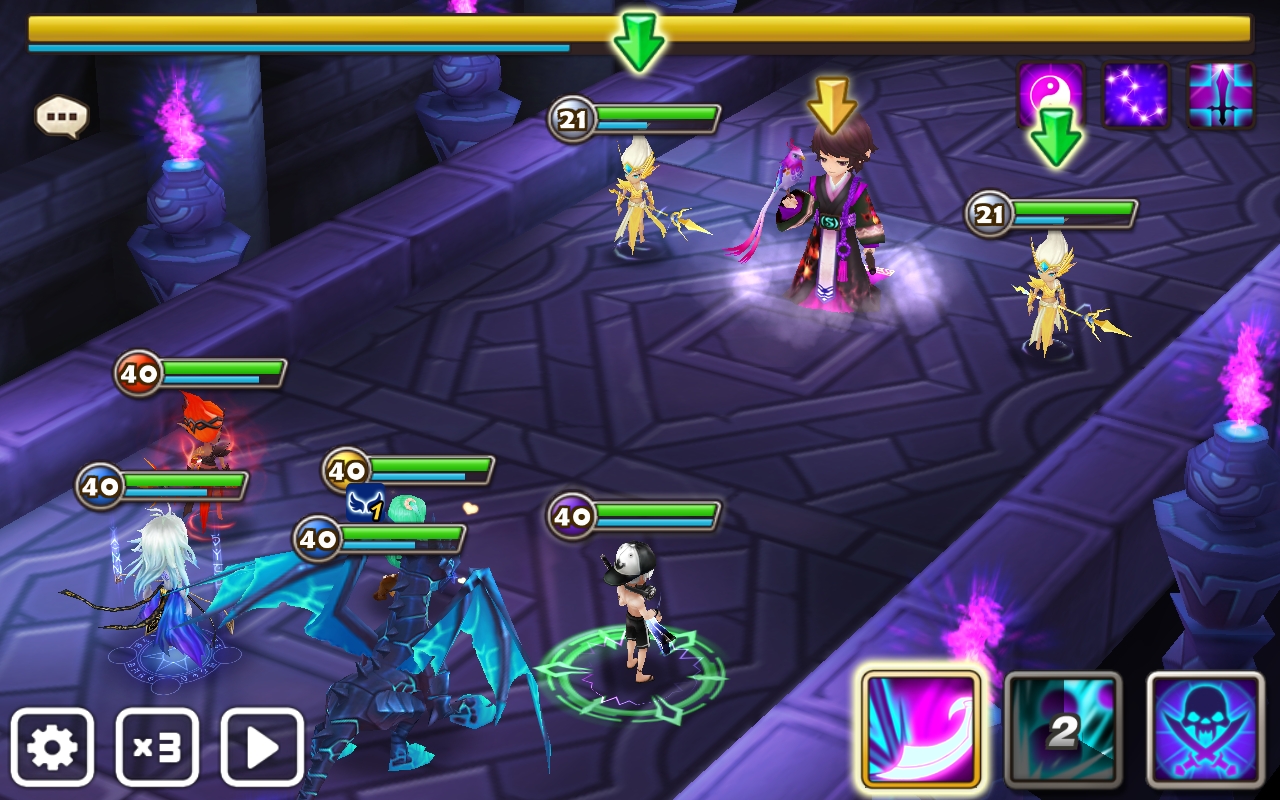 Miniboss time! Did you know that the miniboss is usually always a nat5, is the same element as the boss, and the elements of its lackeys is the element the boss’s element is weakest against? Here, we have a Woonsa (dark Pioneer) and two Eredases (light Sylphs) The Threat: I’m gonna be real here, Woonsa is the real reason why I died so much at this HoH. His third skill, Inhale Magic, will steal the HP of all enemies by 15% of his Max HP and will steal all their beneficial effects. He’ll also increase the attack bar of all allies by 20% if he successfully steals beneficial effects. Eredas isn’t really worth talking about, honestly. His third skill, Double Cyclone, will attack all enemies four (yes, four) times. Each attack of his has a 20% chance to stun all enemies and absorbs their attack bar by 20%. The Solution: Woonsa is the monster you want to deal with. Stun the Eredas’s for all I care, but kill that Woonsa. Keep him locked down, never let him get a turn. When I got to B7, 15% of his Max HP was more than 100% of my Charlotte’s HP. 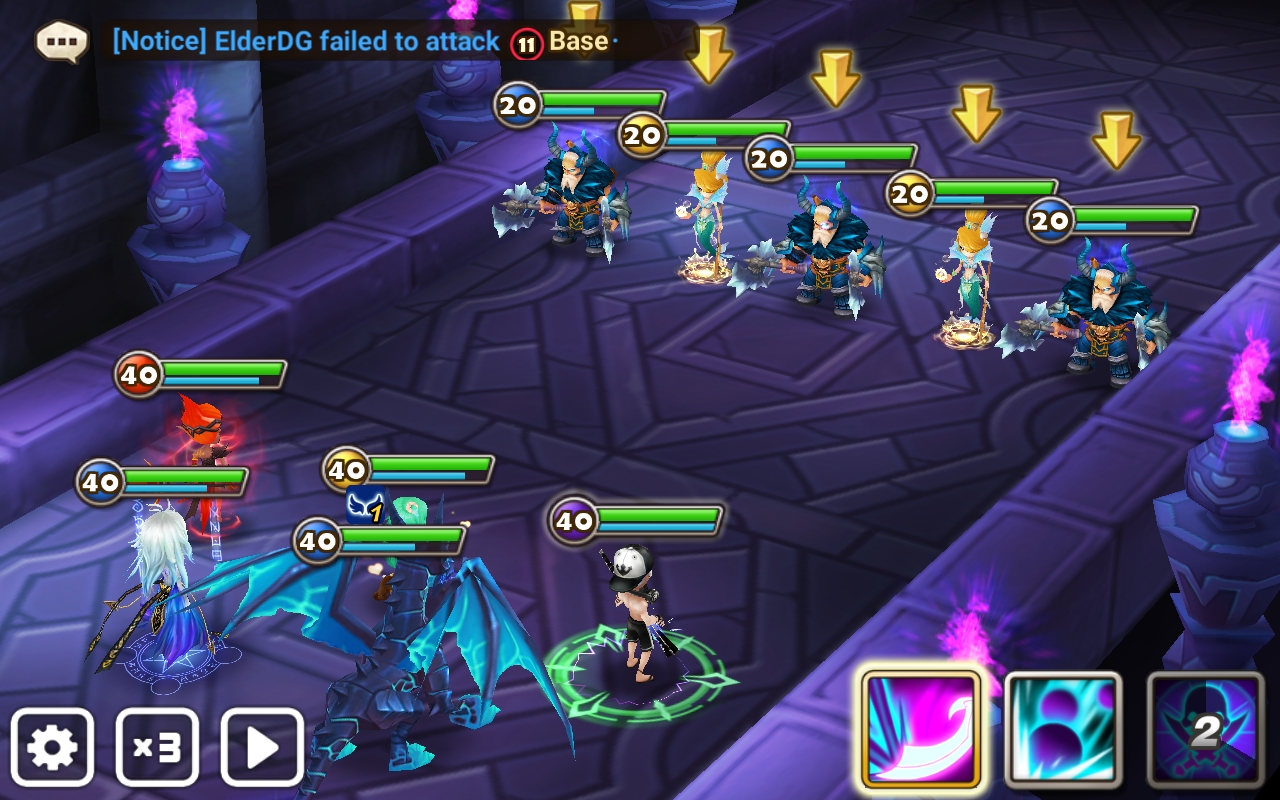 I’m not sure if any of you have seen that Tumblr post yet, but apparently, Comic Sans makes it really easy to write pretty much anything. I managed to write this in an hour and a half max. In fact, I’m writing this in Comic Sans right now on my Word doc. Anyway, we have three Aegirs (water Barbaric Kings) and two Cichlids (wind Mermaids). The Threat: Aegir. Definitely Aegir. He got buffed a while back, and now it’s not hard to see why he rocketed to a good F2P RTA meta unit since them. Even when I built him way before his buff, he was fun to play wish. His third skill, Confiscate, attacks an enemy twice, with each attack having a 75% chance to steal a beneficial effect from the enemy. However, if they don’t have any beneficial effects, he’ll absorb 50% of their attack bar per hit. When it’s on cool down, his speed increases by 35 and he’ll heal 10% of his HP every turn. That’s not to say that Cichlid isn’t dangerous, though. Her third skill, Crushed Hopes, attacks an enemy three times. The first hit can remove beneficial effects. Each attack, though, also breaks the enemy’s defense for 2 turns and also has a 50% chance to increase the enemy’s cooltime by 2 turns as well. The Solution: Kill Aegir first. Cichlid is okay to deal with on her own, but Aegir just starts cycling turns and can demolish you if you’re not careful. In the meantime, you can stun Cichlid while you work on the Aegirs. 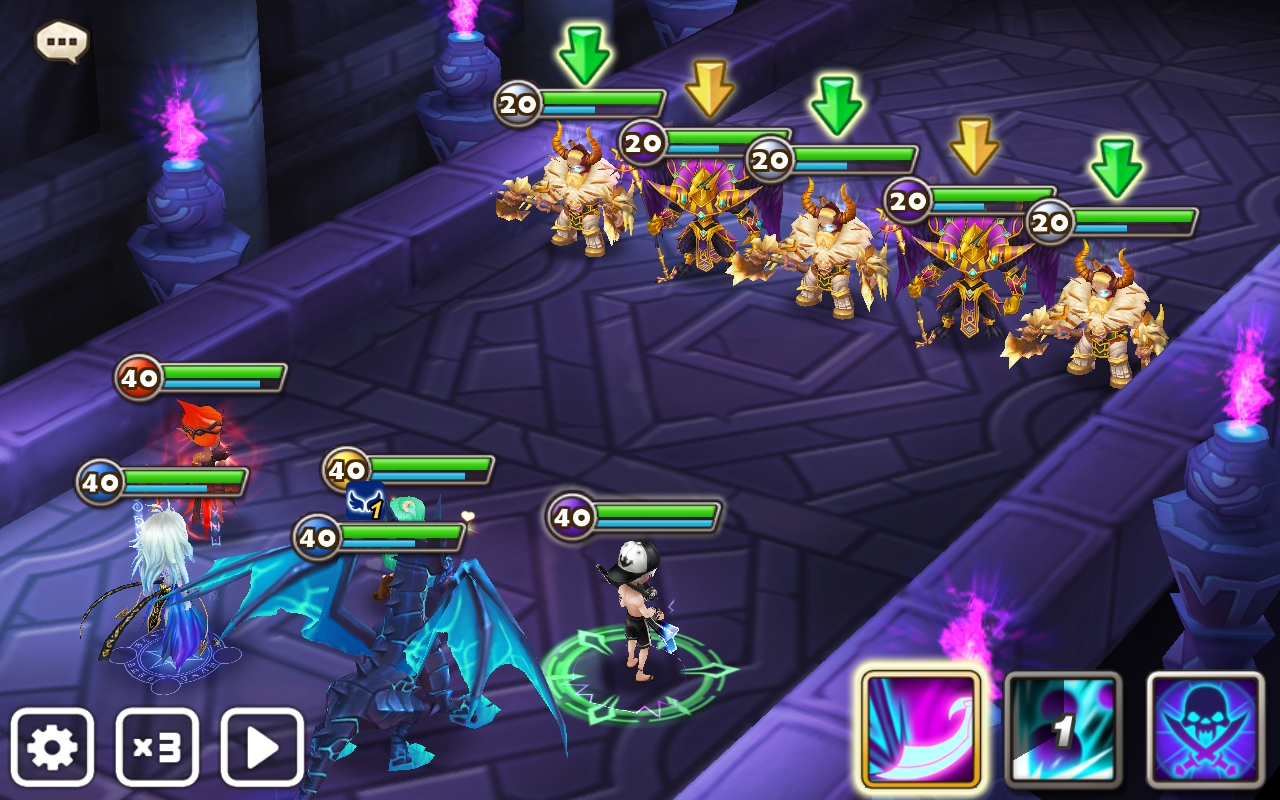 It’s the final stage before the boss! Here, we have three Mimirrs (light Barbaric Kings) and two Amduats (dark Horuses) The Threat: So, I’d be the first to admit that, though my LnD lightnings are few and far in between, the content of the lightning is great. I’ve only had 3 LnD lightnings in my lifetime, and they were, in order: Figaro (2 weeks before his HoH), Amarna, and Icares. I also got my Frigate awakened from the wish early game. Now, the reason why I’m telling you that is because Amduat is one of the LnD 4 stars that I really want. He seems like he could be a fun toy to play with. His passive, Tip of the Spear, is simple: increases his attack bar by 25% whenever an enemy gets a turn. He can easily cut into your team comps. Mimirr, meanwhile, is also someone who looks like he could be interesting to play with. His third skill Confine attacks an enemy target, depletes its attack bar and stuns them for 1 turn. I’m sure you know what the gimmick of the Barbaric Kings’ third skills is, but in case not, whenever his third skill is on cooldown, he gains 35 speed and heals 10% of his HP each turn. The Solution: We’re almost at the boss! We’re so close! You can easily take care of the Amduats by stunning or straight-up killing them on the first few turns, so they can’t cut into your team comps. Thankfully, they don’t have any built-in additional turns in their kit, so you won’t have to worry about them proccing out. The Mimirrs are easily to deal with; I’ve noticed they’re pretty squishy, even in the higher up levels. The damage they deal is really painful, though. Don’t let them attack you. 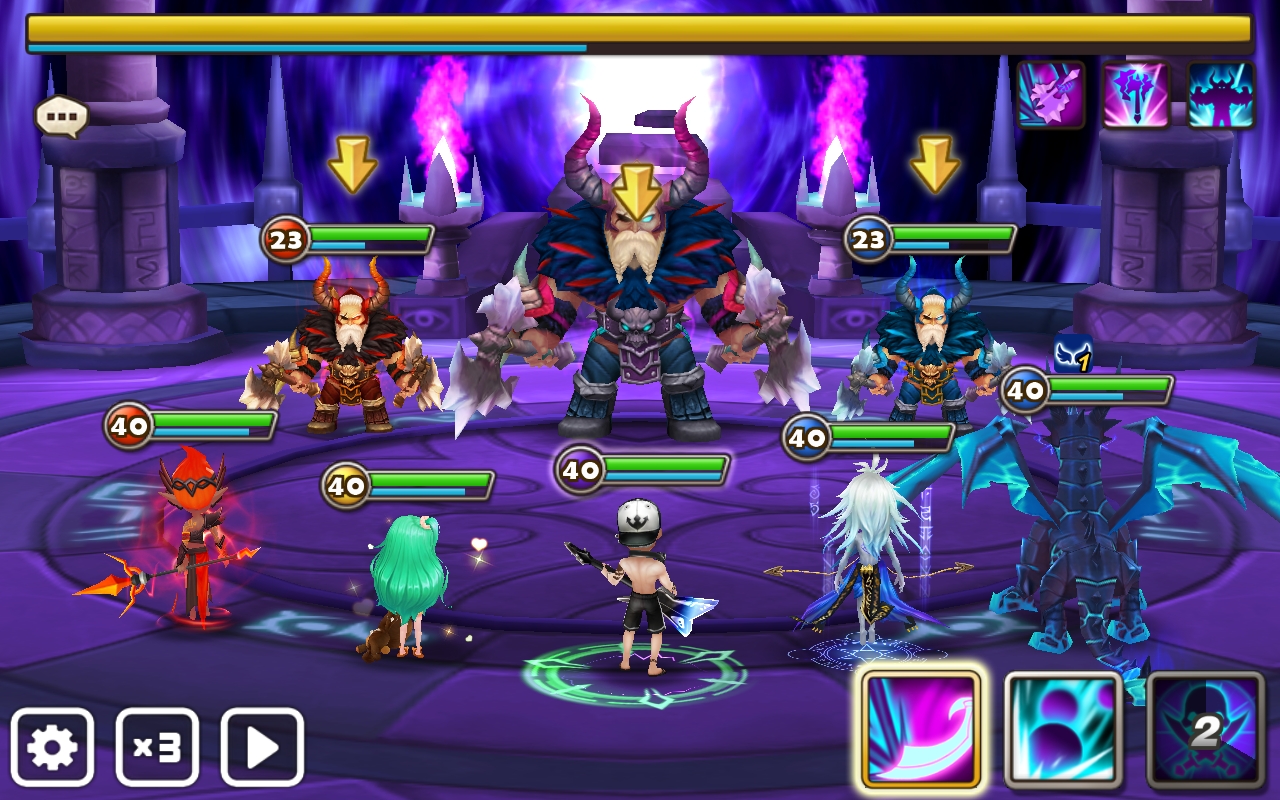 Boss stage! This stage will have the most variety, because the element of Hrungnir’s lackeys will be different each stage. In this case, though, we have a Hrungnir, a Surtr, and an Aegir. (Why are nearly all the Barbaric Kings’ names so difficult to correctly type the first time?) The Threat: Well, the threat’s going to be different each stage, so I can’t give you a one-size-fits-all advice. For this stage though, if it were higher up, I’d say that Aegir’s the biggest threat, followed by Hrungnir and Surtr. The Solution: Like with the threat, the solution differs because the elements of the lackeys differ. In this case, though, if this were a higher up floor, I’d say take out Aegir, ignore Surtr, and just go wild on Hrungnir. I hope you all enjoyed this Hall of Heroes article! How far did you get up to? Let me know in the comments down the below. Sorry that October was a slow month article-wise; I had a bunch of stuff I had to deal with. In the meantime, though, I’m Sara Ann, and I’ll see you in the next article!]]>