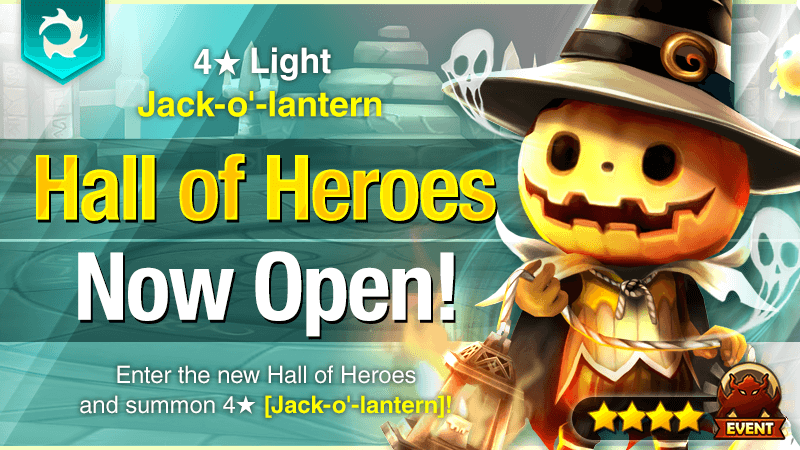 <![CDATA[On Wednesday, October the 9<sup>th, 2019, the light Jack-o-Lantern Misty’s Hall of Heroes was announced. Ever since the Jack-o-Lanterns were released, it’s sort of been a Com2uS tradition to make the October HoH one of the Jack-o-Lanterns, and this year is no different. Before we begin, Hall of Heroes is a lot like Trial of Ascension, so that means you can use Trial of Ascension strategy and monsters (e.g. attack bar pushbacks, stuns and continuous damage are king). I strongly advise bringing your regular Trial of Ascension team. In my case, I’m using Baretta (L), my water Homunculus Kaneki (Ice Mist path), Verad, Frigate, and Charlotte, because Shaina got nerfed hard and I am now unable to use her in ToAH. Let’s cut the chatter and get on with it!

Nope. She’s…really kind of useless. In fact, all the pumpkins except Chilling are the duds in the family. Chilling is actually really good, though, because he strips buffs off enemies with every hit, so if nothing else, you could just use Misty for Chilling skillups. Now, Misty’s passive on paper does sound nice: she becomes immune against inability effects (no sleep, stun or freeze), increases her attack power by 20% for every buff she has on her, and increases her attack speed for every debuff on her. However, she still needs debuffs in order to increase her attack speed. So defense break, attack break, and more, they’re all fair game. But they still make Misty easier to be killed. 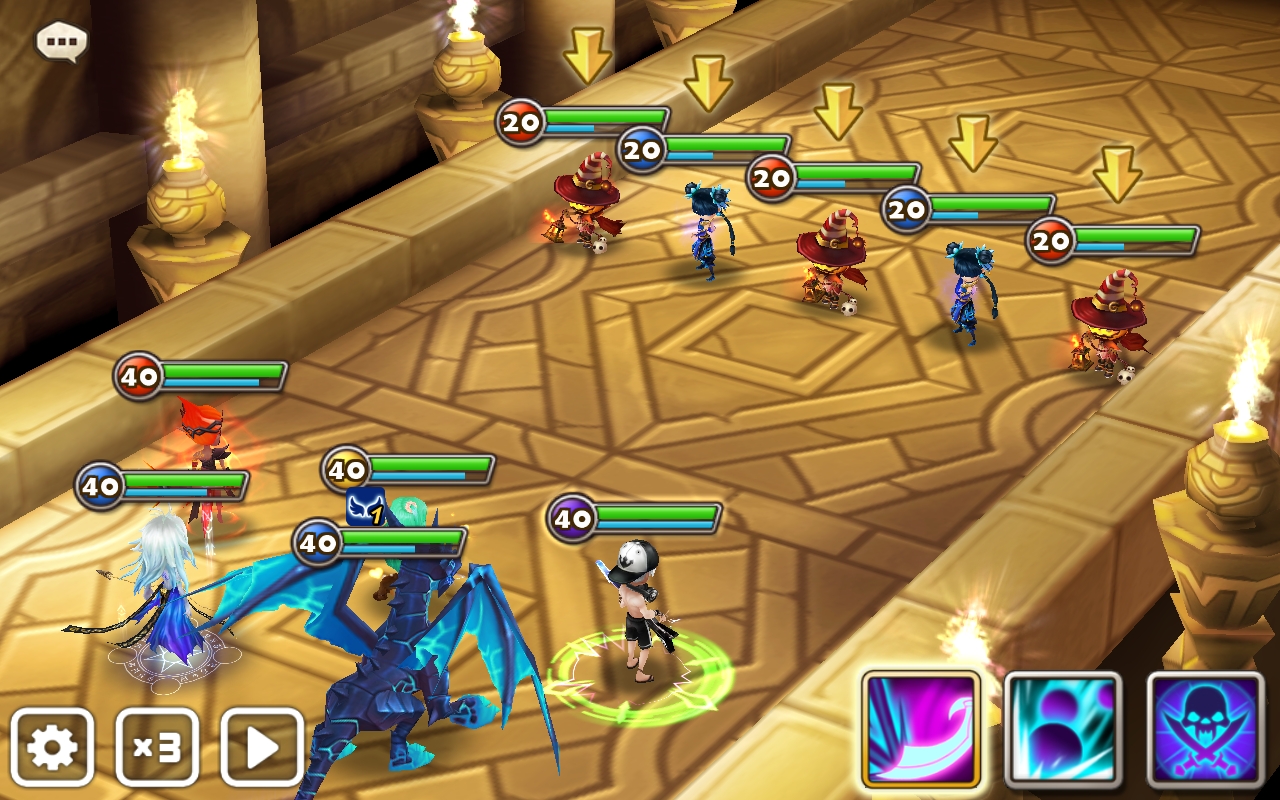 Let’s do this, baby. Here, we have three Smokeys (fire Jack-o-Lanterns) and two Xiao Lins (water Kung Fu Girls). The Threat: Oh, definitely both of them, but if I had to pick one, I’d go for Xiao Lin. Her third skill, Water Dragon Attack, randomly attacks enemies four times. The damage she deals increases by 25% per harmful effect on the enemy she hits. Now, Smokey ends up directly contributing to that damage, too. Smokey’s third skill, Fire Starter, attacks all enemies twice; decreasing their attack power and healblocking them for two turns. His second skill Ghost Appearance also attacks a target four times; granting a random effect that’s either glancing hit, healblock or weakening the attack power for 2 turns. The Solution: Take out Xiao Lin first. I am not kidding when I say that. You can worry about Smokey later, but seriously, just kill Xiao Lin. She’s a great mon to use against enemies, and is terrifying to face off against in HoH. 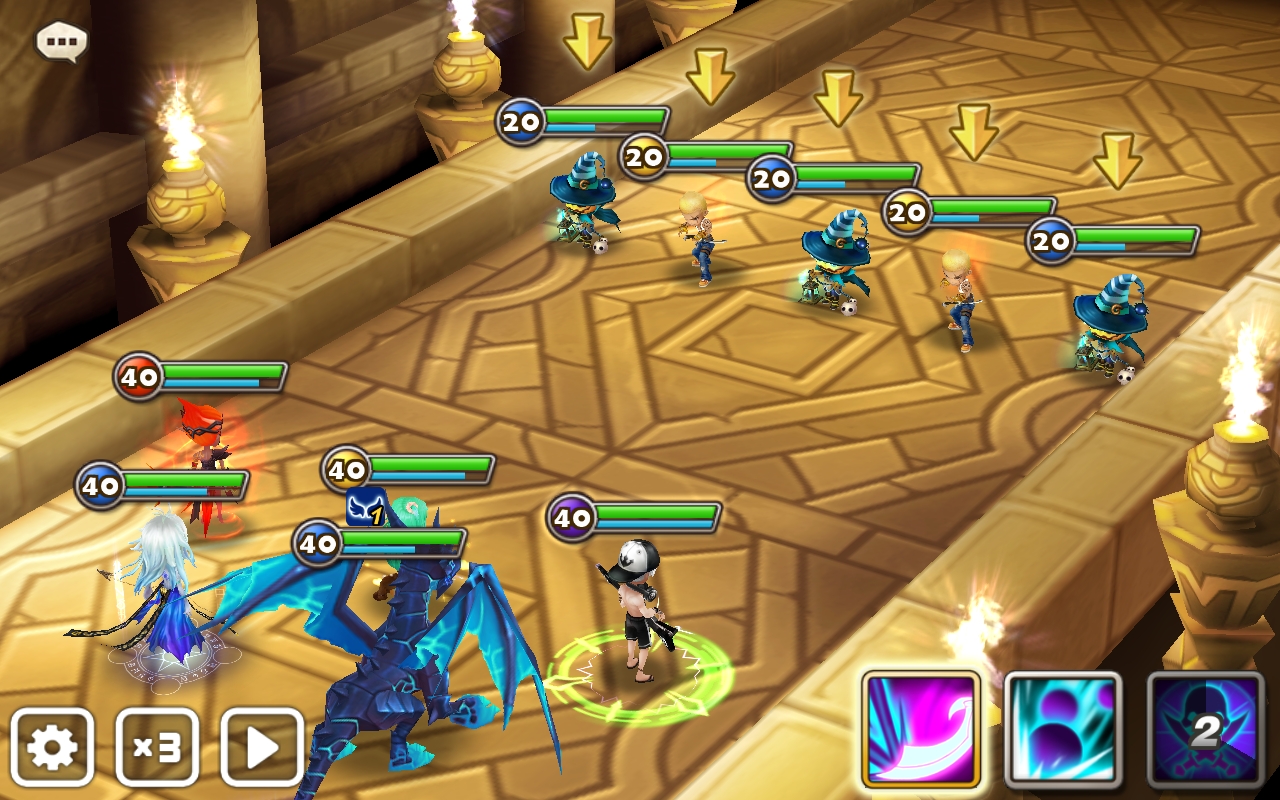 Welcome to stage 2, what can I saaaay except buff Geld-nir. Anyway, here we have three Chillings (water Jack-o-Lanterns) and two Logans (wind Neostone Fighters). The Threat: Chilling is definitely the best of the Jack-o-lanterns, that’s for sure. His passive, The Cunning, will have him steal a beneficial effect with each hit he brings, and applies it onto himself. His attack speed increases for each buff he has on him. He’s been known to be brought into DB10, because he can steal the Immunity off the dragon easily. Logan is…well, he’s a Neostone Fighter. All the Neostone Fighters are “meh” at most. Trevor used to be the best, and now no one uses him anymore. I know I’m rambling, but still. Anyway, his third skill Push Through attacks an enemy two times, increases his attack speed for 3 turns, and also decreases the enemy’s attack bar by 30% per hit. If he completely depletes an attack bar, he’ll instantly gain another turn. Logan actually does quite a bit of damage, surprisingly. The Solution: Take out Logan first. Surprising, I know, but Chilling can be considered a support mon, meaning that his damage is very minimal at the most. It’s Logan you should worry about killing your mons. Once both are dead, you can then focus on just slaughtering Chilling, and then we can move on to Stage 3 – the miniboss! 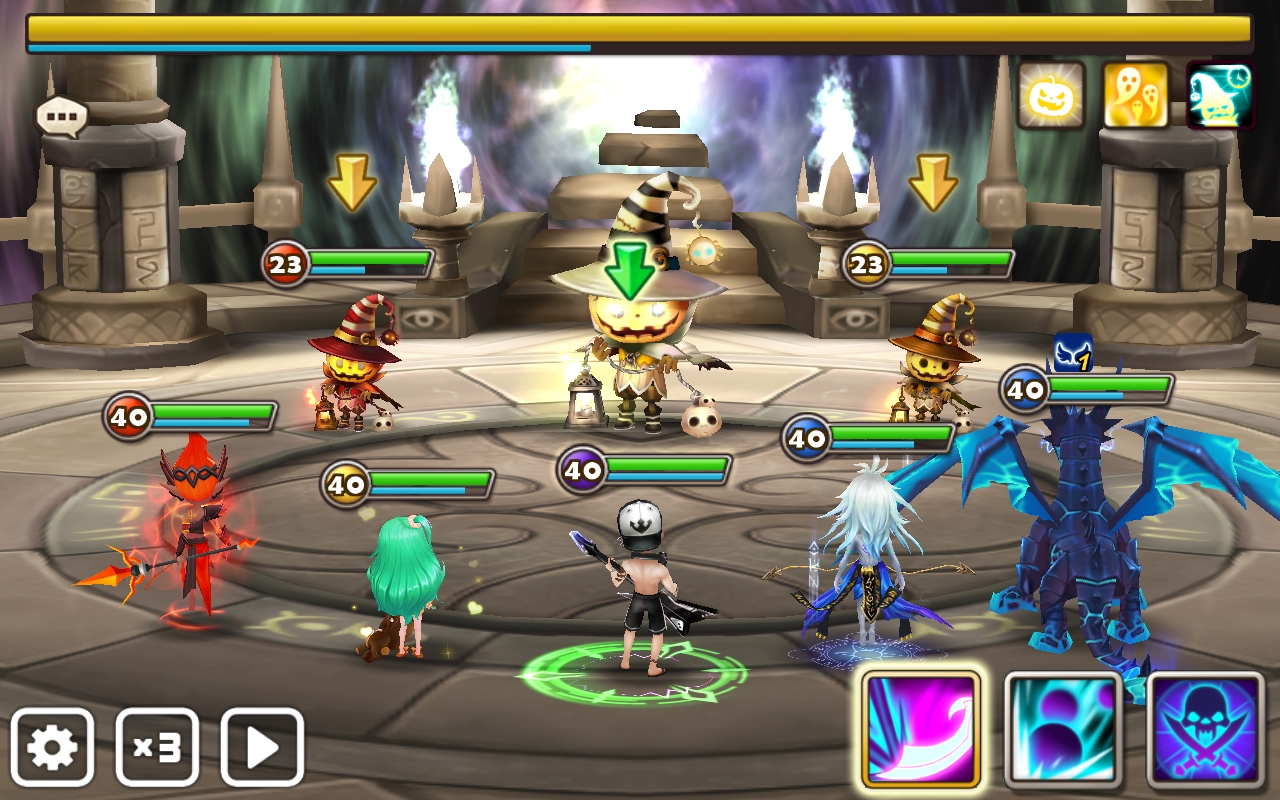 Miniboss time! Here, we have an Isis (light Desert Queen) and two Berings (dark Kobold Bombers). The Threat: Soooo, have I mentioned I’ve always wanted an Isis ever since she came out? Her third skill, Gaze of Oblivion, silences all enemies and puts Oblivion on them for 2 turns. This prevents them from using their second and third skills and are unable to use their passives. She’s actually the only obtainable monster in the game who can plant AoE oblivion, and is one of now three monsters who can even use Oblivion. She may not be that good damage-wise, but is one of the best crowd-controllers I can think of. Bering, meanwhile, is the damage dealers of this stage. He also brings along some admittedly decent Crowd Control, but not nearly as good as Isis. Magic Exterminator, his third skill, attacks all enemies, removing a buff, and silences them for 2 turns. The Solution: I can’t even say that Com2uS recently did this, because I’m pretty sure it’s been two years now, but anyway, you don’t have to kill the lackeys anymore in order to progress in HoH. That means you can just stun Bering, kill Isis and get on with it. Or, if you’re in the higher stages and like to play it safe like me, you can kill the Berings, work on manipulating Isis’s attack bar, and then kill her and move on to the next stage. 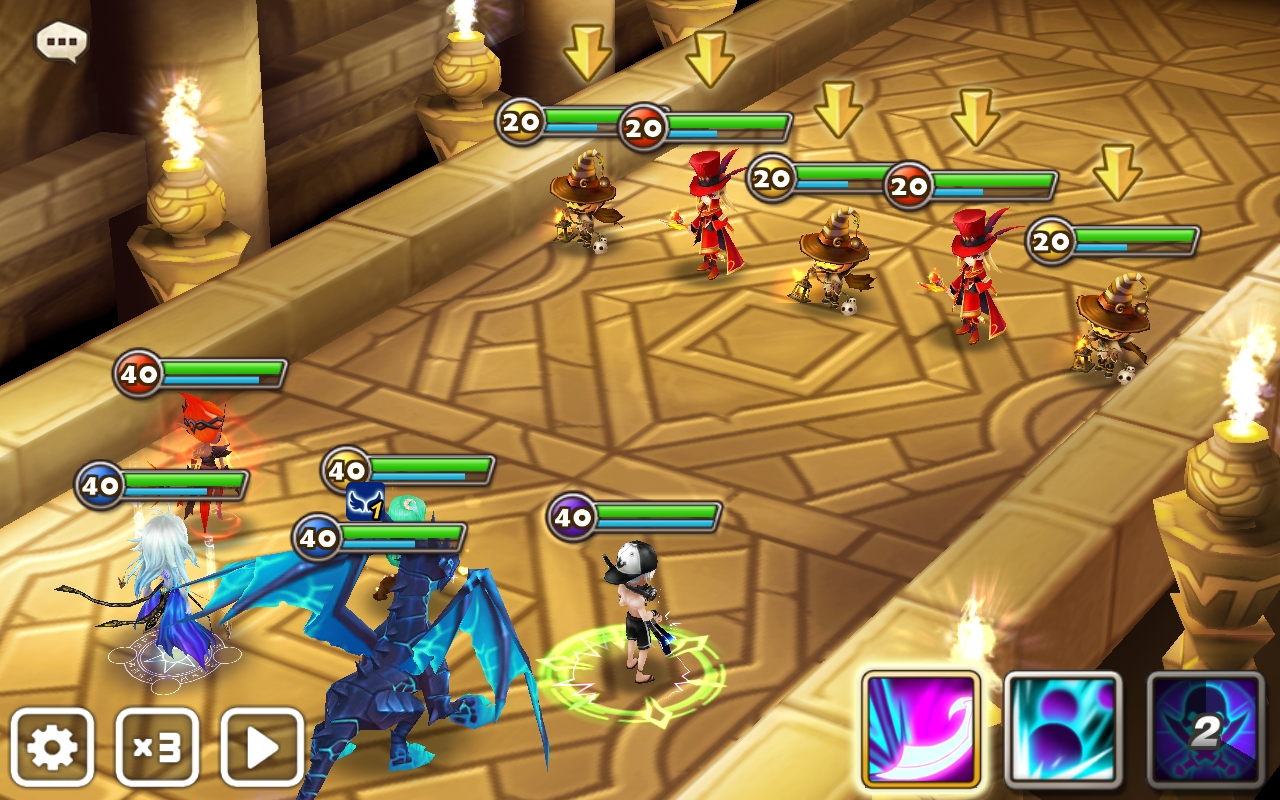 Stage four consists of three Windys (wind Jack-o-Lanterns, duh) and two Jeans (fire Phantom Thieves). The Threat: I find it funny that I completely forgot Windy’s name and had to look it up in the wiki, that’s how mediocre he is. Jean’s probably the bigger threat here damage-wise. And support-wise. Because Windy just sucks really bad. His passive is pretty similar to his dark brother’s. His passive, The Shadow of the Moon, will grant him a shield for 1 turn the first time he’s attacked by an enemy after his turn ends. It’s equivalent to 20% of his Max HP and does not activate with each hit. This gets very annoying in the higher up floors. Jean, meanwhile, got a couple of buffs to make him a lot scarier in PvE environments (but he’s still not good for PvP stuff). His passive, which used to be called Old Grudge and is now Quality of Phantom, increases his attack bar by 50% whenever he stuns or kills an enemy. He’ll also deal 100% more damage if his enemy’s HP is twice his HP or higher. The Solution: Kill Jean. Seriously, this guy has taken out more people in my HoH attempts than anyone else in this one. Not even Xiao Lin has done this much damage to me before. Anyway, Windy is very annoying to deal with. You’ve got two choices: Brand this guy and hit him in one shot with a massive heavy-hitter single target damage dealer (2A Kro or Brandia comes to mind) or you can go the slow way: bring someone who destroys Max HP and go for it. If you go for the Max HP option, I recommend Baleygr, the fire Lightning Emperor. He’s fusable, his third skill hits really hard, and once he hits 5 Knowledge he’ll destroy Max HP, therefore making Windy’s shield more bearable to deal with. 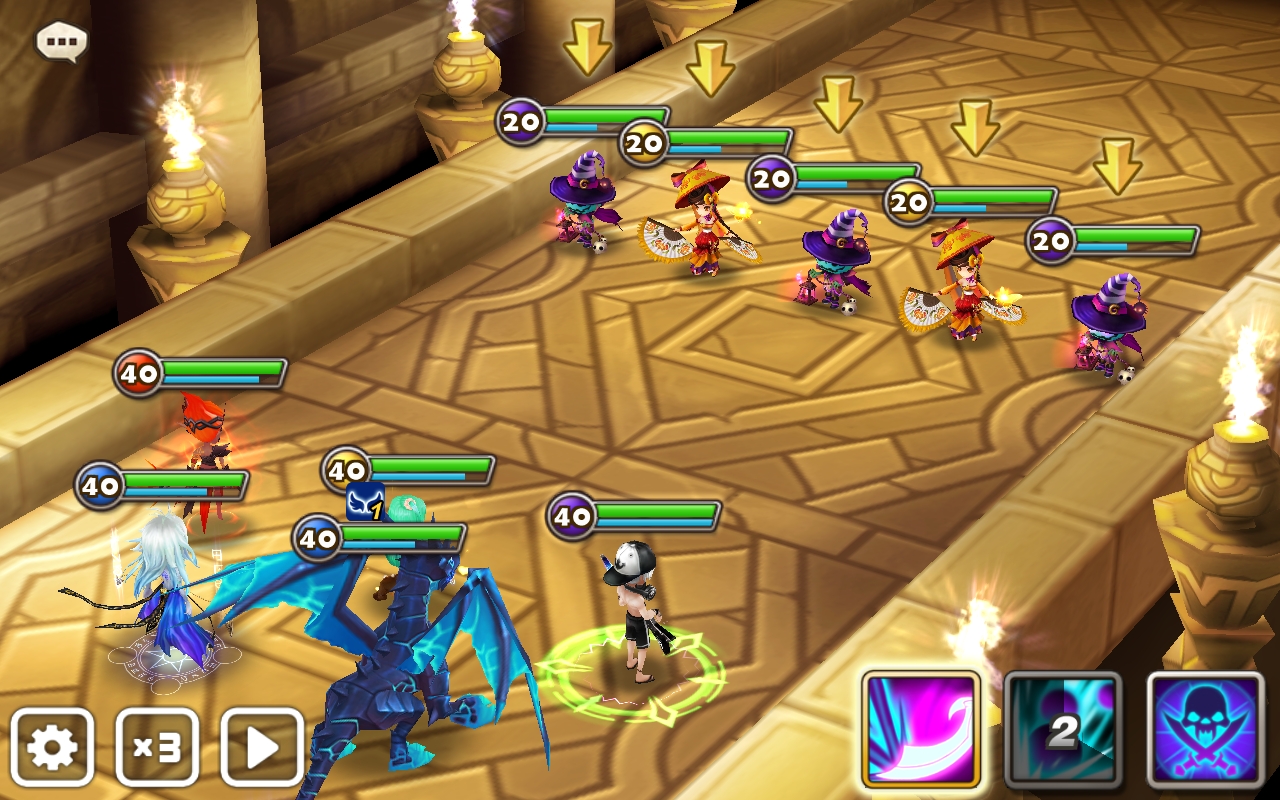 We’re almost at the boss, guys! This round consists of three Duskies (dark Jack-o-Lanterns) and two Chasuns (wind Sky Dancers) The Threat: Well, no one in particular is really a threat. Everyone’s just a support mon – Chasun is known for her healing game, with Amuse healing everyone for 20% of her Max HP and increasing their attack power for 2 turns. Fallen Blossoms, her third skill, balances her HP and an ally’s HP and attack bar so both bars were higher than before. The healing also goes past healblock, too, which is really OP. Nowadays, Chasun’s fallen out of the meta in favor of Yeonhong, but she’s still strong. Dusky, meanwhile, has the passive The Night’s Comfort, which grants him a shield for 3 turns if he doesn’t attack on his turn. His damage, meanwhile, increases by 50% whenever he has a shield on (any shield, mind you; it could come from Woosa or someone) and is proportionate to his level. The Solution: Dusky’s shield granting him 50% more attack power wouldn’t matter if you never let him attack. Yes, if he’s stunned he will get the shield, but does it really matter? The shield is easy to break, and if you keep stunning him, he’ll never get to utilize the “increased attack power from shield” part of his passive. Chasun, meanwhile, is a bit of a tricky case. Yes, you can stun her, but you might be tempted to let her go a few or more turns without stuns, because she can’t do that much damage. Actually, she’s the more dangerous of the group, because she can end up completely undoing a lot of the damage that you’ve been chipping away at this whole time. So, keep her stunned. Like, all the time. 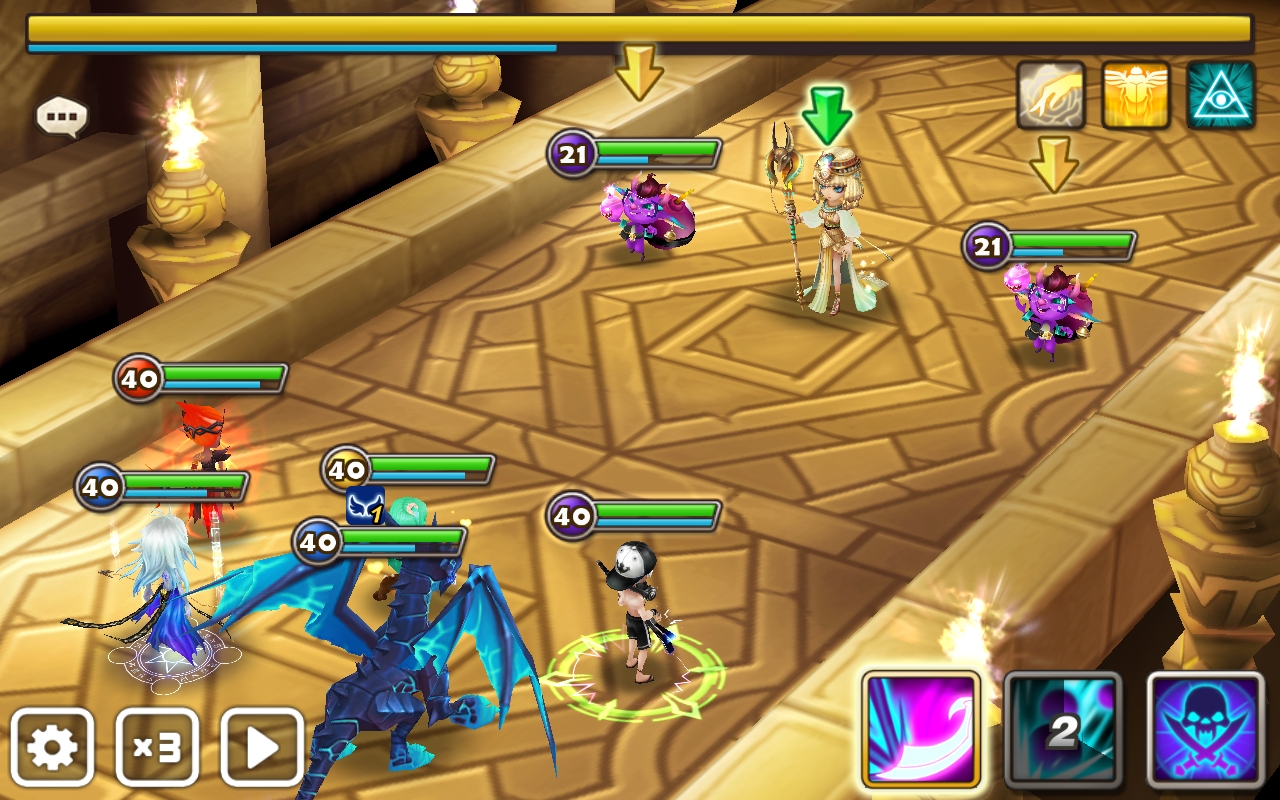 Alright, it’s boss time now! Here, we have the boss, Misty. However, this stage has the most variety of all the stages, because the elements of the lackeys will be different for each stage. In this case, we have a Misty, Smokey, and a Windy. The Threat: There’s no one-size-fits-all advice I could give you for this stage, because the lackeys are going to be different for each stage. The Jack-o-Lanterns are usually centered around crowd control and debuffs, but Smokey’s the exception here. In this case, I would say that Smokey’s the biggest threat. The Solution: Well, because the threat differs, the solution differs. There are two ways to go about this particular stage, though: either just nuke Misty and be done with it, or get rid of Smokey, stun Windy and then kill Misty. If this were a higher up floor, I’d go with the former. I hope you all enjoyed this HoH article! Did you get your Chilling skillups yet? I don’t really use my Chilling, so Misty’s just gonna be six-star food for my new Okeanos. Let me know in the comments down below what you want me to talk about next, but in the meantime, I’m Sara Ann, and I’ll see you in the next article!]]>