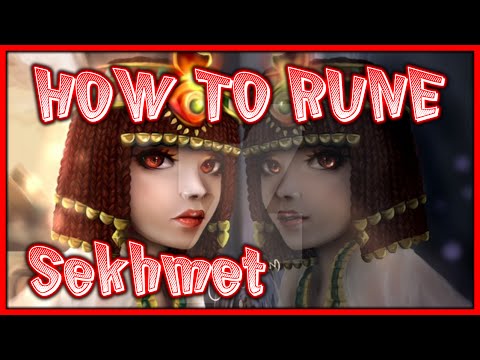 <![CDATA[ <h2>Overview Aside from her Light and Dark sisters, the Summoners War community considers Sekhmet the best of the 3 Desert Queens. Her unique kit makes her a top tier arena defender, and this guide explains why she is so useful, as well providing rune options for early and late game summoners. Note: This is a review by Claytano.

Early Game: 3x Energy or violent. Guard and Focus 2 sets are acceptable. (SPD/HP%/HP%) Late Game: Swift/Will. (SPD/HP%/HP%) – aim for 280+ speed Stat priority: Speed > HP > ACC > Def > RES [easytable] Pros, Cons Fire element is a Lushen deterrent, Low damage output [Charming Voice] Will chose to reset Tianas and Searas on defense because of element advantage, Not top tier outside of arena and guild war defense [Curse of the beautiful] Applies up to 3 debuffs including armor break to all enemies. Can sub for Galleon and set up Teshar for mega-damage., HP leader is great for bruiser comps, [/easytable] Early Game The good thing about summoning Sekhmet early game is that she is relatively tanky, has a HP leader skill that is useful anywhere, and she has an entire arsenal of debuffs. Armor break, the most important debuff, is AOE from Sekhmet’s second ability, so she can fill a vital role for summoners who have not pulled a Galleon or Luer yet. But armor break is just the beginning of Sekhmet’s kit! She also has unrecoverable, glancing, and single target armor break. These debuffs, along with her powerful buff steal.ability reset on her third make Sekhmet an excellent support monster for any summoner. PVP Sekhmet shines in late game PVP as a top tier defender for arena and guild war defense. However, she has to be built correctly to do so. If Sekhmet outspeeds the attacking team, she can reset Tiana with her third ability, protecting anyone else on the team that has will runes. Sekhmet will also target Tianas on bomb teams, taking ability the attacker’s ability to AOE bomb detonate. Tritons, Aquillas, and Lushens are also targets that will be crippled by Sekhmet’s reset. PVE Sekhmet can be used in TOA as a debuffer and skill resetter, but other than that, she is not useful due to her low damage output. Team Combos Arena Defense – Sekhmet(L), Praha, Zaiross, Tank (Ritesh, Chandra, Molly, etc) Guild War Defense – Sekhmet(L), Perna, Orion Alternatives: Fire Sea Emperor for his buff removal and skill cooldown.