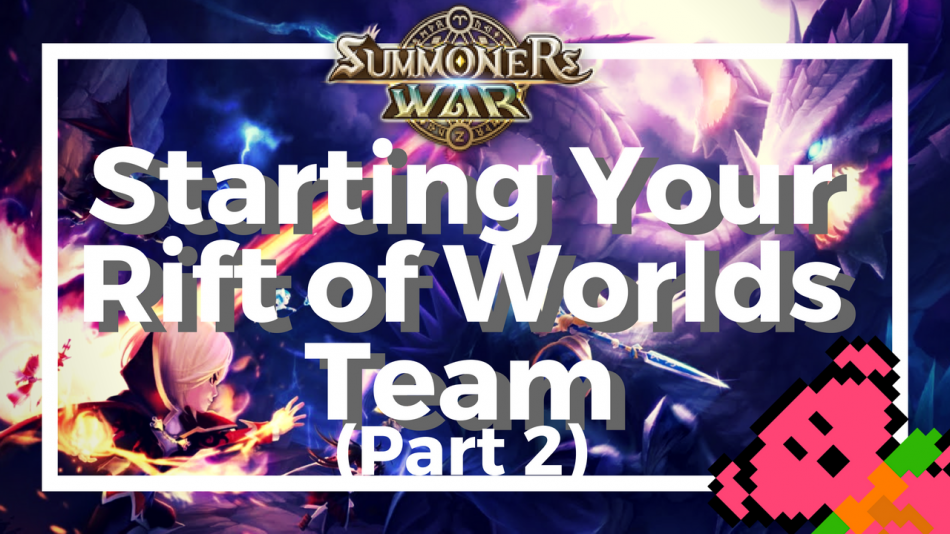 <![CDATA[We’re back again with Part 2 of starting a Rift of Worlds Team! If you haven’t seen the previous part yet, then click<a href="https://summonerswarskyarena.info/starting-your-rift-of-worlds-team-part-1/"> here for Part 1. If you’re a returning reader, than welcome back! This is what your Rift of Worlds team looks like right now: 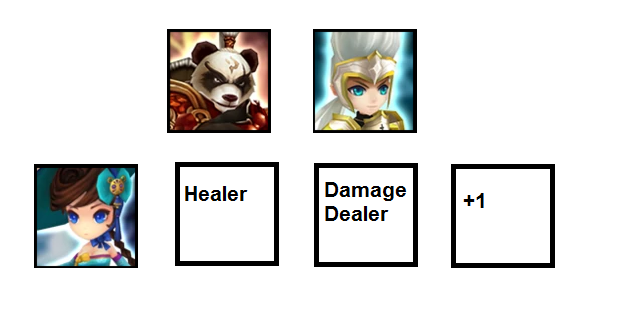 Colleen – Colleen is absolutely the best choice for your Raids team healer. Her kit just works so well with Raids, and in NB10. Her third skill brings Attack break (which is essential if you want to survive the boss), her second skill will bring Heal block – which is also essential because during a certain skill of the boss’s, he’ll remove all beneficial effects of all allies, and heal himself based on the number of beneficial effects removed. However, he can’t heal himself if there’s healblock put on him. But wait, there’s more! Her third skill, Fiery Dance, will heal everyone by 25% of their Max HP and increase their attack power for 3 turns. The second best part is that when Fiery Dance is fully skilled up, it’s a mere three turns. The best part, however, is that Colleen is a two-star monster! She’s freaking awesome, and I fully recommend taking her to R5.

Chasun – So Chasun is really, really OP; not just in Raids. She’s the wind Sky Dancer, meaning if you take her in your team (if you’ve been following my guide up until this point), you’ll have two Dancers. Her third skill Fallen Blossoms will balance both her HP and the HP of a chosen ally monster to something higher than it was before. The best part is that it goes through Heal Block too; this means that if the enemy Theomars is at 1 HP and Chasun at 100% HP, she’ll use Fallen Blossoms on Theomars to balance his HP back to 100%. She also has the second skill Amuse, which heals everyone by 20% of her Max HP and increases their attack power for 2 turns. Though it’s not as good as Colleen’s third skill, it’s still really good (For a second skill, nevertheless)! If you have a Chasun, she could be a possible Colleen replacement.

Nicki – I have like no idea why I’m even mentioning Nicki, the dark Occult Girl. She’s a dark natural 5 star, so there’s maybe a one in a ten thousand chance that you, the reader, have a Nicki. Nevertheless, I’m going to mention her because she’s really decent for Raids. She shares the second skill of Anavel (Girl’s Prayer), which is an AoE cleanse and heal. The reason why she’s an “attack power granter/healer” monster is because of her third skill, Dark Guardian Angel. She’ll increase everyone’s attack power for 3 turns and then attack all enemies (in this case, one enemy) five times, each attack bringing a 3-turn healblock. Did you know that Nicki is the only one of the Occult Girls whose guardian angel hits five times? Everyone else hits only thrice. Nicki is great and I’d use her if you had her. But alas, you probably don’t, so let’s take Colleen into our example team! This is what your team looks like now: 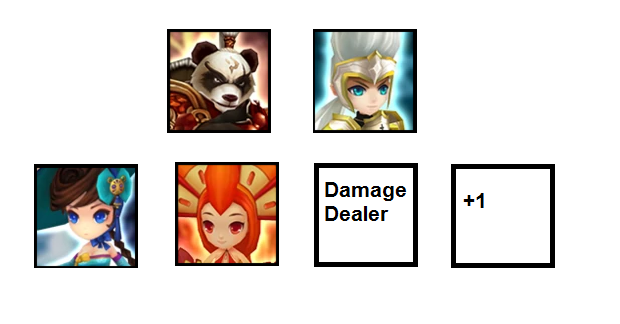 Tesarion – Tesarion the fire Ifrit isn’t really that good of a monster for Raids. His passive increases his damage by 30% if there are harmful effects on the enemy, and inflicts Oblivion on the enemies he attacks. The damage increasing is really nice, but the other part (the part about inflicting Oblivion) has no effect on the boss whatsoever. Tesarion’s first skill provides nothing debuff wise, but his second skill does have defense break, which is always nice. His leader skill is really nice, too: a surprising 41% Resistance. Tesarion can hit really hard with the right rune stats, though his passive doesn’t increase per harmful effect on the enemy; it’s just a flat 30%. You wanna know whose third skill increases drastically for every harmful effect on the enemy?

Xiao Lin – That’s right! Three of the five Kung Fu Girls are some of the best attackers for Raids. They all provide some nice debuffs, and their third skills, “[Element] Dragon Attack” hits really hard. Xiao Lin is everyone’s favorite Raids attacker for her third skill, Water Dragon Attack, where she’ll attack the dragon four times, and the damage will increase by 25% for every harmful effect on him. She can hit some really nice numbers if there are multiple debuffs on him, including Defense Break and Brand. That’s why people recommend runing Xiao Lin on Vampire, so that if she’s damaged, she can instantly heal herself by using Water Dragon Attack. Let’s not even talk about the fact that when the Dragon Attack is on cooldown, the Kung Fu Girls have a 25% chance to counterattack whenever they’ve been attacked!

Liu Mei – Liu Mei was last month’s Hall of Heroes! I snagged myself a copy of her, and I’m gonna work on building her next month. Right now, I’m busy trying to six-star my Khmun, but I digress. Let’s get back to Liu Mei herself! Liu Mei’s third skill, Light Dragon Attack, of course attacks the dragon four times, but each attack will absorb 25% of the dragon’s attack bar. This makes her into great Crowd Control, and if she steals all of his attack bar, she’ll be able to proc into another attack! On a scale of 1-5, one being the best (Xiao Lin) and five the worst (Ling Ling), I’d rank Liu Mei as number 3. Who’s number 2, you may ask yourself? Well…

Hwa – Honestly, I’m not too sure why Hwa the fire Rakshasa is so recommended for Raids. Like, I can get why they recommend her for GB10 despite her elemental disadvantage, but I can’t understand why people say she’s good in raids and in NB10. Her passive, Burning Whip, will have her decrease the attack bars of monsters she attacks by 25%, and she’ll strike again with a 20% chance; meaning she has a chance to decrease enemy attack bars by 50% and attack twice. Both her skills scale off of speed, so if you rune her fast, I can sort of see why people like her in Raids so much – Crowd Control and some nice damage. She also comes with a leader skill of 19% Crit Rate, so that means if you put Hwa in your team, you have a Crit Rate and a Defense leader if someone doesn’t have either of the two. Because my diagram is supposed to be an “obtainable” guide, I’d put Tesarion in solely because this is R4 we’re talking about, and once you hit R5, you’ll probably have some non-farmable options. This means you can swap out Tesarion for Xiao Lin or Hwa when the time comes. 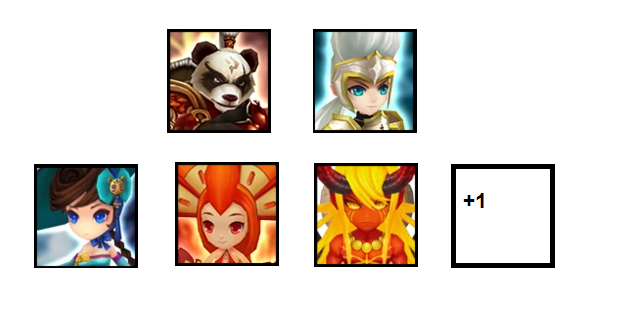 So what is the +1? It’s a free spot in your team where you can slot in another monster that fits one of the three backline roles: cleanser, healer, or damage dealer. Generally speaking, it’s always nice to have two cleansers or two damage dealers, but I wouldn’t recommend two healers. Their heals would overlap and one of the two healers would be redundant. Personally, I would go damage dealers for your +1 team. In that case, refer to “Damage Dealers” for a good choice of monsters you can use. You’ll have to eliminate Tesarion, though; you can’t take two monsters of the same kind into Raids. If you want my opinion, I’d take Liu Mei as your second, mostly obtainable damage dealer! She’s not as good as the water sister, Xiao Lin, but she’s good on her own! This is what your finished team should look like: 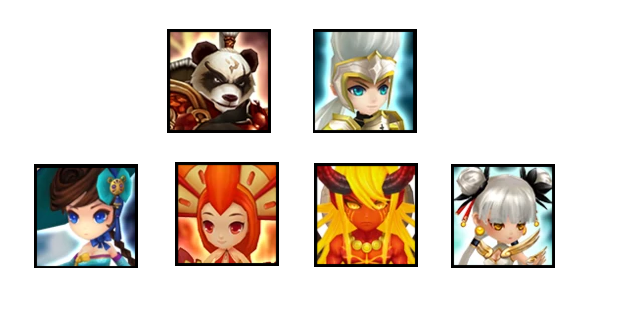