<![CDATA[When you first start at summoners war, there’s a tutorial guiding you on your first steps. But it not necessarily teaches you all you need to know to start progressing efficiently. One of the first aspects that leave a lot of doubts is: which monsters should I level ? Will he help me later on the game? Who should I 5*/6*? This article will give you some insight on this matter, so you can start the game on the right foot. I also will talk briefly about early game runes. Be aware that, as you progress in the game, and have a larger pool of rune sets, you will probably change it for more advanced runes. Just in case, I'll say both. The monsters shown in this guide are easy to get on scenarios or unknown scrolls, so they make the perfect for those who are starting and want cheap, powerful reliable monsters until they can get his hands on the rare 4*/5* powerful monsters you see on your videos. <span style="font-size: large;">Abbreviations and slangs used on this article: 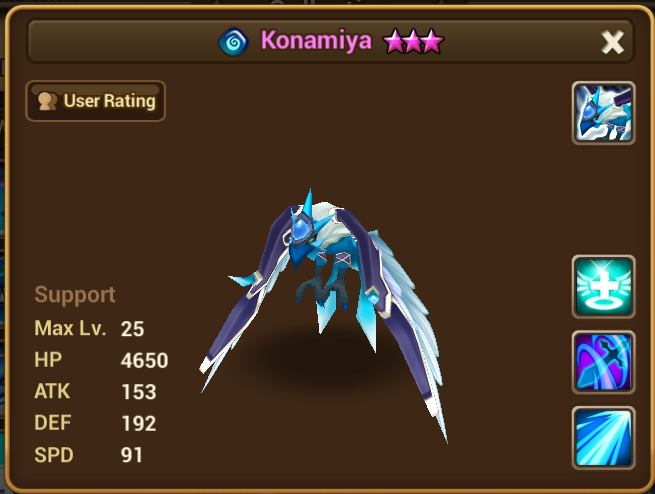 Konamiya is a 2 star healer who excels at keeping her teammates alive because her heal skill (Peace) remove ALL the debuffs from your team before it heals, so the unrecoverable effect (debuff that prevents healing) is dissipated before the heal,thus healing even the unrecoverable. Since konamiya is a suport, her job is to heal, cleansing your team as fast as possible. Ideally, you should use violent, but since we’ are talking about early game, put swift for the bonus speed and energy for the hp bonus. Runes early game: Swift + Energy with as much hp on main status and speed on the substats as you can. Runes late game: Violent + Endure/revenge, with SPD / HP%-DEF% / HP%-DEF% 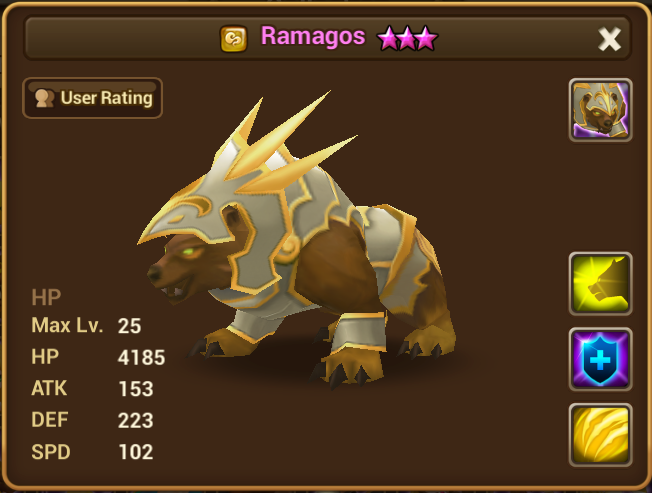 Ramagos is a beast. Your first tank, and one of the bests. His 3rd skill (Clean Shot) inflicts damage based on his missing hp, which is convenient for a tank. If you kill the target with it, you gain an extra turn. That’s the beauty of this beast: His second skill (Crouch) heals him and buff his defense. It’s a combo feared even among advanced players. Being a tank, all Ramagos need is tankiness to do his job. Go for triple energy and you’ll be fine. Runes early game: 3x Energy with as much hp on main status and defense on the substats. Runes late game: Vampire + Endure, with HP%-DEF% / HP%-DEF% / HP%-DEF% 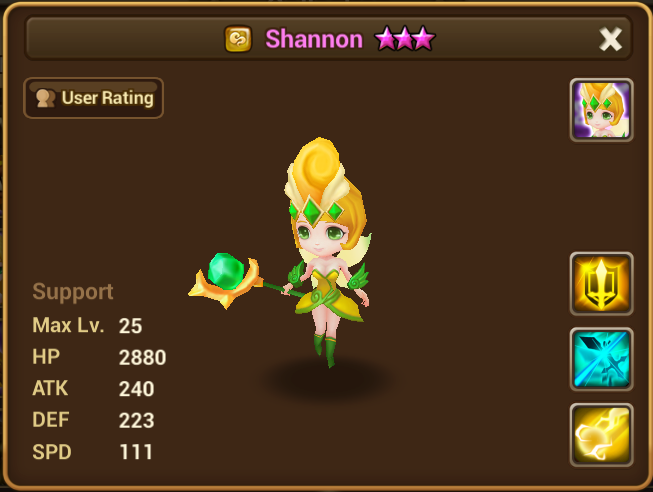 You already have a tank and a healer. That’s where Shannon comes in. Between buffs for allies(Pep Talk) and debuffs for the enemies(Decelerate), she will be an essential part of your team and will be for a long, long time. Shannon has low base stat and has a team debuff, which needs accuracy to land consistently. Energy + focus will be your first sets. Runes early game : Energy + Focus with as much hp on main status and accuracy on the substats to make her reliable. 45% is your goal on Shannon. More than that is waste (and you i’ll have a hard time making her 45%, believe me.) Runes late game: Despair + Focus, with HP% – DEF% / HP%-DEF% / HP%-DEF% 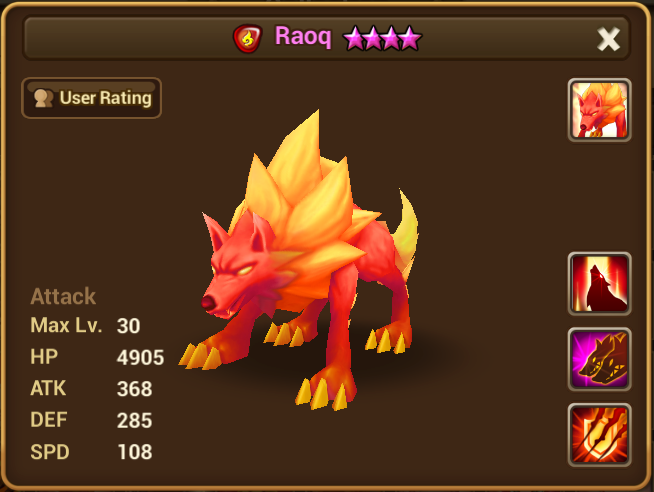 Until now, I suppose you are using your fire hellhound to deal damage. It’s not bad. But Raoq is another level. He has a chance to attack again using his 1st skill(Scratch) and his passive(Annihilate) gives him an extra turn every time he kills an opponent, making him a fast, strong and random kill machine. To maximize his killing potential, go for fatal + blade. Runes early game : Fatal + Blade, focusing on attack. Runes late game: Violent + Revenge, with Atk% / Atk% – CritChance% / Atk% , with subs for Crit chance and CritDmg. 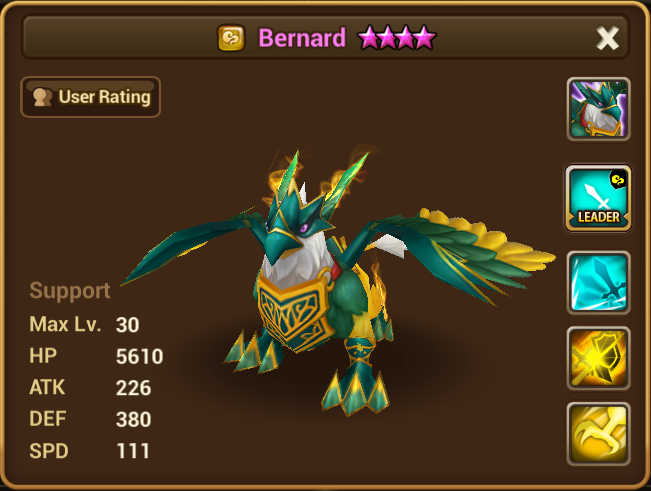 Bernard is one of the most underrated monsters for beginners. But he gives something that’s essential for a good team. SPEED. I can’t stress enough how your team needs speed. And bernard will supply you all the speed you need to kill everything in front of you before they can say “OUCH”. An you gain a defense and attack breaker, which will make you last longer and hit harder. How not to love ? He’s all about speed. That’s your only concern on him. Runes early game : Swift + Focus with as much speed as possible. Runes late game: Swift + anything you want(even broken), with SPD on second and as much speed you can get. You should understand that these monsters are what we call “game changers.” They make a huge impact on your progression, and change your view of the game itself, improving your gameplay. In the end, they are the first steps to a huge, huge game that keeps growing and evolving. I hope this article helped, and may your summons always be Nat5! Note: This is written by Eremylto Silva.]]>