<![CDATA[<em>This is a guest post by: cpadeo We all chase Natural 5 Stars. They have powerful abilities, incredibly synergistic skill sets, or unusual properties that make them powerful additions to any box. However, there are certain Natural 4 Stars that are arguably as strong or useful as their rarer brethren. These “Elite” Natural 4 Stars are highly sought after for the following reasons:

We’ll be taking an in-depth look at how you can best exploit these awesome 4 Stars, where to use them to their full potential, and how to fight them should you see them in PvP – Arena, Guild Wars, or Real Time Arena. Opening up the series is Chasun, the Wind Sky Dancer.

The Queen of Healing 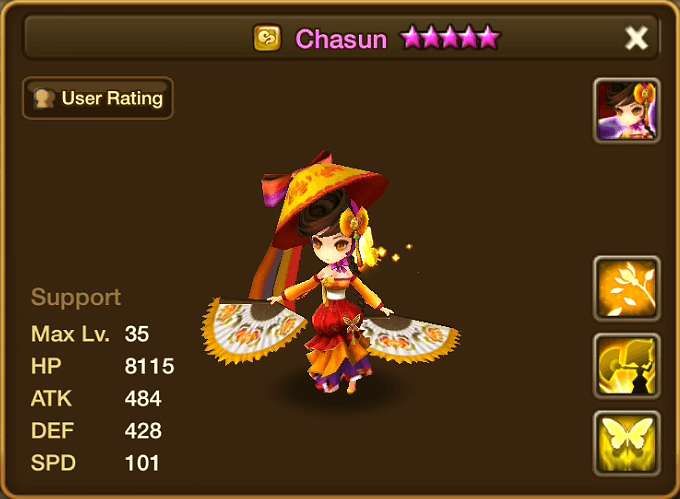 While other healers in the game may bring more utility to a party than Chasun, she is often cited as the most powerful pure healer in the game that isn’t a Natural 5 Star. With two different and unique heals, Chasun massively increases the survivability of any team in the game, making her a very powerful, if single-minded, pick. For a default skill, Graceful Touch is decent. A simple single target attack that has a 50% chance to apply the “Glancing” debuff for two turns, it is best used against enemy damage dealers to limit their damage output. Amuse is the first of Chasun’s two heals. It is an AoE heal that simultaneously applies the “Increase ATK” buff to the entire team for two turns, and scales off of Chasun’s maximum HP. Fallen Blossoms is Chasun’s second heal and signature ability. It is a single-target skill that compares the selected monster’s HP and ATB to Chasun’s, and does two different things. First, it takes the lower HP value between the two monsters, and matches it to the higher one. Second, it matches Chasun’s ATB to the target monster’s.

While Chasun does bring some utility in the form of her “Glancing” debuff and “Increase ATK” buff, the real reason you bring her to a fight is to increase your team’s survivability. Amuse is Chasun’s party-healing skill and should be used as such. Unless you are guaranteed to win or take out a threat on the turn after you cast it, I would avoid using Amuse solely for the “Increase ATK” buff. Even at max level, it has three-turn cooldown, meaning you can be caught without a heal if your party takes massive damage at the wrong time. Fallen Blossoms is a much more complicated skill because it is much more than a simple heal; it has the potential to generate turn advantage for Chasun, bring back a near-death member to full health, or heal herself, depending on who you cast it on. Its description says Fallen Blossoms “balances the HP and the Attack Bar of the target ally and your HP to a higher amount than before” – simply put, it matches the lower HP value of either monster to the higher one, and matches Chasun’s ATB to the target’s ATB. In this situation, it is Chasun’s turn. If Fallen Blossoms is cast on Veromos, Chasun will gain full ATB, 100% HP, and will move again after Veromos’ turn. Because Veromos’ HP% is higher than Chasun’s, she was matched to his health amount. Since Chasun’s ATB will always be 0 after using Fallen Blossoms, she will always match the ATB of the target. Picking a target with a full ATB essentially guarantees she will move immediately after the target. 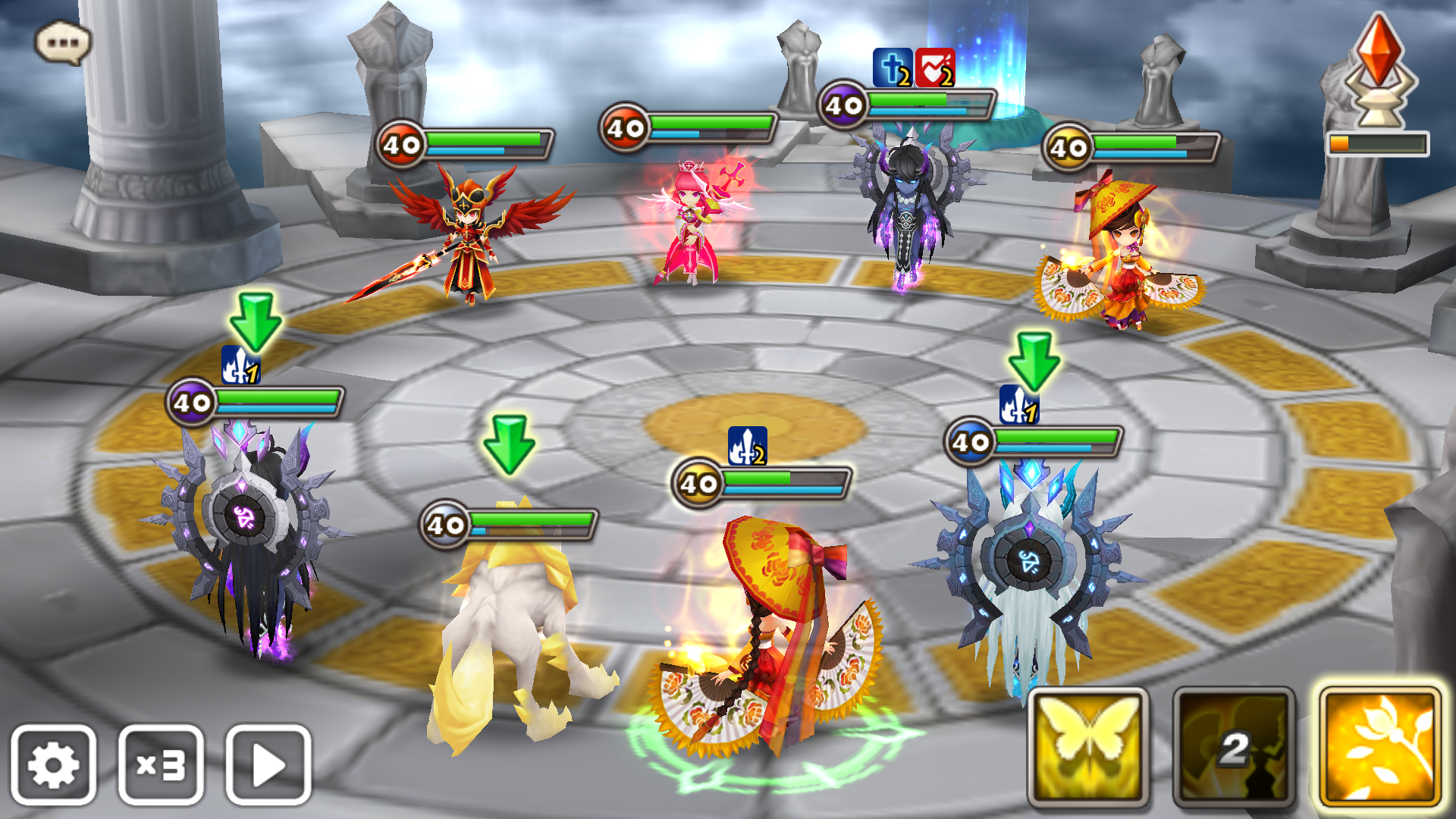 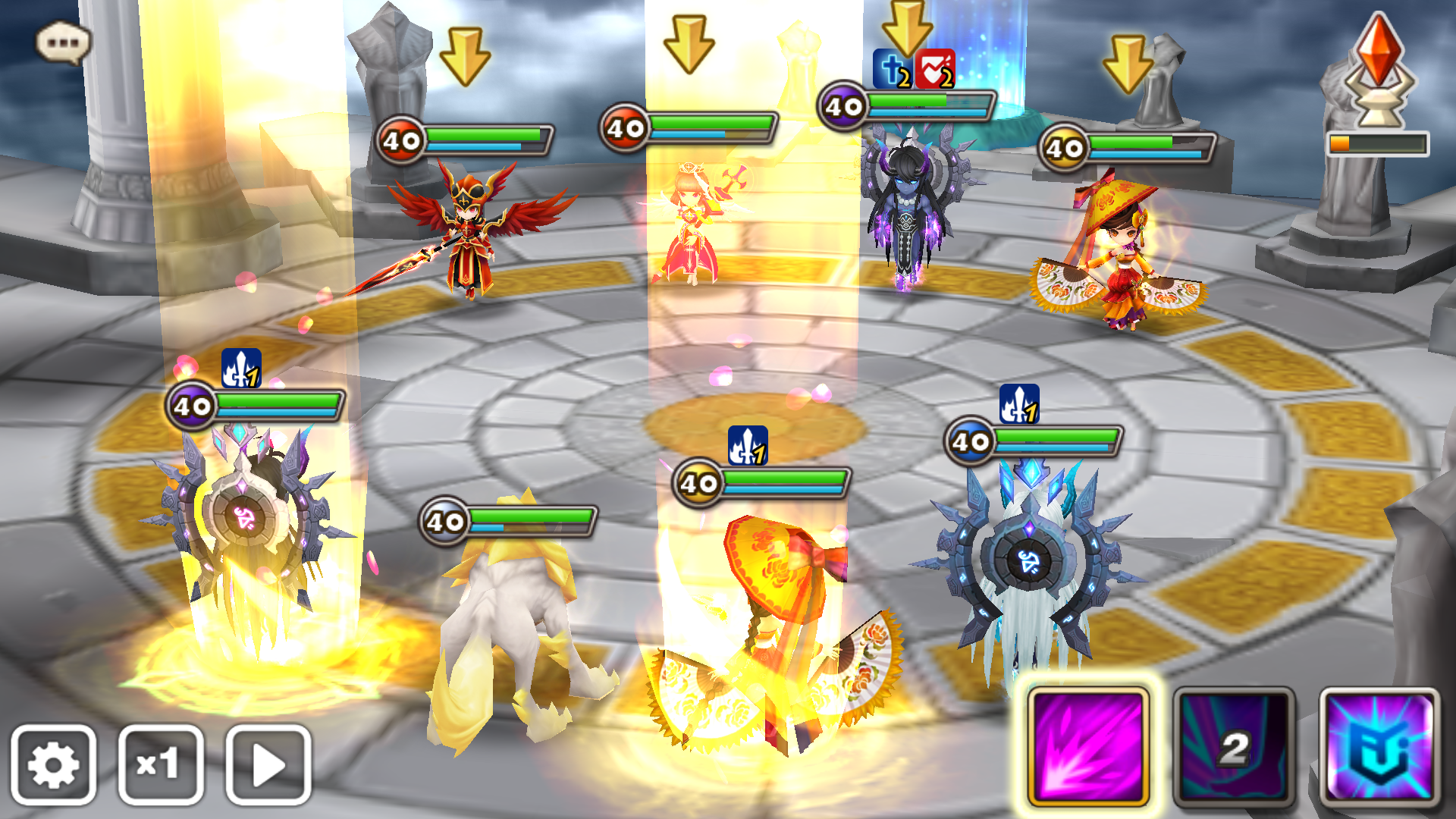 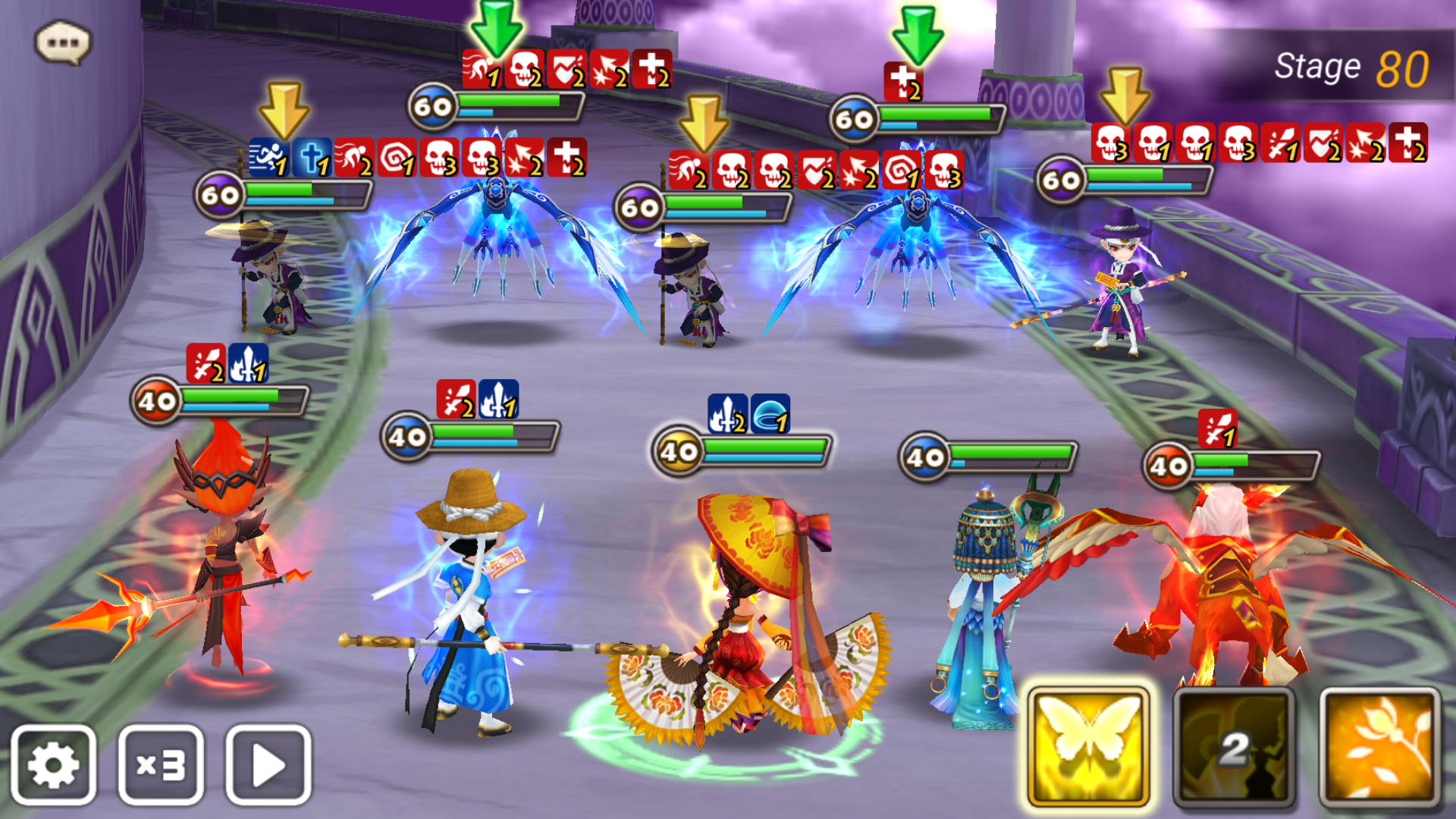 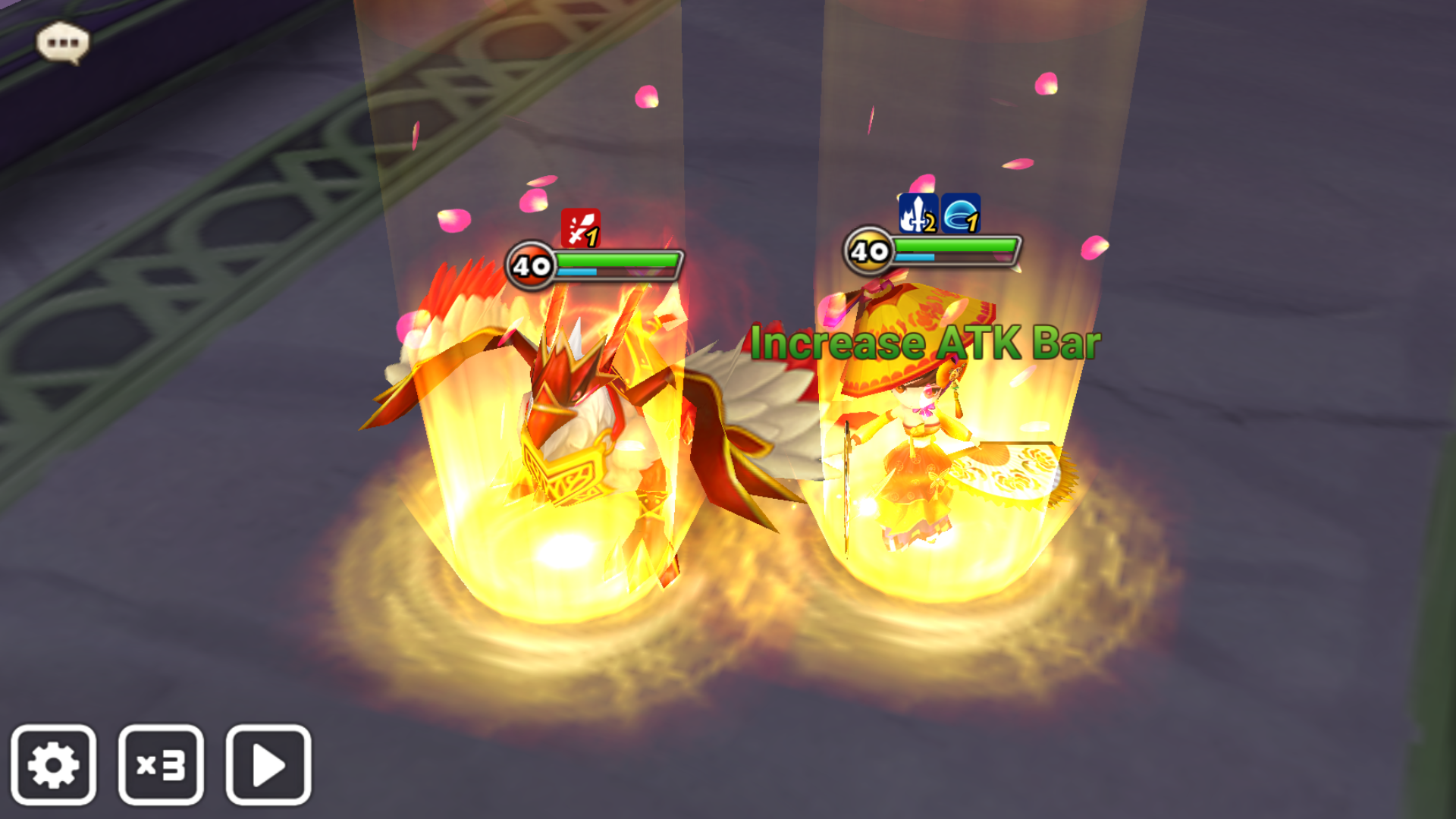 Selective use of Fallen Blossoms is important to get the most out of it, so be aware of what it can do. Need to bring someone back from near death? Select them as the target if Chasun’s HP is higher. Need Chasun to heal herself? Select a teammate whose HP is higher than hers. Need to get in an extra turn so Amuse can come off cool down? Select a teammate with a full ATB. As if the versatility of the skill wasn’t enough, Fallen Blossoms’ heal is not prevented by the “Unrecoverable” debuff. This is an incredible mechanic of the skill that should not be overlooked. It also makes fighting her annoying, as traditional methods of countering healers are not completely effective against her.

Chasun is a strong pick in nearly all aspects of the game. She can pick up healing duties by herself in Scenario, Arena, or Guild Wars, does well in Giants and Dragons teams, and increases survivability in Raids. On Defenses, she is commonly paired with threats such as Camilla or Theomars, ensuring that killing them is a difficult task and making even lighter hitting monsters more threatening.

Her skillset means that she is a very common sight in Arena and Guild War Defenses alike. The first thing to understand when fighting her is that she can, and probably will, bring a near-dead foe back to full health, and that is ok. The second thing to understand about a team using Chasun, is that she is not your primary target; the threats on that team are. While Fallen Blossoms and Amuse are powerful, they are also on long four- and three-turn cooldowns respectively, giving you time to beat down her damage dealers. If you find yourself unable to kill a threat on her team in one turn, baiting out Fallen Blossoms by focusing the target down, then switching to Chasun, is one of the most effective strategies you can use. It forces Chasun’s AI to prioritize Fallen Blossoms over Amuse, and reduces the amount Fallen Blossoms will heal her target. It is important to focus on and kill the damage dealers as soon as possible on a Chasun team, because Amuse will increase their Attack Power, making them much more threatening. As a “dumb” healer, Chasun will cast Amuse at every opportunity, even when her team is at full HP. While this potentially wastes the heal it provides, it also means that her team becomes far more threatening. It is crucial to focus damage on single targets at a time, instead of spreading out your damage. Be aware that many Chasuns will also have a high Resistance stat. This makes targeting her with any kind of crowd control a gamble. Instead, focus on bringing abilities that will increase your offensive capabilities against the rest of her team. “Decrease DEF” debuffs allow you to kill the threats on her team faster, and strippers such as Megan or Belladeon will allow you to remove problem buffs. “Unrecoverable” debuffs, while ineffective against Fallen Blossoms, will limit Amuse’s usefulness.

Unlike “traditional” supports who emphasize Speed, HP, and Accuracy, Chasun benefits the most from an emphasis on HP, Resistance, and Speed. Increasing her overall HP will not only increase the effectiveness of Amuse, but also ensures she is difficult to remove from a fight. A high Resistance stat will make her less vulnerable to enemy debuffs and crowd control, and more Speed will help you cycle through cooldowns. There is some debate on whether Slot 2 should be dedicated to Speed or HP. Speed has obvious benefits, ensuring Chasun takes turns more often while compensating for the innate unreliability of Violent. On the other hand, HP will increases Chasun’s own tankiness, making her less susceptible to being removed in one turn against “Wombo” teams or heavy-hitters like Pungbaek or Laika. What you choose will likely be determined by whatever substats you have more of, and personal preference. Her biggest weakness however is her reliance on teammates and her long cooldowns, even when fully skilled up. Starting out, a full Energy or Swift/Energy build will suffice, but you will want to move her to a Violent set as soon as you are able. Violent’s ability to cycle through turns is invaluable. When you have access to better rune sets, the off set you use on her will change depending on what you want to use her for. Shield runes grant even more survivability for her team, while Nemesis runes will turn Chasun into a trap healer (used to combat Lushen and speed clear teams). Basic: 3x Energy, Swift + Energy, SPD/HP | HP | HP Advanced: Violent + Shield/Nemesis/x, SPD/HP | HP | HP

Many of the Elite 4 Star monsters are the “best” at what they do, though some can be replaced on a limited basis. While no one can heal quite like Chasun, there are other healers who are strong in their own right. 4 Star: Emma (Water Neostone Agent) 3 Star: Belladeon (Light Inugami), Ahman (Light Bearman), Basalt (Dark Mammoth) 2 Star: Colleen (Fire Harpu), Lulu (Water Howl) If you have a monster or topic you’d like to see me cover, or just have a question about the game, feel free find me on Global 109 or tweet at me @crispymelee on Twitter!]]>