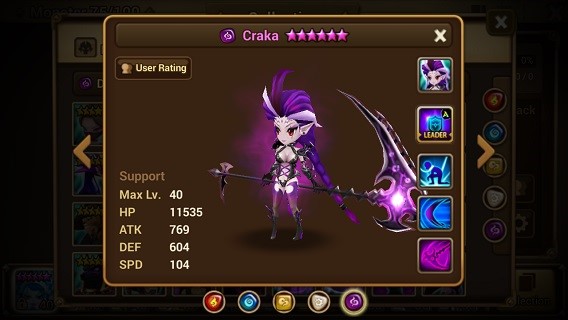 <![CDATA[Revivers can be absolutely crucial to any team relying on a glass cannon to obliterate the opponent. Summoners War actually provides us with a lot more “rezzers” than many players may realize, however, there is often a trade-off to resurrecting a fallen ally. These top 10 revivers in Summoners War were chosen based on the ultimate survivability of rezzed allies, and the least consequences incurred when one or more allies are brought back from the dead. <h3>#10: Conrad (Light Death Knight) 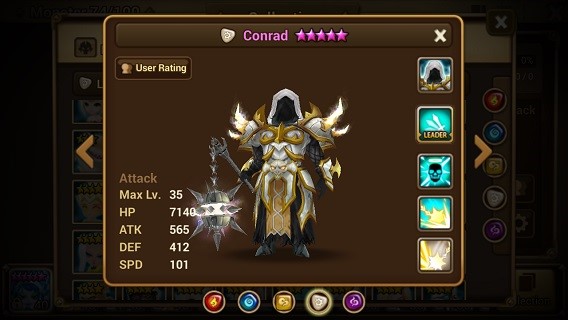 Like his nat 4 death knight brethren, Conrad’s first skill carries the potential to disturb the target’s HP recovery for 2 turns with his first skill. In addition, like Briand and Arnold, the light death knight can also deliver AoE attack reduction for 2 turns. When Conrad attacks – and kills – the target with with his 3rd skill, Trade, a dead ally will be revived with 30% HP. If there is no ally to resurrect, all allies will instead receive a 2 turn shield that will absorb damage relative to Conrad’s current level. Despite being the least favorite (arguably) of all the death knights, Conrad’s ability to bring back a fallen member of your team with 30% of their HP earns him a spot as one of the top rezzers in Summoners War. 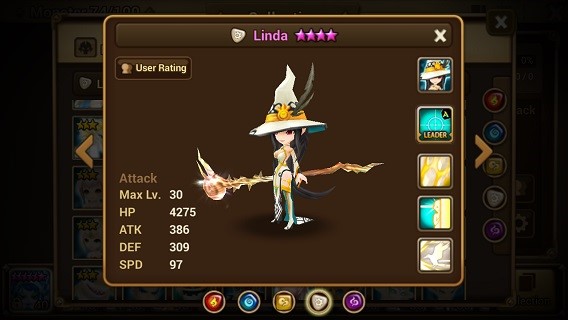 This natural 3* attack unit brings several supportive features to a team. Like her fire and wind sisters, the light mystic witch can inflict single target continuous damage with her 1st skill, and an AoE defense break with her 2nd. When Linda uses her 3rd skill, Comet Summoning, she launches multiple attacks on all enemies. In addition, she casts Soul Protection on the ally with the lowest HP ratio for 2 turns, allowing the unit to resurrect with 30% HP if they get killed. 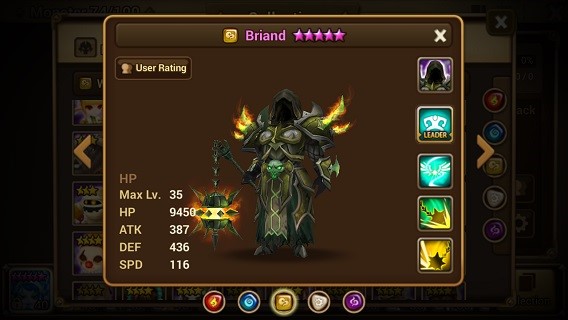 Briand is a natural 4 star HP tank, with the ability to disturb HP recovery with his first skill, and delivers an AoE attack break on his second. Throw Despair runes into the mix, and you have one beastly crowd controller – who can also revive a dead ally with his 3rd skill, Supply. When Briand restores life to a fallen team member, the HP ratio of all allies gets rebalanced. This is absolutely brilliant when only one of your teammates has been getting pummeled by your enemy, and there is plenty of HP to go around. Unfortunately – and the reason Briand barely even made it on this list – when you are autoing, and one of your allies kicks the bucket, Briand’s AI doesn’t bother to check how much HP your team is going to be left with when he revives the dead monster. This can have disastrous consequences if your healer isn’t ready to move on the very next turn. 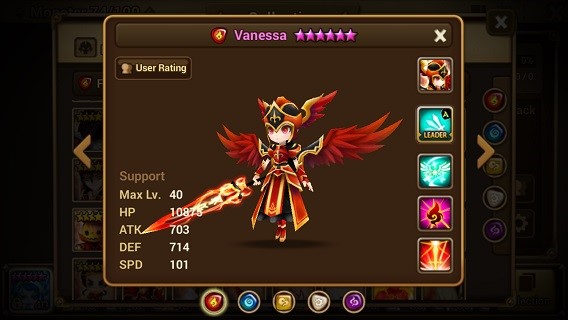 This nat 5 is a favorite in G3 Arena defenses – as well as offense teams – for several reasons. Vanessa has a leader skill that increases the speed of Arena allies by 33%, as well as elemental advantage over Arena dominator Lushen, and a 2 turn defense break on her 2nd skill. Oh yeah, and she can revive a dead ally with 30% of their HP, which they will continue to recover 15% more of for each of their next 2 turns. Warrior’s Return has a cooldown time of 8 turns (6 turns when the skill is max level). 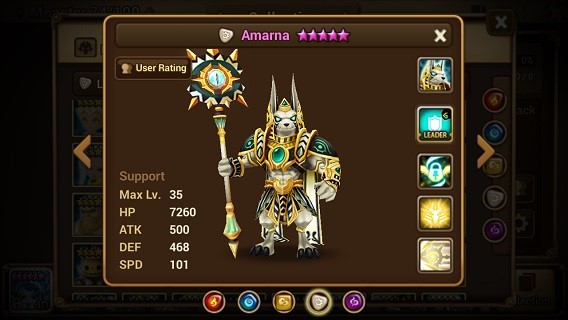 The light anubis is a natural 4 star support unit who brings a double single target attack with a chance to disturb HP recovery as his first skill, and a triple attack with a chance to leave a branding mark for his 2nd skill. Necro and raids immediately come to mind. Amarna’s 3rd skill, Secret of Eternal Life, automatically heals the ally with the lowest HP proportionate to your attack power when you aren’t even using it (as long as it isn’t on cooldown). However, when you do use this skill, all dead allies will be revived with 20% of their HP. Unfortunately, this skill has a ridiculous 12 turn cool time, that skills up to 9 turns maxed. 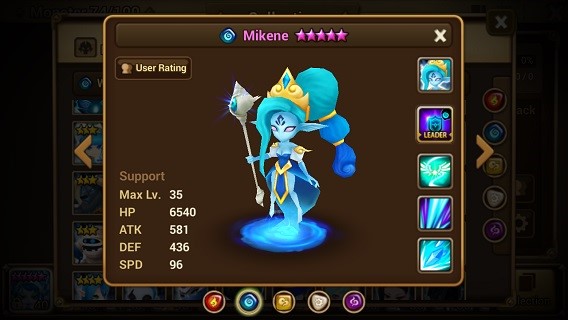 While the water undine is a necessary component for fusing 2 different 5* monsters, she is definitely one “food” mon that is worth building for your own personal use. When awakened, Mikene’s 1st skill will freeze the target if it lands as a critical hit, and her 2nd not only offers AoE glancing debuffs to your enemy, but also heals the ally with the lowest HP by 25%. Her 3rd skill – simply named Revive – will resurrect one dead ally with 40% HP. Alternatively, if Mikene is the one most likely to die, you can use this skill on her to cast Soul Protection for 3 turns, which will revive your undine with 40% HP if she bites the dust. Revive has a 7 turn cooldown, that can be skilled up to 5 turns.

Who doesn’t want this nat 5 with an axe to grind? Craka can deliver 2 turns of DoTs with her 1st skill, and slams all enemies twice with a chance to reduce their defense for 2 turns with her 2nd. For the dark hell lady’s 3rd act – Summon Perpetrator – she will bring an ally back to life with 30% HP, 1 turn of invincibility, and all of their skills immediately available (even if they were previously on cooldown). This skill has a cool time of 7 turns, that skills up to 6 turns. 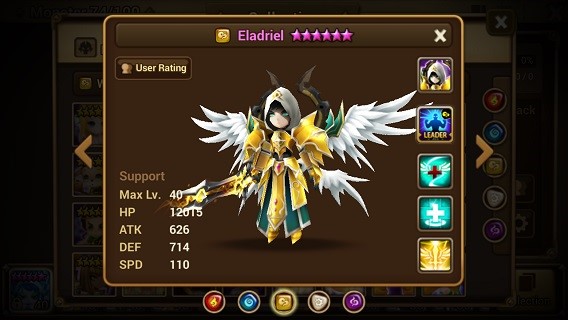 Sporting a higher base speed than all of the other archangels, Eladriel can remove a beneficial effect from an enemy – while dealing damage relative to his defense – with his 1st skill. The wind archangel’s 2nd skill heals an ally by 50% of their HP. Eladriel’s 3rd skill – Archangel’s Mercy – will resurrect a dead ally with full HP, sacrificing half of his own HP to do so. This skill can be reused in 8 turns, 6 turns when the skill is at max level. 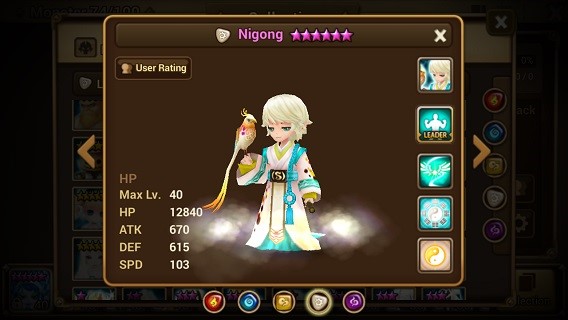 If you have been lucky enough to summon this nat 5 light monster, you already know why he is in the number 2 spot for top rezzers. While his 1st skill attacks an enemy with a rather piddly chance at putting them to sleep, and his 2nd deals single target damage relative to how much HP has been lost, Nigong’s 3rd skill can turn the tide for your entire team when faced with an AoE nuker. Heavenly Protection allows Nigong to cast Soul Protection on all allies for 3 turns. While under Soul Protection, if your team gets “Lushened” – for instance – they will all return from the dead with 30% HP. And in 8 turns (6 skill maxed), you can cast it again. 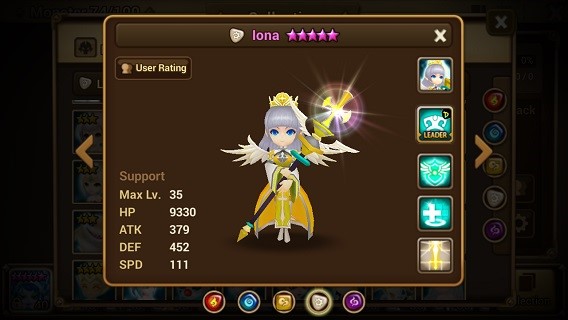 It probably comes as no surprise that Iona came in as the best reviver in Summoners War. She heals herself when she attacks an enemy with her first skill, and heals the two allies with the lowest HP by 25% and 15% with her 2nd. The light epikion priest’s 3rd skill, Light of Revival, can raise an ally from the grave with 60% of their HP intact. What’s more, the reanimated teammate also receives a 3 turn defense buff. And the only “cost” is an 8 turn cooldown (6 at skill max). ]]>