<![CDATA[The Water Valkyrja, also known as Camilla when awakened, is a natural 5 star water monster. Her base attack speed is 100. <table align="center"> 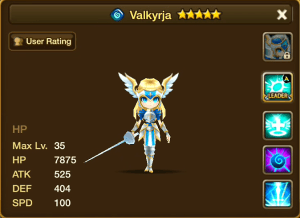 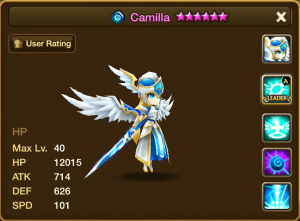 Awakened Bonus: Increases Critical Rate by 15%. Leader Skill: Increases the Critical Rate of ally monsters in the Arena by 33%. Skill 1: Sword of Promise: Attacks with a sword. [Seal of Water] is automatically activated if the enemy dies.

Skill 2: Seal of Water: Attacks an enemy, dealing damage proportionate to the enemy’s MAX HP, and decreases its Attack Speed for 2 turns. (Reusable in 4 turn(s)) Skill 3: First Aid (Passive): Decreases the inflicted damage by half when you’re attacked with a critical hit and removes all harmful effects. Additionally, it recovers 10% HP each turn. [Automatic Effect] Rune Recommendations[2/4/6] Full Tank – Energy(Hp%/Hp%/Hp%) Some damage – Fatal/Energy(Spd/Hp%/Atk%) Hybrid Tank – Violent/Energy(Hp%/Hp%/Resist%) – find speed and hp% substats Damage – Rage/Blade(Atk%/Crit D%/Atk%) Please leave your review about her below and rate her as well so other players can benefit from your experience!]]>