Why yes, actually. I was torn on deciding whether I wanted to get Lanett or Brig on my main account, and it’s not just because Brig’s a main character in a fanfiction I’m working on, called Through the City We Go. At first glance, most people are just going to brush Brig off as Galleon or Frigate skillups, like they did Barque. However, just assuming that Brig would be best as a storage guardian or food would be a pretty bad thing to do, and I’ll explain why and what runesets I would recommend on him. Brig shares the same second skill as Galleon and Barque; that being Pirate’s Strike. He’ll attack an enemy and absorb 30% of their attack bar. When fully skilled up the cooldown of this skill is simply reduced to two turns – quite impressive, if you ask me. Like most monsters, though, Brig’s best quality is his third skill. His third skill, Disarm, will attack an enemy and block beneficial effects for two turns, along with breaking their attack power and defense for two turns. In other words, it’s basically like a better version of Bernard’s second skill, not to mention it has a huge multiplier, at a whopping 800%! That means that it’ll deal 800% of Brig’s attack stat before damage reduction (defense, buffs, etc.) I’d go Violent and Focus on Brig; SPD/Crit DMG%/ATK%. This way he can set himself up to nuke someone; the Violent runes will reduce his cooltime if he gets additional turns and Focus will make sure he lands his debuffs. Now that we’ve established to keep at least one copy of Brig, I apologize for what’s bound to be constant pirate jokes throughout this article. 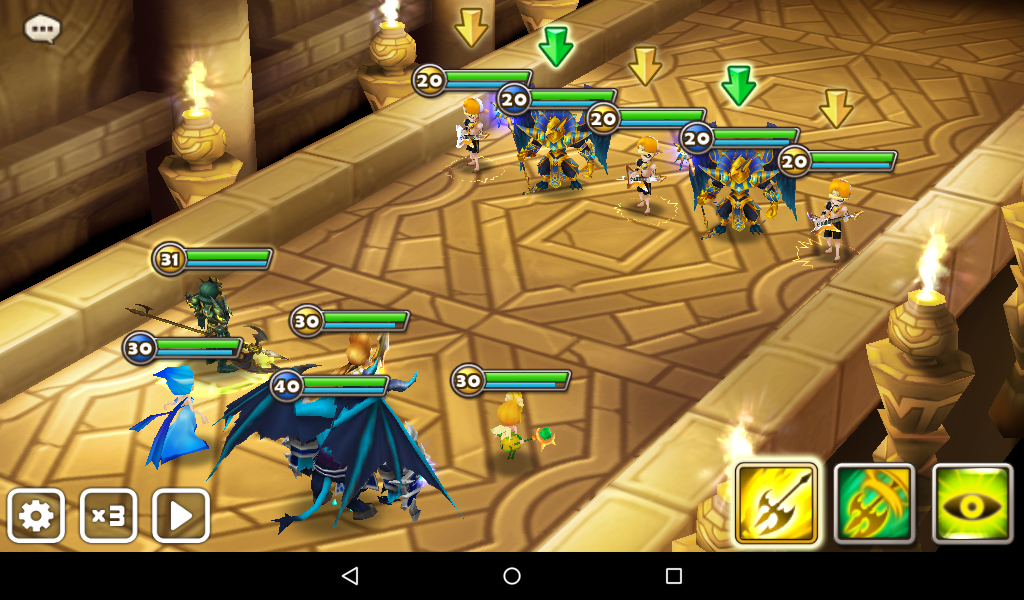 This stage isn’t that much of a threat. I guess you can say that their Barque is worse than their bite! Here, we have three Barques (wind Pirate Captains) and two Qebehsenuefs (water Horuses) The Threat: Definitely Barque. Barque has been a previous Hall of Heroes before, so you might say to yourself that he’s not that big of a deal. Well, you’re totally wrong, buddy, because Shoot n’ Slash is actually really strong. If you don’t know what that skill is, Shoot n’ Slash is Barque’s third skill, where he uses his first skill and then connects it with his second skill. The multipliers are all the same, so it’s like he used his first skill, proc’d Violent and then used his second skill. Basically, he can one-shot someone if he uses Shoot n’ Slash at the later stages. Qebehsenuef is also pretty annoying, too. His third skill, Shout of Fury, will increase the attack power and critical rate of all allies for two turns, and will make a designated target Invincible for one turn – certainly he’s wonderful in Katarina teams. Thankfully, the Barques aren’t Katarinas, but it’s still bad when either of these two birds whose name sounds like a sneeze gets their turn. Seriously, I had to try B2 three times because of these guys. They buffed everyone, made a Barque invincible, and then said Barque shot and then slashed Leo, effectively killing him. It was terrible. The Solution: Get rid of Qebehsenuef first. He’s main buffer of the team, and will be a major nuisance if you don’t kill them quick. Make sure to keep all the Barques stunlocked as you work on Qebehsenuef. This way, they won’t be able to unleash their nuking skill. Once all five monsters are defeated, you can continue on to stage 2, which may be even more annoying than stage 1, mainly because of the secondary monsters (e.g. the monsters that aren’t Pirate Captains) 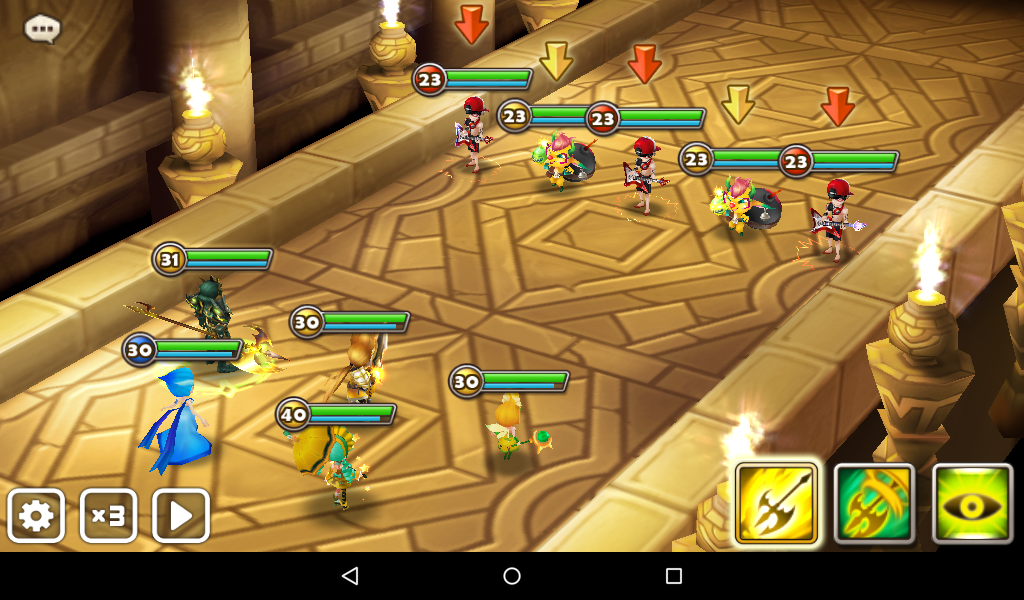 It was with a loud Carrack that the fire Pirate Captain fired his pistol, instantly detonating all the bombs on the target! This stage consists of three Carracks (fire Pirate Captains) and two Taurus’ (strategically placed wind Kobold Bombers) The Threat: These Kobold Bombers were placed here for a reason, you know. My joke of this stage was actually truth. Carrack’s third skill is Detonation Shot, where he’ll attack a target and blow up every bomb that’s on the target. Basically, he’s like a budget Seara for those who aren’t lucky enough to get Seara. He’s also been placed with Taurus, the wind Kobold Bomber. His second skill, Time Bomb, will install a bomb on all enemies for two turns and increase his own attack bar by 50%. His third skill, Electric Bomb, will attack all enemies and increase their skill cooldown for one turn. In other words, if you have an active cleanser, you are straight outta luck if one Taurus uses Time Bomb and the other Electric Bomb. Remember that Carrack’s third skill will detonate all bombs on a single target, and then you’re free to cry as Taurus uses his second skill and lands all the bombs on your allies. The Solution: Passive cleansers. More specifically, Veromos. Though Taurus’s Electric Bomb increases cooldowns, it doesn’t increase the cooldowns of passives that don’t have one, meaning that monsters like Veromos are free to use their passives as they please, much to the rage of Taurus. Veromos can cleanse most literally almost anything off of your monsters – the only things he can’t are sleep, stun, and freeze. Because bombs aren’t on that list, he’s pretty much the perfect solution against this stage. Carrack can’t make the bombs explode if the bombs have already been cleansed, so try to make sure your Veromos will at least be faster than Carrack. 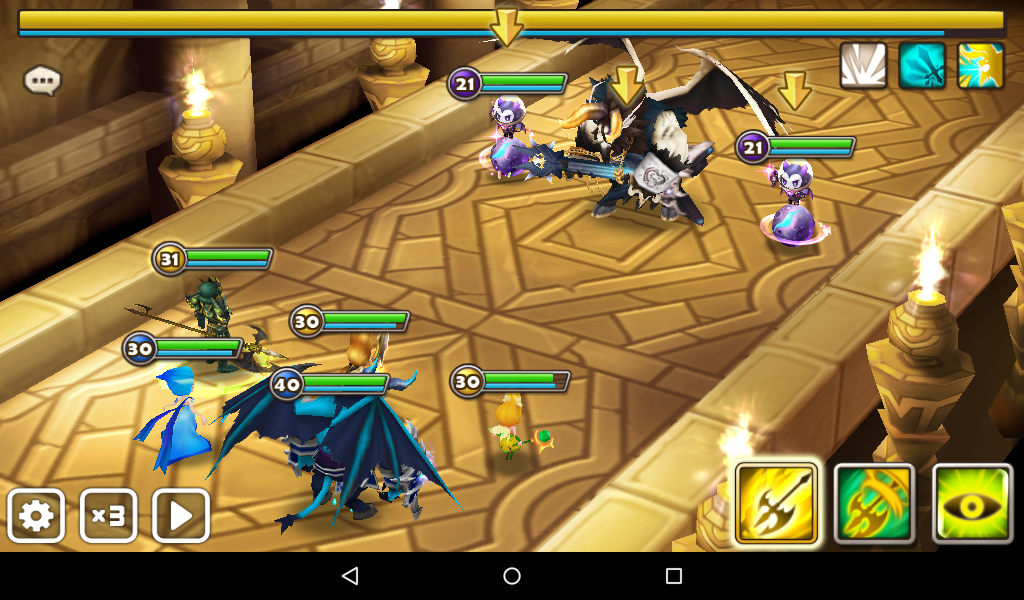 Is it coincidence that the dark Brownie Magician’s name is Korona, there’s a beer named Corona, and I have a headcanon that my Frigate’s an alcoholic and his favorite drink is Corona? I THINK NOT! Here, the miniboss is Shan (light Chimera) and two Koronas (dark Brownie Magicians) The Threat: I’d say that the biggest threat would be Shan. His third skill, Holy Calling, will stun all enemies (without attacking them) and then increase the attack bars of all allies by 25%. He’s also a Squallmera, aka a Chimera with Squall as their second skill. With Squall, Shan will attack an enemy. It may not sound like much at first, but the faster he is, the greater the damage becomes, and he’ll increase his speed for two turns if he lands a Critical Hit with that skill. Korona just sucks. He really sucks. You may think that he doesn’t; after all, he’s one of the two Brownie Magicians with Fever Time as their second skill. Fever Time increase everyone’s attack power and critical rate for two turns, not to mention he has an AoE strip. Who doesn’t love AoE strips? However, the strip not only removes all beneficial and harmful effects off of the allies, but he puts them to sleep. The turns of the sleep relates to how many effects were removed; meaning that Shan’s stun will be turned to sleep when Korona uses his third. The Solution: Just kill Shan. Keep Korona stunlocked or just ignore him if you want to. No one likes you, Korona. You’re like that person who blurted out spoilers to The Force Awakens when I went to see it in theaters. I was salty for weeks afterwards, you have no idea. 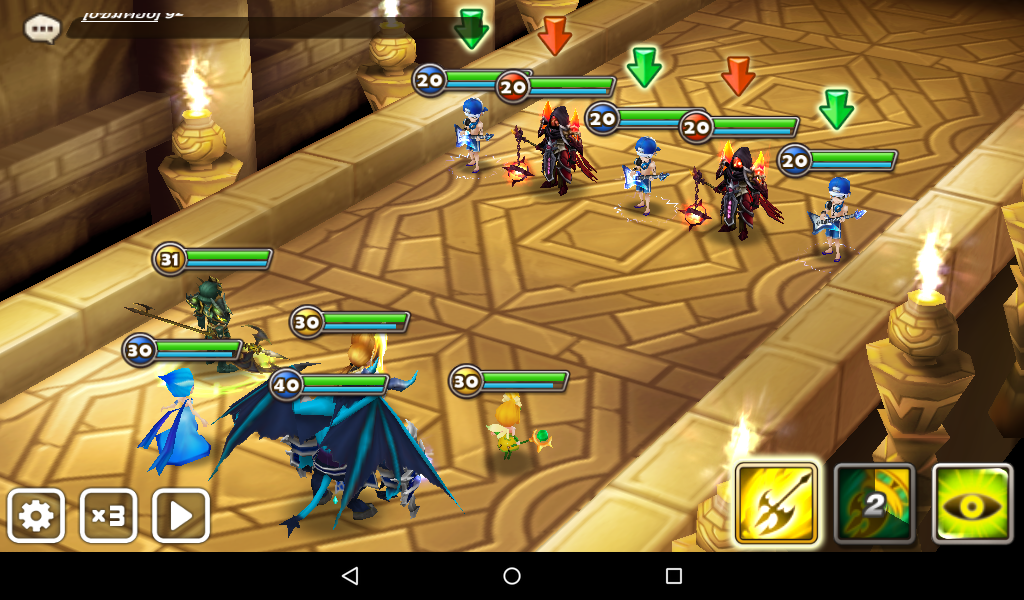 It’s almost Time to Loot the boss stage, but unfortunately we have two more waves and one more bad joke to get through before we can. The Threat: Galleon. There’s a reason why people say he’s the best Pirate Captain (of course, Frigate’s better, but I could be biased). That reason is because he leaves a 2-turn AoE defense break on all enemies, and increases the attack power of all allies for two turns. Truly it’s a deadly combination. Arnold is pretty scary, too. It’s mainly because of his third skill, Extortion, in which he drains life from a targeted enemy. The damage is equivalent to 30% of Arnold’s Max HP, so basically you’re going to have a really bad time on the later stages. This is because Arnold’s Max HP, along with everyone else’s base stats, increase the higher you go up. Of course, a B1 monster is going to have much lower stats than, say, a B7 monster, so you might find out that what was once a weak pinch turns into a one-hit kill when you go up a few stages. The Solution: Take out Galleon first. Although he doesn’t do much damage-wise, he will make it easier for Arnold to kill you because of the attack buff and defense break. Once Galleon’s gone, you can work on killing Arnold. I’d recommend bringing a healblock so that he can’t heal himself with Extortion. You’re almost done, just gotta advance onto stage 5 now! 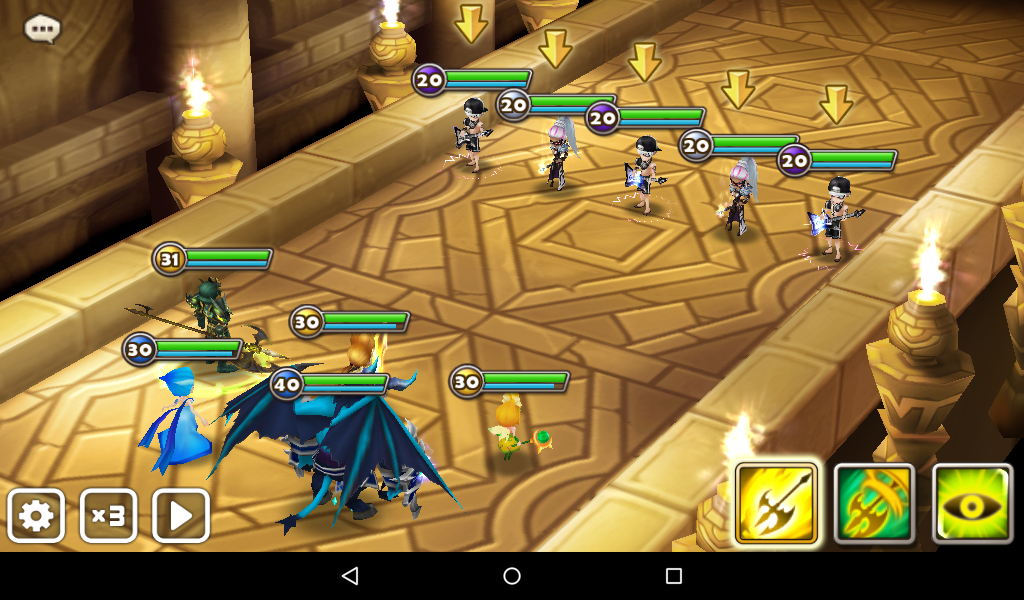 It’s with a Pang of regret that I have to tell you that we’re charging Full Speed Ahead into the boss stage, which means soon we’ll be running out of bad jokes to use. This stage consists of three Frigates (dark Pirate Captains) and two Pangs (light Rakshasas) The Threat: If you’ve even read one of my articles, you’ll know that I absolutely adore Frigate. His third skill, Full Speed Ahead, increases everyone’s attack bar by 50% and will decrease their skill cooldowns by one turn. It’s great. Unfortunately, it’s not so great when you’re on the receiving end of a shirtless Pirate Captain speeding everyone up. Pang is also trouble, too. Her passive skill is like Hong Hua’s Fire Dragon Attack, except it applies for every hit. If you don’t know, I’m talking about how Pang can elongate the harmful effects of enemies that she hits for one turn. It’s really annoying when that two-turn defense break becomes a three-turn defense break, etc. and it’s even potentially deadly. The Solution: I’m sorry to say you have to take out Frigate first. He’s a beautiful piece of eye candy I don’t want to beat up, but a girl’s gotta teach people about the Brig Hall of Heroes somehow. Pang won’t be much of a threat, as her attack power isn’t that high, even in the later stages. Keep her stunlocked as you take out Frigate, and then kill her. You can now advance on to the final stage of the Brig Hall of Heroes! 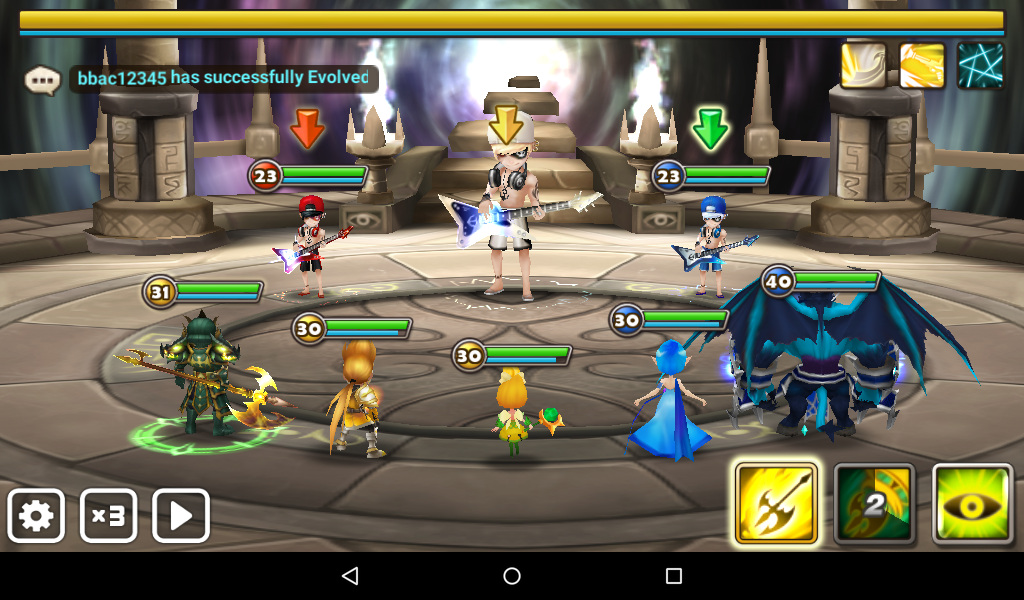 We’ve come to the boss stage, which has the most variety of all the stages. The main boss will always be Brig, but his lackeys will change. In this case, his lackeys are Carrack and Galleon. The Threat: Like always, the threat varies based on who the lackeys are. In this case, the biggest threat would be Galleon because of his AoE defense break. Brig is also a major threat, as I’ve described why earlier in this article in “Is Brig Usable?” It’s mostly because of his third skill, Disarm. The Solution: Because the threat varies, the solution varies. In this case, I’d say “kill Galleon first, stunlock Carrack, and then take out Brig” You don’t have to kill the lackeys if you don’t want to because of the recent Quality of Life change that Com2uS did a little while back. I hope you enjoy this anniversary Hall of Heroes, because I enjoyed it too! I’m Sara Ann, and I’ll see you in my next four or so articles that are getting released today because I still have three more choices to cover.]]>