…No. Conrad is actually one of the most unreliable revivers out there, next to…I think Cheryl, the light Pixie. His third skill, Trade, attacks an enemy, and randomly revives a dead monster with 30% HP if he kills someone with this skill. However, if all allies are alive at the moment of the enemy’s death, he’ll instead grant a shield proportionate to his level on all allies for 2 turns. Remember that you can’t choose which ally he revives unless there’s only one dead ally. Most revivers have something like that (minus, of course, Cheryl, but she’s the exception like Conrad). Heck, even Janssen the dark Viking is somewhat reliable, due to the fact that despite the he revives everyone with 1 HP, it’s still an all-person revive, increases everyone’s attack speed for 2 turns, AND still fills everyone’s attack bar by 30% per fallen ally. (Please note that I’m not saying that building Janssen is a good idea.) Runes: Violent + Energy; SPD/HP%/HP% 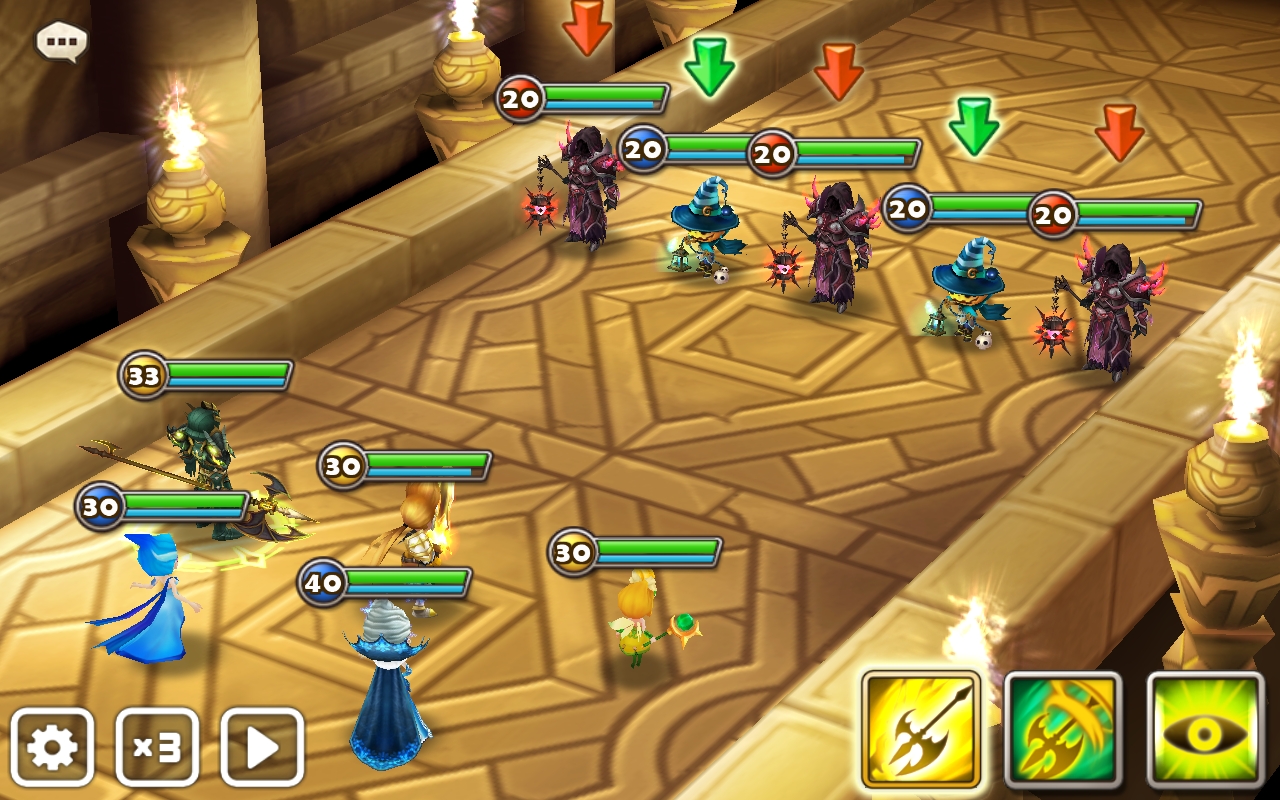 Let’s, of course, start with stage 1! This stage consists of three Arnolds (fire Death Knights) and two Chillings (water Jack-o-Lanterns) The Threat: Oh, it’s Arnold who’s the big threat here. Definitely Arnold. Did I ever mention that before Mo Long was around, we had Arnold? Mo Long’s most known for Reckless Assault, which takes away 70% of the enemy’s HP, but at the same time Mo Long takes that same damage (so let’s say Charlotte takes 8000 HP damage, then Mo Long would also take 8000 HP) Well, Arnold sorta does that. He drains life from the chosen enemy with Extortion, meaning he heals this damage. This damage is a flat 30% of his HP, and when he’s all done, he also blocks healing for 2 turns, so don’t even try and think about using a healer on the mon he chose after Extortion. Chilling, meanwhile, is more of a support monster. He provides critical rate increase, speed buffs, and also has a passive that lets him steal buffs from the enemy he attacks with each hit and place it on himself. His speed also increases according to how many buffs he has on him as well. The Solution: Take. Out. Arnold. I cannot stress this enough if I tried. When you get up to the higher floors of Hall of Heroes, the HP of everyone starts to get stupid high; meaning that 30% of Arny’s HP here could be the entire HP of, say, your Konamiya or your Belladeon. I’m still not sure if Destroy runes can work against him and reduce the damage he deals, but in case it does, I’d recommend using them on him. Now let’s move onto Chilling. Chilling isn’t that big of a threat, but I’d still recommend using caution near him just to be safe. Keep him stunned while you’re working on Arnold, and while you’re at it, if you do have someone who can remove buffs, like Belladeon or Aquila, then they could also be pretty good counters against him to get rid of the buffs he stole off of you, or the buffs he placed on his teammates. With that, let’s move on to stage 2! 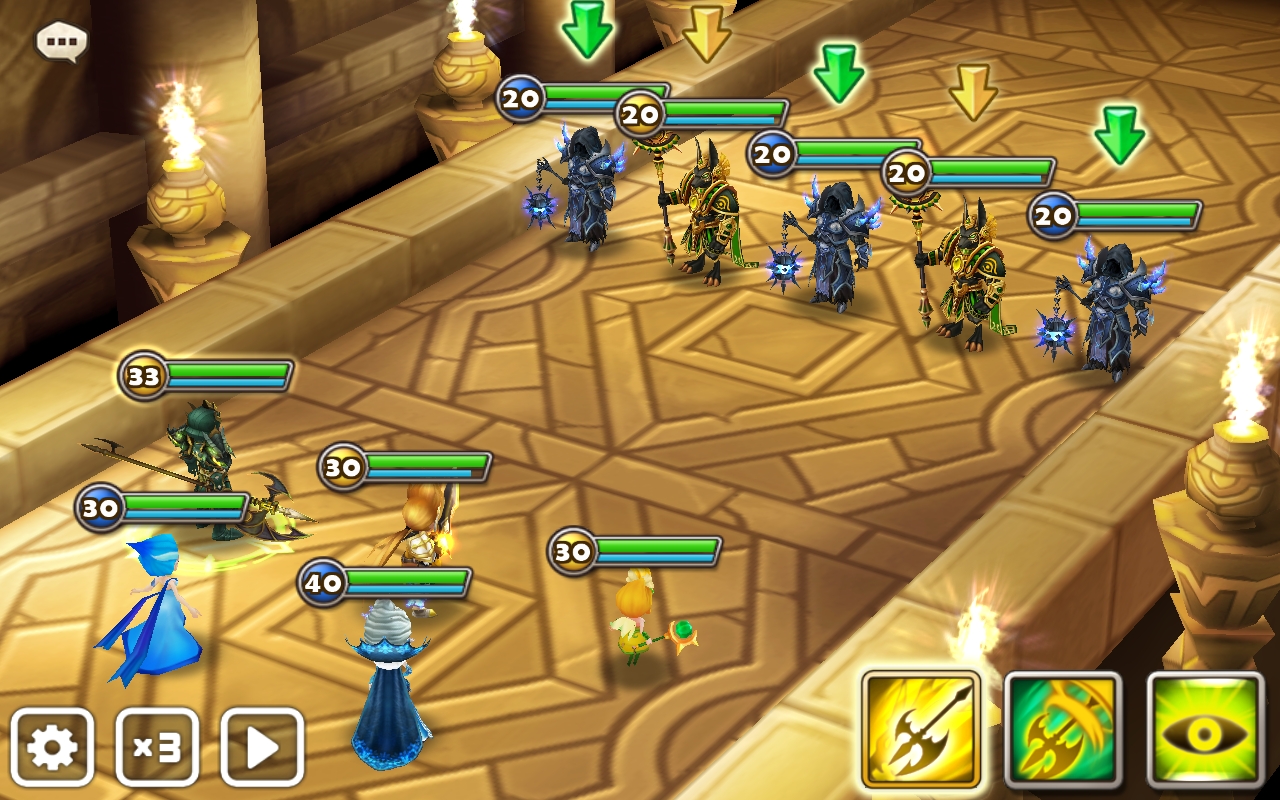 Here we go! Here, we have three Fedoras (water Death Knights) and two Iunus (wind Anubises). The Threat: Iunu has become a pretty good Tartarus Labyrinth monster, actually! His second skill, Brand of Hell, attack an enemy three times, the damage increasing with each attack and also leaving a Brand effect for each hit on the monster. His passive, Underworld King’s Return, is what makes him stand out, though. At the moment of death, he’ll revive himself with 30% HP and his attack bar at 100%. He’ll also increase his attack power by 100% every time he revives (which stacks up to 3 times). But while I’m rambling on about these guys, I just wanna take a moment to talk about Fedora. You see, Fedora was last month’s Hall of Heroes, so I know way too much about him now. His third skill, Decline, will remove all harmful and inability effects off of his allies, grants them Endure for 1 turn, and Immunity for 2 turns as well. He has a stupid long cooldown on that skill, but other than that, this makes him a really big threat, because one turn of the enemies not dying and having immunity could be enough for you to catch a bad case of the death. The Solution: Kill Fedora first. While I usually like to take out damage dealers and revivers, I’d probably go for Fedora because he’s practically as dangerous as a reviver. When you get up to the higher floors of Hall of Heroes, he’s going to be really fast, and he may cut ahead of you to use his third. Bring a buff stripper specifically for this stage. I can’t tell you how many times someone like Soha or Belladeon would save your butt from the threats. If you can’t, though, try to at least stun the Fedoras. Someone like Maruna and a Chakram Dancer would be efficient; preferably someone like Talia or Melissa would work for the Chak. 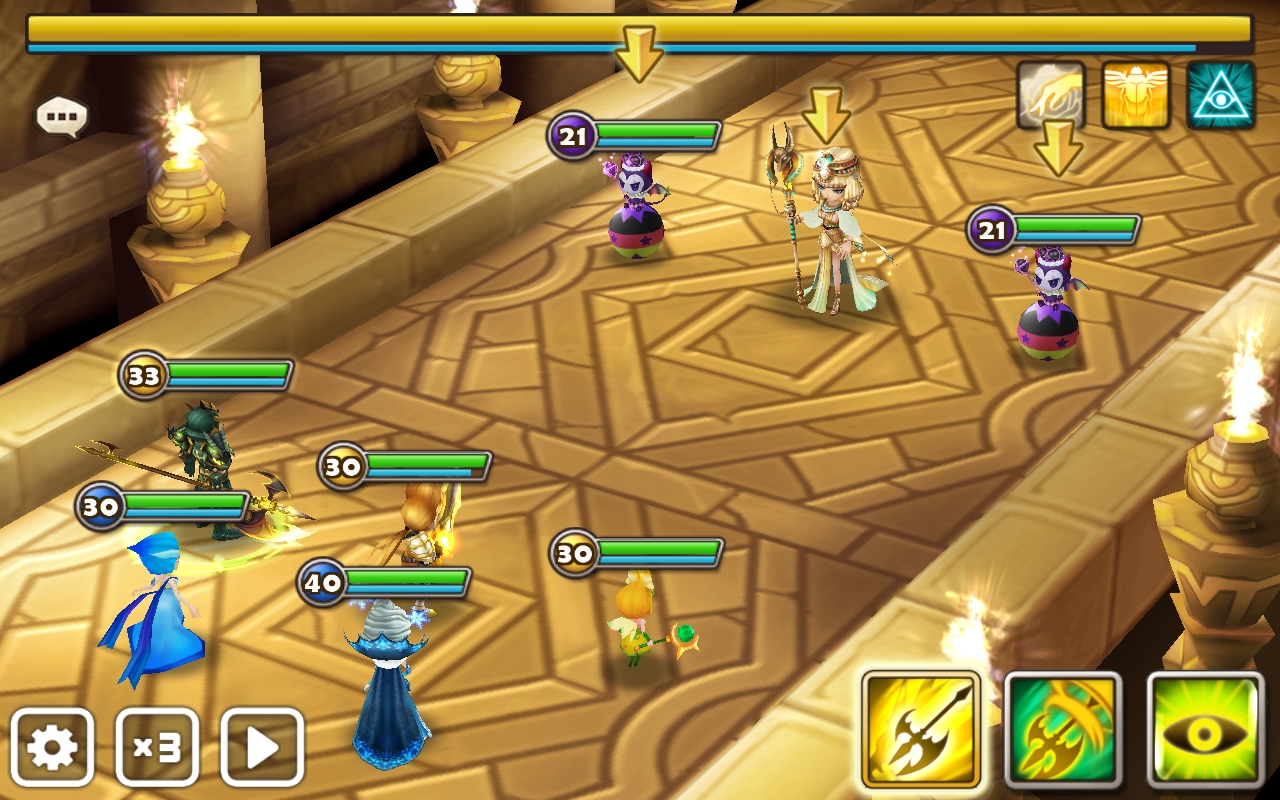 Miniboss time! Here, we have Isis (the light Desert Queen) and two Koronas (dark Brownie Magicians) The Threat: There’s no one here who can outright kill you, but I’d still advise you to watch out. Isis is unique in that she’s one of three obtainable monsters who can provide Oblivion as a debuff. Her third skill, Gaze of Oblivion, silences all enemies and also puts them under Oblivion for 2 turns. This is, like, the ultimate skill blocker out there – active cleansers can’t cleanse it off, Veromos can’t cleanse it off because of Oblivion, it’s crazy and I really want an Isis tbh. It doesn’t help that Korona is also a stripper, too. He’ll remove all harmful and beneficial effects off of his enemies with his third skill Kindness Gone Wrong. He’ll also put everyone to sleep – the amount of turns they’re asleep equivalent to how many buffs and debuffs were removed; so if an attack buff and two DoTs were removed, the monster will be asleep for 3 turns. The Solution: Take out Isis. You can completely ignore Korona if you want, because in HoH, you don’t have to kill the lackeys in order to proceed on. You used to, but not anymore. And besides, Isis is just really annoying and you want to be free of her as soon as possible. 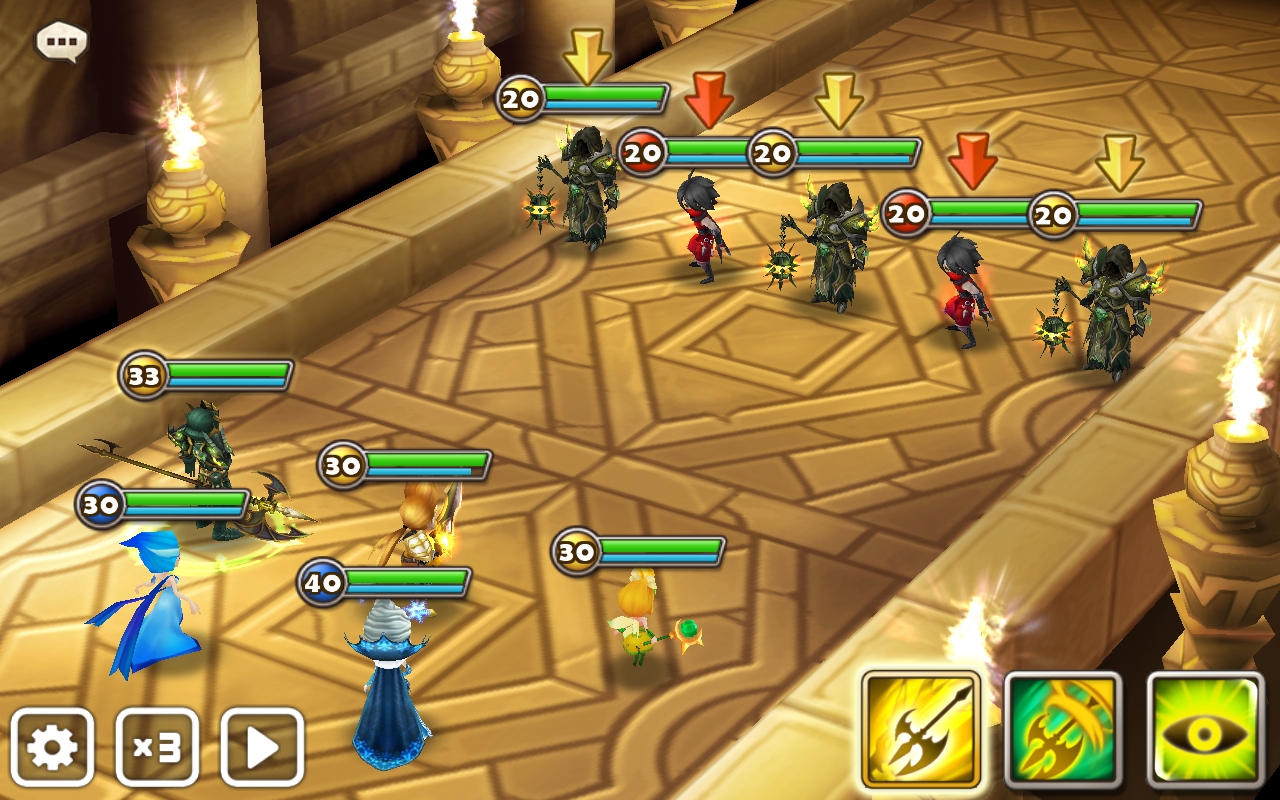 This stage consists of three Briands (wind Death Knights) and two Garos (fire Ninjas). The Threat: I always say that the revivers are the biggest threats in Hall of Heroes and ToA, and this is no exception. Briand’s third skill, Supply, will revive an ally with 1 HP, before balancing out the HP of the team so that they’re roughly the same ratio, meaning that someone almost dead would have more HP, the ally just revived would have HP, etc. It’s gonna be hard to kill Garo, too, because his passive Narrow Escape got buffed a while ago, but it’s still really good. Now, once a turn at the moment of death, he’ll completely negate the damage the killing blow would cause, and increases his attack bar by 50% as well. He’s also a pretty good damage dealer, too, so you could get killed by him and be unable to kill him. The Solution: Kill Briand first. I always like to kill the revivers first things first so this way they can’t undo the hard work that you’ve been doing against the other monsters. That means all three Briands, because having a reviver revive another reviver isn’t very fun. (I dare you to say “reviver reviving another reviver” three times fast.) Once all three Briands are dead, you can work on killing Garo. He’s gonna be annoying to deal with, that’s for sure, but let me tell you a secret – multihit skills cancel out his passive! He only negates the attack that would’ve killed him once per turn – meaning that if Charlotte uses Wind Guardian Angel, he’ll cancel hit 1, but hits 2 and 3 will kill him. 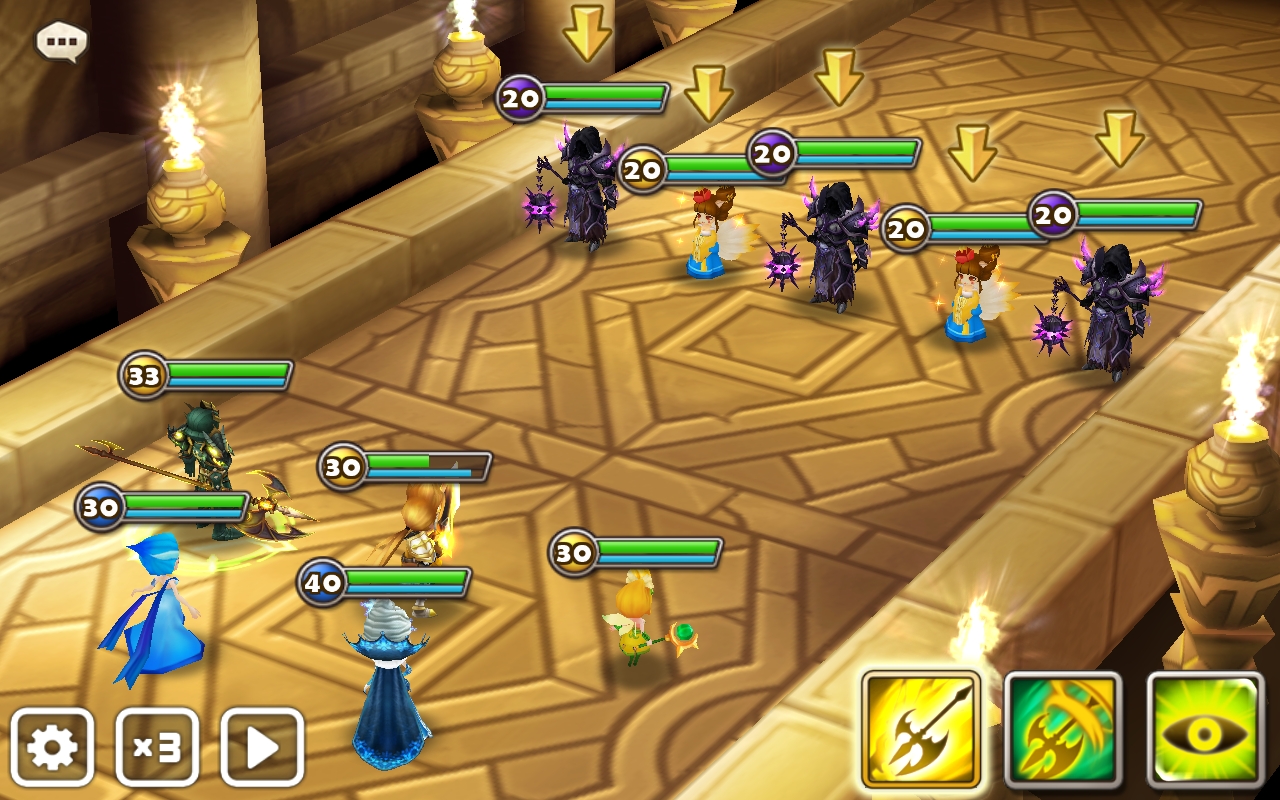 Here we go! It’s the last stage before the boss! Here, we have three Diases (dark Death Knights) and two Arangs (wind Nine-tailed Fox). The Threat: It may not seem like it at first, but Dias is a big hindrance when you just want to clear the Hall of Heroes reasonably fast. His passive, Control, decreases the damage his allies take by 15%, and while it doesn’t apply to himself, what does apply to himself is the fact he reduces his chances to get hit by a Critical Hit by 50%. There are two monsters who are the most recommended for Raids as a damage reducer for the team. Dias and Darion are those two. That tells you how good he is as a monster in general, and how it will affect you on your quest to get some Hall of Heroes pieces. Arang, meanwhile, packs quite the punch. She’s got the fifth highest base attack in the game – beaten only by the Phoenixes – and her third skill, Sweet Talk, does a ton of damage. Don’t get me wrong, all her skills hurt, but Sweet Talk has a massive multiplier. She’ll attack an enemy, breaking their defense, attack and also decreasing their speed. Oh yeah, and she’ll also have her damage increased by 50% if she attacks an enemy under harmful effects. The Solution: Take out Dias first. That includes all three of them, because their passive don’t stack, but they do reactivate once one is dead. Also, did I mention that Dias 1’s passive won’t affect himself (damage reduction-wise) but Dias 2’s passive will reduce the damage he takes? Yeah. I know what you may be thinking: shouldn’t we go for Arang first, since she’ll do the most damage of the bunch? Yeah, but you can just keep her stunned while you work on Dias. It’ll be easier to kill her once all three Diases are dead, anyway, so while you work on killing Dias, you can just keep Arang safely stunned in the little stun-bubble whatever (I don’t know where I was going with this), and when you kill all five mons, we can move on to the boss stage! 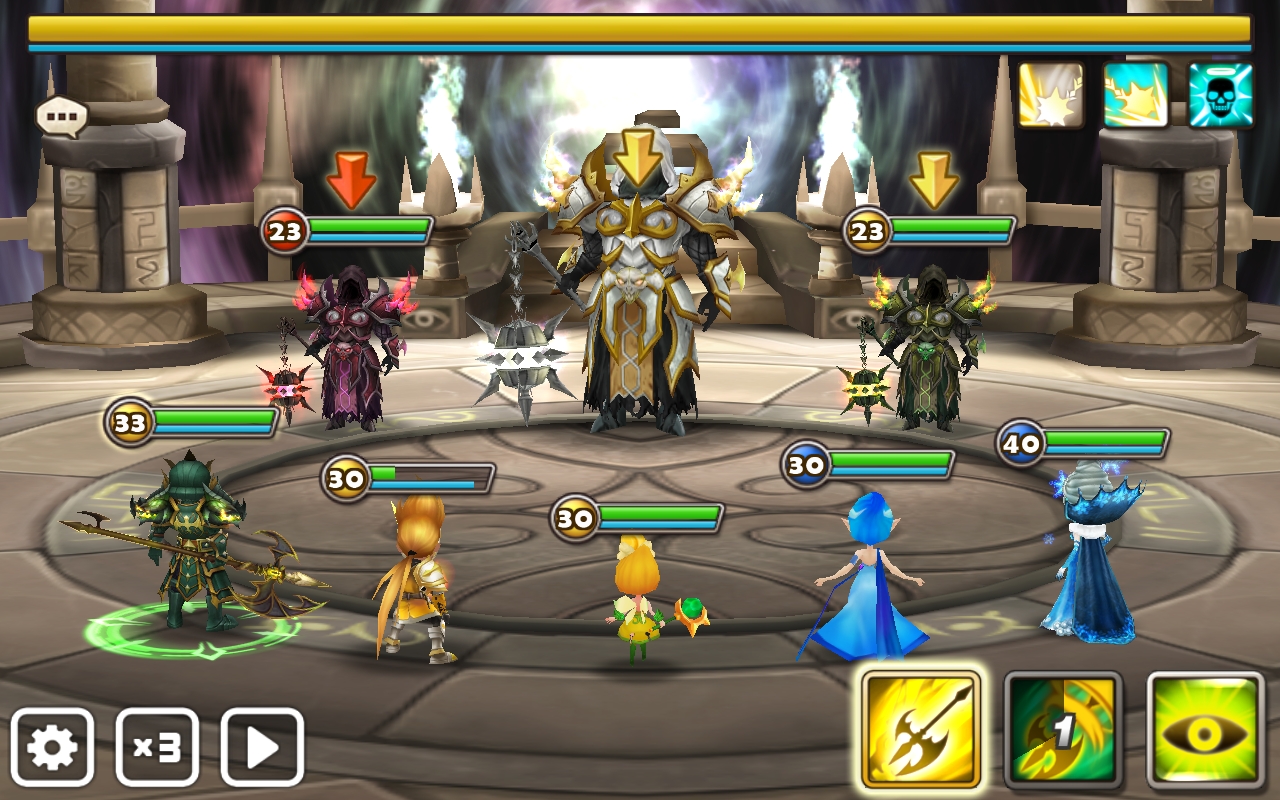 It’s finally time for the boss! This stage always has the most variety of the Hall of Heroes floors because the elements of Conrad’s lackeys differ. In this case, though, we have one Conrad, an Arnold, and a Briand. The Threat: Again, the threat always differs, because the lackeys always differ. In this case, Briand would be a threat reviver-wise, but Arnold is the biggest threat damage-wise. The Solution: One More Time!, (ah, I love SW puns) the solution for this stage will differ because the lackeys will always be different. In this case, though, I would usually recommend just straight-up going for Conrad. I understand that’s going to be difficult to do in some stages, due to Dias being the lackey, but you’re gonna have to. I always say “take out the reviver first” because it’s true. In this case, though, the big boss is a reviver, and it’s not necessary to kill lackeys anymore, meaning that you could target only Conrad, and when he’s dead, you’ve instantly won it! Anyway, I hope you enjoyed this Hall of Heroes article! Stay tuned, though; we’re gonna have four more coming out; one for each option! Which choice did you pick? Tell me in the comments! I’m Sara Ann, and I’ll see you in the next (four) article(s)!  ]]>