Olivia’s actually the best of the five selections this year! If you already have Tilasha and Conrad, I’d definitely suggest going for Olivia, because the whole Neostone Agent family (minus Illianna, rip) is usable as well, so even if you already have her, she can make some great skillups. Olivia, like most other monsters, requires some skillups herself to shine, but once she gets them, she’s REALLY good. Her second skill, Briefing, when skilled up, goes down to 2 turns. Keep in mind that with Briefing, she’ll completely fill up a chosen ally’s Attack Bar and then cleanse ALL harmful/inability effects off of them. Lock Down, when skilled up, is three turns, in which she’ll attack an enemy twice, decrease their attack bar for 25% each hit (so 50% in total), and then increase everyone’s defense for 3 turns. Basically, she can have infinite defense buff up for her team, which makes her great for defense-based teams, like Copper/Bulldozer, Racuni, +1. In this case, the +1 would be Olivia. I already use Olivia on a daily basis in Guild Wars (I got one from a Legendary Scroll), and she’s totally worth building. Her main use right now is being a backup defense buffer in case Randy’s third is on cooldown and increasing people’s attack bars – this is mainly because I don’t have an Imesety, but hey, either way Olivia’s still great. Rune Recommendation: Swift/Violent + Will; SPD/HP%/HP% 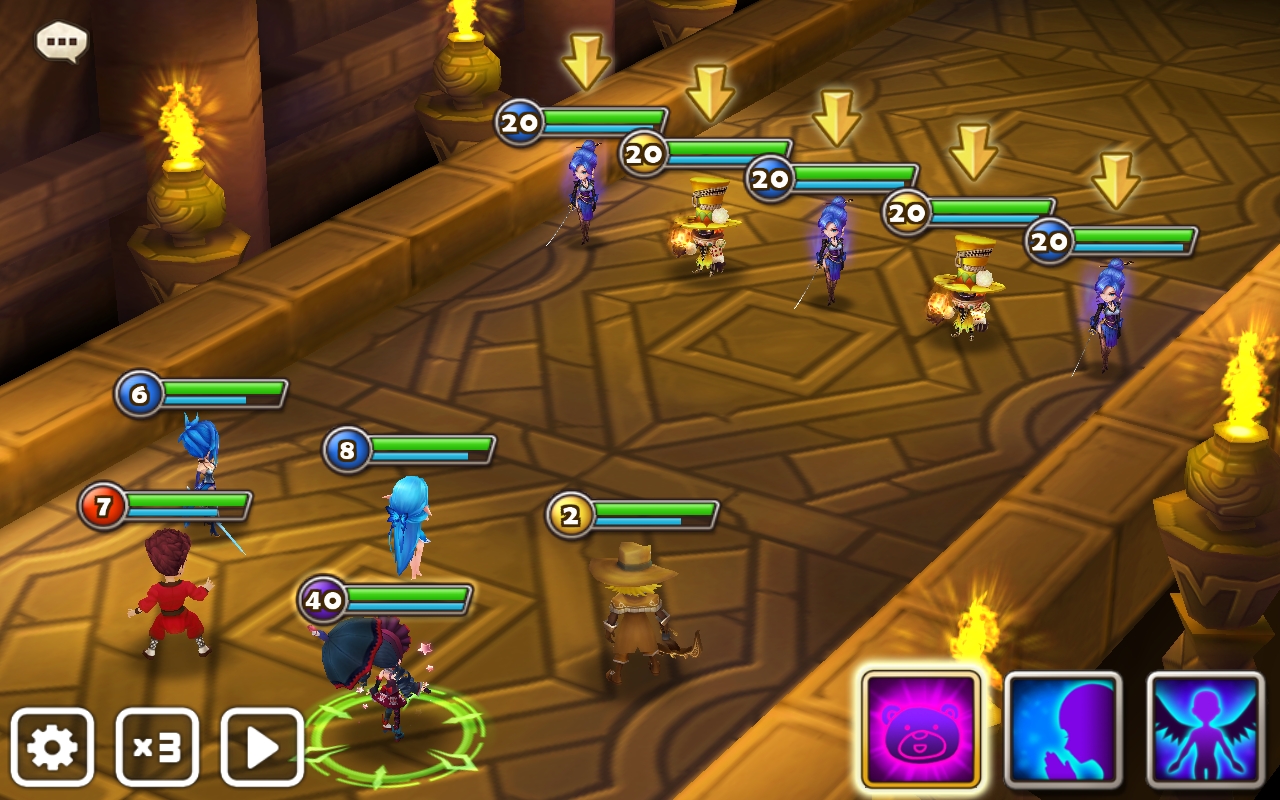 As always, we will begin with Stage 1! Today’s stage 2 is three Emmas (water Neostone Agent) and two Morrises (wind Dice Magicians). The Threat: Emma isn’t really a threat, but her healing is quite annoying. Her third skill, Medical Support, will heal all allies for 30% of their Max HP, and then raises their defense for 2 turns. If they get to 100% HP with the heal, though, this skill will also generate a 2-turn shield, the damage it absorbs half of the excessive heal. (Meaning if she heals for 10k HP and the monster is at full HP by 5000, the excessive heal is 5000 and will generate a 2500 damage shield.) However, Morris is a reviver. His passive, To Live or To Die, will have him roll 2 dice at the start of each turn, and if he gets the same number on them, he’ll revive all dead allies. The amount of HP the allies are revived with increases the higher the number is – so reviving everyone with 2 sixes rolled is more HP than reviving everyone with 2 ones. The Solution: Take out Emma first. Having defenses raised and sometimes even shields is no fun, and that’s minus her heal. Make sure you kill Morris on the way as well, because having everyone be revived is no good. If you can’t stun her, though, try to use someone with AoE healblock. Someone like Beth, for example, could be used for this round. I’m not saying that Beth is, like, the ONLY person who’s good here, but she does seem pretty optimal. …Actually, now that I think about it, having a Beth in general sounds great. I wish 99% of my nat5s weren’t wind. Not that I’d give up my Charlotte, though. After everyone’s dead, you can then move on to stage 2! 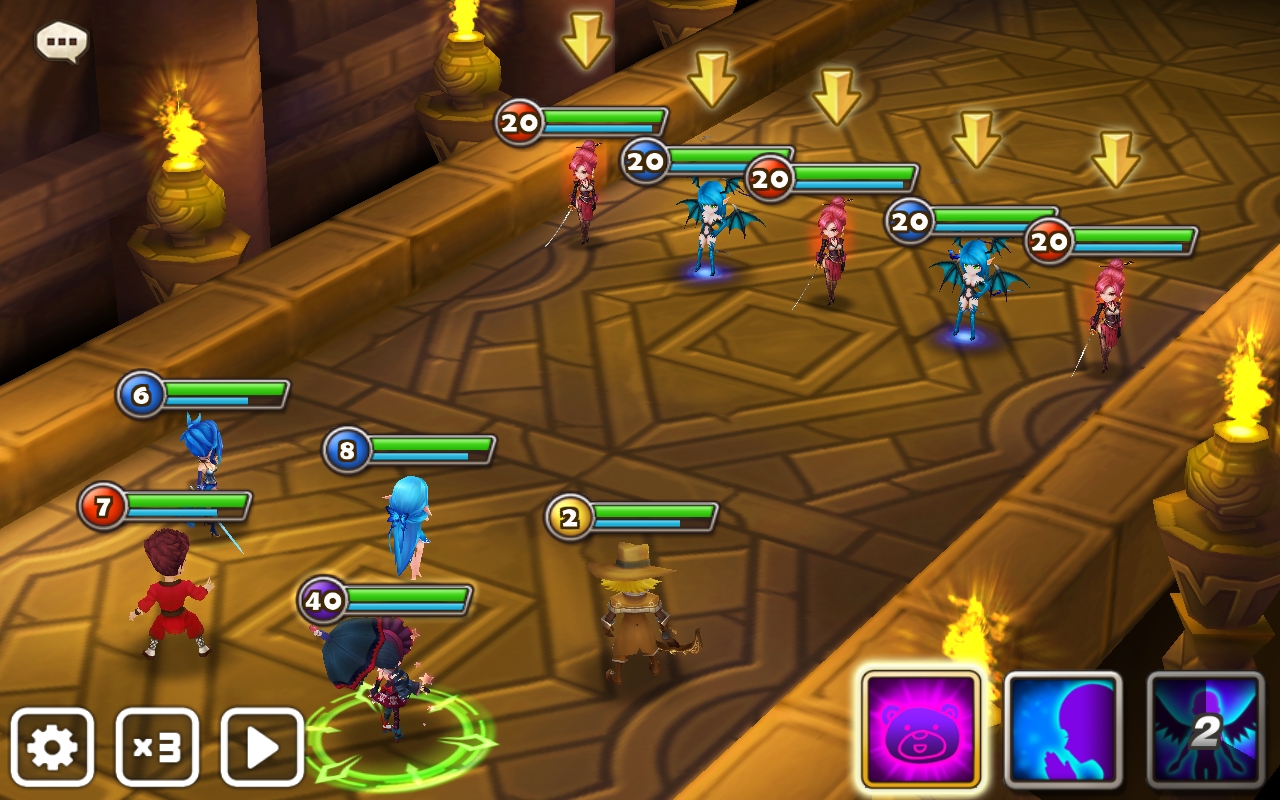 Here we go, people! Here, we have three Lisas (fire Neostone Agents) and two Izarias (water Succubi). The Threat: I’d probably say Lisa is the bigger threat here, support-wise. Did you know she’s one of the best cleansers for R5? It’s mostly because of her base stats (terrible defense but pretty decent HP) and her third skill, Attack Command, which cleanses all allies of harmful and inability effects and then selects three allies (including herself) to attack an enemy. The only reason why she couldn’t be better in Raids is because her AI sees this skill as an attack skill and not a cleansing skill, like with Mihyang’s Dance of Mirage. However, letting a cleanser like her through – even one where her cleansing skill is seen as an attacking skill in the AI’s eyes – in Hall of Heroes is a certain recipe for disaster. Izaria, meanwhile, has recently become a pretty good pick in RTA. I’m not sure how, but let’s talk about her and the main gimmick of the Succubi anyway. They’re mainly focused on the sleep debuff, where their first skill puts enemies to sleep and all their attacks don’t wake up any mons asleep, which is pretty cool, honestly. Izaria’s third skill, Parting Gift, will attack an enemy four times to heal herself by 50% of the damage given. She’ll also steal 15% of the enemy’s attack bar every hit, and put them to sleep for 2 turns if she drains their attack bar. The Solution: Stun Lisa first, all three of them, and then work on killing them all. The main priority of Hall of Heroes is eliminating anyone who can hinder your progress against the other targets, first-things-first. Once you’re done, you can work on Izaria. ANYway, once everyone’s dead, you can move on to stage 3, the miniboss! 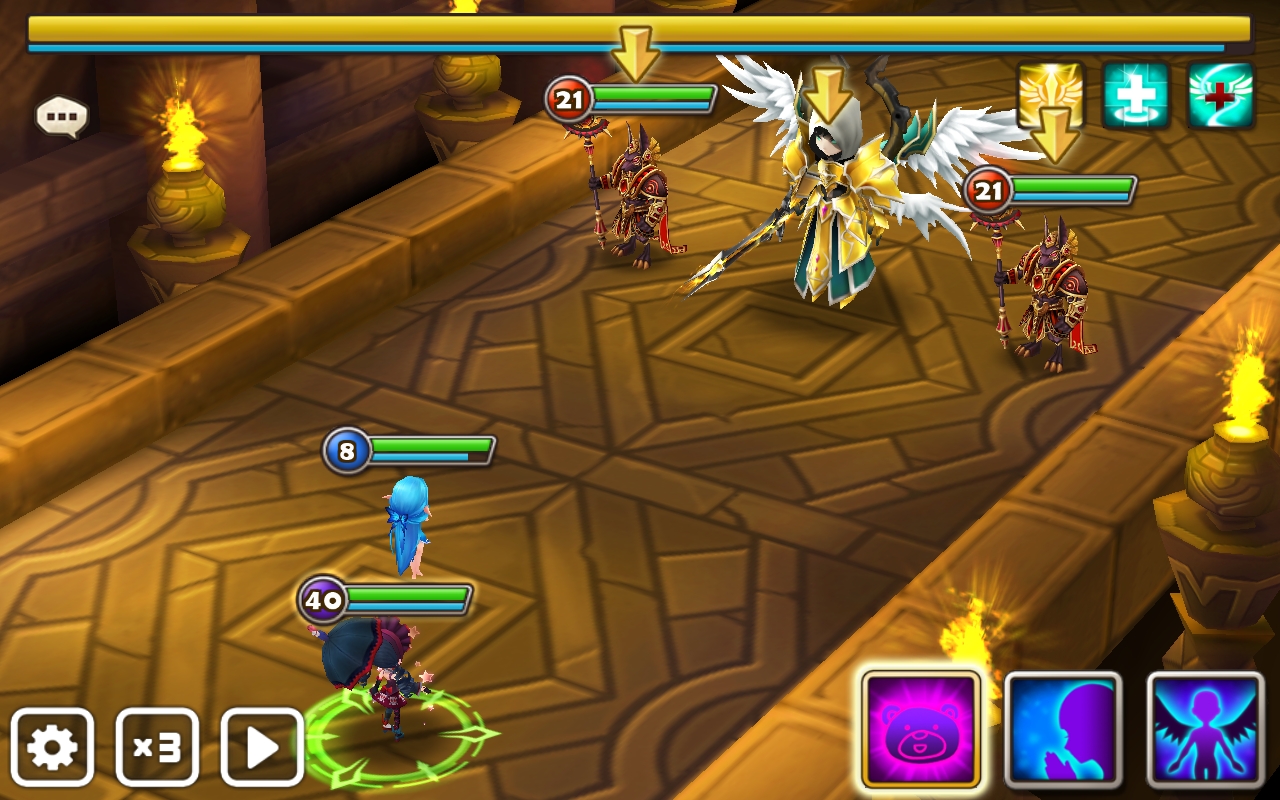 Miniboss time! Here, we have an Eladriel (wind Archangel) and two Khmuns (fire Anubises) The Threat: Honestly, no one here is a big “oh i’ma kill you, oh it’s comin, oh lawd it’s comin’” kind of threat. However, Eladriel himself is a big threat because of his ability to revive people. I actually have an Eladriel myself, and I can tell you he is a little underpowered, but his reviving skill is great. His third skill, Archangel’s Mercy, revives an ally for 100% of their HP, at the cost of his half of his current HP. That means if he has 2 HP, he’ll only lose 1 HP, and here’s another thing – the damage he takes can be cut down or even negated if you have a shield or invincibility on him. I do agree that his second skill Archangel’s Blessing is incredibly underpowered, though, and needs a buff or two. Khmun, meanwhile, is a great mon. His passive, Savior, will, at every turn, grant a 2-turn shield on the monster with the lowest HP ratio; meaning someone with 20% HP will get priority for over someone with 50% HP. This shield is equivalent to 20% of his max HP. The Solution: Kill Eladriel first. I always say to get the revivers out of the way first; well, you can especially do that here because the reviver here is also the miniboss. You don’t have to kill the lackeys in the boss or the miniboss stage, which is always good because of how annoying it was to have to kill everyone; meanwhile a reviver lackey could revive the boss and you’d have to fight them all over again. (I have a very distinct memory of this happening at some point, but I can’t remember with whom.) 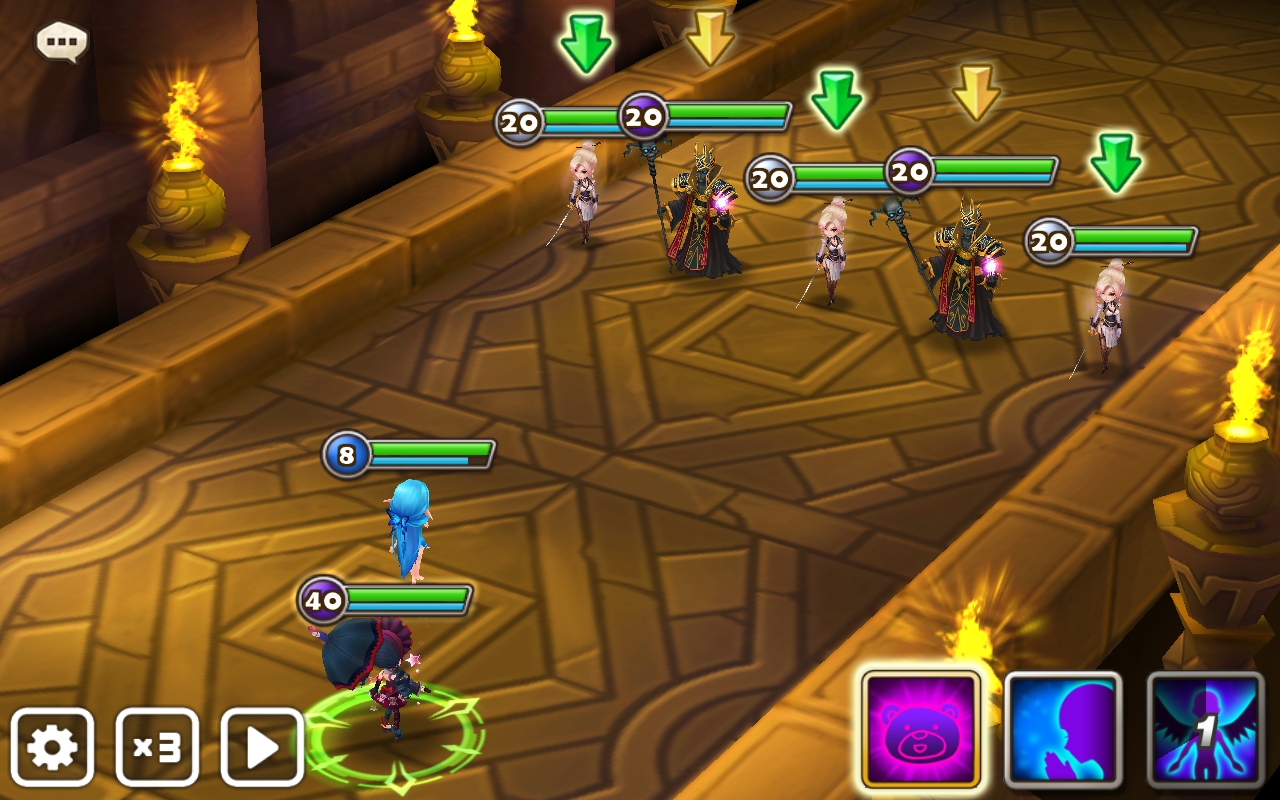 Only two more stages now before the boss! Here, we have three Illiannas (light Neostone Agents) and two Gregos (dark Liches). The Threat: Whoever the threat is, it’s definitely not Illianna. There’s a reason why she’s considered the worst of the Neostone Agents, and that’s mainly because of her third skill Neostone Field. She’ll protect all her allies will holy powers, turning one ally Invincible for 2 turns, while everyone else receives Endure for 1 turn. The problem is how high of a cooldown this has – 6 turns when fully skilled up. She’s also a Neostone Agent with the Briefing second skill, but that still doesn’t excuse her third skill. The real threat here is Grego. This dude here has a passive that decreases the damage he’s inflicted with by 50%. It also decreases the amount he can be healed by 50% at well, but when you think about it, that’s not really that bad; especially considering that his attack power will be increased by 50% every time an enemy or ally dies, and he can get this increase up to 5 times. The Solution: Take out Grego first. His passive, King of the Dead, will decrease the damage inflicted on him by 50%, and also increases his attack power by 50% every time someone on the battlefield dies (accumulated up to 5 times). Make sure you keep Illianna stunned, too; you don’t want her to be casting Neostone Field on everyone. 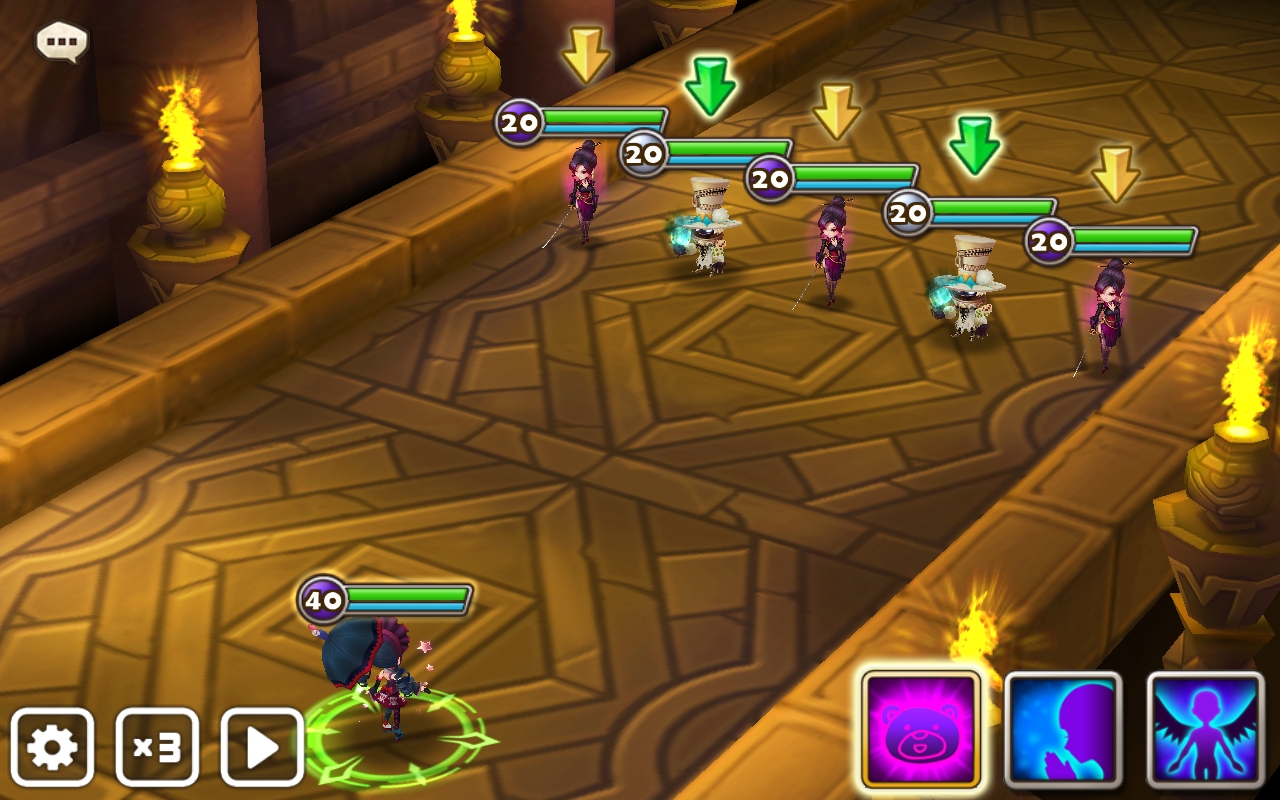 Last stage before the boss, people! Here we have three Sylvias (dark Neostone Agents) and two Tablos (light Dice Magicians). The Threat: The threat is definitely Sylvia. Did you know she’s the only Neostone Agent in the family who’s a nat5? She’s one for good reason; too – not only are her base stats and leader skill really good, her passive Best Partner will randomly select an ally to attack with her during her turn. In other words, she has the same mechanic as a Chakram Dancer and Boomerang Warrior, except she can choose anyone in the team; the nuker, healer, you name it. It also reduces the cooltime of the monster she chooses. Oh yeah, Tablo sucks too. His third skill, Returned Dice, will reset everyone’s attack bar to 0 – everyone, including his allies. However, he’ll increase the attack speed of all allies except himself for 1 turn, and also place an irresistible stun on himself for 1 turn too. It can’t be blocked by Immunity, either. The Solution: Kill Sylvia first things first. I hate Sylvia so friggin’ much. It’s even worse that she’s also a ToA boss (and usually a high-up one at that). Trust me, you do not want her pulling people along every friggin time she attacks. Don’t forget to stun Tablo while you’re at it, and when Sylvia’s dead, you can safely work on killing him. 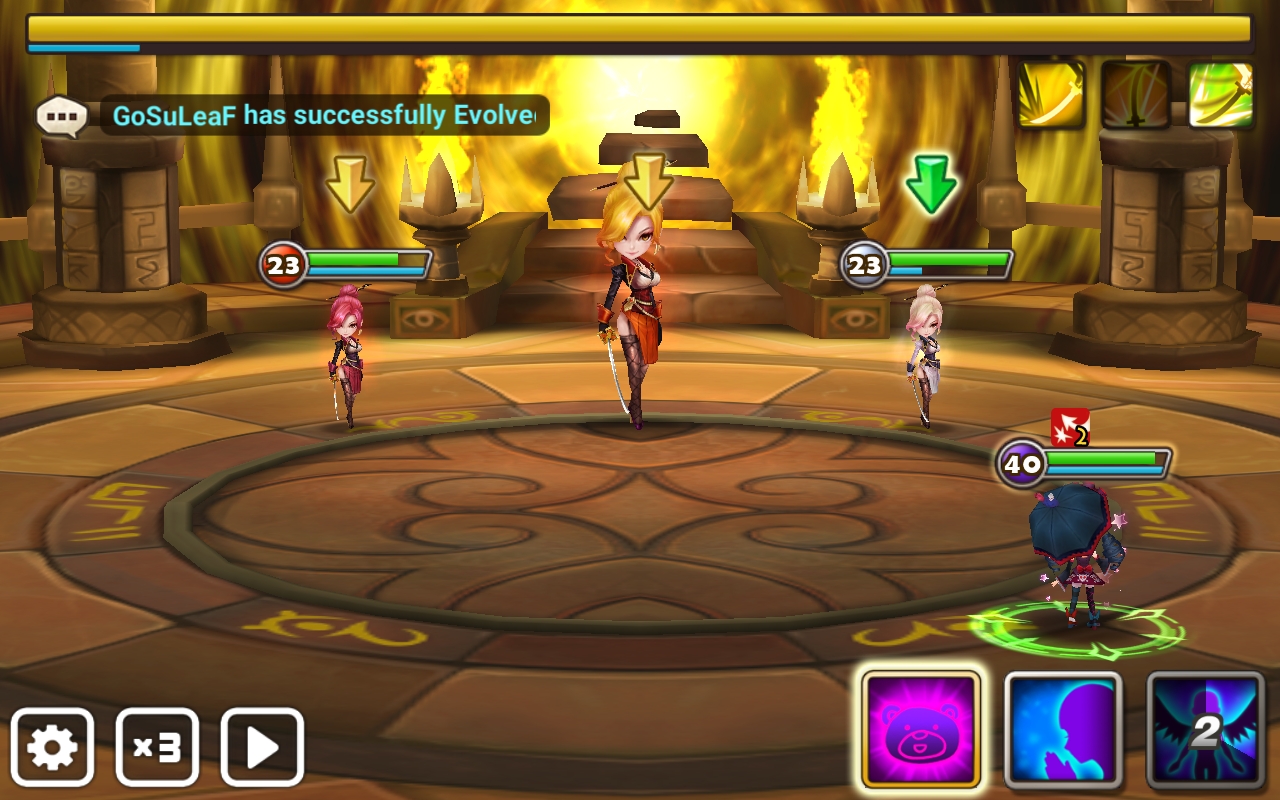 It’s time for the boss! Here, we have the most variety of all the stages because the lackeys always change elements. However, the boss of this HoH will always be your favorite ghoul girl Olivia. The Threat: Again, the threat always differs because of the lackeys and how they differ each stage. Any stage with Sylvia as a lackey is a stage that would be infinitely more deadly than a stage without Sylvia. (Why did they have to make her so rare…?) The Solution: Once more, the solution will differ because of the lackeys’ elements that differ. In this case, I’d stun both Lisa and Illianna, and just work on killing Olivia to end it all. Anyway, I hope you enjoyed this Hall of Heroes article! Stay tuned, though; we’re gonna have four more coming out; one for each option! Which choice did you pick? Tell me in the comments! I’m Sara Ann, and I’ll see you in the next (four) article(s)!]]>