He actually is a lot better nowadays, after his most recent buff. His passive makes him immune against inability effects, and decreases his chances of getting hit by a critical hit by 25%. If he gets hit by a hit that would’ve been a critical hit, but was not, because of his passive, then he’ll increase his attack and defense by 10%, and this accumulates up to five times. Overall, though, it is not worth it to build Rigel. Today, we start the Rigel Hall of Heroes; the final HoH article I need to write before I’m done! Here, we have three Antares’ (fire Liches) and two Tetras (water Mermaids) The Threat: Oh, it’s definitely Antares, after his latest buff. His passive, Transcendence, will have a 15% chance to give him a turn after the enemy’s turn ends. However, every time it doesn’t activate, the activation chance will go up and up until he does get a turn, in which case the chance will be reset. When he does get the turn, his attack power and critical rate will be increased for one turn. Tetra is more of a support monster, but that doesn’t mean she’s something to be scoffed at. Nowadays, she’s more of a mini-Molly. Her passive reduces the time of all harmful effects, minus inability effects, on her allies by 1 turn. She’ll also heal the enemy with the lowest HP status by 10% of her HP every turn. The Solution: Kill Antares first. He can’t go proc’ing his passive if he’s dead. However, if you can’t kill him immediately, I’d recommend bringing an Oblivion bringer, like Tesarion or Herne. Not only will they block his passive, but they can also block Tetra’s, so that she doesn’t heal or decrease the harmful effect time by that one turn. 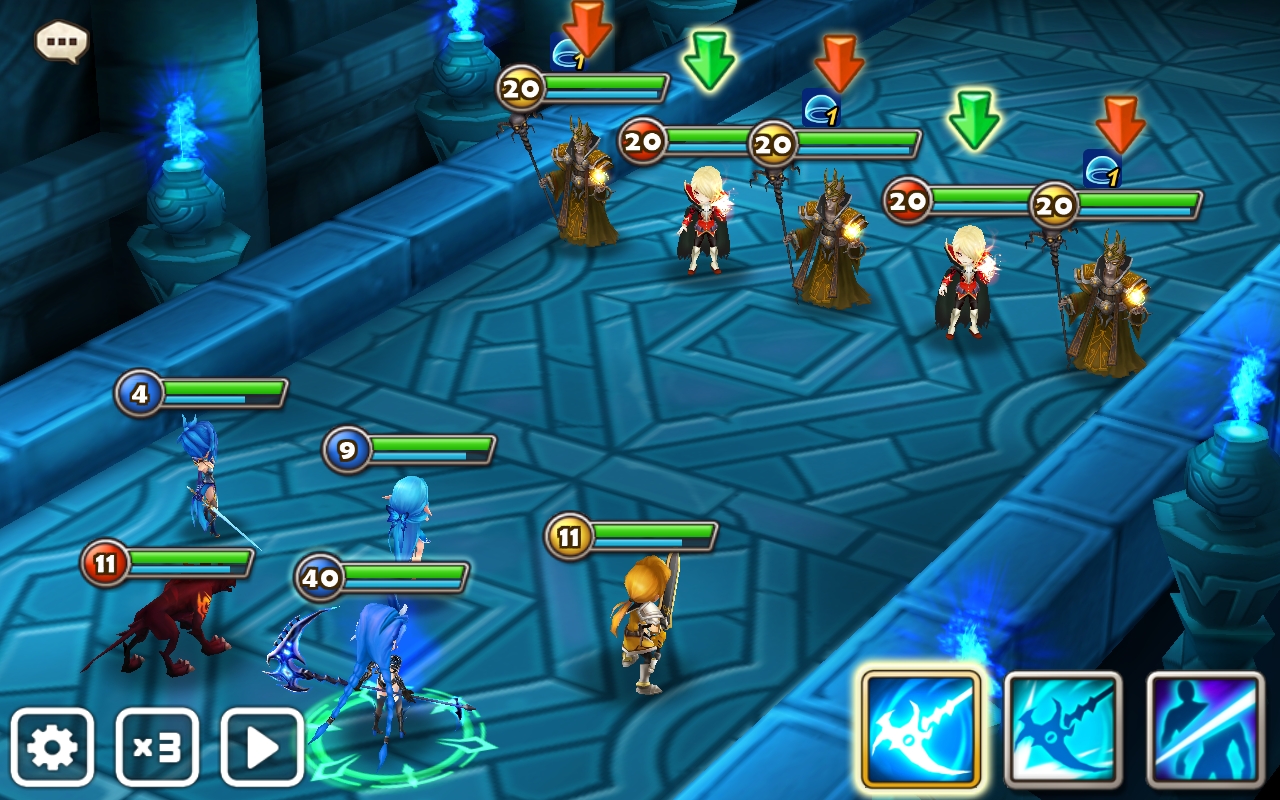 Stage 2! Here, we have three Fucos (wind Liches) and two Verdehiles (fire Vampires) The Threat: verde’s hot o3o ANY-way, I’m gonna go with Fuco being the bigger threat here. At the start of each turn, he’ll grant a shield proportionate to his level for 1 turn. He’ll also decrease the attack speed of everyone who attacks him with his shield up, also for 1 turn. He can pack quite a punch, so be careful. Verdehile, meanwhile, has the greatest passive to ever grace a four-star (minus Shaina’s): Boiling Blood. Every time an attack lands as a critical hit, he’ll increase his allies’ attack bar by 20%. Pair that up with the fact that his second skill Noble Agreement recently got buffed to hit twice instead of once, and we’re gonna have a lot of attack bar cycling on our hands. Did you know that Verdehile’s actually a meta pick right now in RTA? Apparently, the attack bar cycling is a good way to get rid of the provoke that Jeanne brings. The Solution: Kill the Verdehiles first. You do not want him to start cycling the attack bars of everyone, so that you can’t get your turn. Keep Fuco stunned in the meantime, and then when Verdehile’s dead, you can safely kill the Fucos without much worry. Now then, let’s go to the miniboss! 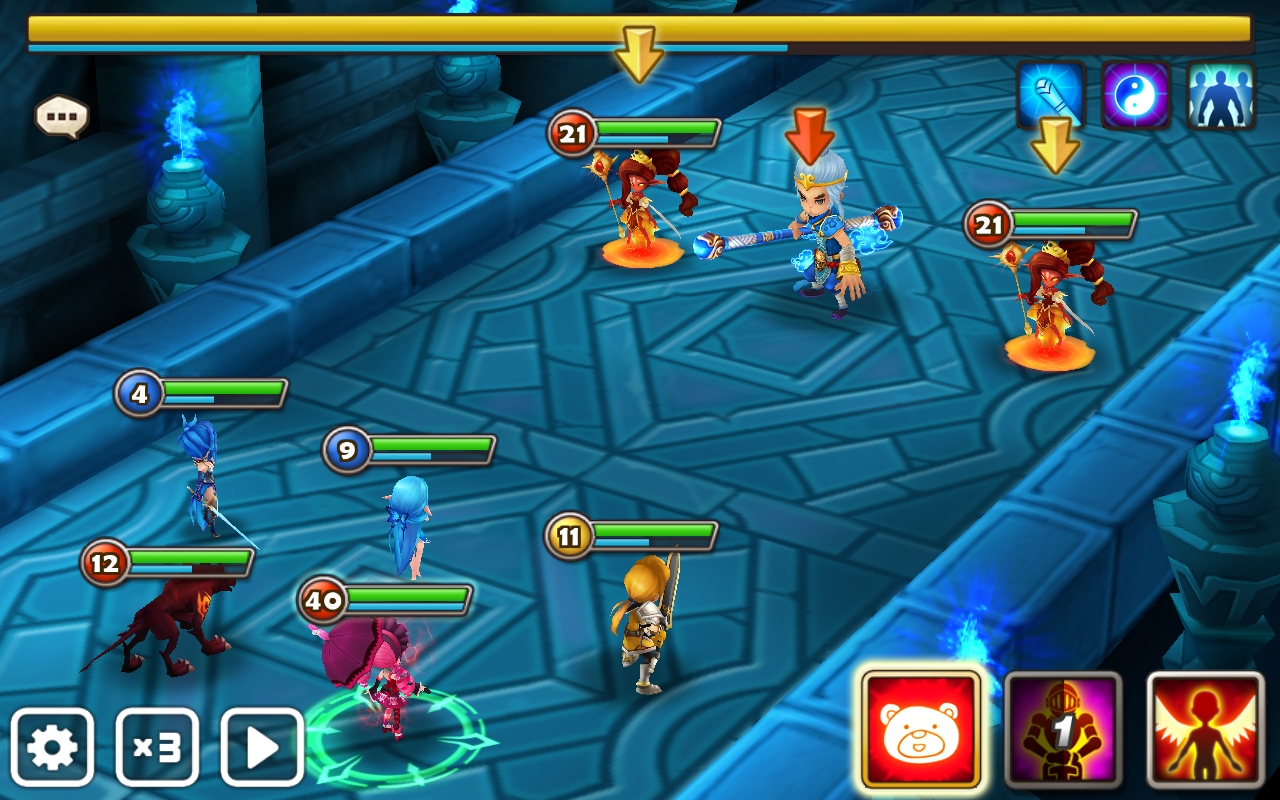 Here we go, it’s miniboss time! Here, we have a Shiu Hou (water Monkey King) and two Atenais (fire Undines) The Threat: The threat here is definitely Shi Hou. His third skill, Alter Ego Attack, attacks an enemy four times, removing a beneficial effect with each critical hit, and then grants himself Invincibility and Immunity for 2 turns. His second skill All or Nothing also attacks all enemies, stuns them for 2 turn, and increases his attack bar by 25% for each enemy stunned after this attack. Atenai is like a budget Chasun, meanwhile. I actually six-starred her a while back…and I deeply regret it. ANYway, her passive, Share Life, evens out the HP ratio of all her allies, and then heals them all by 25% of their Max HP. Her first skill, upon landing as a critical hit, will also grant attack break on the enemy she attacks for two turns. I’m told this makes her pretty good as a Tartarus Labyrinth monster, but I’m not sure yet. The Solution: Kill Shi Hou. You don’t need to kill the lackeys anymore in Hall fo Heroes bosses/minibosses, which is always good. Anyway, let’s move on to stage 4, shall we? Oh, lordy, here we go. This stage consists of three Halphases (light Liches) and two Hrungnirs (dark Barbaric Kings) The Threat: Halphas. Halphas has, like, the worst passive ever and I hate it so much. His passive, Endless Attachment, will grant him Invincibility for one turn when his HP drops before 50%. Here’s the thing, though: while he has Invincibility on him, he’ll steal 10% HP from each monster at the end of their turn, meaning he can easily heal himself back up to 100%. This skill doesn’t have a cooldown, either. And then there’s Hrungnir. His third skill, Frenzy: attacks an enemy target, instantly recovers another turn, has a 40% chance to be prevented from going on cooldown, AND when this attack is on cooldown, his attack speed increases greatly and he’ll heal himself for 10% of his HP at the start of every turn until it’s back off the cooldown. Yeah. The Solution: Bring a healblocker for Halphas. If you can, bring along someone who can just 100% block beneficial effects, like Megan. This would prevent him from getting his Invincibility up, while the healblocker would keep him from healing himself with Invincibility up anyway. Make sure to keep Hrungnir stunned while you work on Halphas, though. 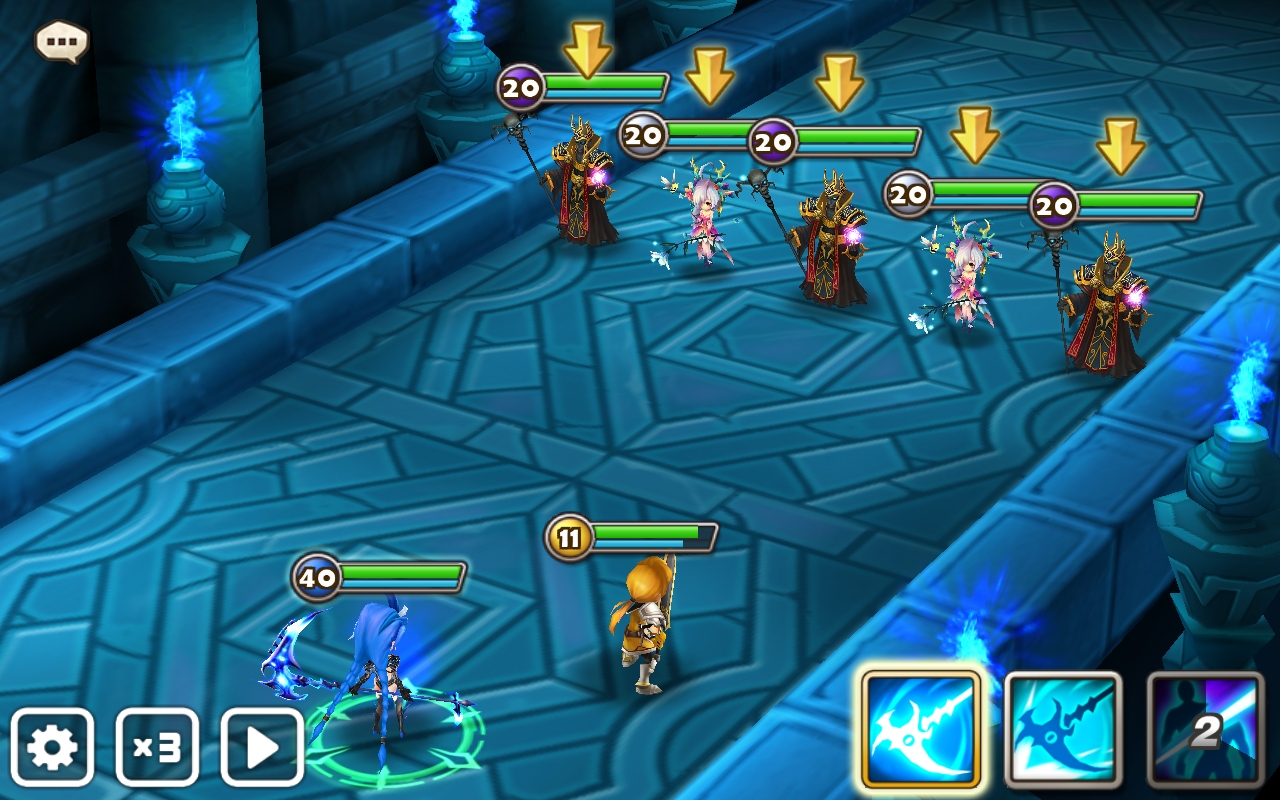 Alright, last stage before the boss! Here, we have three Gregos (dark Liches) and two Fellerias (light Dryads) The Threat: The damage dealer is Grego. This dude here has a passive that decreases the damage he’s inflicted with by 50%. It also decreases the amount he can be healed by 50% at well, but when you think about it, that’s not really that bad; especially considering that his attack power will be increased by 50% every time an enemy or ally dies, and he can get this increase up to 5 times. However, you should be careful of Felleria, too. First, she has the second skill Honey Bee Friends – which removes all harmful effects off her allies and places them all on an enemy. However, if no one has any harmful effects on them, she’ll instead heal everyone by 10%. Her passive, Deep-Rooted Tree, is the best part about her, though. She’ll heal everyone with harmful effects on them for 10% of their HP every turn. However, allies with no harmful effects get a 2-turn shield that’s equivalent to 10% of Felleria’s max HP. The Solution: Kill Grego first. King of the Dead will stack pretty hard if you go for Felleria first, so you need to get rid of all three Gregos first things first. Felleria will be placing shields and healing them, but that doesn’t matter, because Grego cuts the healing he gets in half. Once they’re all dead, you can work on Felleria, and once those are all dead, you can go on to the boss stage! Here we go! This stage has the most variety of all the stages, because even though the boss is always Rigel, the lackeys are gonna differ in element during every stage. The Threat: The threat will differ because the lackeys always differ. The Solution: Again, there’s no do-this-this-and-that for the boss stage because the lackeys are going to be different per stage. Anyway, I hope you enjoyed this Hall of Heroes article! Which choice did you pick? Tell me in the comments! I’m Sara Ann, and I’ll see you in the next (four) article(s)!  ]]>