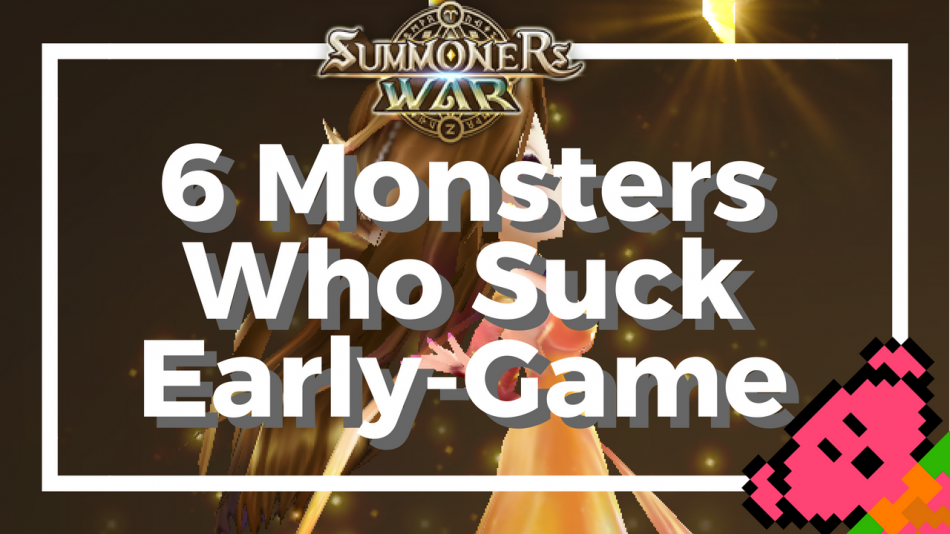 <![CDATA[Of course, everyone loves it when they pull a nat5! After all, it’s a true showing of the luck that blessed you in that one, adrenaline filled moment of lightning skittering from the Summoning Circle! …Problem is, when you’re early game, some monsters just aren’t good at your level. You have no idea what to do with them and so you think “oh, this monster is garbage” Well, let me tell you that those monsters are <em>not, in fact, garbage. They’re great once you’re late-game. In this list I’m going to talk about the monsters that early-game players commonly think sucks. Disclaimer: I’m not including any light or dark natural 5 stars in this list, as then this would be way too long.

This is probably a controversial opinion, but hear me out. Pretty much everyone on the face of the earth loves Perna. What’s not to love? His passive skill heals everyone on the team for 10% each turn, and on the moment of death, he’ll rise from the ashes at 100% HP, meaning he basically just fully revived himself! Sounds like he’s great in GB10, right? …Wrong. He’s a fire element. I mean, you can use him in GB10; I’ve seen a few speed teams use him, but you need to have high rune quality. Perna also really shines in the Arena, which I doubt you’ll be doing if you’re early to mid-game. Sadly, you’ll just have to put him in storage for later, because once you do hit the point where you could use him, you’ll be happy you didn’t feed him away or something. In late-game, though, it rusn out Perna is good in arena and guild wars. There’s a reason why Perna, Theomars and Chasun or something like that is so popular as a Guild War defense. (Pro-tip: It’s because Perna heals everyone, and if runed on Violent runes, will proc one of your monsters to death.)

So I can actually speak from experience for Leo. I got him on my early-game alt – and by early-game, I mean “can’t even GB6 yet and is only level 15” early-game. He’s got a unique passive, Eye of the Storm, which limits everyone’s attack speed to his own speed at the time – meaning if he has 150 speed, that 300 speed Frigate will be cut down to 150 speed. His passive also lets him decrease attack bars by 10% per hit, but other than that there’s no way to use Leo early-game. You can’t take him GB10 because his passive is worthless there (minus the 10% attack bar reduction), in DB10 he has an elemental disadvantage and if you think about taking him to NB10, that’s literally the stupidest thing you can do with a Leo. When he gets to arena, though, is where he shines. Team comps like Leo, Megan, Lushen, Lushen are extremely popular because with Leo’s passive, it guarantees you get the first turn. As long as the enemy monsters aren’t on Will, you can also reduce their attack bars by 10% and cut them off from getting their turn, messing up the turn order.

Jamire was the first monster who could completely refresh the cooldowns of all allies. You would think that he could be used pretty much everywhere, right? Wrong. In starter GB10 teams, your priority is survival; Veromos usually does most of the damage because of the DoTs he applies to the boss. Jamire refreshing cooldowns isn’t going to do much in starter GB10. DB10 is out of the question with Jamire, because, you know, wind against fire. I suppose he can work in NB10, if you rune him on Violent and all that, but I honestly wouldn’t recommend it. However, he shines in – you guessed it – Arena and Guild Wars – and Raids, surprisingly. Now Jamire can cleanse all harmful effects off of his allies by using Illusion of Time along with refreshing everyone’s cooldown. This also makes him really good in Chloe + Katarina comps; Chloe would buff everyone, Katarina would use her third skill, and then Jamire uses his third skill, meaning that Chloe can make everyone Invincible again.

For a while, Mo Long was thought to be a horrible panda, and then all of a sudden he was loved by all. I’m not too sure how this happened, but it just did somehow. I think it was because of the birth of RTA. Anyway, Mo Long is great. I want one, he’s a panda, I like pandas, buuuut unfortunately he’s only good in the thing early-game players despise the most: PvP. His third skill, Reckless Assault, attacks an enemy for 70% of their Max HP. The catch is, however, is that Mo Long will be damaged by that same amount. He cannot be killed by the damage (even if he’s at 10% of his HP and 70% of the enemy’s HP is 20% of his, he won’t go below 1 HP) and the damage will go from 70% to 15% for boss enemies, like the GB10 giant, DB10 dragon, etc. So obviously, he sucks in PvE, but once you enter PvE you can just throw him in with a Chloe so he doesn’t lost any HP, and you’re good to go!

Isn’t it weird that the fire Sea Emperor is the best? It’s almost as weird as the water Mermaid being the worst of her sisters. Anyway, Okeanos is noted for his third skill. He attacks enemies multiple times with flaming stones and each attack has a 25% chance to stun the enemies. With each stun, he recovers his attack bar by 25%. He doesn’t need Despair runes to stun, so everyone runs him on Violent runes. Despite him being really good, he’s not good in GB10, DB10 or NB10. It’s mainly because at the boss stage,, bosses can’t get stunned – even if the trash waves can, but you’re not focused on stunning them. You’re focused on killing them. However, in the arena, Okeanos is great against monsters without Immunity; not to mention he has quite a bit of potential in Trial of Ascension, thanks to his ability to stun so much without Despair.

I swear to god, putting Tiana into a GB10 team is the number one way to create a team that fails 100% of the time. Tiana is an interesting specimen, that’s for sure. Her third skill, Wind of Changes, will remove the beneficial and harmful effects off of everyone in the screen; both allies and enemies. That means the attack buff Galleon cast on the allies and the DoTs Lanett provided on the enemies will be gone with Wind of Changes. Think of it like a fresh start. With that in mind, you can bet that includes in PvE environments. If you were to take Tiana in GB10, I will guarantee she cleanses the defense break off the GB10 boss and the speed buff off of your team. And you’re gonna die. No buts about it, pal. Tiana is the ultimate “put this mon in storage until late-game” monster. Of course, when you do hit late-game, then she becomes pretty much your most wanted monster. She strips the buffs off of all enemies, ignoring their resistance and Immunity effects. Basically, if you go against a Shield/Will comp, Tiana will take the Shield effect and Immunity off of all enemies, so that Galleon can land the loots and life will be good for you. I hope you enjoy this article, because I certainly enjoyed writing it! I’m Sara Ann, and I’ll see you in the next article!]]>