<![CDATA[Yo! I’m sure you’ve read the title…hopefully. Let me get you a tad informed. But first a very sad tale to set the mood. Once there was a man…or woman or whatever they identify as in 2017. That person, like me and you, got hooked to this god forsaken game, but alas was having a crisis and decided to take it up in chat. “WHY IS 6 STARRING SO HARD??”, he wrote. Noticing this, I immediately replied, “6 starring is not hard just tedious…” to try and calm him down. THEN SUDDENLY, in that very moment, that person summoned…a fake nat 5. And thus, all of chat gave their prayers that day. THE END! Now for my full input on this “6 starring is hard” matter. Allow me to make it simple. <h3>Simple Now once again, 6 starring is not hard, just tedious. The actual hard part about 6 starring a unit is choosing which to 6 star. I’m not even going there… Anyways, here’s how the 6 starring process goes. I’m aware that everyone knows how to 6 star, but bear with me. First: MAXED 5 STAR 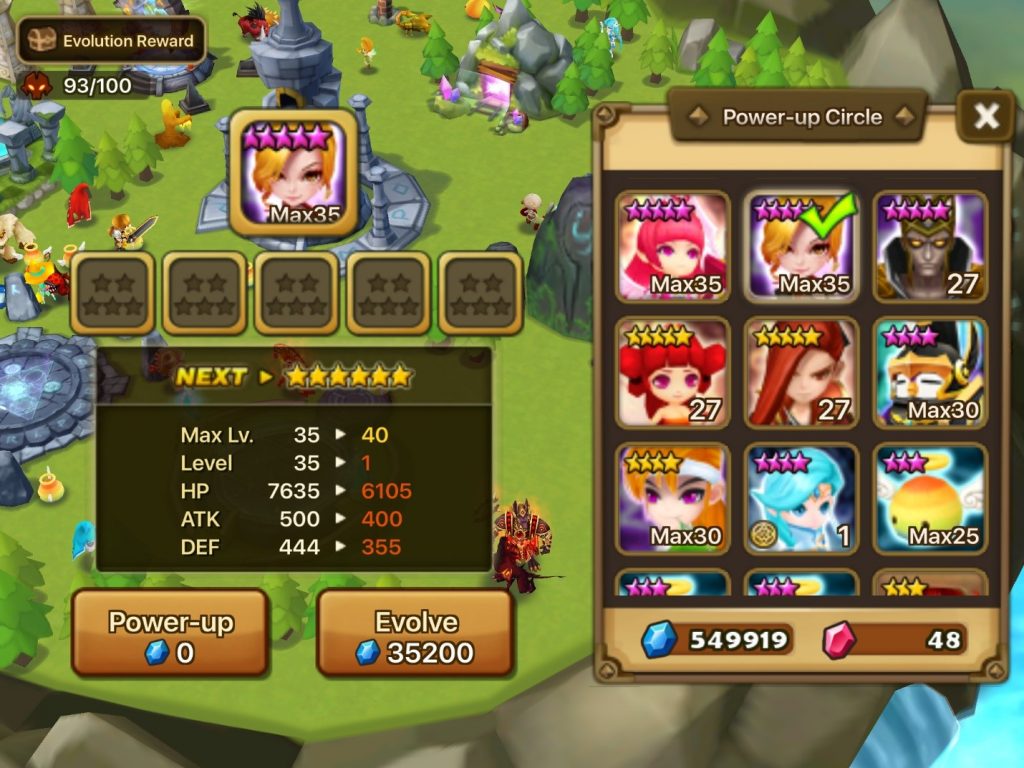 You’ll need one maxed 5 star mon that you want 6 starred and will continue to play with after doing so…or immediately regret 6 starring it and place it in storage until it possibly gets buffed (even though the chances of that happening are slim to none). Next: 5 STARS 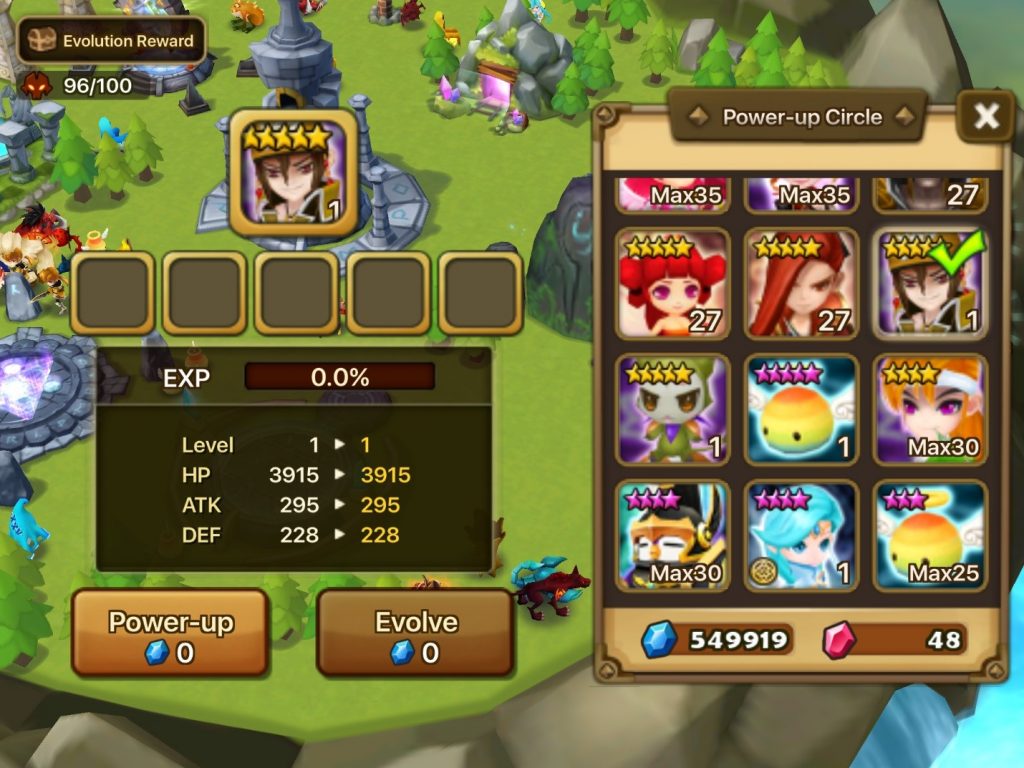 A maxed 5 star requires five 5 star mons, either maxed (I don’t recommend using a maxed unless you are very desperate) or not maxed. These five star units are usually evolved from maxed 4 starred units, and those units are usually rainbowmons. 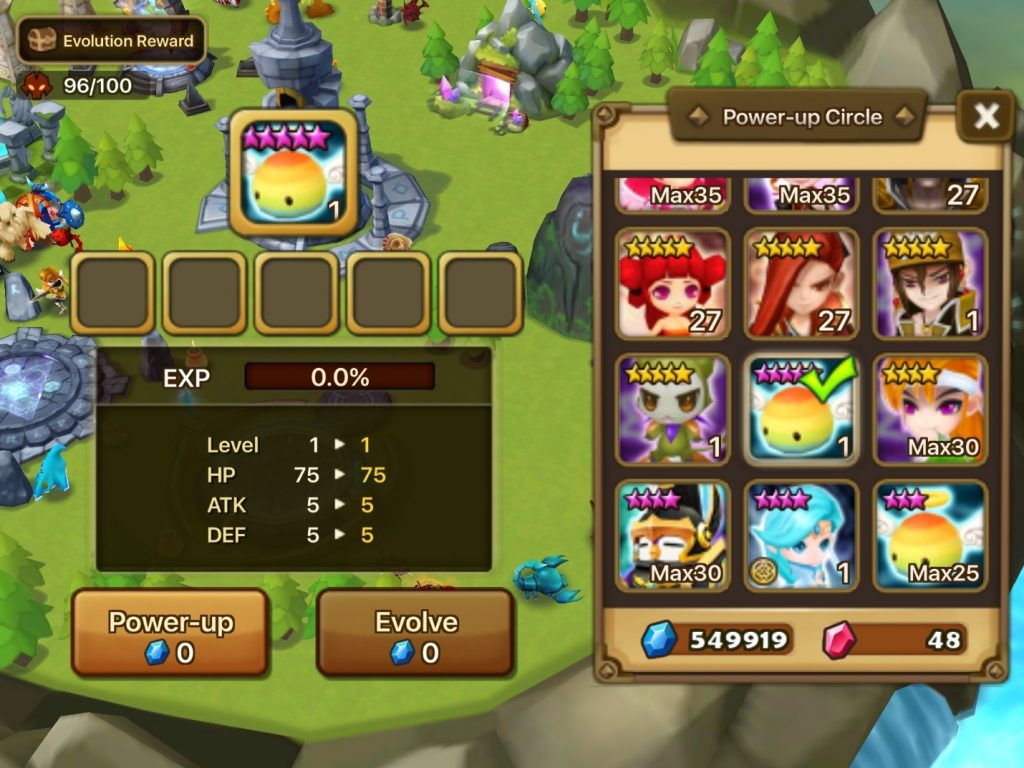 Rainbowmons are not required for the overall proves, but they definitely help save some time. If…You are going to make five 5 star mons out of maxed 4 star mons, you will need five maxed 4 star mons and twenty 4 star mons to evolve the maxed 4 star mons…that was one heck of a mouthful. I’m very sorry. I included pictures below though so no worries! When…You realize you don’t have twenty 4 star mons just lying around in your inventory nor your storage, don’t panic. I have a solution! Use 3 stars. 3 stars are easier to come by in this game, especially when you’re hoping for a nat 5…ha…haha…anyways…Level up and max twenty 3 stars. The catch now is you need sixty 3 stars to evolve those maxed 3 stars. Now… 3 star units are easier to come by compared to 4 stars but they are not abundant, especially if you are F2P (Free to Play). Soooo, making 3 stars is one alternative that can make ends meet, and for that to work out for ya is maxing out sixty 2 stars and evolving those with one hundred twenty 2 stars. You can…Go a bit further and integrate 1 star units into this process, but I don’t recommend it. That would probably take more time than you’d like. If you do decide to go for it, the more power to ya…you poor poor unfortunate soul. You’ll need one hundred twenty maxed 1 stars and two hundred forty 1 stars to evolve them. GODSPEED POOR SOUL. Great! With all that said and done, here’s all I’ve basically said…BUT WITH PICTURES…ORGANIZED! Specially made for all the TL;DR (too long; didn’t read) and TL;JS (too long; just skimmed) folk; my people unfortunately… If you have this you’re golden! 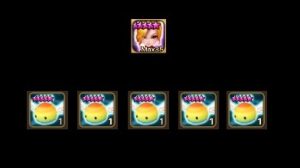 If you have this, you’re silver! 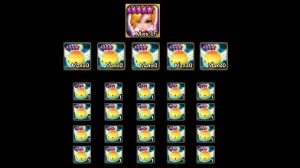 If you have this, you’re bronze! 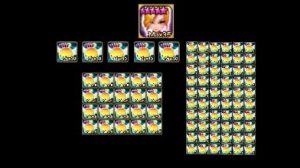 If you have this, I’m so sorry…I’ve been there and still am. \o/ 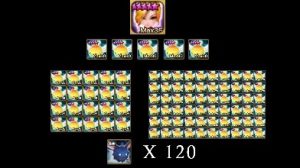 If you have this…what have you done to yourself??? 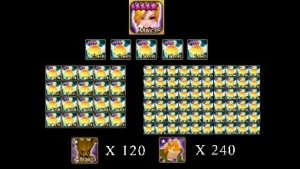 That’s pretty much the gist of it. Now that your goal(s) is/are set, let’s go about achieving them. First, what you’ll need. Fodder. Exp Booster. Gems.

The number one obstacle that makes this entire process overly tedious is acquiring fodder. Depending on the star grade, you’ll need either a few inconvenient units or multiple convenient units. Either way, you’ll be sighing throughout.

THE monster chosen to advance to its FINAL FORM…you’re on your own on this one, hehe.

Natural or fake, either will make 6 starring faster. You can acquire them from the following: Mysticals – It’s possible, but don’t count on it. Elementals – Basically, mystical scrolls…but with elemental colors. Again, it’s possible, but don’t count on it. Legendary Scroll – Pray? Summoning Stones – Give it a couple of months to years, it might happen. Temple of Wishes – HAHAHAHAHAHAHAAH!! Oh brother. Such a good joke…ahem. Sorry. In your dreams maybe? *NOTE – 5 stars, natural or fake are rarely used as evolution material, especially if you’re F2P. Natural 5 stars are complained for on a daily basis. It’s like a viral disease that has spread into the optimistic minds of all players who stick with this game. BEWARE IT’S CONTAGIOUS!!! Fake natural 5 stars, however, are more likely to be used as evolution material because players expect a natural 5 star when they see 5 stars appear, but get an awakened 4 star instead. Fake natural 5 stars can definitely be keepers, however. If you summoned an awakened Chasun, Orion, Galleon, etc, you wouldn’t complain…well I mean you would because it’s either not a natural 5 star or Com2us trolled the heck out of you since you already have them…so GZ/RIP.

If you don’t have 5 star units readily at your disposal, then why not make them eh? If you decide to make them, you’ll need maxed 4 stars. Besides maxing a 4 star yourself, you can get them through the following. Cairos Dungeon: Giants – RARE! Dragons – RARE! Necro – RARE! Hall of Magic – RARE! Hall of Elements – RARE! Tower of Ascension: Complete FLOOR 60 on NORMAL and HARD mode and you got yourself TWO. Guild Shop: Costs 150 guild points for ONE every week. 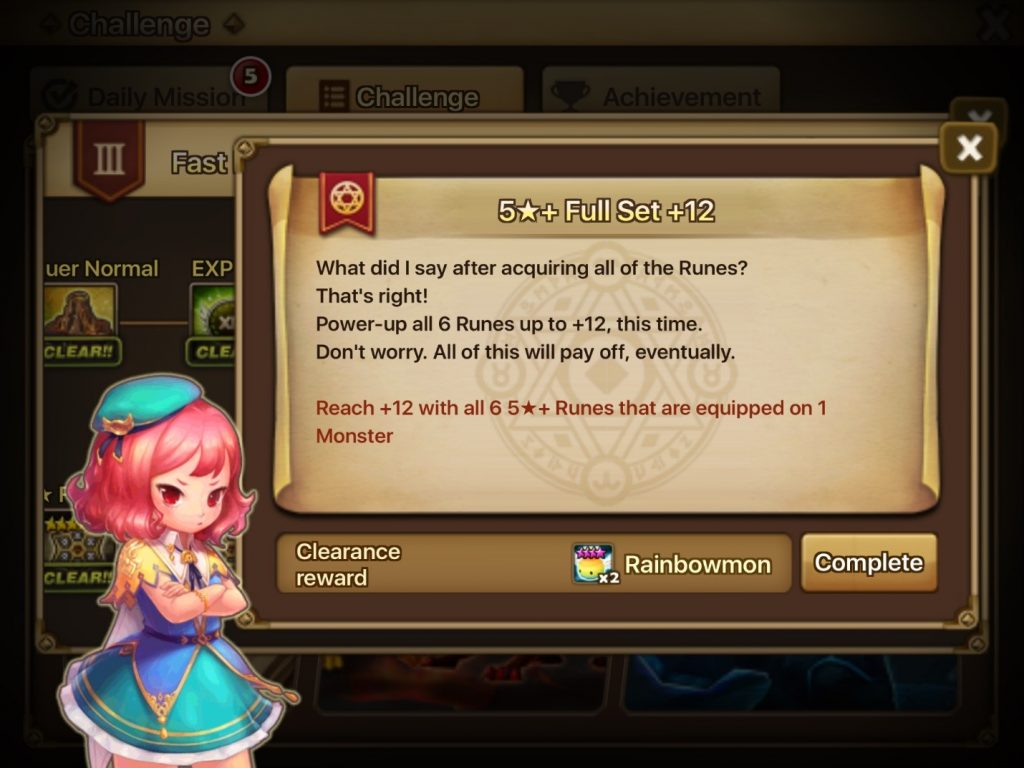 Reina Missions: I still can’t stand that girl…Most of us have been playing for months to years and she has the AUDACITY to call us NOOBS? No matter. A total of FIVE are obtainable if her missions are complete.

Besides evolving max 3 stars yourself, you can acquire these with the following: Mysticals –  REJOICE, when you see sparks. Elementals – Same as my mystical, but with ELEMENTAL PRECISION! Legendary Scroll – You are definitely getting one. You can’ convince me otherwise! HAHAHAHAHA! Summoning Stones – When those sparks appear, you already know you’re getting one. Don’t bother hoping for anything higher. You’re more than likely to be disappointed. Temple of Wishes – Maybe in someone else’s dreams. Hall of Heroes (HOH) – You can obtain 5, but summon 10(MAX) with almighty pieces bought from the guild shop, if you’ve prepared them beforehand. *50 summoning pieces for one summon *25 summoning pieces from each stage (10 stages in total) *NOTE – Some 4 stars are valuable on their own right, like a Verdehile, Lushen, Delphoi, etc, are valuable as skillups, or are valuable as potential max 4 stars.

Besides maxing 3 stars yourself, you can acquire these through the following: Cairos Dungeon: Giants – RARE Dragons – RARE Necro – RARE Hall of Magic – RARE Hall of Elements – RARE Reina Missions: 9 in total Tower of Ascension: Complete FLOOR 20 on NORMAL and HARD mode and you got yourself TWO. Scenario? – I can’t remember if I randomly got one here or not…If I did then getting it here is so rare you won’t even recall getting one. DON’T MAKE IT YOUR MISSION TO FARM THEM HERE!! Seriously…don’t. If you happen to find one, good job.

The poor souls who plan to use these for 6 starring can find them from the following: Unknowns – Common Socials – Common Scenario (excluding Mt. White Ragon, Faimon Volcano + everything after) – Uncommon GODSPEED POOR UNFORTUNATE SOULS!

Save. Your. Gems. They are absolutely essential for faster progress in general. I know premium packs are tempting, HOWEVER, this game does not just run on summoning new units alone. “Farming” about sums it up to be honest. For 6 starring, gems will be used for energy refills (for leveling), magic shop resets (for fodder), exp boosters (for leveling), and premium packs (ONLY if you’re desperate for fodder AND can afford losing 650 gems per pack). Simple eh?

Exp Boosters double the total exp earned from after defeating enemies. It makes leveling units faster and easier. You can buy one for a day for 100 gems or for 3 days for 200 gems, but you’re NOT REQUIRED to buy one. There are other ways to earn them, like from evolution rewards. Be careful when activating it. You want to utilize it for up to its MAXIMUM use. Hmmm…welp, that’s all for now. DON’T forget to check events, be well and happy 6 starring! Hehe.]]>