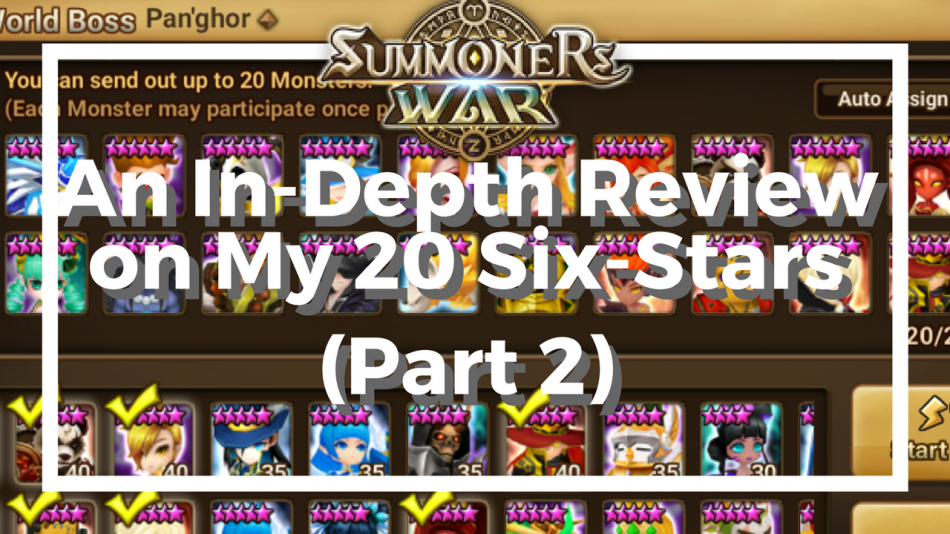 You’ve read Part 1 of my in-depth review of my 20 six-stars, meaning we’ve come to the last ten. I know I said in my last article that the next one would be about building Mihyang, but I still need some time to assess my opinion of her, six star her, and whatnot. So for now, we’re going to talk about my already existing six-stars, and we’ll start with… 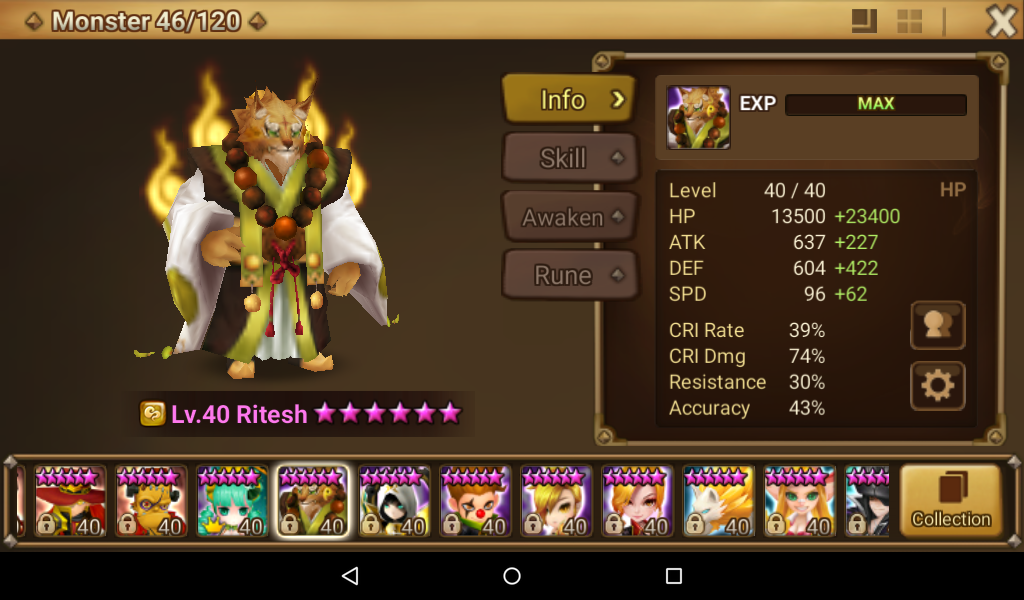 So as it turns out, I really dislike Ritesh, and I don’t even know why. He was my second Nat5, and I’d been on the fence on six-starring him for a long time now. Heck, the only reason why he’s one of my six-stars today is because my friend basically nagged me to six-star him, saying “trust me, he gets better once you six-star him!”

Turns out I’m still stumped on where to use Ritesh.

On paper, his kit’s really nice – I mean, first skill provoke, major heals on second skill, and an AoE defense break on his third skill. What’s not to love about him? I’ve seen a lot of love for Ritesh on the various Summoner’s War forums out there, and I honestly don’t get why they like him so much. I’m told he’s mainly an arena and Guild War mon, which is probably why I don’t like him so much because I have no idea what comps to use with him.

Later on, at say my 40 six-star accomplishment, I’m probably going to re-review all of these mons and maybe then I’ll have something more positive to say about Ritesh. By all means, do build him if you’re ready for Guild Wars, but for now I’m just going to be confused on using Ritesh. 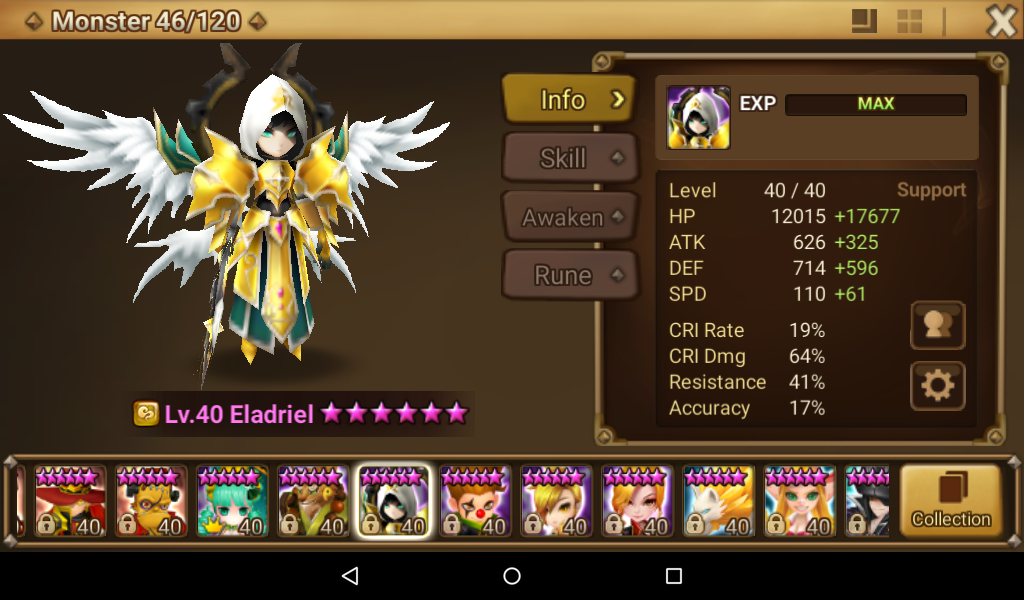 Now this guy I really like. He was my third nat5, and currently one of two revivers I own.

He’s best known for his third skill, Archangel’s Mercy. He’ll revive an ally with 100% HP, at the cost of half of his current HP. Thankfully, he’s also paired with Archangel’s Blessing (where he heals an ally by 50% of their Max HP), so rune him up on Violent runes so that he can proc a lot of additional turns, especially whenever he revives someone. 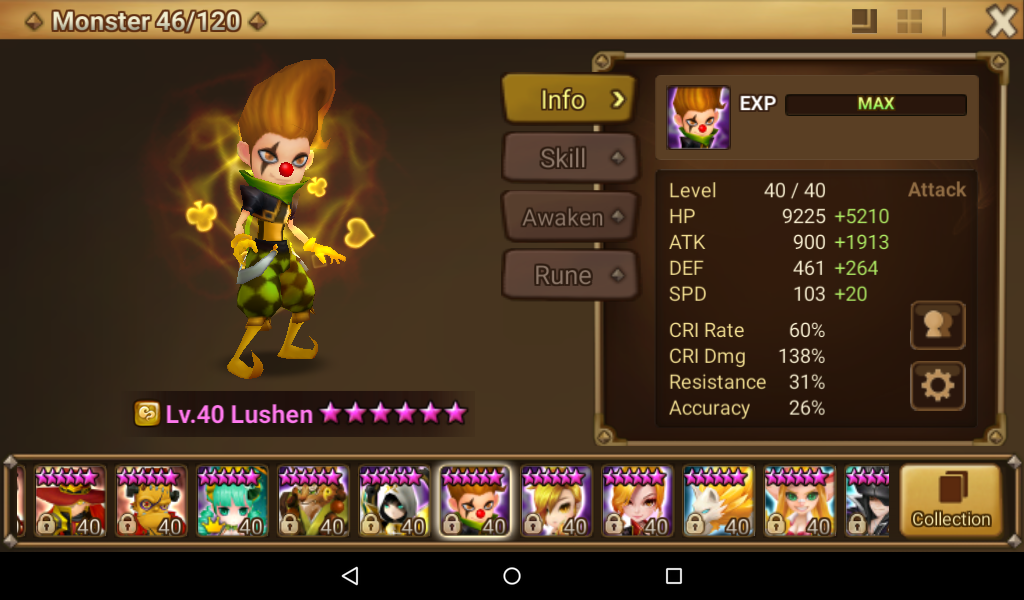 There’s a reason why everyone loves Lushen. That reason is his amazing third skill, Amputation Magic. It’ll attack everyone three times, each attack ignoring their Defense – that means that they’ll be attacked as if their defense stat was a fat 0; doesn’t matter if they have the highest defense in the game.

Lushen’s also a top pick for speed GB10 teams, because of his high attack power, two AoE skills, and (of course) Amputation Magic. He’s also a wind monster, and wind prospers against water – GB10 being a water dungeon. I begged for a Lushen for a few weeks and now I don’t regret getting him one little bit. 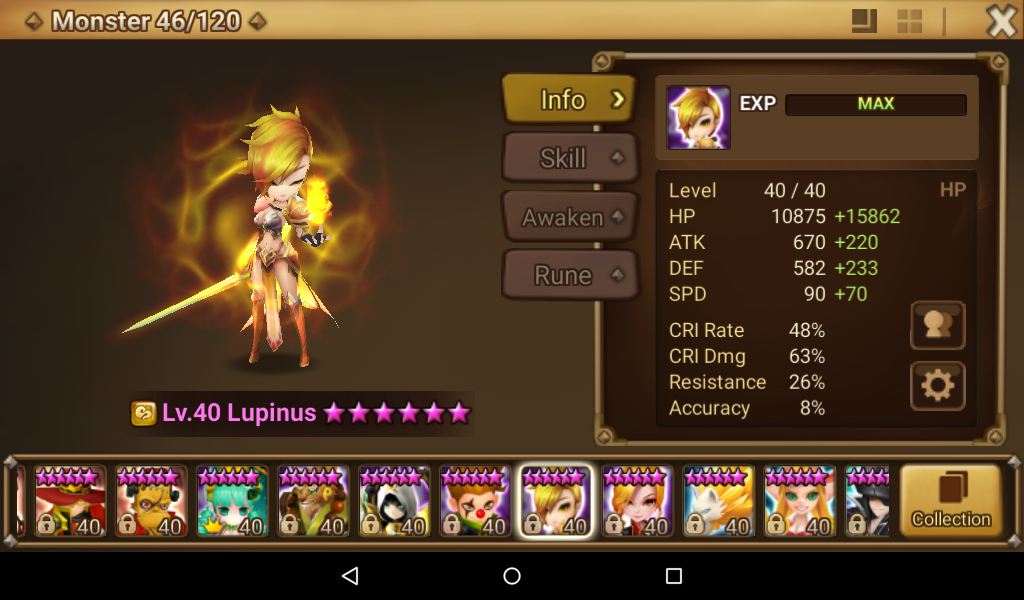 Not even Lupinus is amused in the picture. She’s a pretty niche monster, and the only reason why I six-starred her was because I needed the extra stats. Lupinus was a Hall of Heroes monster, and is pretty much a budget Charlotte.

Currently, I’m using her in NB10 as a shield breaker. All three of her skills are multihits, and I have her on Violent runes so that she can get more chances to get more hits on his shield. I’ve got her on a tanky build, Other than that, I don’t know where else you could use her. 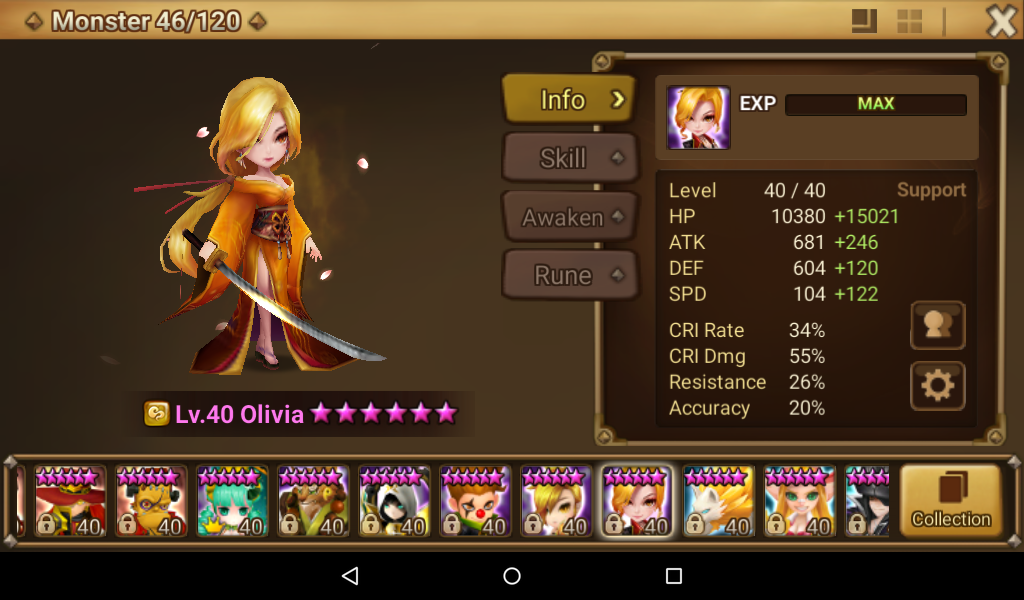 My only complaint about Olivia is that she needs skillups to shine, but when she gets them, you’re in for a wild ride with her! With Briefing at two turns when skilled up (keep in mind that it removes all harmful effects off of an ally and fills up their attack bar to the max) and Lock Down at three (she attacks one enemy twice, decreasing their attack bar by 25% per hit, and increases all allies’ defenses for three turns), there’s no doubt as to why she’s good.

I pretty much only use her in Guild Wars; my team usually consists of Olivia (L), Randy, Bulldozer, or Olivia (L), Copper, Bulldozer. She’s great for defense-based teams, like the two that I use pretty much 24/7. Olivia’s nice, but I hear Imesety is better. I do not know this because I do not have an Imesety. 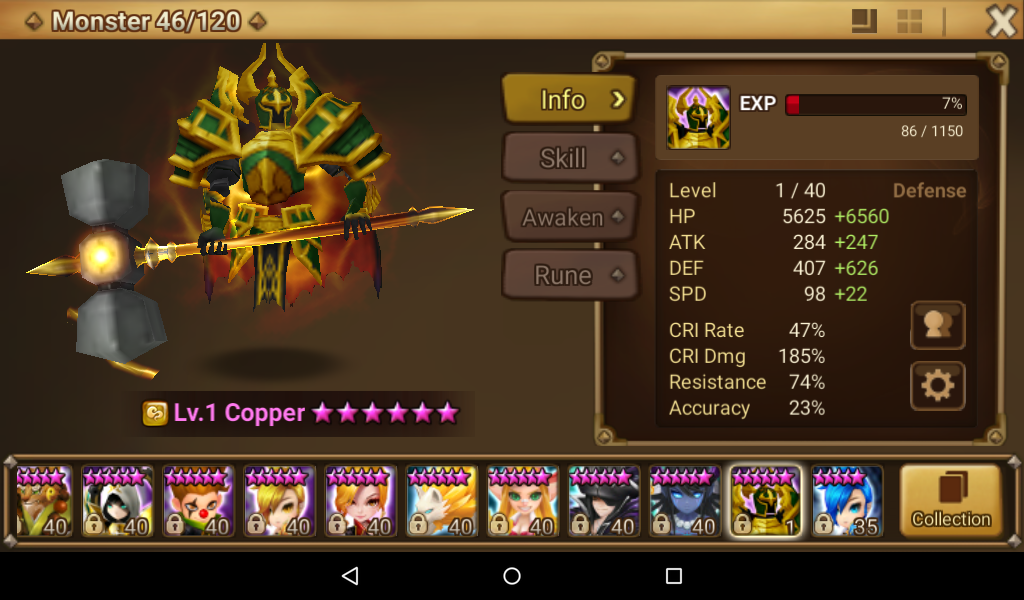 Copper is great, no joke. His second skill is an AoE defense break which is always good no matter what. It also adds to his third skill, Thunder Strike. Basically, if he has more than 51% defense of the target he’s attacking, he’ll ignore their defense – plus the damage is based off of his defense.

A good Guild War Offense team featuring Copper would be Imesety, Copper, and Bulldozer. In my case, though, I use Olivia, Randy/Bulldozer, and Copper. 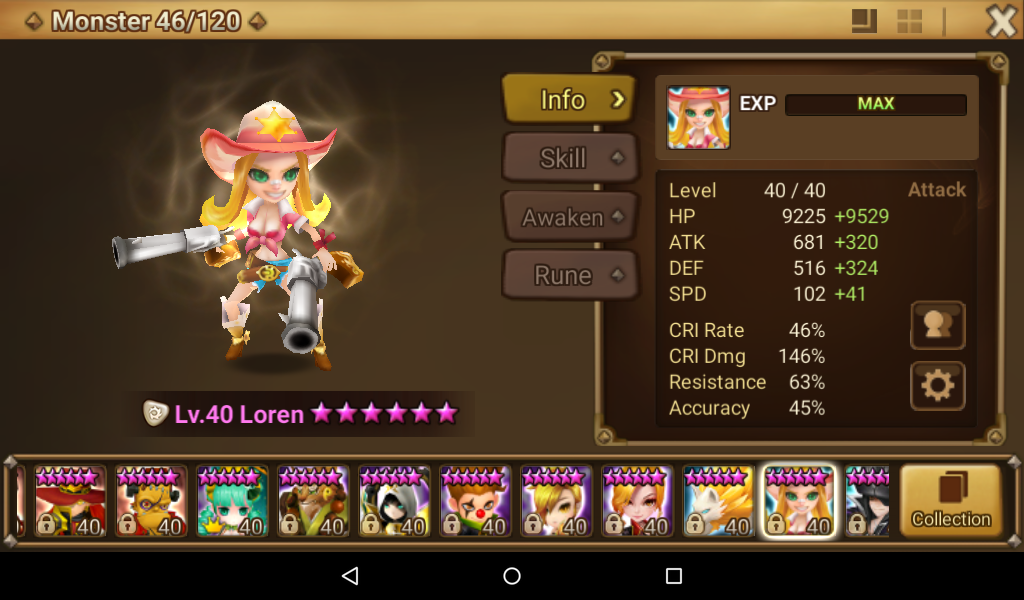 Like Lupinus, Loren’s a pretty niche monster. She really only shines in NB10, but wow, she’s great in there. Her kit’s perfect for the dungeon – two multihit skills, slow-down and healblock debuff, and a passive that inflicts defense break for one turn every hit? Sign me up!

Other than that, I don’t know where else to use Loren in. Most of my NB10 monsters I had six-starred solely because I needed the extra stats in order to make my runs more stable. I do like Loren, though; she’s really good. I used her at one point for an extra difficult Trial of Ascension boss stage.

Basically, I would recommend six-starring Loren for NB10 if your runes aren’t good enough or need extra stats. 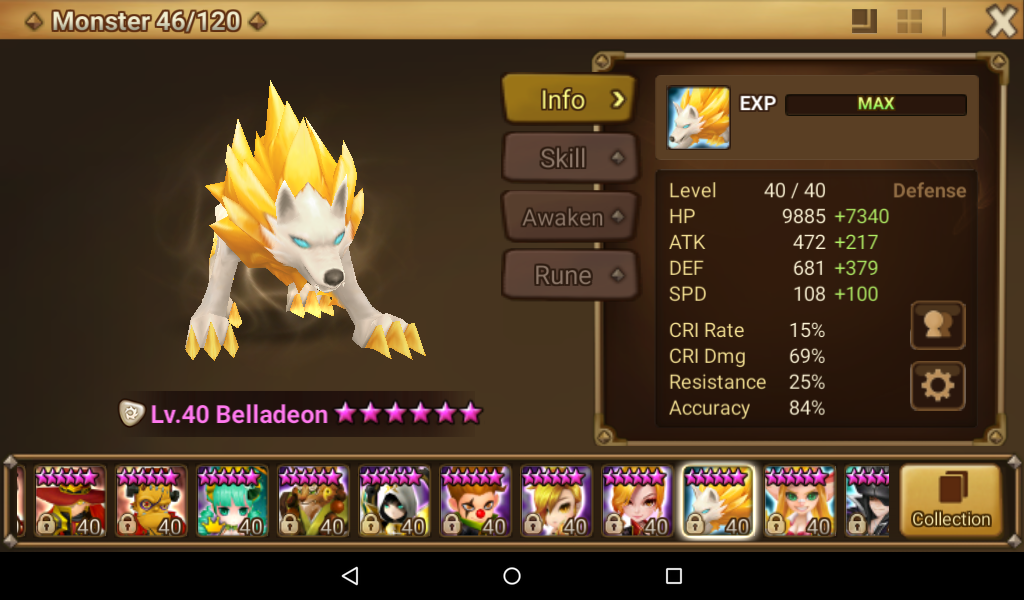 I still use Belladeon on a daily basis (along with Veromos), so she’s probably a lot better to me than she would be for some other player that’s at a higher point than me. She’s got a two-turn defense break on her first skill, strips all beneficial effects off an enemy with her second, and a really nice heal on her third.

Mobilize (her third skill), heals everyone by 30% of their max HP and increases their attack bar by 30%, too. She’s essentially the “Swiss army knife” of early and even mid-game Summoner’s War, because she’s got all the essentials that you’ll ever need. 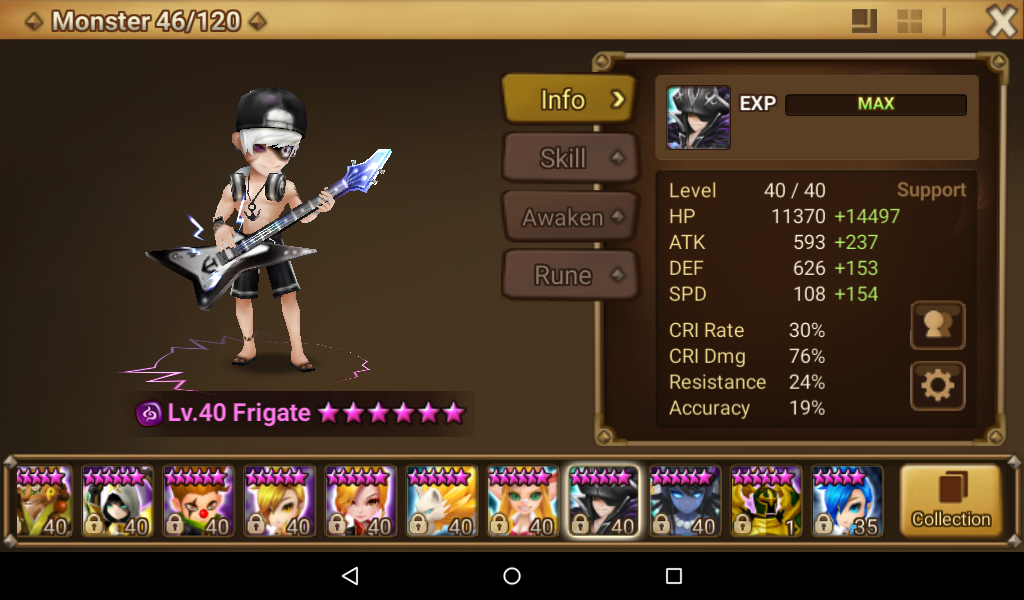 I love this dude so much, you have no idea. I got him from the wish really early-game, as mentioned a million times before, and he’s basically been the better version of Bernard for me. I never used Bernard in my GB10 team, so I also never had a reason to build him.

His third skill Full Speed Ahead increases the attack bar of all allies by 50%, and decreases their cooltime for one turn. Basically, if you can get Frigate fast enough, you truly will be able to wreck stuff in the Arena. Right now he’s 262 speed, but I’m trying to get him to 300. 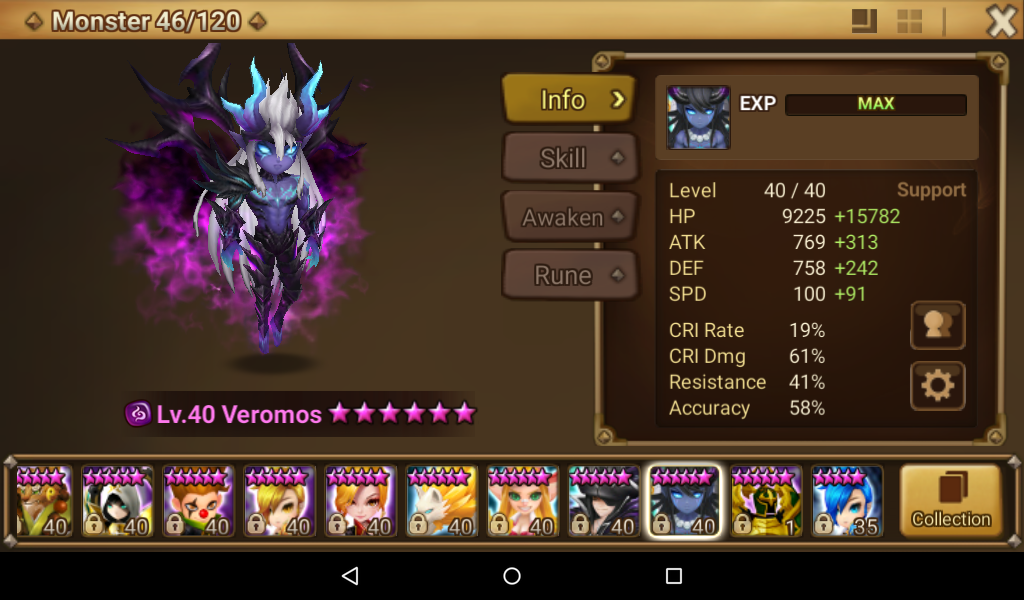 There’s a reason why Veromos and Belladeon are the bread and butter of early-game PVE. Veromos is the first five-star monster that you should fuse, because he’s going to be the real MVP of early-game ToA, GB10, DB10, and so much more that I can’t think of right now.

He’s best known for his passive skill, Conversion of Magic. He’ll remove one debuff (excluding sleep, stun and freeze) off of all allies, healing himself by 3% of his Max HP for each debuff removed. This is exceptionally important in early-game dungeons because of the defense break in GB10, and the Continuous Damage in DB10. Definitely six-star him.

That’s been a review on all 20 of my six-stars as I write this! When I hit 40 six-stars, I’m going to do this again, reviewing my new 20 monsters. I might even re-review these other 20, because at the 40 mark I’d have gained some new perspective as I advance from  mid-game to…whatever comes next. I’m Sara Ann, and I’ll see you in my next article!