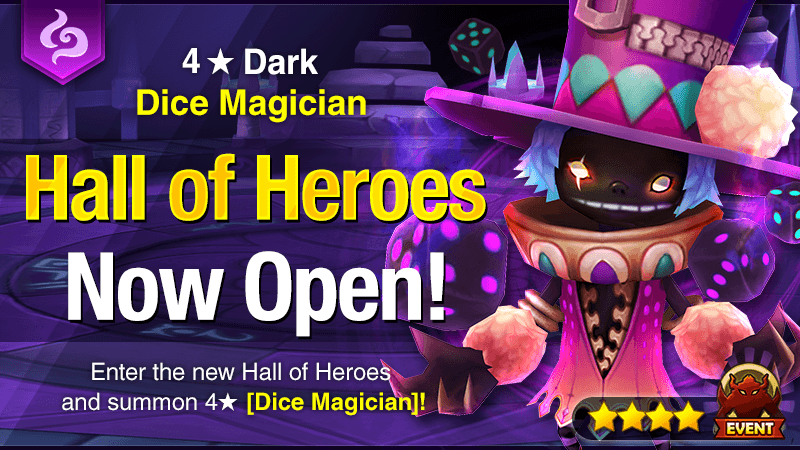 <![CDATA[WOOOOO I GOT AN LD NAT5 NOW- On Wednesday, March the 8<sup>th, the Monte (dark Diec Magician) Hall of Heroes was announced. Apparently, he and Mo Long are really good together, and since I have a Mo Long, it’s gonna be great. Before we begin, Hall of Heroes is a lot like Trial of Ascension, so that means you can use Trial of Ascension strategy and monsters (e.g. attack bar pushbacks, stuns and continuous damage are king). I strongly advise bringing your regular Trial of Ascension team. In my case, I’m using Baretta (L), Charlotte, Rica, Frigate, and Verad. Yeah, I love my Rica.

Well, he’s actually pretty niche, unless you have a Mo Long. Monte’s third skill, Destiny Dice, can actually heal the enemy if you’re not lucky, but if you are lucky, you can reduce the enemy’s HP to 10%. It rolls two dice, redistributing the HP ratio of the enemy he attacks according to the smaller number of the dice. Now, if he gets the same number on both dice, he’ll instantly get another turn. 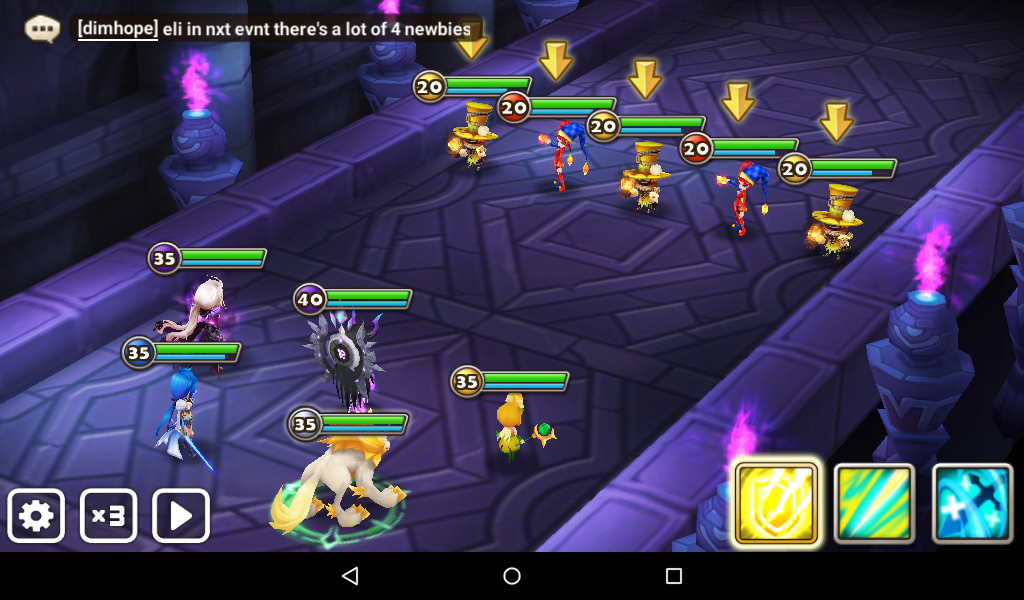 Wellll, I said my main team earlier, but frankly I just wanted to do this article a few hours earlier, so I hopped on over to my Asia account. But anyway! This first stage is made of three Morrises (wind Dice Magicians) and two Claras (fire Pierrets). The Threat: For damage, I’m gonna have to say that Clara is the bigger threat here. Her third skill, Wheel of Fire, attacks all enemies three times. Each hit has a 30% chance to remove a buff and even stun the enemy for 1 turn. Howeve,r if she uses this with her HP at 100%, then she’ll increase her attack speed for 2 turns afterwards. Now, Morris is actually an AoE reviver. His passive, To Live or to Die, rolls 2 dice at the start of each turn if an ally is dead. If he gets the same number on both dice, then he’ll revive all dead allies. The allies will be revived with more and more HP the higher the sum of the number – so getting a 6 on both dice is going to be the highest amount of HP all allies are revived with. (I think they’ll be revived with, like, 60% HP?) The Solution: Oh, definitely kill all the Morrises first. Remember that he can revive everyone if you’re unlucky. You don’t really have to worry about Clara as long as you keep her HP under 100%, but that buff removal and stun may be a bit problematic. 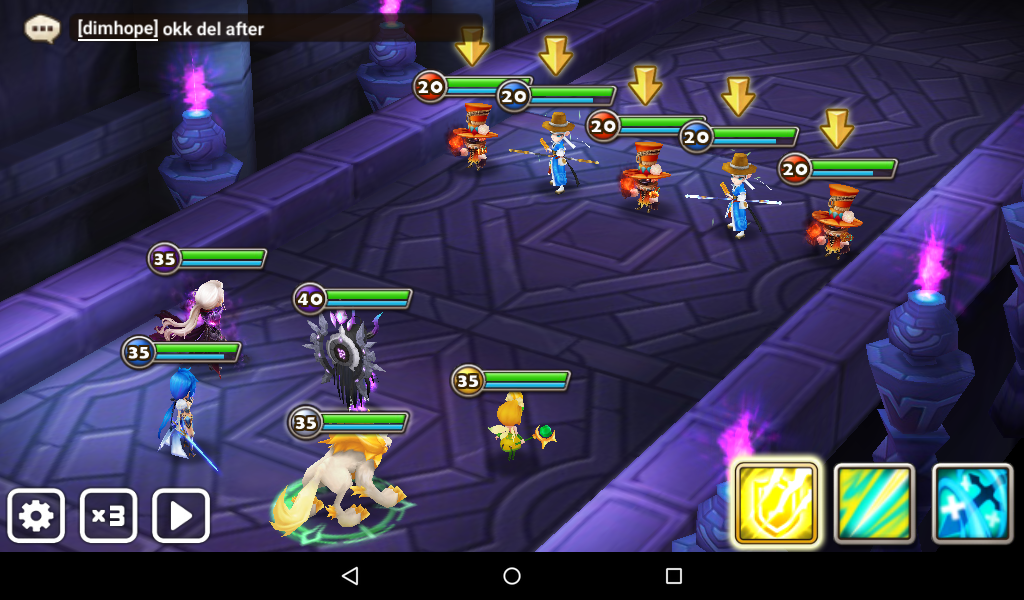 Stage two consists of three Ludos (fire Dice Magicians) and two Gildongs (water Taoists). The Threat: Ludo’s been known as a “mini-Theomars” before, but I don’t really see the resemblance. His passive, Roll Again, will roll a die at the start of each of his turns. The damage he inflicts on an enemy will be increased by up to 70% if the number on his die is large, and the damage he takes will be decreased by 70% if the number is small. Gildong’s just… I dunno, he’s just kinda there. His third skill, Destruct Evil, will attack the enemy 4 times. Each hit has a 25% chance to decrease Defense for 2 turns. The Solution: Well, Ludo actually isn’t that much of a threat, actually. I’d say that Gildong’s more of a threat than Ludo, because he can easily one-shot an enemy at the higher levels. So take out Gildong first, and then you can easily go for the three Ludos before we move on to the miniboss. 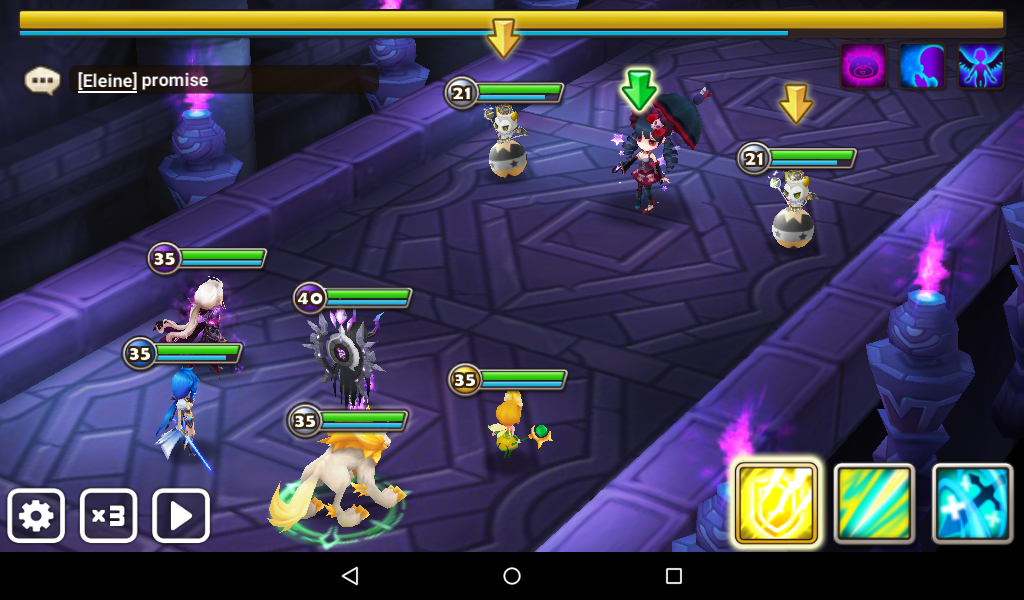 Miniboss time! Here, we have a Nicki (dark Occult Girl) and two Geminis (light Brownie Magicians). The Threat: Well, Nicki’s quite a bit of a threat, but Gemini isn’t a force to be trifled with, either. Let’s talk about Nicki first, before we go on about Gemini. Nicki’s got the second skill Girl’s Prayer, which cleanses all harmful effect off her allies and heals them based off her attack. But wait, there’s more! Her third skill, Dark Guardian Angel, attacks all enemies 5 times, granting Unrecoverable on all enemies and granting Attack on all her allies for 3 turns. Now, Gemini is actually really good. His passive, Small Grudge, increases his attack power by 50% if his HP ratio is smaller than the HP ratio of the enemy he’s attacking. And that’s not more, too! If he has less buffs than the enemy than he’ll remove a buff from the enemy when he attacks. The Solution: Now, you could go for Gemini, because they’re annoying and have an AoE attack meaning he can steal buffs off of everyone. However, I personally like to go for the miniboss herself first and just… straight-up kill her. You don’t need to kill the lackeys to move on. 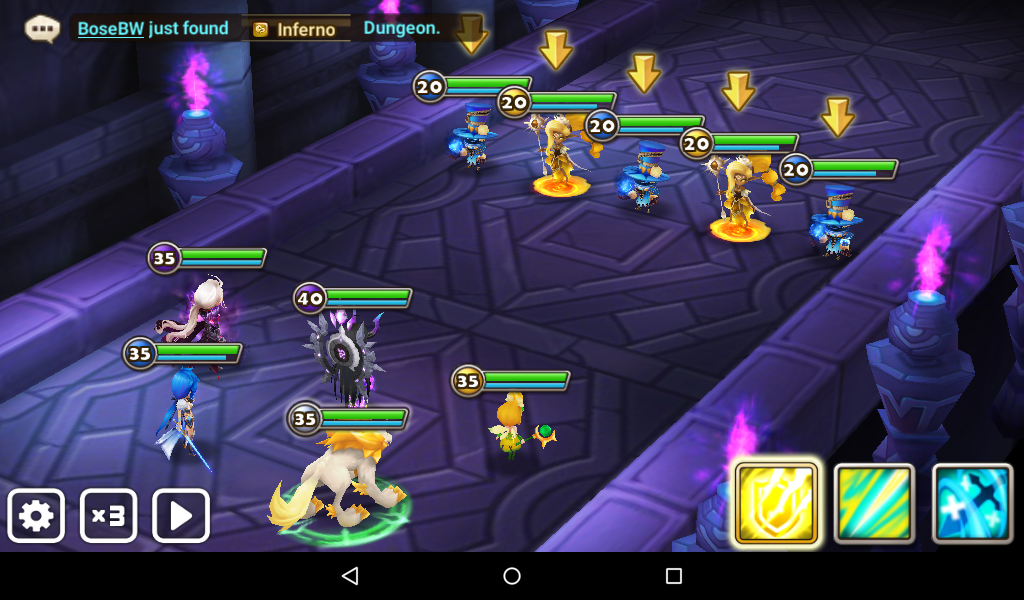 We’re almost at the boss, now! This stage 4 consists of three Renos (water Dice Magicians) and two Delphois (wind Undines). The Threat: Delphoi is a good supporter, but Reno is more of the damage dealer than Delphoi. Her third skill removes all harmful effects off her allies, heals them, and then plants Immunity for 2 turns on them. She’s actually really nice for the Raids. Now, Reno isn’t… good, per say, I’m just saying that he’s gonna be real annoying in the later HoH floors. He rolls 4 dice, attacking all enemies. The larger the number of the dice, the greater the damage, but if the number is the same as the previous number, he’ll ignore everyone’s defense. The Solution: Definitely go for Delphoi first. Her immunity is annoying, and Reno doesn’t actually ignore defense that much. 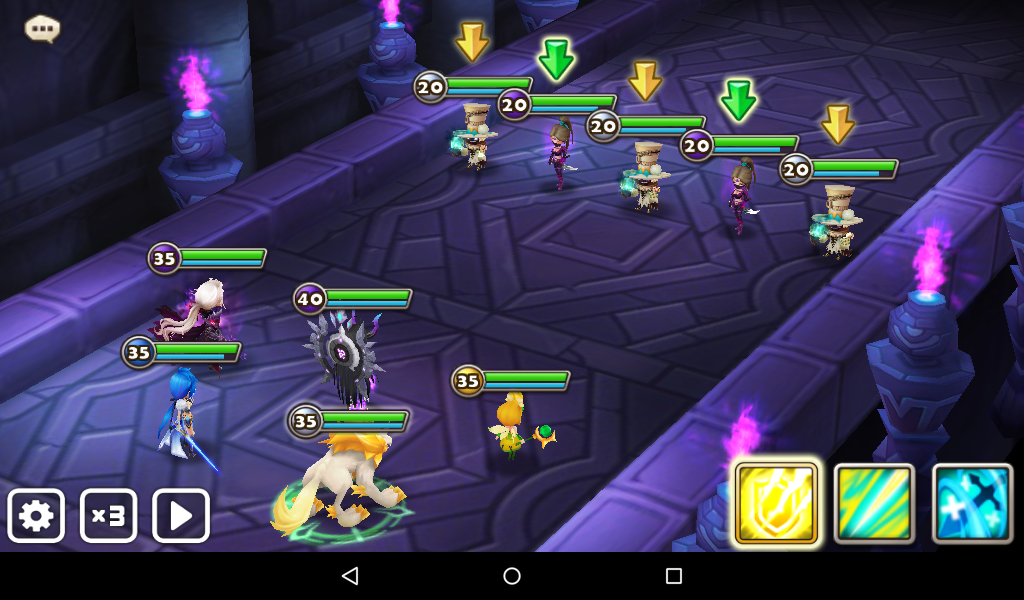 Last stage, everyone! Unfortunately, this is the hardest stage too, because this consists of three Tablos (light Dice Magicians) and two Isabelles (dark Assassins). The Threat: Sooo, Tablo actually used to be the total meta in the Arena because his third skill was so broken. His third skill, Returned Dice, just… resets the attack bar of literally everyone in the field. His allies and his enemies. It goes through Immunity and ignores resistance, too. However, he also increases the attack speed of all his allies, too! Thankfully, he got nerfed, too, by stunning himself for 1 turn after using Returned Dice. However, unlike Bulldozer’s third, it also ignores effect resistance and goes through Immunity. Isabelle, meanwhile, has the third skill Endless Death. She attacks an enemy, and instantly grants herself another turn if the enemy dies. If anyone on the battlefield dies (enemy or ally), then Endless Death will instantly reset its cooldown and be able to be used again. The Solution: Oh, yeah, definitely go for Tablo. You don’t want him to reset everyone’s attack bars. After that, feel free to go for Isabelle. As long as you stun her and don’t let her go for a turn, then you should be just fine and won’t frickin’ die. 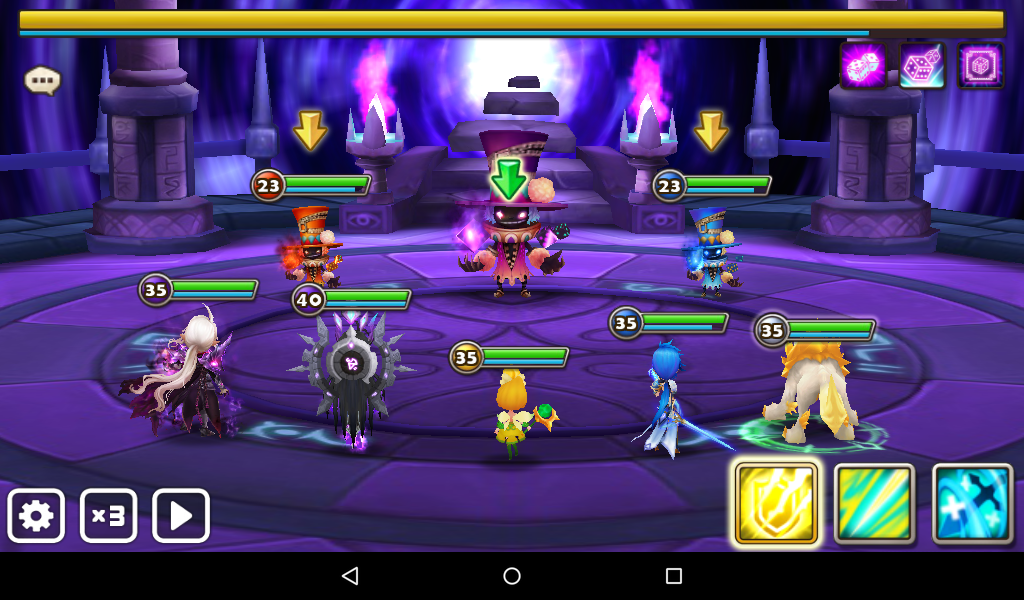 We’re at the final boss, everyone! Now, remember that the elements of the lackeys will always be different in each stage – in this case, B1 is made up of a Reno, Monte, and a Ludo. The Threat: Well, the threat will always be different because the lackeys will always be different. In this case, the biggest threat is the boss himself, Monte. The other two are just… there, I guess. The Solution: There are two ways to go through this stage. You can take out the lackeys and the boss, or you can just nuke out the boss right then and there, and you’ll be good. Whichever one works better for you is the solution I’d recommend for it. I hope you liked this article! How many Montes did you guys get? Let me know in the comments down below! For now, I’m Sara Ann, and I’ll see you in the next article!]]>