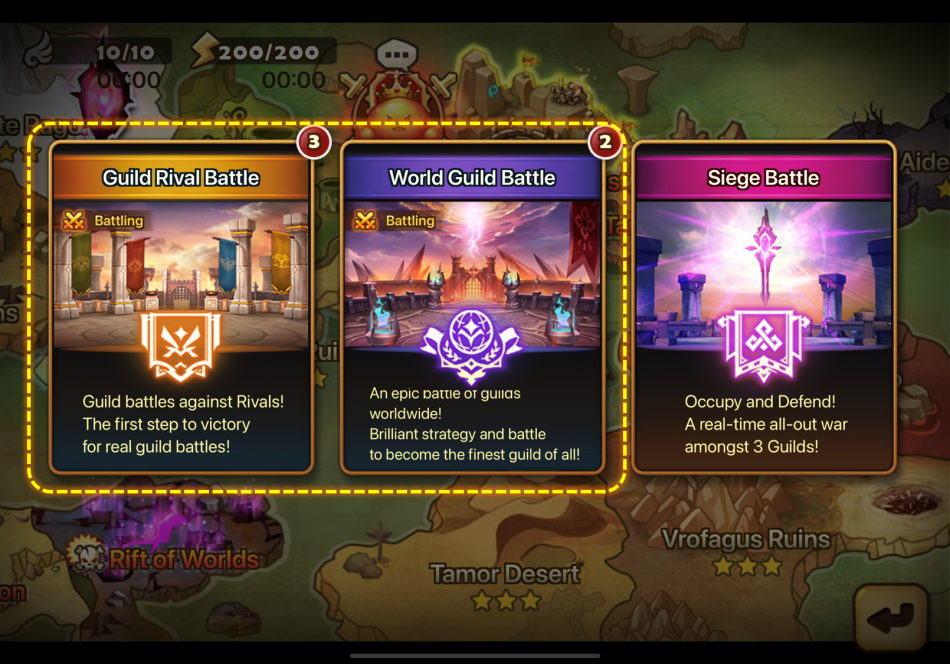 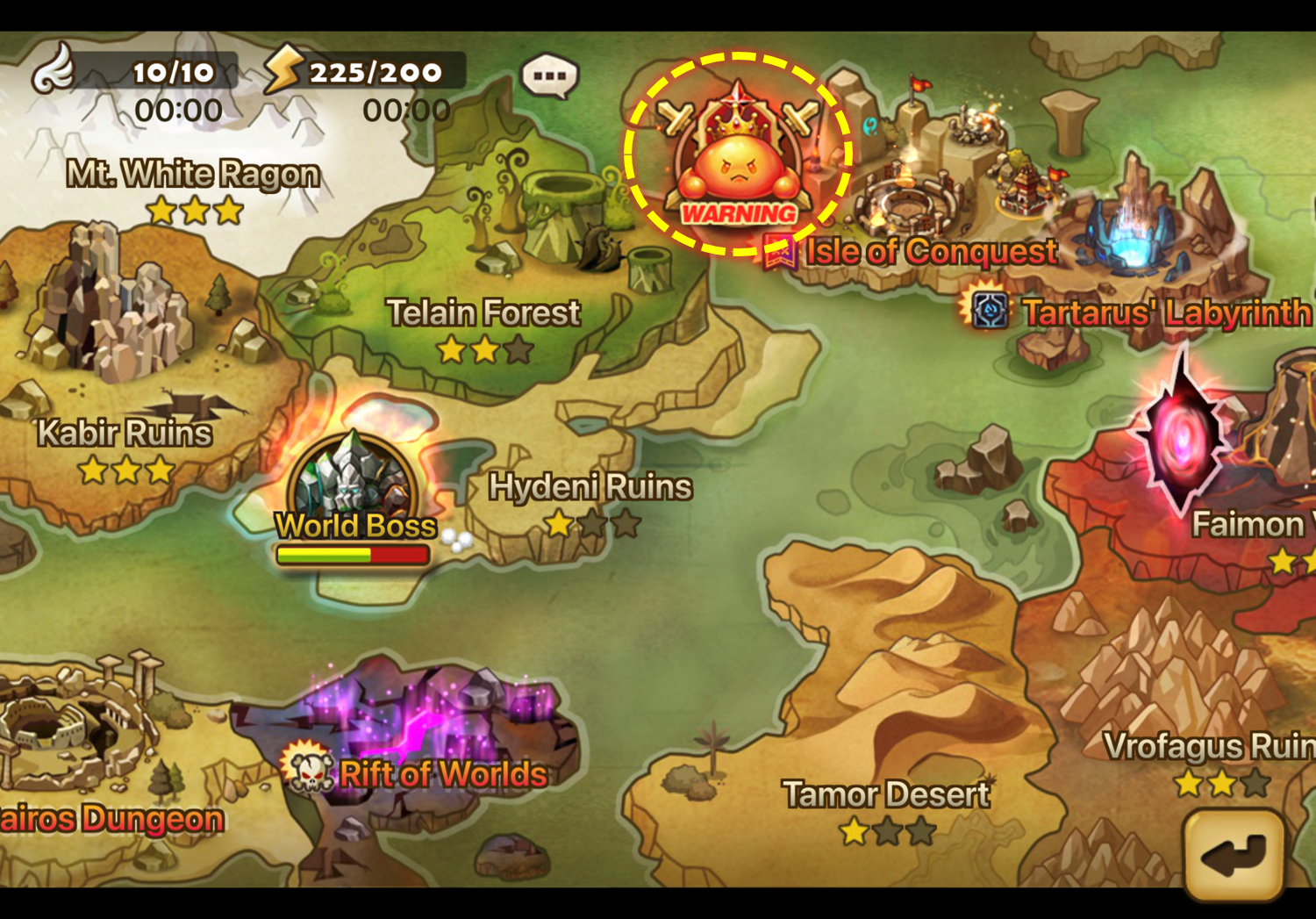 : An icon used to enter the Monster Subjugation has been added next to the World Map – Isle of Conquest.

: Monster Subjugation is PvE content where your guild members fight together to defeat Monsters. Guild Master, Vice Guild Masters and Senior Guild Members can declare battle at the time of their choice once a week. There are two rounds, each round lasts 12 hours, adding up to 24 hours in total. You cannot declare battle from 11pm on Saturday to 12am on Sunday (server time).

: After the v7.0.0 update, you have to manually declare battle every week. We will be adding an auto start function soon through an update. 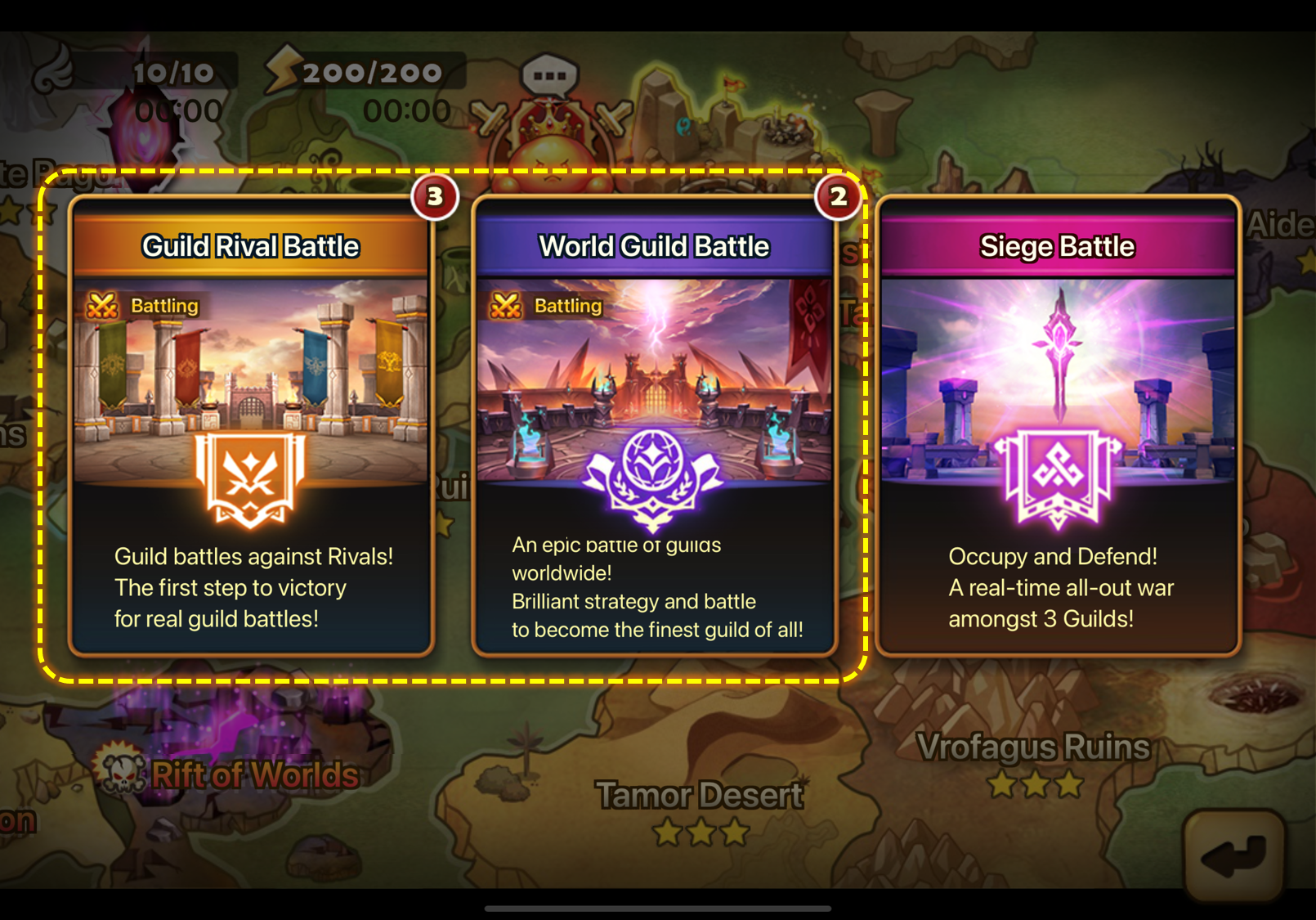 : A World Guild Battle menu has been added to the World Map – Isle of Conquest.

: World Guild Battle is PvP content where guilds of all servers fight against one another to attack the opponent guild’s defense bases. The guild that destroyed the most HP wins. The battle proceeds on Wednesdays and Fridays for 45 hours.

: Right after the v7.0.0 update, the World Guild Battle’s guild grade will be determined by the grade your guild had at the end of the last Guild Battle. Legend guild will not be displayed separately, but will after a certain period of time.

: Please refer to the following information regarding the newly added item, Legendary Summoning Stone, which can be obtained as World Guild Battle rewards. 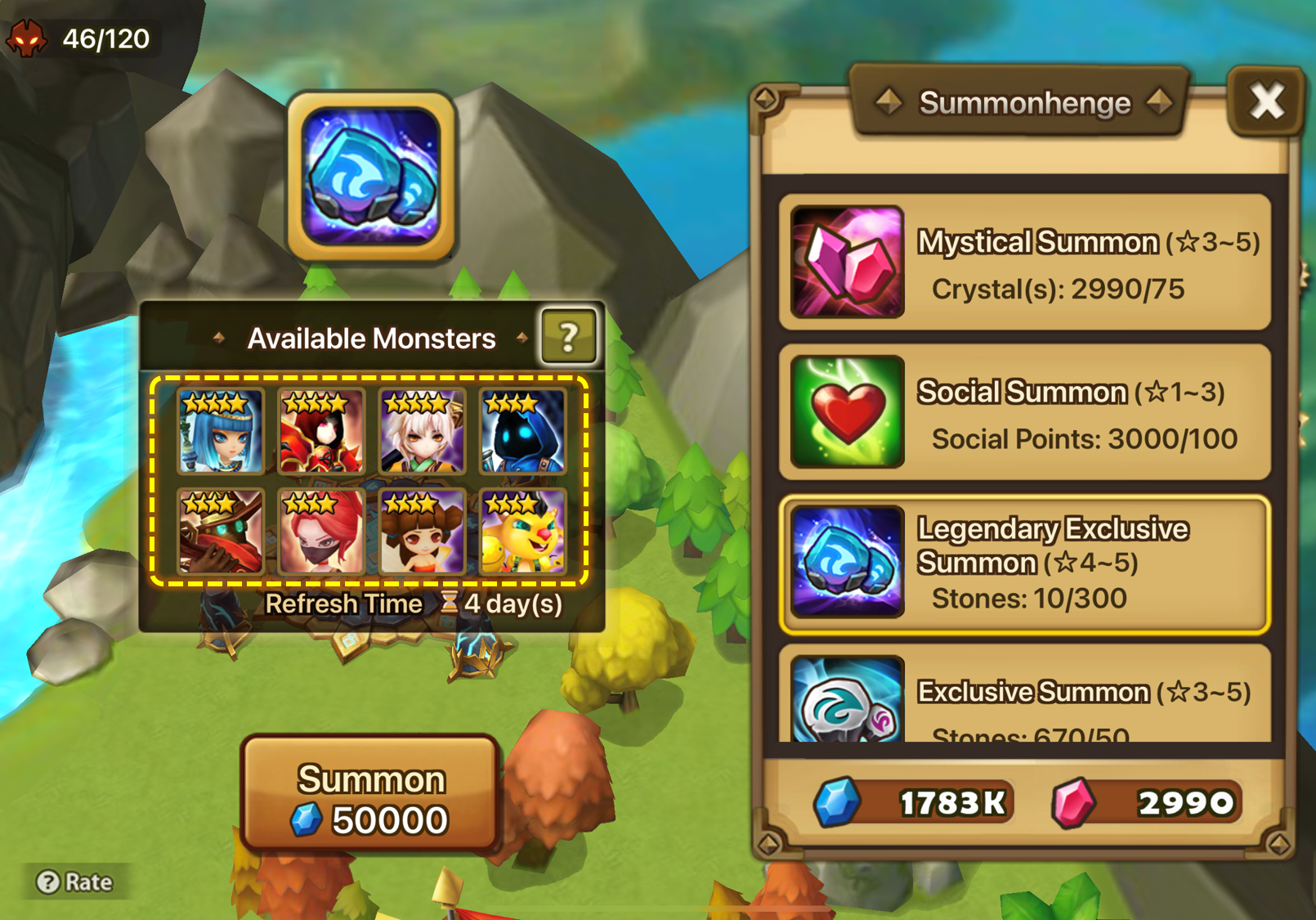 : Legendary Summoning Stone is a special summoning stone that summons a default 4-5★ Monster listed in the exclusive summon list.

: A Guild Rival Battle menu has been added to the World Map – Isle of Conquest.

: It’s battle content where your guild fights against Rival NPC guilds. The battle will begin every day at the time assigned by your Guild Master, Vice Guild Masters or Guild Senior Members, and each battle will last for 23 hours.

– Here are the new and changed reward items. 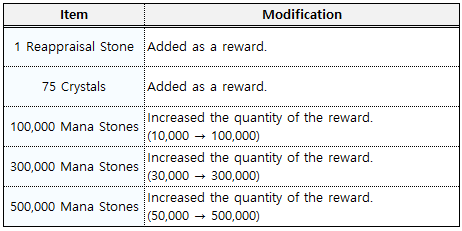 – Rune rewards obtainable from Trophy Boxes have been improved as follows.

: Shiny Trophy Boxes of all grades will drop 6★ Hero – Legend Runes only.

: Trophy Boxes of all grades will not drop 5★ Rare or lower grade Runes.

: Trophy Boxes of A- or above grades will only drop Legend grade Runes for 5★ Runes.

: Trophy Boxes of S or above grades will not drop 6★ Rare or lower grade Runes.

: The overall drop rate of higher-grade Rune items has been increased as much as the drop rate of lower-grade Runes that were excluded from the reward. The grade of Runes obtainable according to the Trophy Box grade is as follows. 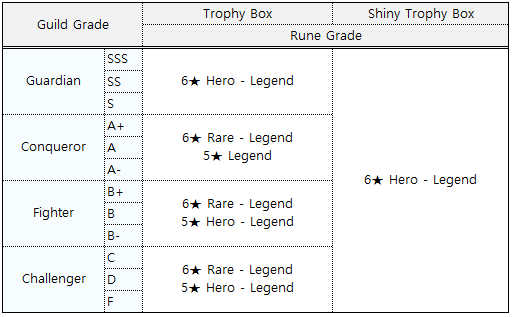 ※ The changes will be applied to the Siege Battle that begins on Aug. 15th.

A new building where you can check the various types of guild content at a glance has been added. You can install the Guild Tower Building via Guild Shop. 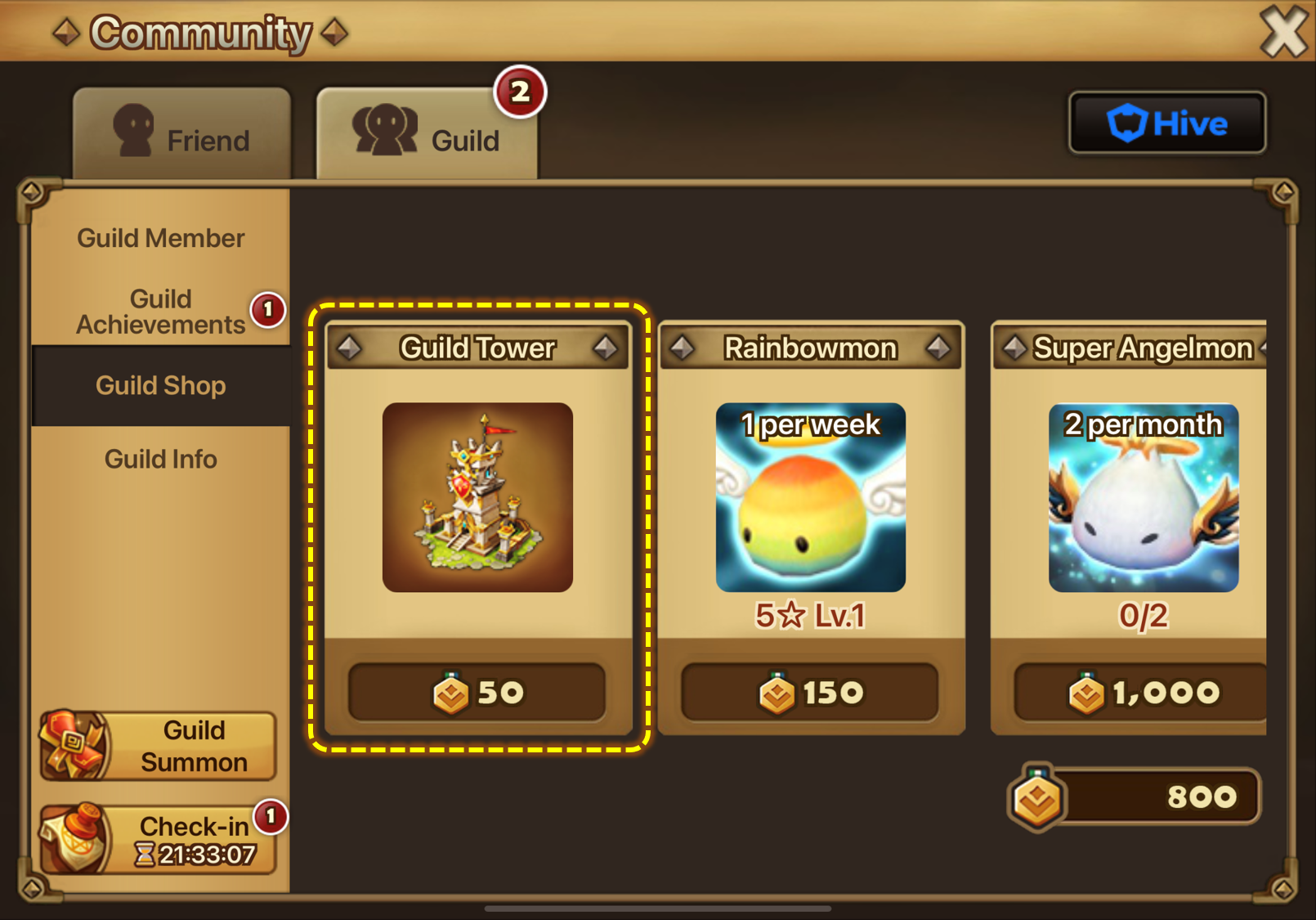 – A guild profile function where you can place Monsters of other guild members in the Guild Tower Building has been added. 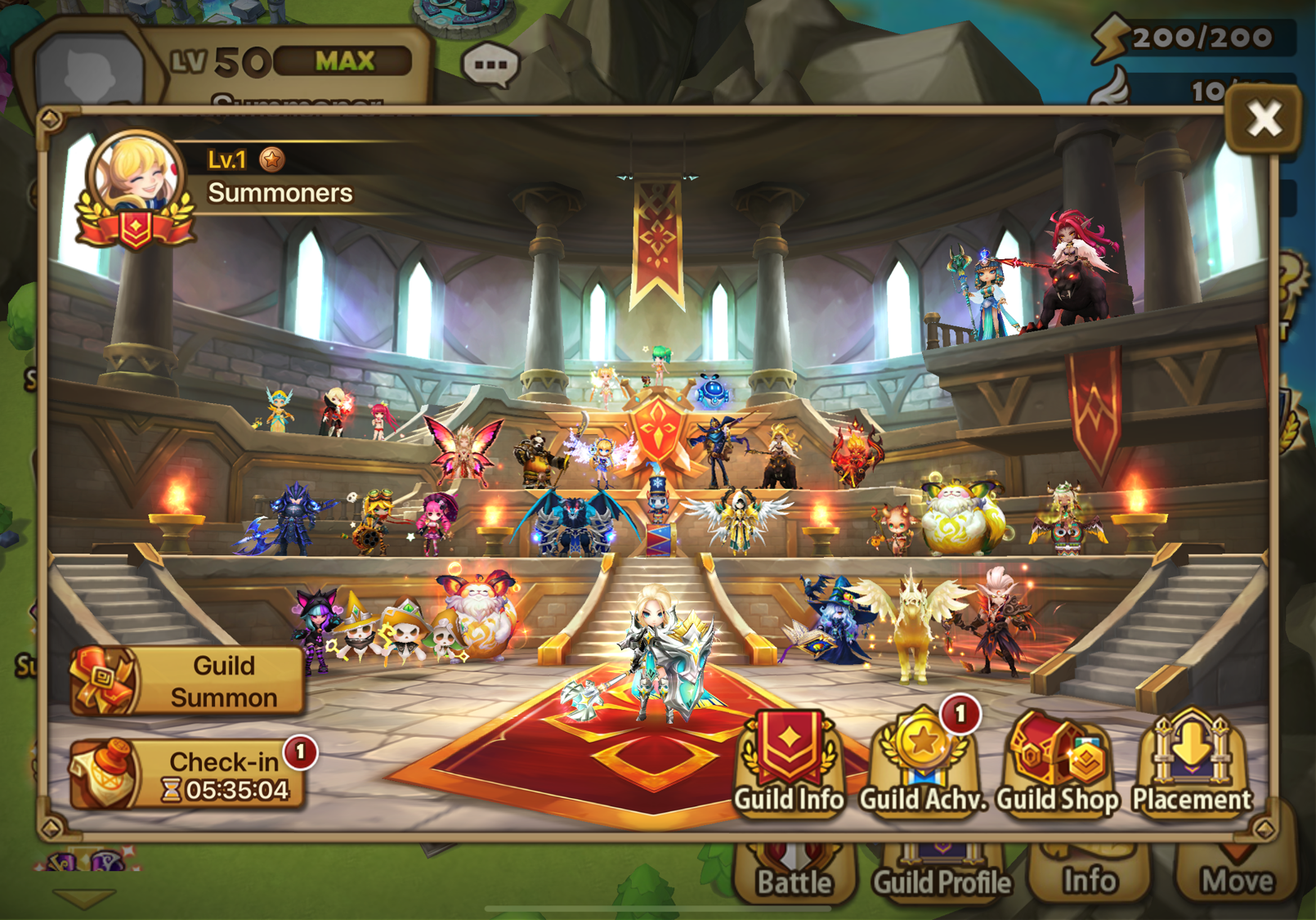 * Each guild member’s rep Monster is selected as default with the v7.0.0 update. You can change the Monster via (Guild Tower > Guild Profile > Placement Settings).

– The grade mark that represents a guild has been changed from Guild Battle grade to Siege Battle grade. 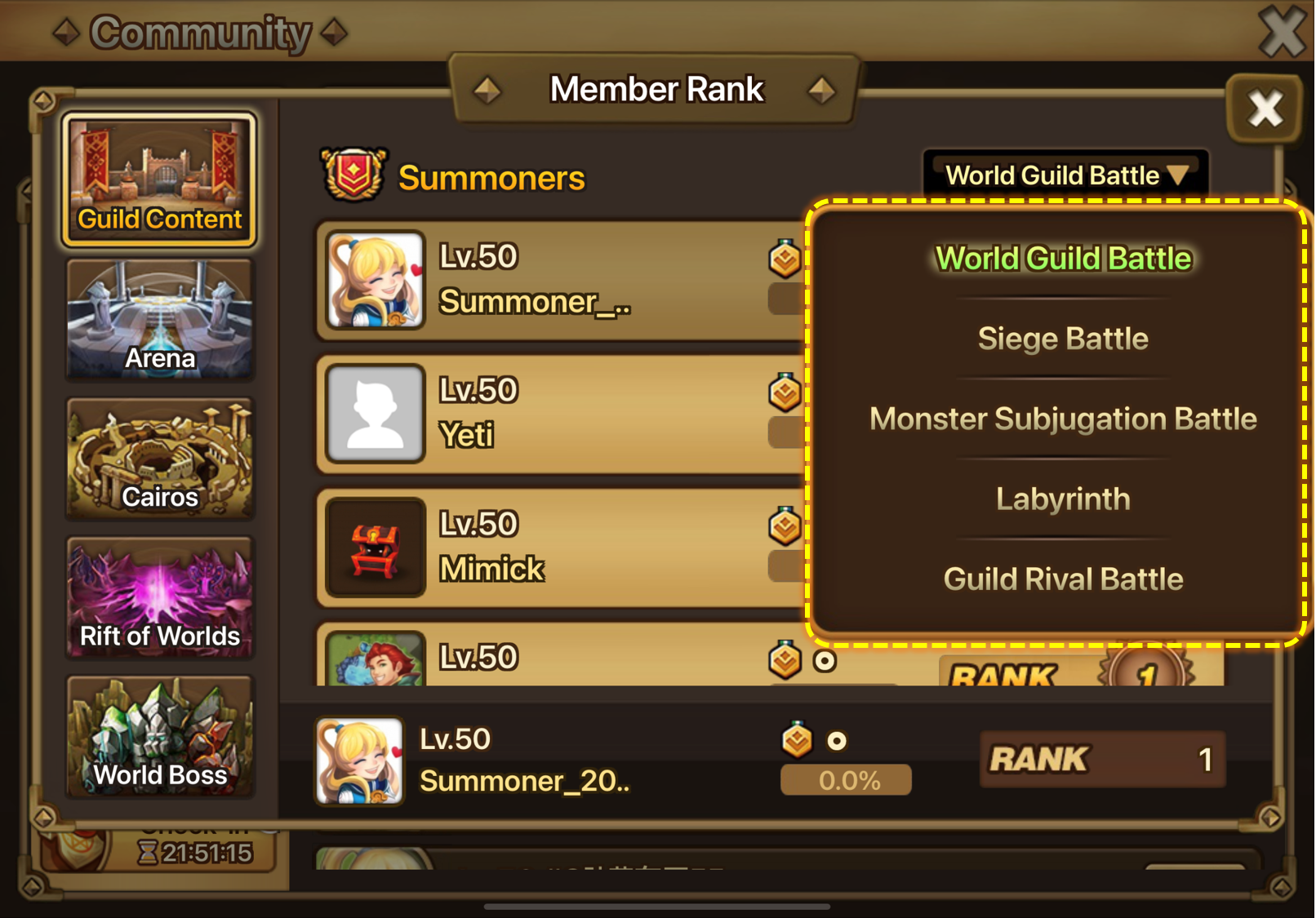 – With the addition of the Guild Tower building, the icons on the left side of the island screen that direct you to the [Isle of Conquest] and [Tartarus’ Labyrinth] have been removed.

▶ An exclamation mark will now be displayed on the chat icon and guild chat tab when there’s a new guild announcement.

▶ [Arena Interserver Battle] An attack chance will not be deducted if the game ends abnormally during the battle loading screen.

▶ Some battle loading images (Scenario, etc.) have been changed.

▶ A banner where you can watch the livestream of SWC2022 in the Arena and World Arena lobby has been added.

– A banner will be exposed to the Arena/ World Arena lobby when the SWC2022 match goes live, and you will be directed to the YouTube channel to watch the livestream when you tap the banner.​

▶ The following gift will be given to all Summoners to celebrate the guild content massive update.