<![CDATA[On Wednesday (December the 7<sup>th), Com2uS announced a Tetra Hall of Heroes. On Wednesday, Betta, Molly and Platy owners – me being a Platy owner – rejoiced, for now we could get skillups for our Mermaids. If I recall correctly, it had also been almost two or so years since we last had a Mermaid Hall of Heroes, that being Cichlid. Today, I’m going to talk about my tips and strategies for this Hall of Heroes; this article being from the perspective of a midgame player. Please keep in mind that I am not, by any stretch of the phrase, a not-terrible player, so the highest floor I can clear is only up to B6. Before we begin, I just want to get this out in the open…

To put it simply: not in most circumstances. (I find it ridiculous/sad/ironic that the water Mermaid is the worst.) Though her third skill can only be resisted against Immunity or passives that immunize the monster against sleep, remember that it’s just sleep, as opposed to Stun. Of course, we aren’t going to be seeing Tetra being buffed to stun instead of sleep, because that would make her Charlotte levels of overpowered. However, she’s really only usable in the Trial of Ascension, and even then she has to be with a Succubus (who doesn’t wake up monsters under sleep) or with Sonnet, who also brings AoE sleep. Under no circumstances are you going to be able to see Tetra in the Arena, because once you hit Conqueror 1, everyone is going to be under the influence of Will runes. It’s sad that she’s pretty much unusable; she’s so pretty. 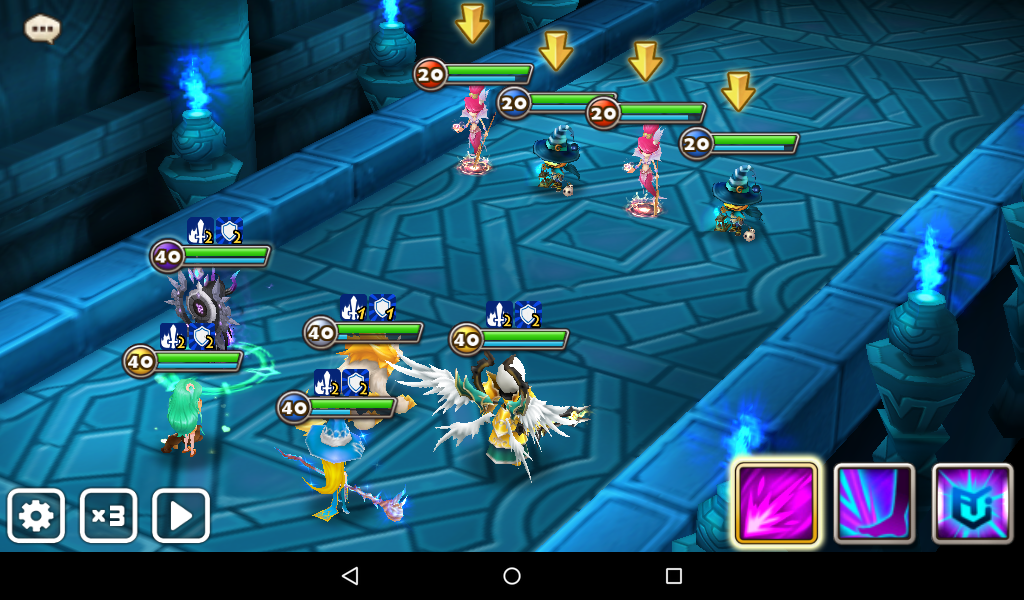 In this stage, you will see three Platys (fire Mermaids) and two Chillings (water Jack-O-Lantern). My picture only has two Platys because I killed one by accident before I could take the screenshot. The Threat: The biggest danger in this stage is the Platys. I assume you’ve taken many wind monsters with you into this Hall of Heroes, because the boss herself is water. Well, wind’s weakness is fire, so you’re going to have extra difficulty killing her. That already puts the odds against your favor. Not only that, Platy recently got buffed. Instead of putting her enemy on Silence for 2 turns with her third skill, “Burning Hearts,” she sets all of their skills on max cooldown. Let’s also not mention that Platy can revive a dead ally with 30% attack bar and 30% HP, at the cost of 3 turns being added to Grant Life. The Solution: I highly recommend keeping Platy under stunlock/killing her as fast as you can. Whatever you do, make sure that she doesn’t use either Burning Hearts or Grant Life. As for Chilling, what’s the most menacing about him are his buffs and his passive that makes him steal buffs off of your team. However, since he’s a water element, you’ll have no problem killing him, so I won’t talk about that. 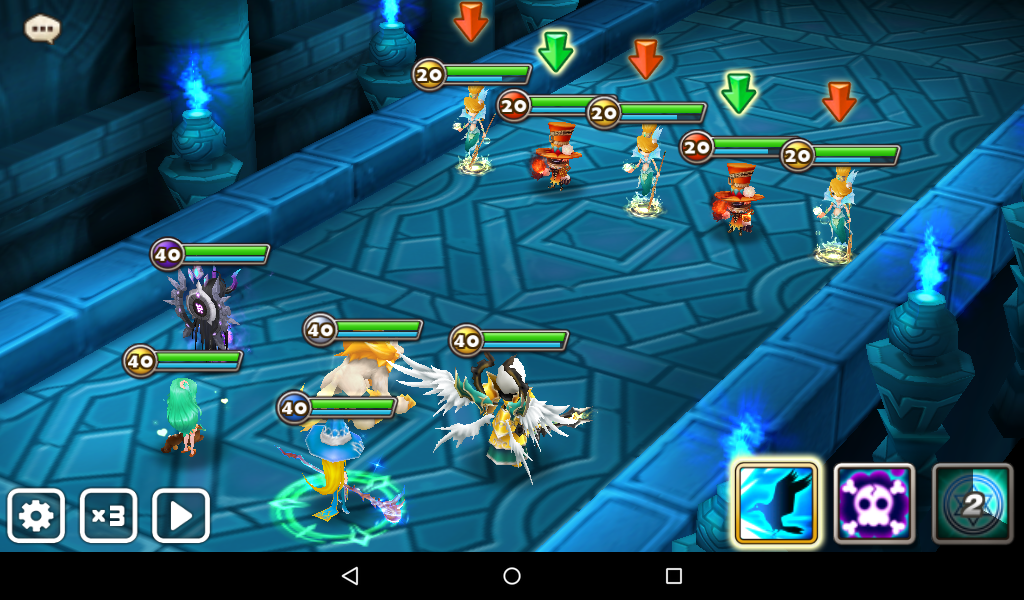 Welcome to stage 2. You’ve officially survived long enough to get here, and I’m proud of you for that. Have an internet applause because honestly, you deserve it. The Threat: Anyway, in this stage you’ll find three Cichlids (wind Mermaids) and two Ludos (fire Dice Magicians). Your biggest threat in this stage will be the Ludos. People have been calling him “budget Theomars,” and after I got one myself, I can see that he was not given this nickname for no reason. The main reason he was granted his nickname was because of his passive, “Roll Again” and a catch on both of his skills. For those who are out of the loop, Theomars’s passive basically gives him an elemental advantage against all enemies, no matter their true element, and will buff himself with Endure when he hits 1 HP. People have also been suspicious that when Theomars is runed on Violent runes, he will be guaranteed to get at least two additional turns. This is why Ludo’s called Theomars sometimes. When he gets the same number on both die – for example, rolls a 3 on both – then he’ll automatically get another turn; this is on both of his skills, too. His passive skill will also either decrease the damage he takes or increase the amount of damage he gives. Cichlid is one of the worse Mermaids. I don’t mean that by “Cichlid is pure cancer,” I mean like “eh, her dark sister is better” Her second skill, Air Shield, will completely remove all harmful effects off of one ally and will grant a shield for 3 turns. This shield is equivalent to 20% of her Max HP, unlike Tetra and Molly, which shields damage based off of their level. Her third skill, Crushed Hopes, attacks one enemy three times. The first hit will remove a beneficial effect, the second hit decreases defense for two turns, and the third hit increases all skill cooldowns by 2 turns. While this sounds overpowered on paper, her base speed is abysmal, so it would be difficult for her to get any attacks in. The Solution: Ludo’s passive can’t be activated if he doesn’t get to attack; as such, you should try to outspeed him and stunlock him before he can. As for Cichlid, I’d suggest pushing back her attack bar so that she can’t get a turn. 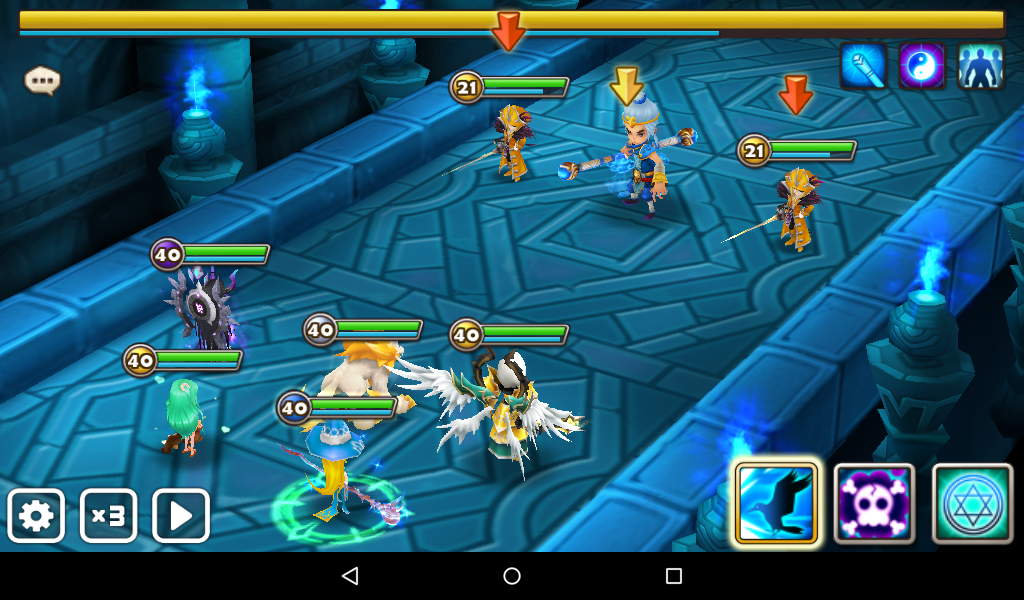 You’ve gotten to the miniboss stage now. This stage usually has a natural five-star as the boss, and two monsters unrelated to rest of the dungeon as the lackeys. In this situation, you can see Shi Hou (water Monkey King) as the boss and the two Barques (wind Pirate Captains) as the lackeys. The Threat: Don’t worry about the lackeys, you can kill them last. I guess you can say their Barque is worse than their bite – I’m so sorry Anyway, Shi Hou will be your biggest threat during this stage. Recently, he got buffed so that his third skill, All or Nothing, now also gives him Immunity for 2 turns on top of his Invincibility and each hit will have a chance to remove a beneficial effect whenever he lands a critical hit. While I have mentioned that Barque isn’t that much of a threat, he actually can do a lot of damage if he uses Shoot ‘n Slash and the first hit lands as a defense break. I just want to get that out in the open; other than that Barque shouldn’t be focused on, kill Shi Hou first. The Solution: I recommend having a buff remover like Megan to deal with Shi Hou’s Immunity/Invincibility; bonus points if they can remove all beneficial effects and not just one. Don’t worry about having a “wasted space” just for a buff remover; you’ll need said buff remover in a few stages. The miniboss cannot be stunned (just put to sleep), but the lackeys can. If you’ve got a sleep proccer like Charlotte, she’d be useful for this stage. 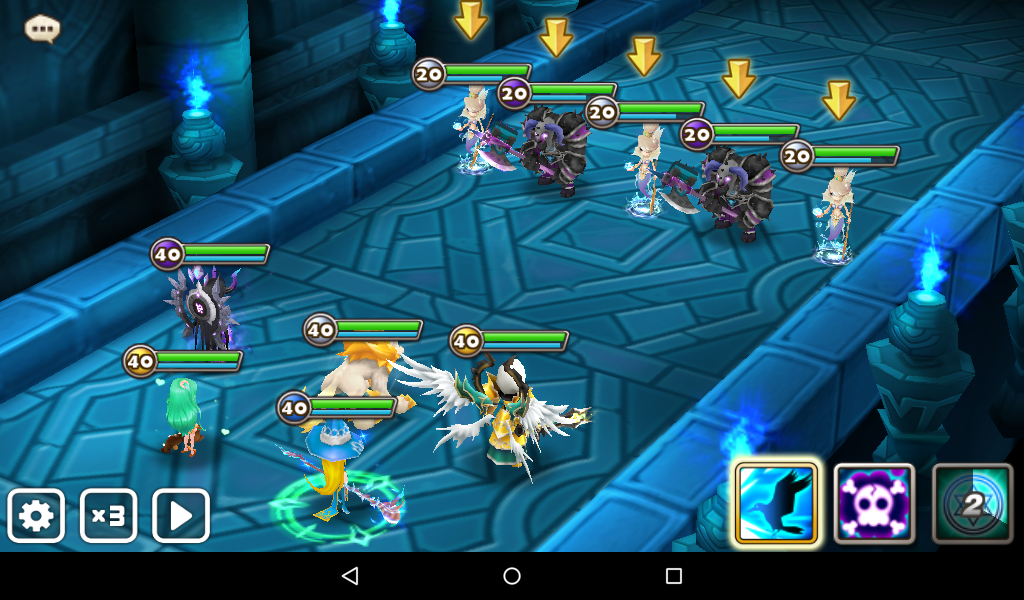 So you got past the miniboss, and you’re off on your quest to get Platy/Molly/Betta skillups. Good job. This floor has three Mollys (light Mermaids) and two Kamataus (dark Minotaurs). The Threat: Hah. Aaaaahahahahaha. Kamatau is not at all a threat. His passive means he’s not allowed to have beneficial effects – and at what cost? 100% attack increase for his low base attack? Increase attack power as his HP decreases? Hahahaha. The only real threat here is Molly. Her passive skill increases the enemy’s chances to land a glancing hit on a random ally, and will heal the ally with the lowest HP by 10% at every turn. On top of that, she’s got Air Shield as her second skill (but if you’re lucky she’ll cast it on a Kamatau). The Solution: Take out the Mollys first. Her passive can prove to be quite annoying at times. Just keep the Kamataus stunlocked until Mollys’ taken care of, and then you’ve basically got an easy win. Don’t get all cocky and think you can clear everything else, and I hope you’ve taken my advice on bringing an AoE buff stripper. 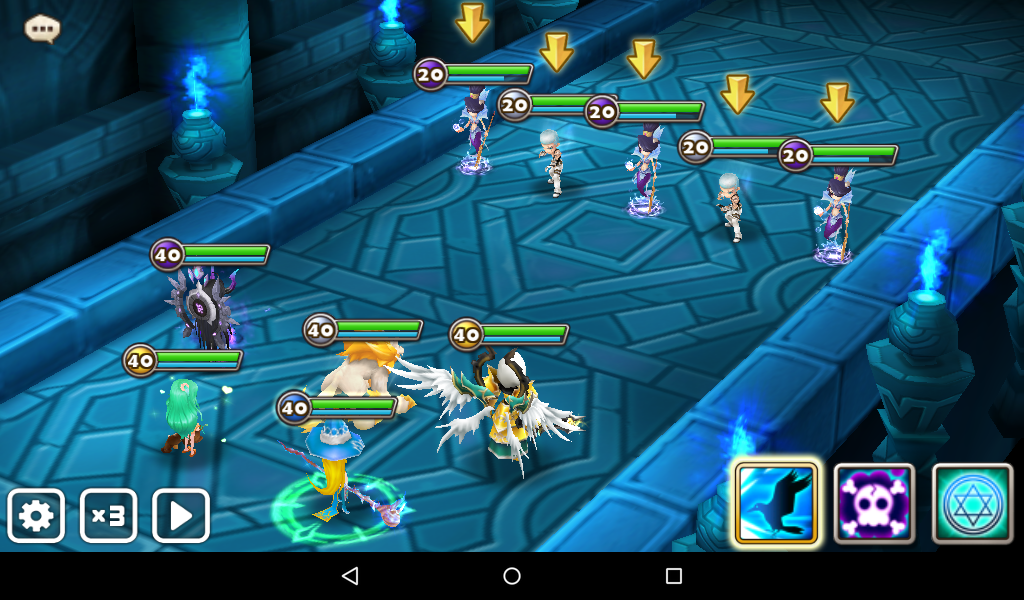 Oh boy. You’ve gotten to stage 5; undoubtedly the most difficult of the stages. This stage features three Bettas (dark Mermaids) and two Lucases (light Neostone Fighter) The Threat: This stage wouldn’t be so bad if it didn’t feature Betta in it. You see, Betta has been classified as the best of the Mermaids, and it’s no doubt why. Not only does she have the same second skill as Platy (Grant Life instead of Air Shield), but her third skill, Serenity, heals all allies by 15% and grants Immunity and Crit. Resist for 2 turns. The worst part about her is that she’s one of two Mermaids to get a speed increase upon awakening, so she’s not slow unlike her sisters. Lucas had also been recently buffed, so that, when he has his shield up, he does additional damage proportionate to the amount of absorption on his shield, and his Critical Rate is increased by 30%. This could prove to be quite a bother once you’re at some late stage not even I can reach right now. The Solution: Remember when I told you to bring an AoE buff stripper in Stage 3? This is 80% of the reason why. If you can’t outspeed the Bettas, at least you have a chance to remove the beneficial effects that they grant on everyone and the shield that Lucas grants himself. 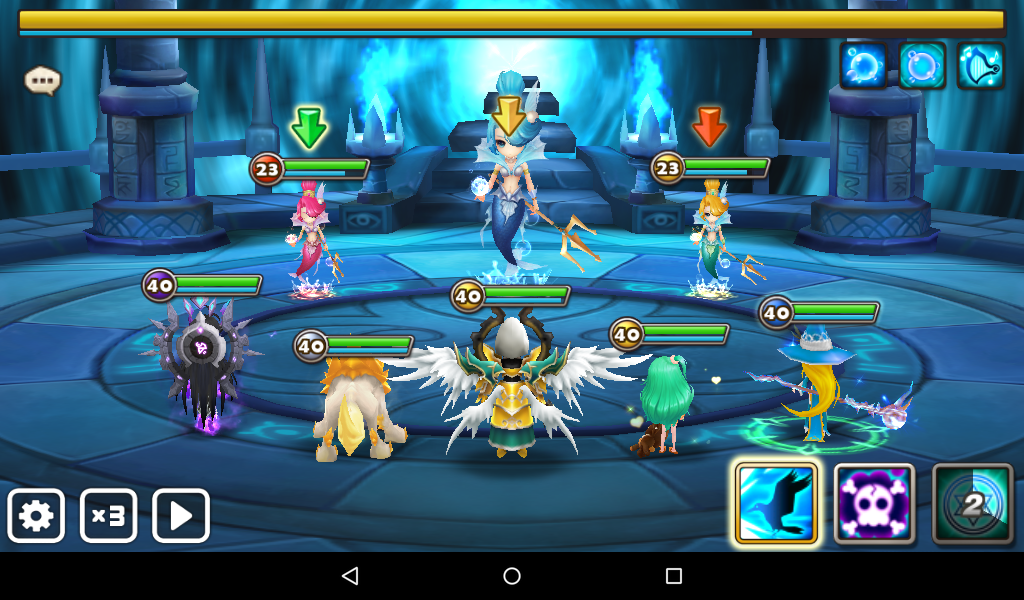 This stage has the most variety of the stages. This is because, although it’s the boss stage – the boss being Tetra – her lackeys will differ at each floor. As you can see, this is floor one, so her lackeys are Platy and Cichlid. The Threat: (At least in this stage) The biggest threat is Platy’s revive, but that doesn’t mean that Tetra isn’t a damsel in distress. Her third skill, as mentioned, ignores everything but Immunity and passives that block inability effects. Veromos’s passive only cleanses harmful effects (not inability), so there’s no hope in letting Veromos cleanse it. Not only that, Cichlid’s Air Shield is a better version of all the other Air Shields. Instead of being based off of her level, it’s based off of 20% of her Max HP. Her Shield can be quite a problem, but luckily it’s not Rina levels of bad. Tetra’s shield is worse than Cichlid’s, so it will be less of a problem if she casts her shield. Regardless, the entire single-target cleanse is more of a problem than the shield itself. The Solution: Kill the most troublesome Mermaid first – e.g. if you’re on a stage with Platy and Betta, kill Betta first and then Platy before she can revive Betta. Tetra will usually cast her third skill first, so if you can somehow find a way to put Immunity on everyone (e.g. Chloe) before she can cast Song of the Sirens; that would be great. Anyway, this dungeon seems fairly easy, with of course, the exception of Stage 5. However, it’s still worth it for those sweet Mermaid skillups and six-star materials. That’s it for today; I’m Sara Ann and I’ll be seeing you in the next article.]]>