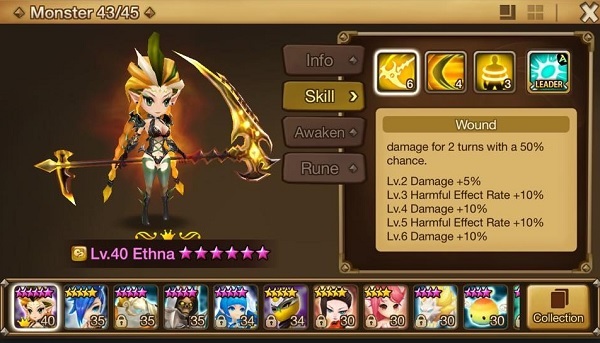 <![CDATA[ <h2>Overview After the recent monster balance, Ethna’s kit has allowed her to not only be effective in PVP but PVE as well. Natural Star Grade: 5★

Early Game: Fatal/Blade or Swift/Blade – ATK | ATK (CR/CD) | ATK End Game: Violent/ (Will/Fight/Blade) – ATK (SPD)| CD | ATK – DPS Build Substat Priority: SPEED → Crit. Rate→ Crit. Damage → ATK → Accuracy [easytable] Pros, Cons [Shatter] AOE Defense Break – low cooldown(2 turns), Wind Nuker – PVP Defenses are fire-heavy due to common AO units that ignore defense like Lushen’s Copper’s or Katarina. Great Base HP & Def for an attacker, [Capture] buff removal is not a 100% activation rate; can prevent stun mechanic to fail if immunity if not removed. High Base Speed (119 when awakened), Not an ideal candidate for PVP Defense. [Capture] Multi-Hit with buff removal & Stun – low cooldown (3turns), [Capture] Stun mechanic is capable of working even if Ethna glances., [Capture] Stun chance increases as the enemy HP decreases; if enemy’s HP under 30% it is a guaranteed Stun.,[/easytable] Early Game: Fatal/Blade or Swift/Blade My recommendations for Ethna is the same for any attacker. Because Ethna has an aoe defense break you can take advantage of a swift set giving her the first turn and allowing her to create opportunities for your party to kill mobs quicker. I prefer Fatal over Swift since she has a very high base speed when awakened, however it’s extremely hard to get the awakening materials for a natural 5 star in early stages of the game. Her capture skill will come in handy vs cairos dungeon bosses that have beneficial effects. End Game: Violent/ (Will/Fight/Blade) The violent set is the ideal primary set for PVP as you move through the mid-to-late stages of the game. The low cooldowns + great damage multipliers allows you to rotate her strongest skills extremely fast compared most natural 5 star attackers. I would focus on a violent set with a blade or will set. Fight subset is great option as well but are still relatively new and will be hard to collect seeing that you can only craft these runes. If the goal is to use her predominantly for Arena then you can adjust her runes to maximize on her critical rate leader skill. Her CR leader skill is one of the highest CR leader skills in the game; however, it can only be used in the arena. I believe that ethna has more value to offer for Guild Wars, ToA and Necropolis; because of this I would recommend giving her adequate critical rate so she doesn’t have to be so reliant on her leader skill. Ethna’s damage multipliers and base speed allow to be easily speed tuned while putting out great numbers. Ethna is the ideal counter for the most commonly used DPS unit on Guild Wars in the game today (Theomars). If you do decide to use a slower built Ethna with more damage, I highly recommend using will to prevent Ethna from losing her first turn. The recent change of [Capture] from a single hit to a mufti-hitting skill (5) allows you to take advantage of this unit in a necro composition as multi-hitting units are recommended for safe clears.

1. Bernard, Galleon/Luer, Ethna – Glass Cannon Comp – great choice vs C3-G2 Guild Wars defenses that don’t take advantage of will runes. 2. Theomars, Orion, Ethna – Glass Cannon Comp – great choice for mid-late game dealing with sub 200 speed bruiser comps that have more than 1 threat. Orion can lock down a unit and provide a defense break for Theomars/Ethna to clean up. If Theomars takes out a unit on his turn Ethna can use Capture to deal massive damage with a high chance of stunning so that the end round Theomars and Ethna clear up the mess.]]>