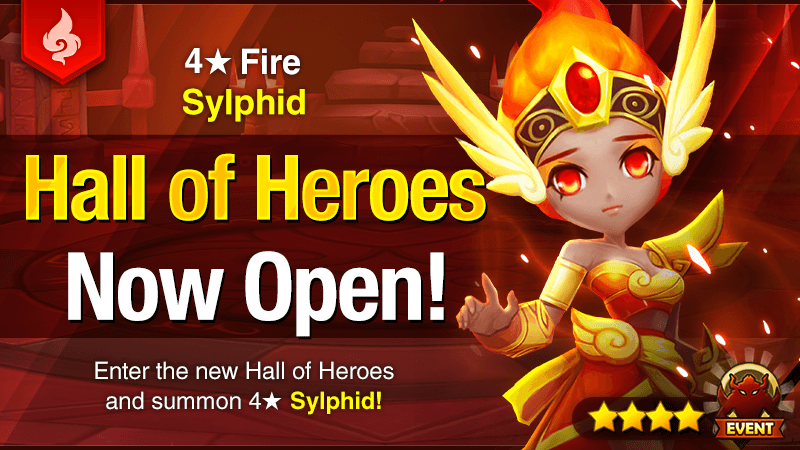 <![CDATA[On Wednesday, February the 12<sup>th, the Fria (fire Sylphid) Hall of Heroes was announced. Now, normally I’d be upset because Fria is trash, but I actually have an Icares who needs skillups, so I’m happy. Before we begin, Hall of Heroes is a lot like Trial of Ascension, so that means you can use Trial of Ascension strategy and monsters (e.g. attack bar pushbacks, stuns and continuous damage are king). I strongly advise bringing your regular Trial of Ascension team. In my case, I’m using Baretta (L), Charlotte, Rica, my Ice Mist Homunculus Kaneki, and Verad. Yeah, that’s right, folks, I have a Rica now!

No, she’s only good for Icares skillups. She does have her niche uses, say in the Wind Rift, but ultimately I can’t see myself ever using her genuinely while having other units that could be much better for the task. She’s not really that much to talk about; her passive skill Sacrifice will, upon her death, fully heal all her allies and remove all harmful effects from them. It’s really annoying to deal with in ToAH… 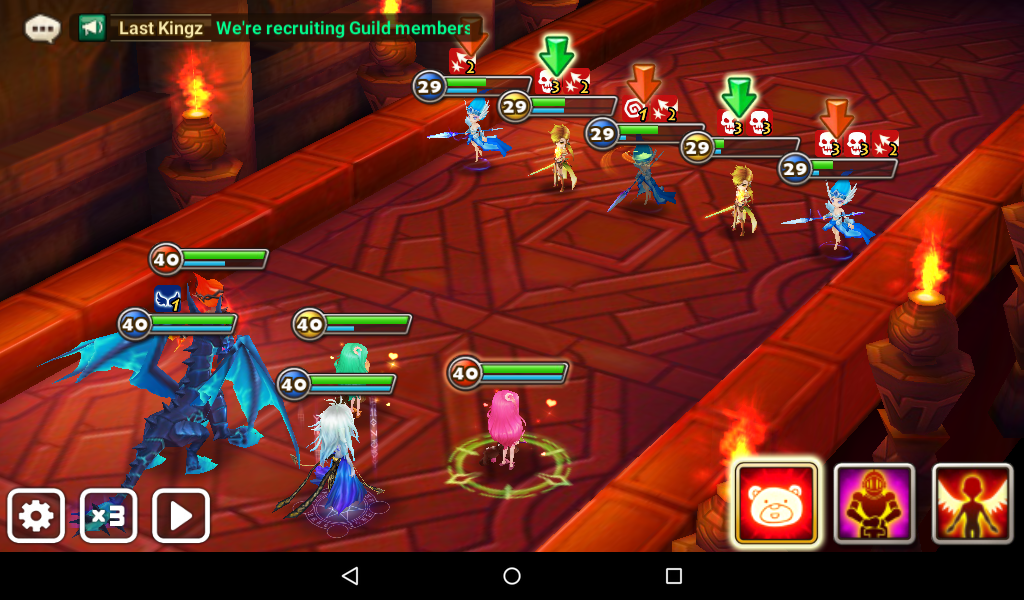 For some reason, the tablet I usually use to get screenshots for articles wouldn’t save any of my screenshots this time, so now I had to take all these on B4 (instead of B1) and on my Kindle Fire. But anyway, the first stage consists of three Lumirecias (water Sylphids) and two Lupinuses (wind Magic Knights) The Threat: So, because I actually did build a Lupinus long ago – for NB10 when I was first breaking into it – I can safely tell you that Lupinus is our main threat for damage. All three of her skills hit thrice, and two of them are AoE. The first skill attacks one enemy twice and then everyone else once, while granting the slowdown debuff on them. Her second skill singles out an enemy and Silences them, and her third is like an upgraded version of her first with it also being AoE, dealing damage proportionate to the enemy’s max HP and decreasing attack bars by 30% each. Fun fact: Apart from the Homunculus, the Magic Knights are the only monsters in the game whose first skill attacks all enemies! Anyway, Lumirecia was actually considered a beast long ago during the beginning of SW (she even solo’d DB10!) but now she’s just considered weak. Her third skill, Healing Breeze, removing all harmful effects off of a chosen ally and fully recovers their HP. In other words, it’s a single-target active version of Fria’s passive. The Solution: Definitely take out Lumirecia first. Because of her third skill COMPLETELY healing her target, she can strip all the stuns, Continuous Damage and whatnot off an ally and basically revert them back to the beginning. And if you’re unlucky, that ally will be a Lupinus who will then proceed to use her third skill on everyone and wipe your team out before you even hit Stage 2. I speak from experience. 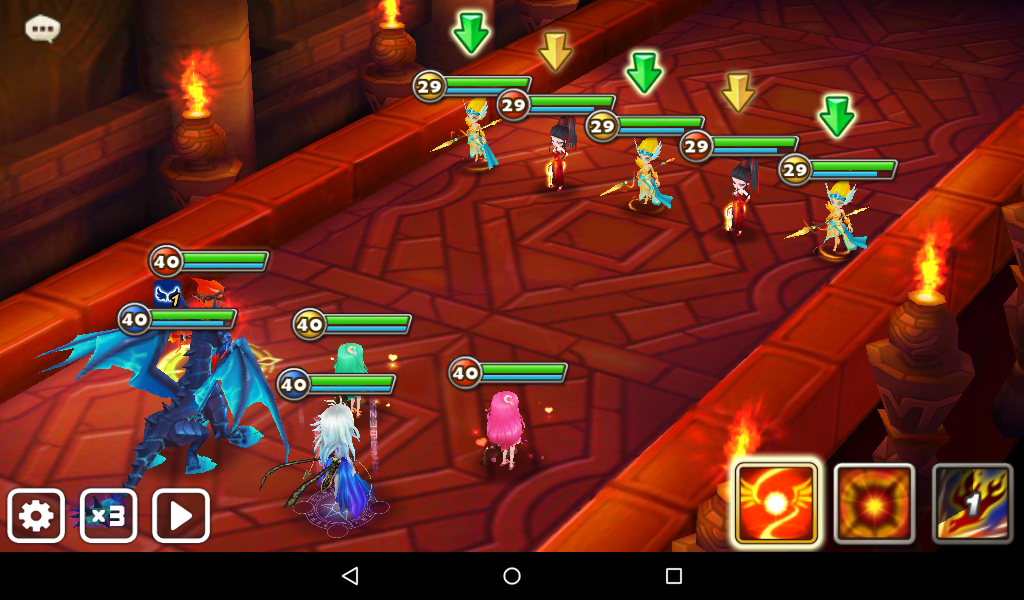 Okay, here we go to stage 2! This stage consists of three Acasises (wind Sylphids) and two Hwas (fire Rakshasas) The Threat: Uuuuugh, Acasis. I STILL don’t like dealing with them, and I’m… almost what you could consider a late-game player, but probably shouldn’t. Her third skill Force Field grants a shield around all her allies for 3 turns, and also decreases their chances to be hit with a Critical Hit. Hwa, meanwhile, has her passive of Burning Whip, which gives her a chance to attack again and also decreases attack bars. Though she got her passive nerfed so attack bar reduction doesn’t land on a critical hit, it’s still annoying. Would not recommend. The Solution: Definitely go for Acasis first. Do you know how annoying it is to deal with her? Once acasis is dead, you can take out Hwa without much of a worry afterwards, because at least now the damage she receives won’t be absorbed by a shield. 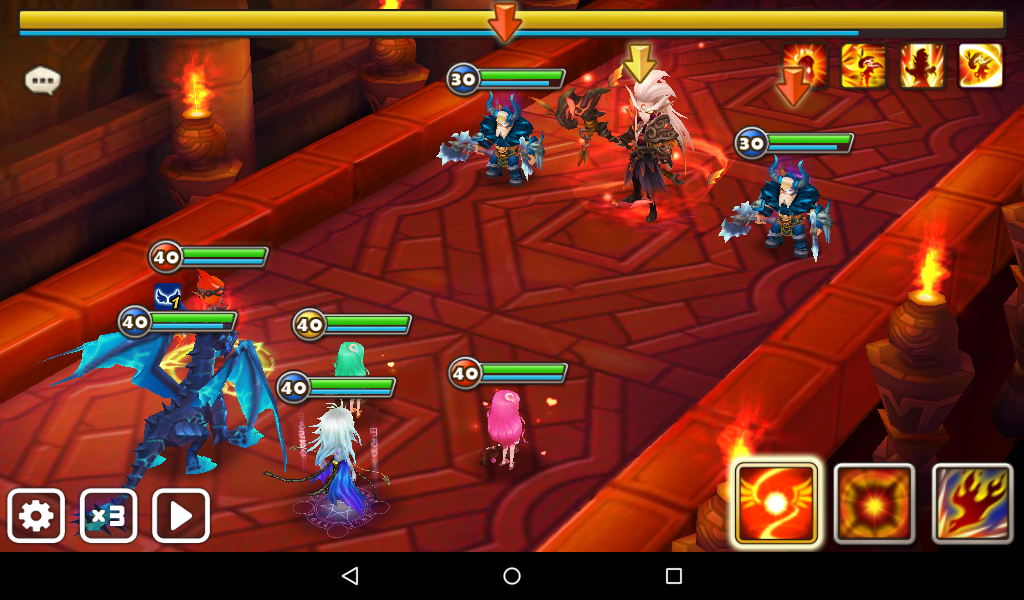 We’re facing off against the miniboss now! Our miniboss consists of Bellenus (fire Druid) and two Aegirs (water Barbaric Kings). The Threat: Wow, this whole miniboss is a big ol’ threat. Aegir’s known for his wrath in RTA because he’s a relatively easy to get unit who can singlehandedly turn cycle your units and completely lock them down. It’s mostly because of his third skill Confiscate, which attacks one enemy twice, stealing one buff off of them with each attack. However, if they have no buffs, he’ll absorb their attack bar by 50% per hit. And then there’s Bellenus. They came along before the Cannon Girls and Beast Riders did, so they were actually the first monster family to have three skills and a passive. He was actually considered “meh” for a while, but then the Druids got a couple buffs, Taranys became OP and Bellenus actually rocketed to B+-A+ tier. His third skill attacks all enemies, weakening their attack power. On top of that, if he uses this skill in Druid form, he’ll provoke all those enemies for 2 turns, weaken their defense, and transform into Beast Form. It’s really OP. The Solution: Well, since you don’t have to kill the lackeys anymore, you can easily just aim for Bellenus and be done with it. However, if you do feel intimidated by the Aegirs, feel free to take care of them ahead of time so that they won’t become much a problem for you. 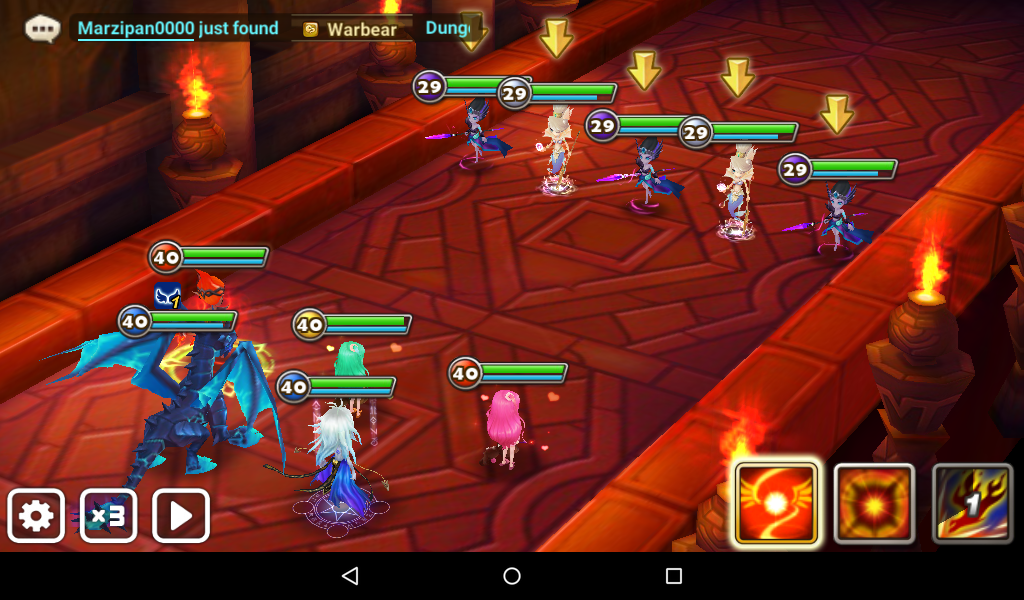 So I can actually attest to this stage with experience, because as I’ve mentioned, I have an Icares of my own! Here, we have three Icareses (dark Sylphids) and two Mollys (light Mermaids). The Threat: Icares is a total threat here, and you’re gonna learn why. You see, her third skill will deal damage on an enemy, and the damage is equivalent to half her Max HP (keep in mind she heals herself as she does this damage). However, if the enemy dies she instantly gains another turn. As such, Mo Long and Icares combos are quite powerful together. Molly, meanwhile, has sorta fallen out of the meta, but she’s still quite strong, because her third skill Glaring Mists will cause one of her allies to have a higher chance of having attacks on them land as Glancing Hits, and she’ll also heal an ally by 10% each turn. I actually kind of want a Molly. The Solution: DEFINITELY go for Icares first. If you know you can’t kill her in the first turn, then at least bring someone who can destroy Max HP, so that her third skill deals less damage. Molly isn’t much of a threat damage-wise, but it’s still wise to watch out for her so that your 100% Crit Rate Verdehile doesn’t suddenly start landing glancing hits for no reason. 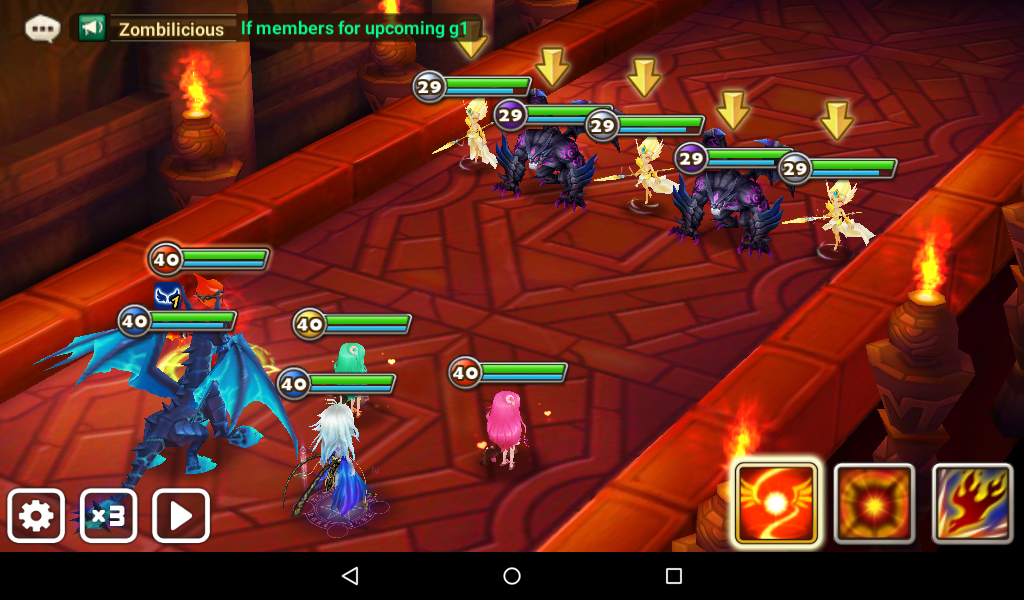 It’s the final stage before the boss, baby! Here, we have three Mihaels (light Sylphids) and two Onyxes (dark Gargoyles). The Threat: Ugh, ONYX. I despised fighting him every step of the way, and so should you. His passive skill, Statue of Immortal, gives him a 30% chance to be turned into a statue after his turn ends. When he’s in his statue form, he cannot be defeated. His second skill also turns him into a statue too, so that makes it even worse if you brought a passive attack bar decreaser like Loren. Mihael also happens to be a really good healer, too. Her third skill, Blessing of the Wind, heals everyone for 30% of their HP and also raises their defense for 2 turns. It’s super annoying to deal with. The Solution: Onyx can’t be a statue if he never gets a turn. Finger-tap meme. But seriously, if you just burst down Onyx, you’ll be mostly worry-free. Mihael can’t really do much damage-wise, so you won’t have to worry about her. 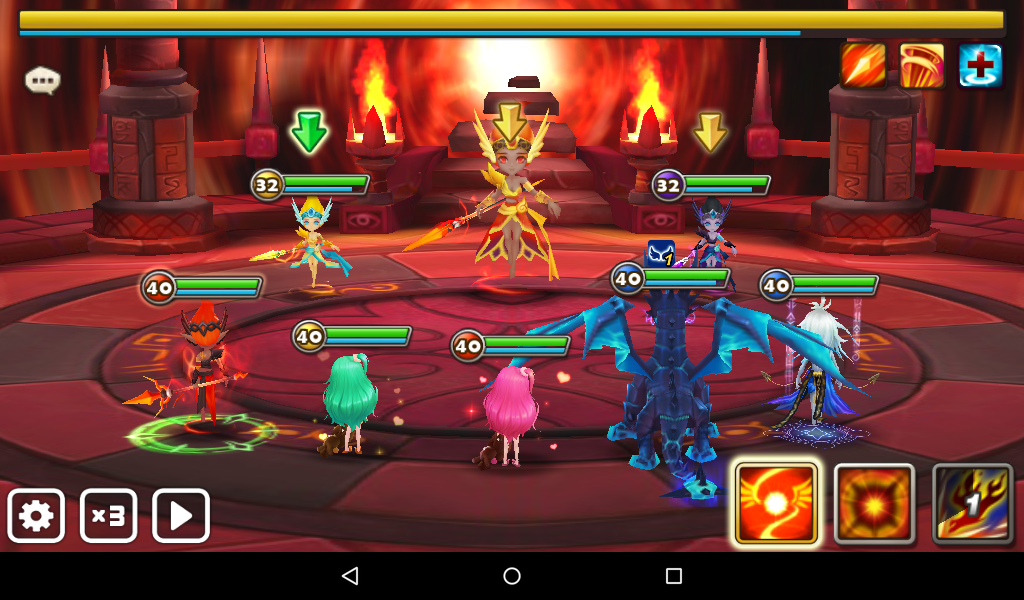 It’s tiiiiime to face Fria herself! Good news – you don’t have to kill her lackeys after killing Fria, so you won’t have to trigger her passive and then deal with her lackeys. I can’t remember if her passive actually does trigger after dying here, but either way you won’t have to worry. The Threat: Anyway, boss levels are usually the easiest to deal with because you just have to burst your way through the boss and don’t have to worry about the lackeys. The threat here differs because the lackeys will always differ. So, in this example, Fria’s lackeys are Acasis and Icares. I can’t speak for B1, because I don’t remember it. The Solution: Like the threat, the solution becomes different based on who the lackeys are. In this case, though, I’d take out Icares, stun Acasis, and then just completely annihilate Fria, because she can’t trigger her passive. I hope you all enjoyed this Hall of Heroes article, because I certainly enjoyed writing it! How far did you get this round? Let me know in the comments down below! In the meantime, I’m Sara Ann, and I’ll see you in the next article!]]>