<![CDATA[With this new Hall of Heroes, announced on February the 7<sup>th, I can finally tell my favorite SW joke of all time: “I’m so glad it’s a Phantom Thief Hall of Heroes. My Galluer needs skillups.” It’s been, what, 34 months since we’ve had a Phantom Thief Hall of Heroes? I don’t know why Com2uS didn’t do it sooner; they’re all prime Hall of Heroes candidates. The best of them is Luer and even he’s someone you’d instantly replace once you get Galleon. Of course, I do not have a Galleon, so I am unfortunately stuck with Luer. Before we begin, Hall of Heroes is a lot like Trial of Ascension, so that means you can use Hall of Heroes strategy and monsters (e.g. attack bar pushbacks, stuns and continuous damage are king). I strongly advise bringing your regular Trial of Ascension team. In my case, I’m using Baretta (L), Belladeon, Frigate, Veromos, and Charlotte. Let’s cut the chatter and get on with it!

Ha. Hahahahahahaha. Aaaaahahahahaha. That’s a good one. There’s a reason why I said that all Phantom Thieves are prime Hall of Heroes candidates. That’s because they’re all utterly terrible. Jean is trying desperately to be a fire nuker but his skillset requires him to be tanky, Luer is a budget Galleon, Julien is trying to be a nuker too but is more of a stunner unit and his third skill has a ridiculous cooltime and doesn’t even have attack bar pushback unlike the best gurl Charlotte, Guillaume is just weird, and Louis is a budget Chloe but is rarer and slower than her! It’s ridiculous, Com2uS! #BUFFPHANTOMTHIEVES #GIVEMECHIWU #ISTILLLOVEYOUTHO Alright, now that I got that rant out, I’m gonna briefly go over Louis’s third skill, Illusion Magic – the main reason why we all say he sucks and that all Phantom Thieves deserve a buff, but mostly Louis: “The HP ratio of you and the target ally will be evened and both will become invincible for 2 turns. (Reusable in 8 turns)” When fully skilled up, this is six turns. This would be decent if Louis had something else with his third; like, say, an all harmful effect on all allies removal. Unfortunately that is not the case. You can say that he’s a pretty good source of single-target invincibility for Katarina, but remember that Chloe and Qebehsenuef exist too – Chloe is faster, and Qebesenuef is free. Overall I don’t recommend building a Louis, but keep a copy just in case he gets buffed. 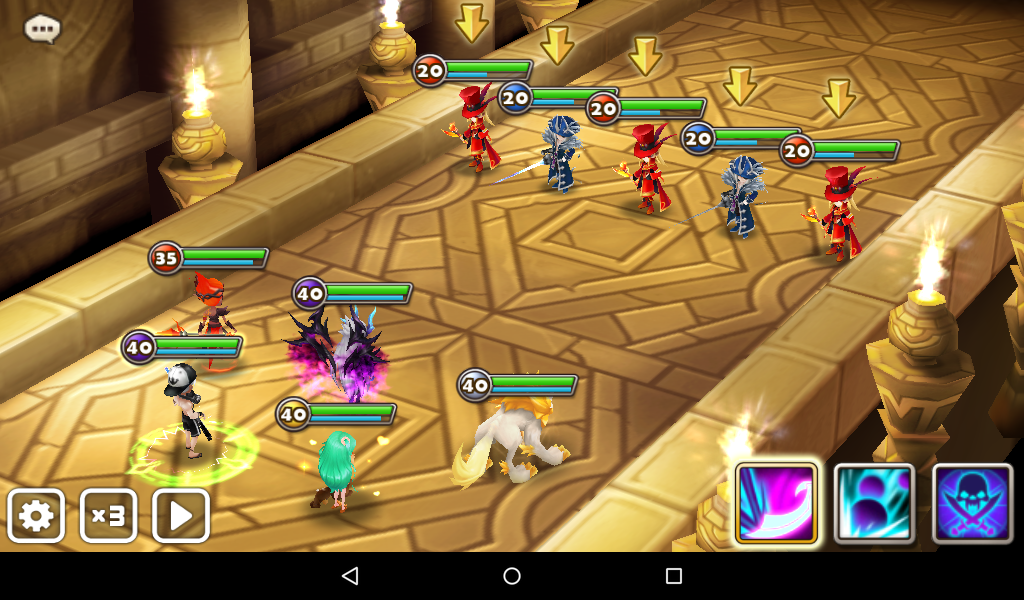 -insert pirate joke here- Welcome to Hall of Heroes. Here, all your dreams are shattered because we’re asking for somewhat decent monsters this Hall of Heroes but Com2uS only wants to give us people like Louis. How tragic. This stage consists of three Jeans (fire Phantom Thieves) and two Galleons (water Pirate Captains) The Threat: The main threat is when Galleon uses Time to Loot – and actually does loot – and then Jean attacks the defense-broken monster. Jean is actually a pretty good nuker monster when he’s in the upper stages of Hall of Heroes. His passive skill, Old Grudge, says that his attack power is doubled when his HP is higher than 50%. Remember that, when six-starred and maxed out his base attack is 889. Galleon is seriously a threat here. This is why people call him the absolute best of the Pirate Captains: Not only does he have an AoE defense break, but will buff the attack of all allies, allowing even more damage on your monsters. Combine a defense break and attack buff with Jean’s passive and you could be looking at getting one of your core monsters one-shotted. Thankfully, there are no healers or Immunity buffers, so you don’t have to worry about buff stripping here. The Solution: Take out Galleon first. Without Galleon, your monsters can’t be defense broken and the enemy’s attack power cannot be increased. If you can, I’d recommend keeping Jean at 49% or lower HP if you’re having problems with Galleon. This way, Jean won’t do as much damage as he usually would while you focus on the pirate bois. I’d also recommend bringing a speedy cleanser too. If you’re unlucky and Galleon doesn’t miss the loot on everyone, you could hopefully cut in between the Jeans and cleanse your teammates. Someone like Veromos or Lisa would do wonders here. 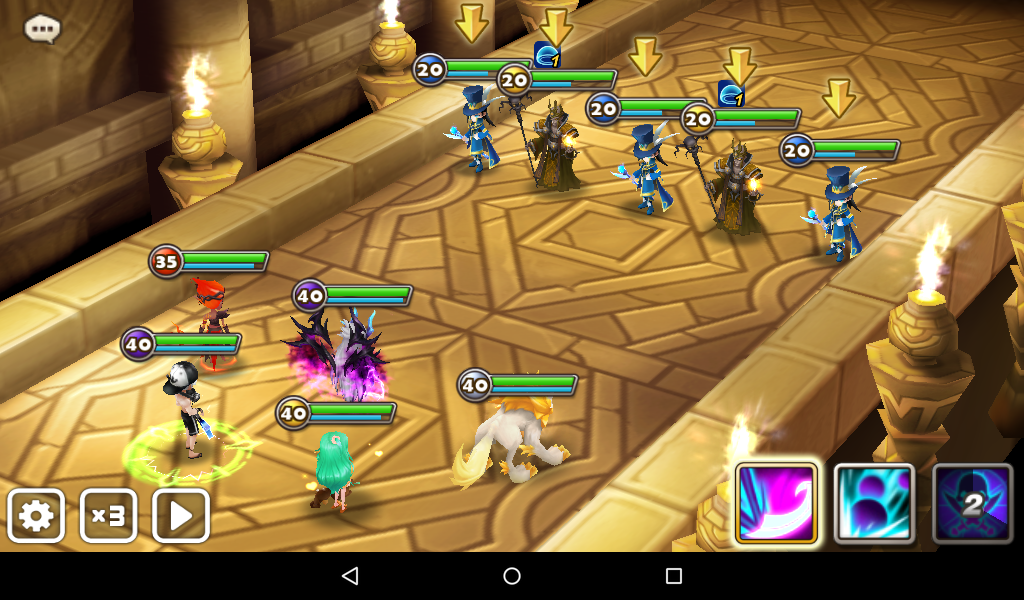 I find it strange that Luer is a Phantom Thief but all of his skill names sound more like something for a police officer. I mean, Scene of the Crime and Arrest alone sound like skill names for a police-type monster. Stage two is where you need nukers or buff strippers. Here, we have three Luers (budget Galleons – I mean water Phantom Thieves) and two Fucos (wind Liches) The Threat: Luer does really good as a budget Galleon – meaning you’ve stepped out of one Galleon stage and walked right into another. Though he isn’t as good as everyone’s favorite blue captain, he’s still viable in himself. He also has an AoE defense break, but he also decreases everyone’s attack bars by 50% and will always attack with a crushing hit – regardless of the element of whoever’s getting attacked. This is all in one skill, too! Fuco is also a really good Lich. His passive skill generates a shield that’s proportionate to his level (4000 HP at level 40) and, if hit with his shield on, will inflict a slowdown debuff to whoever hits him. Top this off with his second skill, which will stun monsters with the slowdown debuff on, and you’re in for one heck of a ride. However, I suppose the one thing to be glad about is that the Fucos aren’t Halphas’. The Solution: Cleansers, cleansers, cleansers. I sincerely hope you’ve taken a Veromos with you, because in nearly every stage you’re going to need him. I’d recommend going for the Luers first. His defense break and attack bar decrease can be very annoying, and of course cause the damage you receive to be intensified tenfold. Fuco’s shield is pretty easy to break. A single-target nuker could easily take out the shield and he’ll be left vulnerable; leaving you to chip away at his HP until you advance on to the next stage. However, I also recommend you either cleanse the slowdowns on you before he uses Deadly Touch or nuke him even before he can use it. Veromos can’t cleanse stun, sleep or freeze, so if he’s your cleanser you’re in trouble, buddy. Once you get Fuco’s shield broken, try and break his defense, too. I’m not too sure how well Continuous Damage would work against him (his shield could activate before they take place), as it’s been a while, but I’d still recommend it, just in case I’m wrong. And hey, you can use Continuous Damage to make quick work of the Luers. 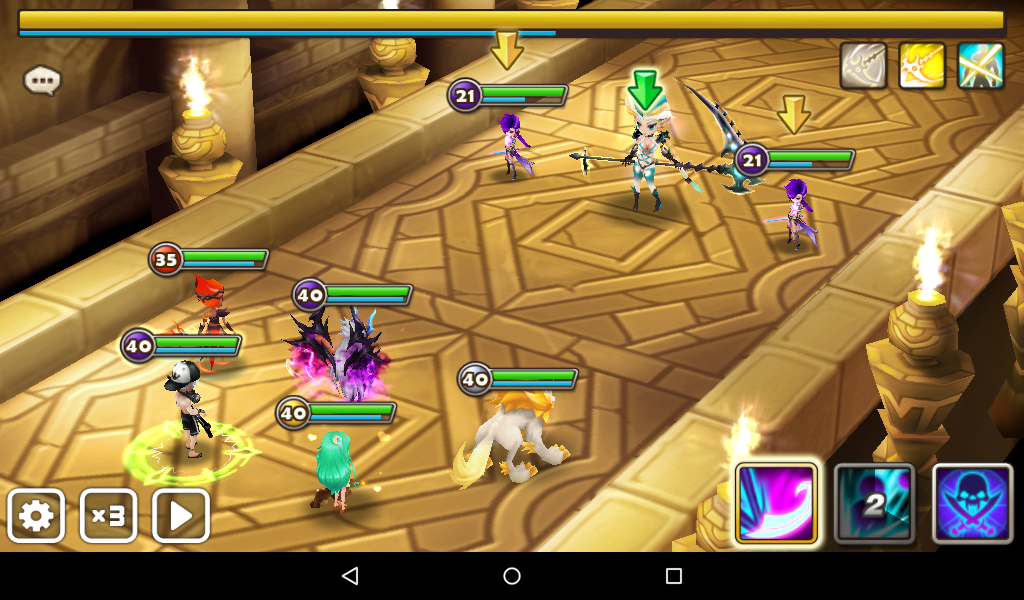 Move over Gravity Falls; Gravity Shot is where it’s really at! Miniboss time! The boss is Asima (light Hell Lady) and two Lanetts (dark Magic Knights) Do you even understand how much I want a Lanett, because I really really REALLY want a Lanett. The Threat: Lanett’s third skill really brings a problem. The third skill, Gravity Shot, inflicts a single-target nuke based off of the enemy’s Max HP. Then, all allies will also be healed by 30% of the damage done. Let’s also throw out that her second skill will inflict four Defense Breaks if you’re unlucky, and her first skill is AoE and can inflict Continuous Damage with each hit. Let’s also talk about Asima. Because of her, I’d call this miniboss stage the Continuous Damage stage. Each of her skills inflicts at least one Continuous Damage. Her third skill Crumble attacks all enemies and will also inflict two-turn Defense Break (sound familiar?) and a Continuous Damage for each of the three hits. Her second skill, Gouge, attacks all enemies, inflicts a Continuous Damage each hit, and the damage increases by 50% with each Continuous Damage effect on the enemy. Continuous Damage don’t even sound like words anymore; let’s just call it DoT from now on. The Solution: I’d recommend going for Lanett first. This way, neither of them if dead/stunned can use Gravity Shot; her best skill. However, Unrecoverable would also do the trick. Then, you can focus on Asima. She’s pretty squishy too, so you can easily get rid of her. And, of course, take a cleanser. If you can’t kill her in time, she’ll be inflicting DoTs for days. 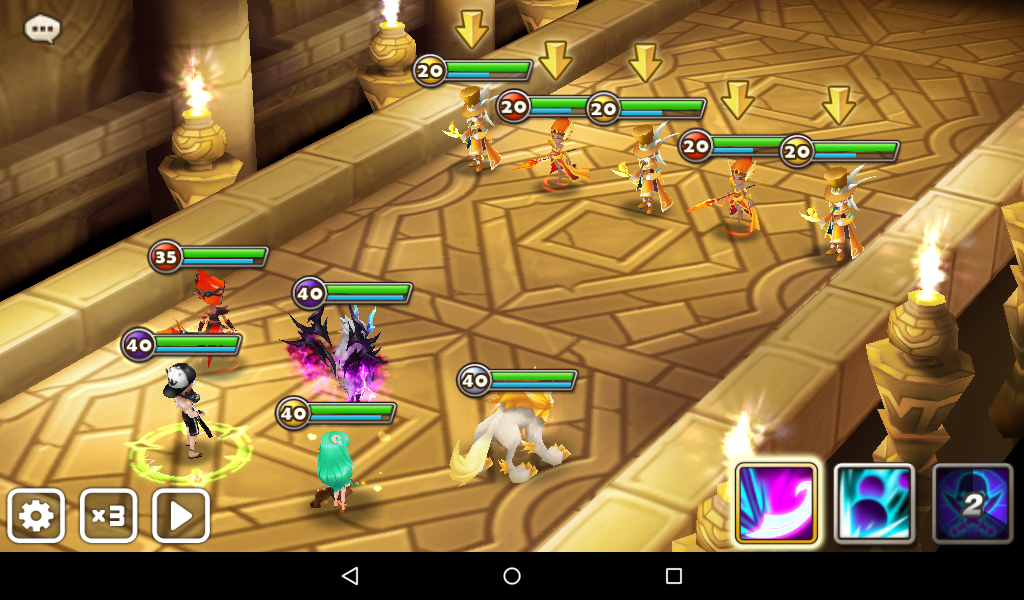 It’s Showtime, baby! You’re more than halfway done with this stage of Hall of Heroes now! Floor 4 consists of three Juliens (wind Phantom Thieves) and two Frias (fire Sylphids). For once, this stage doesn’t have any defense breaks, but it does have stuns and passive heals. The Threat: Julien recently got buffed so that the stun rate on his third skill went up from 10% to 30%. He still sucks. Fria, on the other hand, is going to be a total annoyance. Her second skill increases the attack bar of all her allies and her passive skill decreases attack bars of people that she hit. However, the main part of her passive is that when she dies, she’ll heal and cleanse all allies of all harmful and inability effects. The heal will instantly get them up to 100%. The Solution: Take out Fria before you do anything else. If you work on Julien and then kill Fria, then all of your progress will be erased. Julien won’t be much of a threat, albeit the stuns that he inflicts are very annoying. Prioritize Fria. 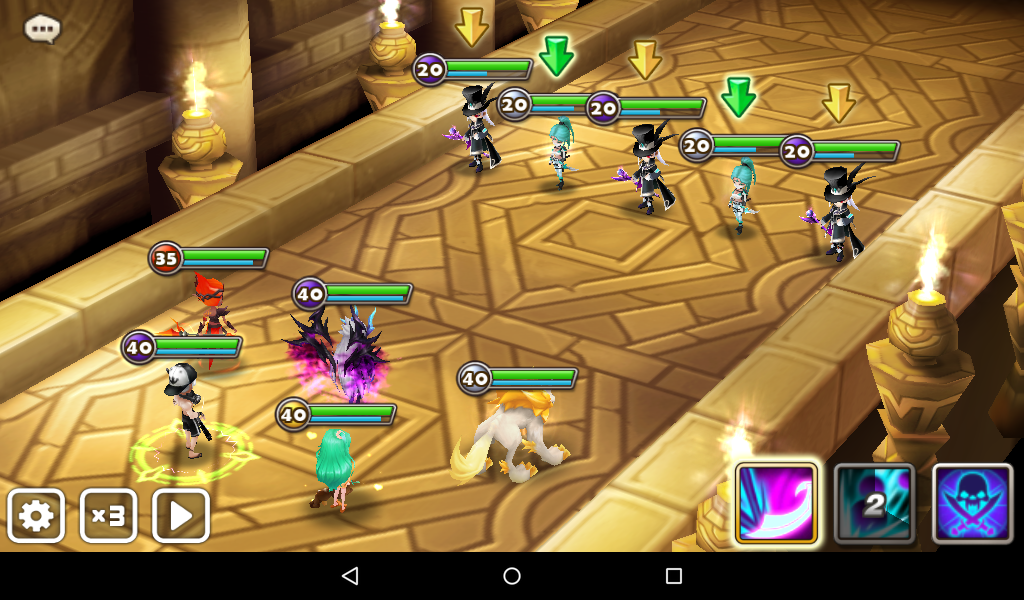 My Elaborate Plan to get you all up to at least B4 of Hall of Heroes is almost complete! In this stage, you got two Natalies (light Assassins) and three Guillaumes (dark Phantom Thieves) The Threat: Guillaume’s passive increases his Critical Damage by 50% and decreases his chances of getting hit by a critical hit by 50%; meaning Verdehile has a 50% smaller chance to trigger his passive if hitting a Guillaume. Natalie’s third skill, Silent Reaper, will attack an enemy and Silence them. If that enemy dies, then everyone else is silenced. The Solution: Go for Natalie first. She can easily oneshot your squishier monsters and Silence the rest of the team. If you have Verdehile in your team, direct his attacks towards one of the Natalies if you haven’t killed all the Guillaumes first. 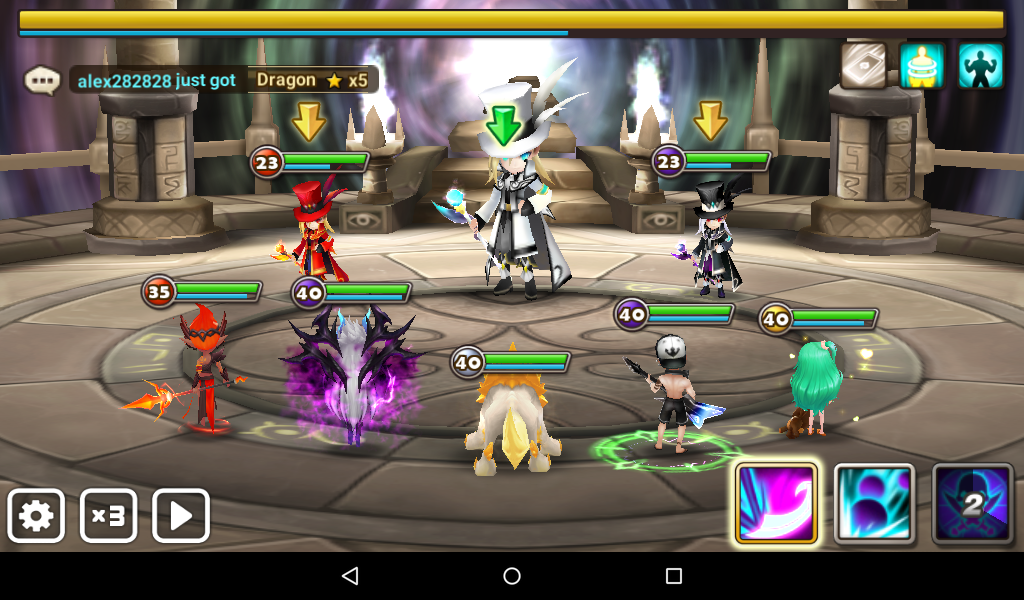 No more bad jokes, I swear. Instead, let’s all give alex282828 the “gz” and “lucky you” he deserves. We’re finally at the boss stage now. Here is where we have the most variety out of all the Hall of Heroes stages. Louis’s lackeys will change at every stage. As we can see here, though, he has a Jean and a Guillaume by his side. The Threat: The threat varies based on who the lackeys are. In this case, I’d say that the biggest threat here is Jean. Of course, make sure that Louis doesn’t get a turn, either. If you’re working on killing a certain monster, he’ll use Illusion Magic, casting invincibility on the both of them. The Solution:  Take out the biggest threat first. For example, if it’s Jean, Louis and Luer, go for Luer first. Overall, this is a pretty easy Hall of Heroes; there’s no Immunity or major healers.]]>