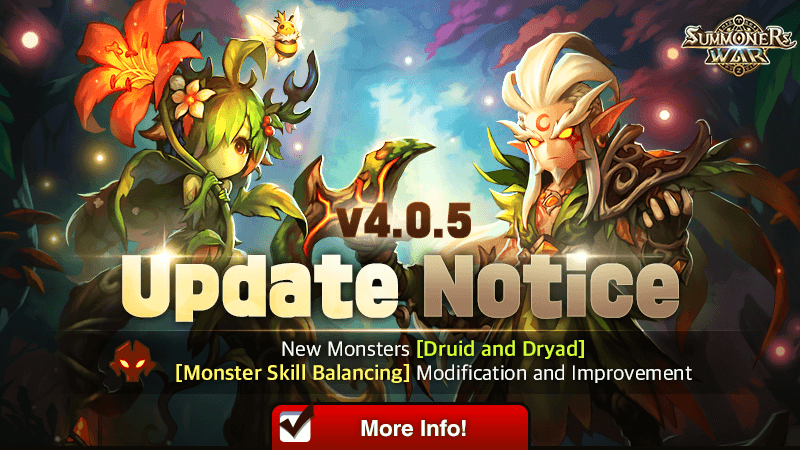 <![CDATA[Today, on August the 31<sup>st, Update 4.0.5, not only did we did a pretty decent balance patch, but two new monsters were released – the Druids and the Dryads! The Druids are five-star monsters who are basically Unicorn 2.0, and the Dryads are four-star monsters who call upon nature to help attack, heal and support. In this article, we’re going to look at the Dryads, and in the next article, we’ll look at the Druids! With that, let’s begin! Disclaimer: As of this writing. I do not own any of the Dryads, nor am I factoring in multipliers or skills when fully skilled up. 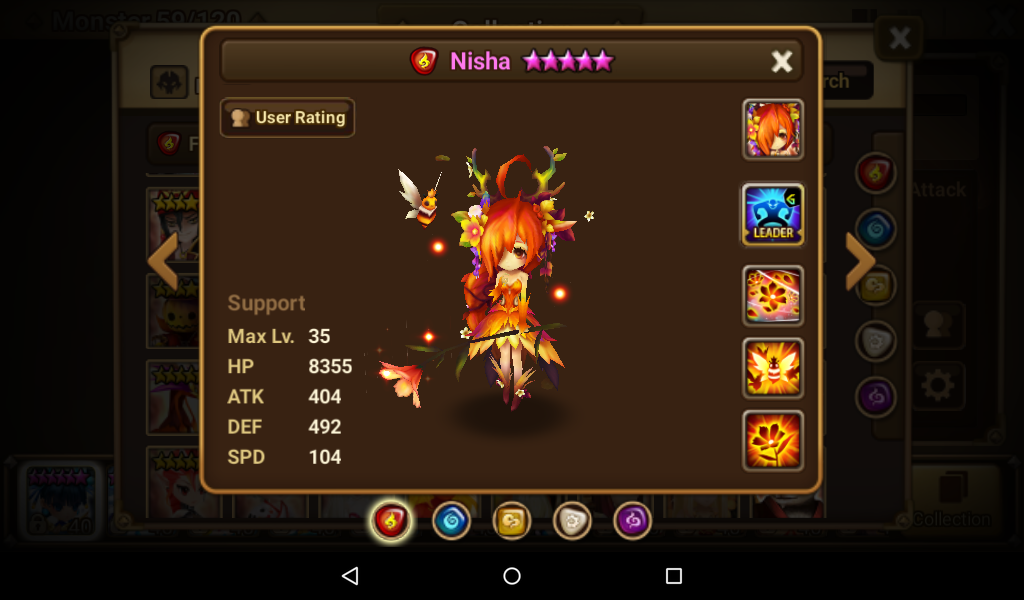 AAAAAA THE DRYAD ICONS ARE SO CUTE – ahem. Flower Growing: Attacks an enemy and absorbs the attack bar by 15% with a 50% chance. Underwhelming first skill, to be honest. The attack bar absorption is really nice, though I feel like there could be just one more effect possibly added to this first skill. Perhaps a DoT? Honey Bee Friends: Honey bees will take away all harmful effects granted on the allies to the target enemy. If the allies don’t have any harmful effect, all allies will recover their HP by 10%. (Reusable in 4 turns) okay, so, like, is no one going to mention how overpowered Honey Bee Friends is? Seriously, it’s a complete AoE cleanse of all of her teammates, and the harmful effects get transferred onto a chosen enemy, and on top of all that, if an ally doesn’t have a harmful effect, all allies will be healed by 10%. I’m not sure if the healing stacks up (e.g. if all five allies don’t have any harmful effects on them, will they be healed by 50%?) Even if it doesn’t stack up, the Honey Bee Friends second skill is still super over-powered, and I love it so much. It’s definitely the better of the two kinds of second skills the Dryads have. Flower Fog: Attacks all enemies and blocks beneficial effects for 1 turn. (Reusable in 5 turns) …Ehhh… This still isn’t too good, to be honest. I mean, two-turn beneficial effect blocking is great. Megan the water Mystic Witch has a single-target strip and then applies buff block, so I was hoping that Nisha was like that. Unfortunately, no. Just one-turn AoE buff block. Author’s Opinion: Nisha is okay, I guess, but she’s not the best of the Dryads; if anything, she’s the worst. If I had to rank them all from first place to fifth (fifth being worst), Nisha would be at dead last. I rate Nisha at 6/10. Put her on Despair + Focus, SPD/HP%/ACC%. 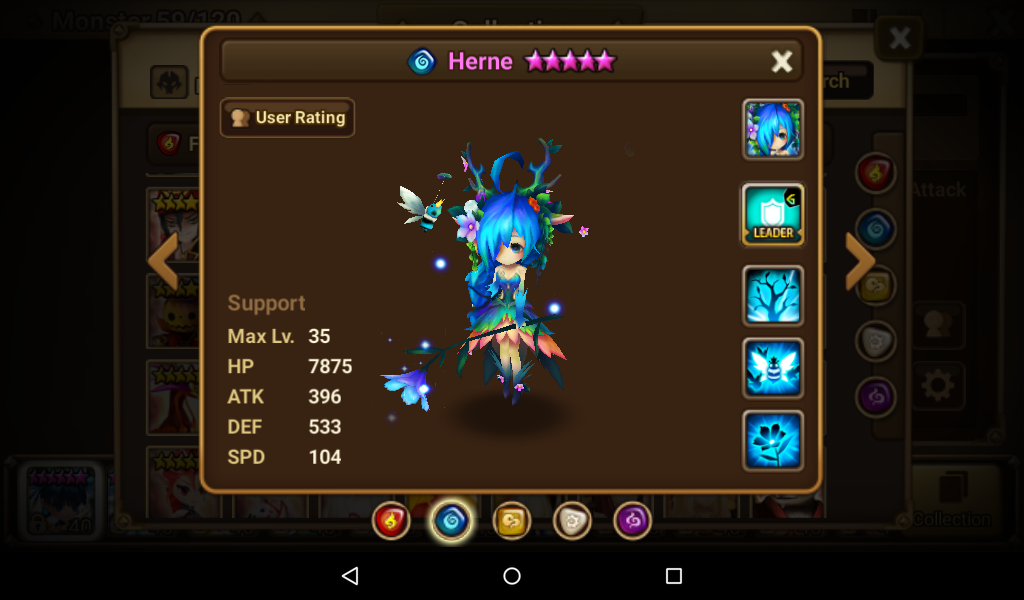 Herne may be my favorite of the Dryads, and you’ll see why when we cover her skills. Flower Growing: Attacks an enemy and absorbs the Attack Bar by 15% with a 50% chance. Same first skill; nothing new to report. Honey Bee Friends: Honey bees will take away all harmful effects granted on the allies to the target enemy. If the allies don’t have any harmful effect, all allies will recover their HP by 10%. (Reusable in 4 turns) Herne is already really decent, just because she has this second skill. I really love Honey Bee Friends because of how it seems so overpowered that it should be a third skill and not a second. Tree of Loss: Attacks an enemy to decrease the Attack Bar by 50% and puts the target in Oblivion state for 2 turns. Passive skills aren’t activated in Oblivion state. (Reusable in 5 turns) This skill. This skill right here is why I love Herne so much. Did you know that Herne’s the first four-star monster to come with Oblivion? It’s true – she’s the third monster who brings Oblivion as well. The other two are Tesarion (fire Ifrit) and Isis (light Desert Queen). Not only is the 50% attack bar decrease really nice, but now we have a solution to all the monsters with annoying passives in 4-star Siege Towers! Oblivion is one of the best debuffs out there because of its ability to block passives. Oh, the enemy Rina won’t stop activating her passive and shielding herself? Don’t worry; just bring Herne and use Tree of Loss on Rina! It’ll hopefully land Oblivion, which means you’re free to hit Rina with as many Critical Hits as you want until the Oblivion runs out. But still; getting two turns of free hits on any annoying passive monster is great. Author’s Opinion: Herne is definitely one of the best (if not the best) Dryads. Solid 8/10, because her kit is loaded. She has the better second skill of the Dryads, and she comes with Oblivion! I’d rune her with Violent + Focus, SPD/HP%/ACC%. You want as much accuracy as possible in order to apply Oblivion onto a monster. 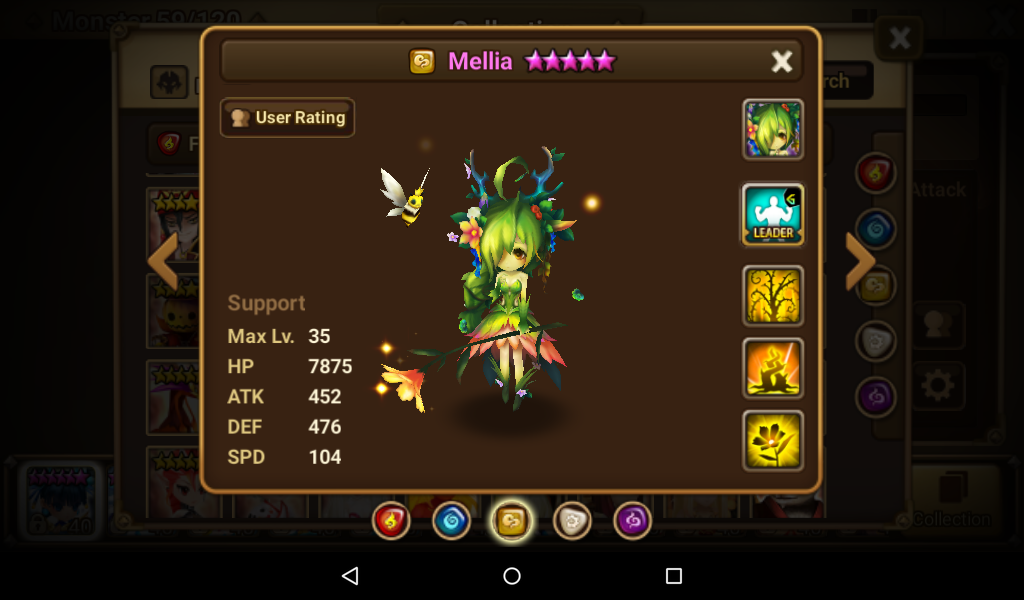 Flower Growing: Attacks an enemy and absorbs the Attack Bar by 15% with a 50% chance. Same old. Earth Friends: Attacks all enemies to decrease their Attack Speed for 2 turns with a 50% chance and their Attack Bar by 50%. (Reusable in 4 turns) So now we’ve gotten into “the other second skill” territory. I’m not saying that Earth Friends is bad. If anything, it’s pretty good. It’s just that, when compared to Honey Bee Friends, it’s…mediocre. If Honey Bee Friends had been weaker, this would’ve been seen as the better second skill, but am I complaining? Not really. I’m just saying that you shouldn’t hate on this second skill because it’s not as good as Honey Bee Friends. I’m fairly sure no second skill from a four-star is as good as Honey Bee Friends. Thorn Tree (Passive): Inflicts Continuous Damage on the target for 1 turn with every attack. [Automatic Effect] So this kind of seems like a weak passive skill. I mean, yeah, Continuous Damage and all, but it’s only for one turn, plus I’m fairly sure all of Mellia’s skills hit only once. However, her second skill combined with her passive does seem nice especially for Trial of Ascension – AoE attack bar decrease, attack speed decrease, and Continuous Damage. I’m fairly sure she’s a better version of Spectra if you look at her like that; the only downside is that she’s not nearly as fast as Spectra. Then again, Spectra has the highest base speed in the game (a whopping 126 speed!) so no one’s as fast as him. Author’s Opinion: She’s pretty good. I’d rate Mellia a 7/10, and I can definitely see people using her for Trial of Ascension or perhaps even a GB10 starter team. Because her second skill and her passive mesh pretty well, I’d rune her on Despair + Focus, SPD/HP%/ACC%. 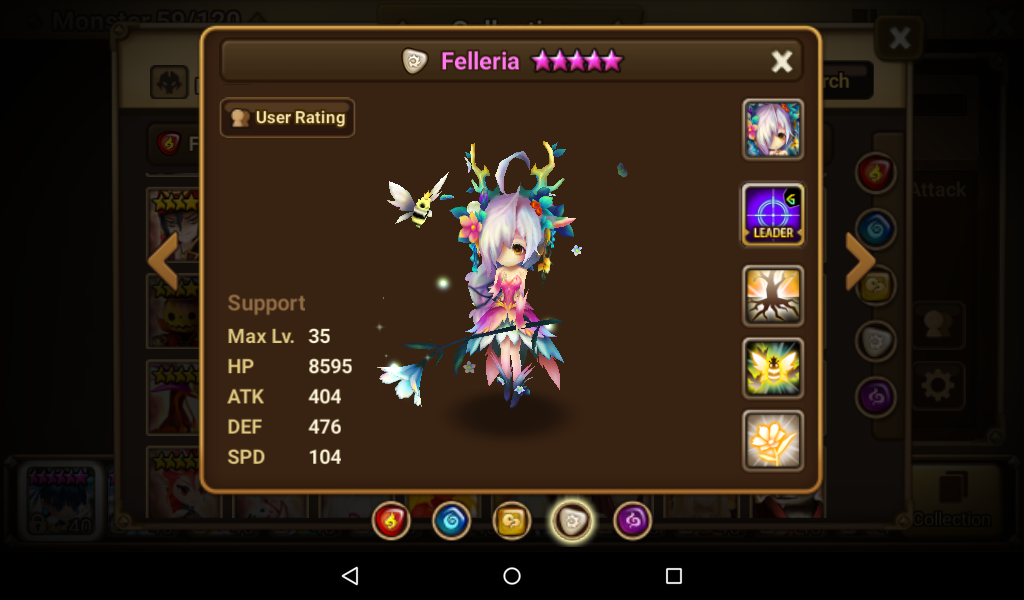 Why is it that the light versions of monsters are usually the cutest/prettiest? Seriously, we’ve had that with the last four monsters in the game – Paladins, Chakram Dancers, Boomerang Warriors, and now Dryads! Flower Growing: Attacks an enemy and absorbs the Attack Bar by 15% with a 50% chance. -insert witty comment here- Honey Bee Friends: Honey bees will take away all harmful effects granted on the allies to the target enemy. If the allies don’t have any harmful effect, all allies will recover their HP by 10%. (Reusable in 4 turns) Felleria has Honey Bee Friends. She’s already good. Deep Rooted Tree (Passive): Recovers HP of allies granted with harmful effects by 10% every turn. Creates a shield that’s equivalent to 10% of your HP on the allies with no harmful effects for 2 turns. [Automatic Effect] Felleria also has a decent passive skill! This also follows the “harmful effect/no harmful effect” pattern we’ve been seeing in the Dryads. Her passive activates every turn, probably before she uses any of her skills. This means that she can heal monsters with harmful effects, shield those without harmful effects, and then use Honey Bee Friends. Author’s Opinion: Felleria easily gets a 7.5/10. I love how well her passive works with her second skill. I’d rune Felleria on Violent + Energy; SPD/HP%/HP%. You want as much HP as you can get on her, because the shields she applies are 10% of her max HP. It would be really difficult, however, to get her to a point where her shields could block hard-hitting attacks, because you’d need 100,000 HP to get a 10,000 shield on her. That’s just not possible. 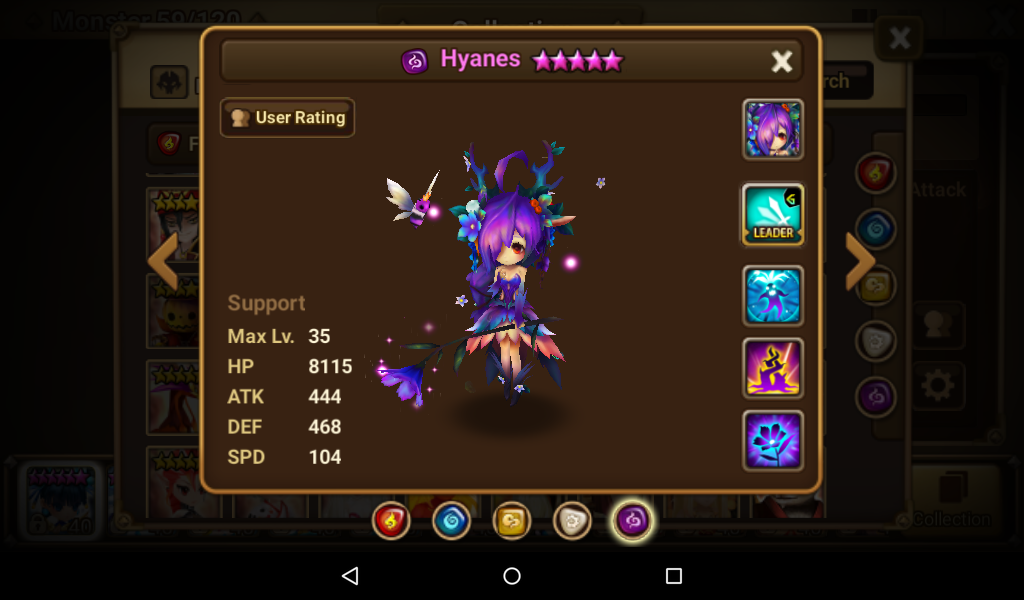 Flower Growing: Attacks an enemy and absorbs the Attack Bar by 15% with a 50% chance. -nothing to see here- Earth Friends: Attacks all enemies to decrease their Attack Speed for 2 turns with a 50% chance and their Attack Bar by 50%. (Reusable in 4 turns) Hyanes has the same second skill as Mellia. That’s all I can say here. Mandrake: Attacks all enemies to increase the enemies’ harmful effect duration by 1 turn and decrease the enemies’ beneficial effect duration by 1 turn. (Reusable in 5 turns) Now this third skill is pretty cool! She’s a bit like a budget Nyx, except she’s even better because of the beneficial effect reduction on the enemies. Author’s Opinion: Hyanes is a decent mon. I like her. Overall, I’d rate her a 7/10, because her third skill is kind of unique. I mean, yeah, there are monsters with harmful effect extension, but I don’t think I’ve ever seen monsters who decrease the time of enemies’ beneficial effects. I checked Nyx’s passive, and he just increases harmful effects. Anyway, I’d go Despair/Focus on Hyanes, SPD/HP%/HP%. Anyway, the Dryads turned out to be a really good family of monsters. The only monster who could be considered “weak” is Nisha, and even then she’s just underwhelming. Make sure to stay tuned for the first look on Druids! I’m Sara Ann, and I’ll see you in the next article!]]>