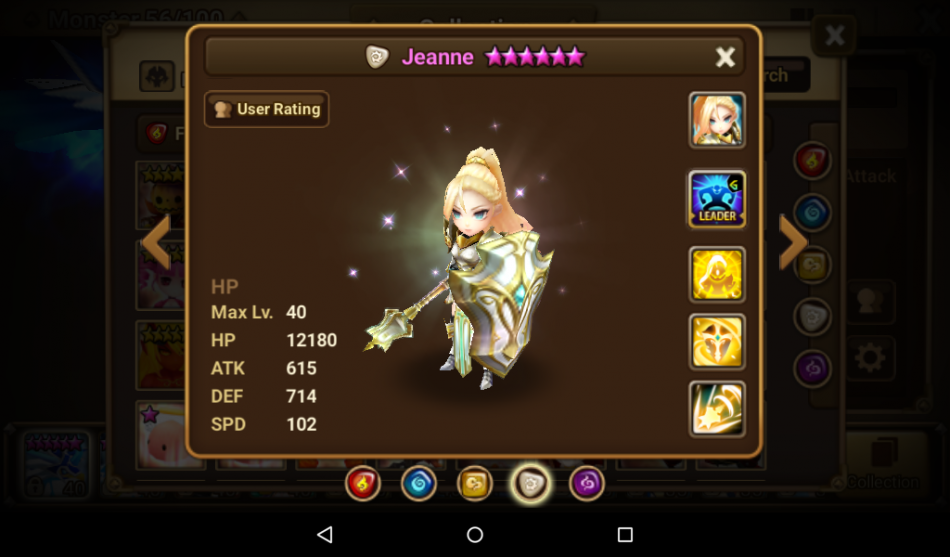 <![CDATA[Today, on September the 28<sup>th, 2017, Update 3.5.9 was released! Along with Lapis becoming OP now, we also won’t get fusion 5 stars from scrolls – say goodbye to all your worries about summoning Sigmarus, Xiong Fei, Katarina and now the new light Paladin, Jeanne! The biggest part of all this is the release of the light fusion and the new Paladin class! They’re a family of natural five-stars, mainly used as support monsters; provoking, cleansing and stunning. I’ve decided to do a first look on them all and add my opinions on their skills and where they could be used, so with that, let’s begin! Disclaimer: As of this writing, I do not own any of the Paladins, nor am I factoring in their multipliers or skills when fully skilled up. 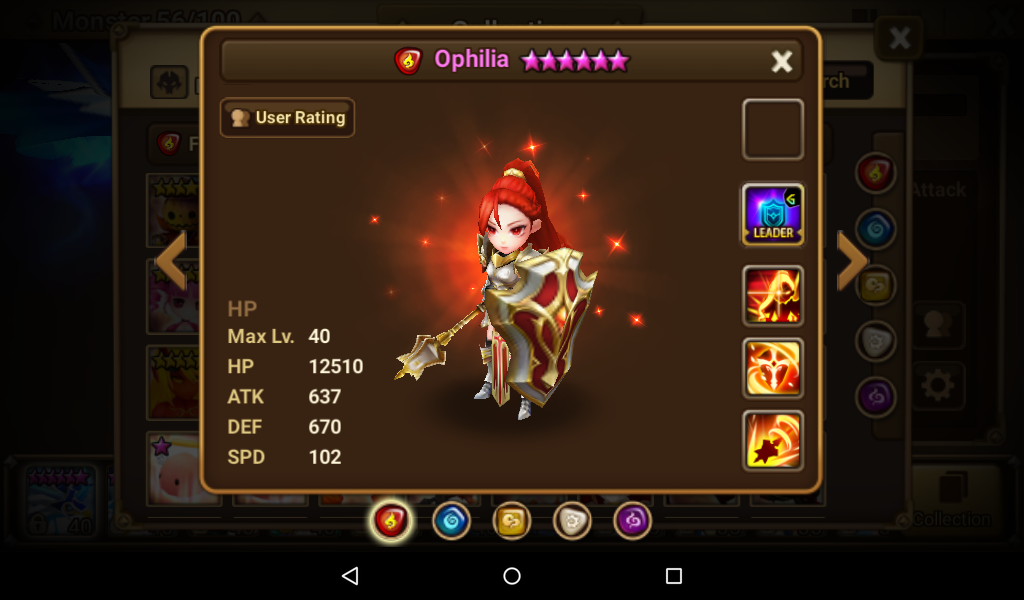 Justice Strike – Attacks the enemy and stuns them with a 15% chance. Boring first skill; it’s just raw attack power and a small chance to stun the enemy. Good thing this isn’t their permanent first skill, because all five Paladins’ awakening bonus is something new added to Justice Strike! Justice Strike (Awakened) – Attacks the enemy and stuns them with a 15% chance. You’ll gain Immunity for 1 turn afterwards. This attack deals more damage according to your max HP. I like how Ophilia’s new Justice Strike scales off of her max HP, but I don’t know how to feel about the 1-turn immunity. I mean, if you were to rune her with Violent and she gets an additional turn after this (and doesn’t use her first skill again) the immunity will wear off, leaving her vulnerable to attacks, defense breaks and stuns. Prayer of Protection – Removes all harmful effects on the ally and makes them invincible for 1 turn. Ooooh, Invincibility! I can already see people using Prayer of Protection Paladins with Katarina, whose third skill ignores defense once she’s invincible. While I have to say that 1-turn invincibility feels a little underpowered (as opposed to Chloe, who has 1-turn invincibility + 2-turn immunity or Icasha, with 3-turn invincibility) the complete harmful effect remove sounds great – although all Fairies with Purify as their second skill already do that. Cry of Threat – Creates a shield that’s proportionate to your HP for 2 turns on yourself and activates Threat state while the enemy attacks 3 times. The enemy can only attack the target under the Threat state when using the attack skill. Whoa, it’s a new harmful effect (I think)! The description is kind of confusing, but what I got from it is this: Author’s Opinion – Overall, I feel like she’s a pretty good monster. I can see people using her with Katarina in arena teams, or possibly in Trial of Ascension. I don’t really know what else to say about her, as I can’t really seem to see any uses for her other than arena or ToA. 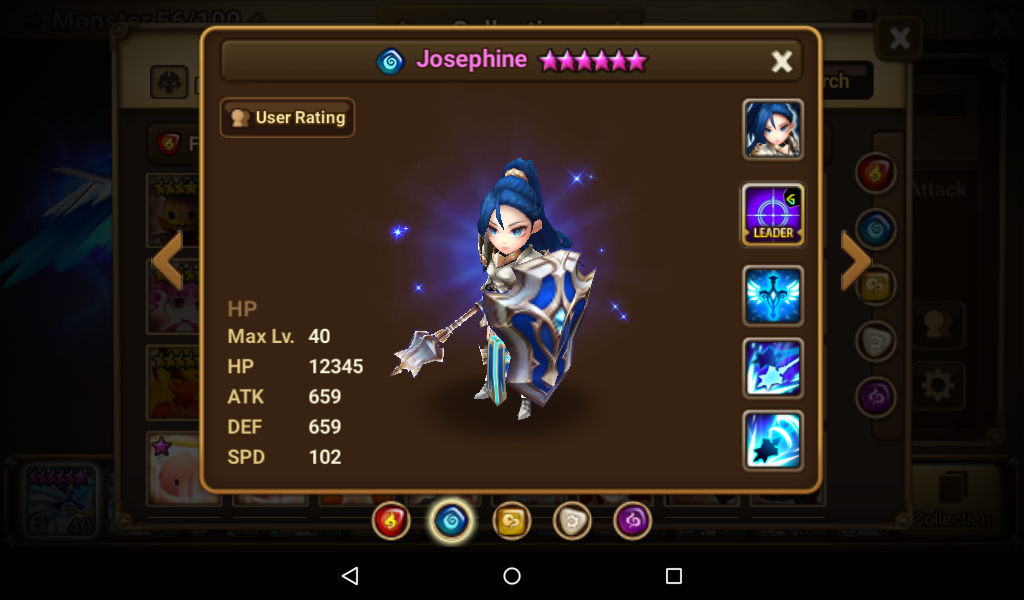 Justice Strike – Attacks the enemy and stuns them with a 15% chance. Again, not much to say about the unawakened Justice Strike. Justice Strike (Awakened) – Attacks the enemy and stuns them with a 35% chance. Your attack won’t land as Glancing Hits. Josephine’s first skill reminds you of Laika’s passive before he got buffed, am I right guys? …okay maybe you guys haven’t gotten over “the death of Laika” yet, I’m sorry, it was too soon. Fury of Punishment – Attacks the enemy 2 times to remove a beneficial effect with a 75% chance each and provokes the enemy for one turn. Fury of Punishment, in my opinion, is better than Prayer of Protection! 2-chance beneficial effect removal AND provoke? Heck yeah! Heavenly Blessing [Passive] – Removes all of the harmful effects on you when you’re under inability effects and creates a shield that’s proportionate to 20% of your HP on all allies for 2 turns. You’ll instantly recover a turn afterwards. Whoa, now this is one super overpowered passive skill! A complete self-cleanse a 2-turn AoE shield on her team AND a built in Violent proc, all of which will happen when she’s asleep, stunned or frozen? Sign me up! Author’s Opinion – Out of all the elemental Paladins, I think I like Josephine the most! I feel like Josephine could be a beast in Real Time Arena, like Amelia. She could also be great for new players if they’re lucky enough to summon her; I can see people using her as a +1 in their first GB10 team. Josephine could be a good unit in DB10, too – 2 chances at removing a beneficial effect, shield, not to mention she’s a water element! 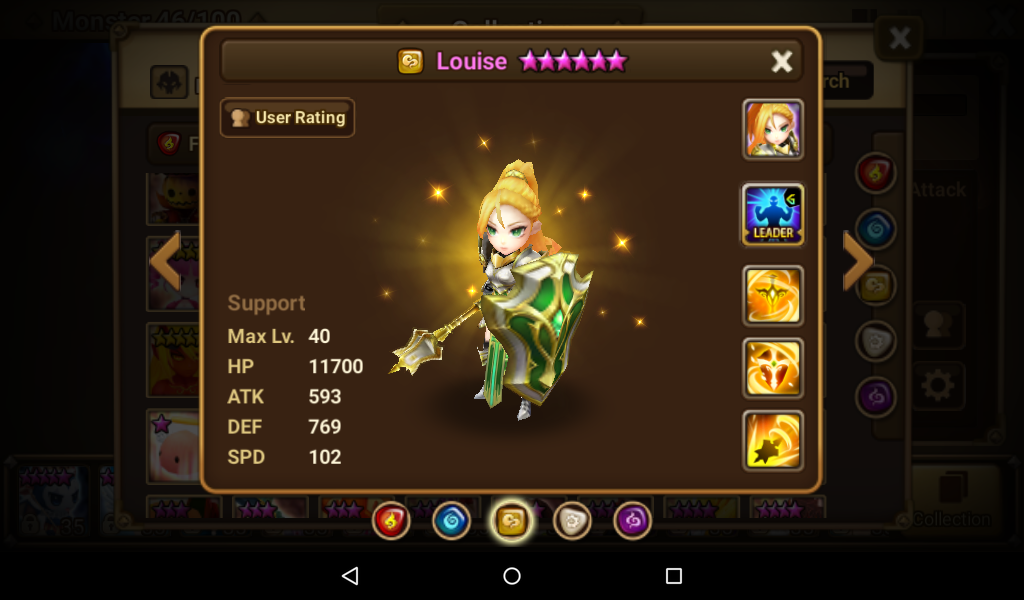 Justice Strike – Attacks the enemy and stuns them with a 15% chance. Nothing much to say about unawakened Justice Strike; it’s trash, boring, yadda yadda yadda. Moving on now! Justice Strike (Awakened) – Attacks the enemy and stuns them with a 15% chance. Decreases the attack bar by 30% with a 35% chance. Wow, Louise’s first skill has the same amount of attack bar decrease as one hit on Charlotte’s third skill! This may not seem like much, but when an attack bar decrease is on someone’s first skill instead of third (not to mention that Violent procs would be really useful here), that’s pretty awesome. Prayer of Protection – Removes all harmful effects on the ally and makes them invincible for 1 turn. It seems like Prayer of Protection is the common second skill of the Paladins; the second skill that three out of the five have. Every monster family has this common second skill, with the exception of the Dragons, who all have a unique second skill. Other than that, I can’t say any more about Prayer of Protection. Divine Wind – Recovers the HP of all allies by 15% each and decreases the chances of being inflicted by a critical hit for 2 turns. Creates a shield that’s proportionate to 15% of your HP. So, looks like Louise’s third skill is a better version of the third skill of Acasis. Heal, shield, critical hit decrease (without needing to be awakened!) and 15% of her HP, as opposed to a set amount of damage being absorbed! Author’s Opinion – I definitely like Louise’s first skill increase the most out of all of her sisters. That alone makes her a pretty viable option in ToA. Her second skill, Prayer of Protection, is akin to Neal’s third skill, and her better version of Acasis’s Forcefield is really good, too! Overall, she could be a good +1 in GB10 and an essential unit in ToA. 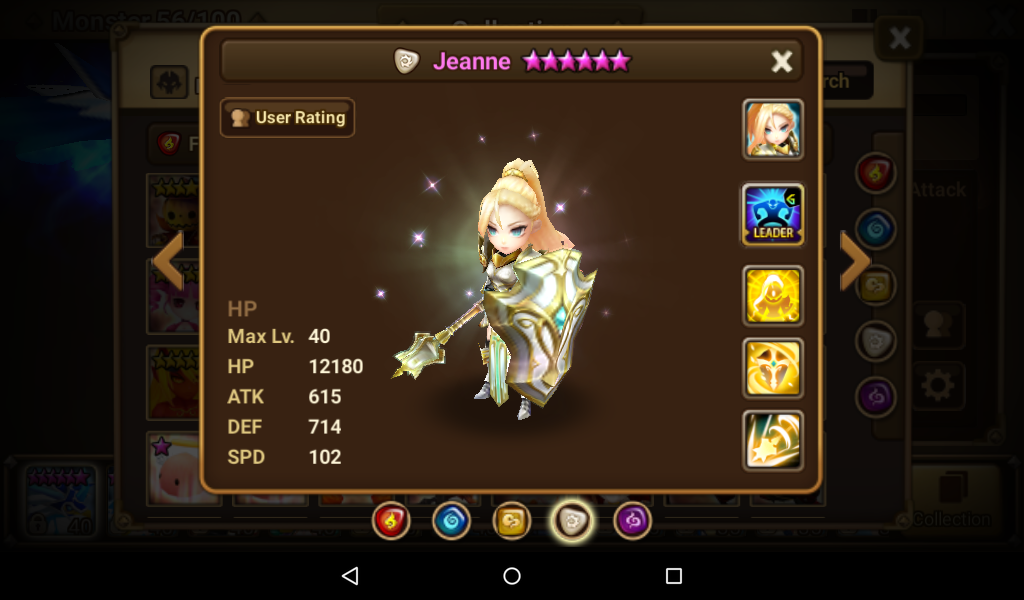 Justice Strike – Attacks the enemy and stuns them with a 15% chance. You know the drill about how I feel about unawakened Justice Strike. Justice Strike (Awakened) – Attacks the enemy and stuns them with a 15% chance. Recovers the HP of an ally with the lowest HP by 10%. This attack will deal more damage according to your max HP. Ahman 2.0 much, Com2uS? Even then, Ahman is better in a way. Yes, he needs 100% CRIT Rate, but he recovers all allies by 12% of his max HP, not to mention that it applies to all of his skills, as opposed to just Jeanne’s first skill. Prayer of Protection – Removes all harmful effects on the ally and makes them invincible for 1 turn. Not much to say here, we’ve already covered Prayer of Protection on everyone else. Cry of Provocation – Provokes all enemies for 2 turns. I don’t know how to feel about this one. Kai’en, a three star monster that’s used in her fusion recipe, does the AoE provoke, also 2-turns, but he increases his defense for 3 turns too, which makes him better at his provoking than Jeanne. When you realize that Kai’en is a three-star monster and Jeanne a five-star one (One you have to fuse, too!) you realize that this skill is pretty underwhelming. Author’s Opinion – Unfortunately, the most common Paladin is the most mediocre of them, in my opinion. Everyone was super hyped for her when her fusion recipe was released that when it was Sunday, no one wanted Belladeon – we all wanted the new Loren SD so we could have all the materials for Jeanne ahead of time. Upon looking at her skillset, I don’t think it was worth all the hype for her. While Loren herself is great with her sweet passive skill, Jeanne is not. While she is bad, she’s still usable and worth the fusion, but in an “I’m an optional monster” way like Katarina, and not “FUSE ME NOW” like Veromos. Like Josephine, I feel like she could be an okay +1 in someone’s first GB10 team, but I wouldn’t recommend it this time. 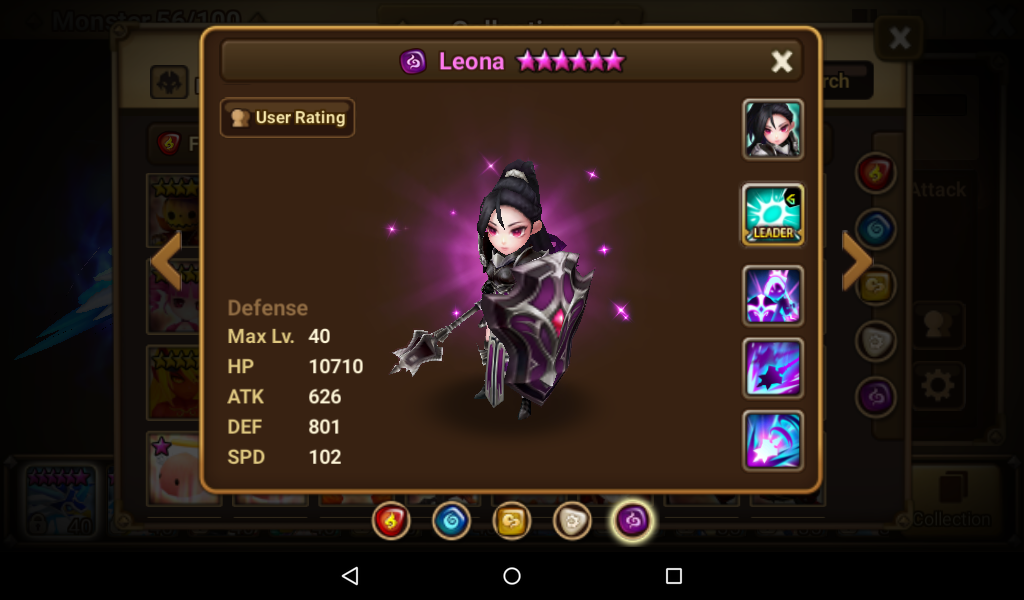 Justice Strike – Attacks the enemy and stuns them with a 15% chance. I don’t know what to say here. Pretend there’s some witty statement you’d expect me to say. Justice Strike (Awakened) – Attacks the enemy and stuns them with an 85% chance. While I consider Leona to be the best Paladin, I feel like her awakening bonus is really underwhelming. While everyone else has a new benefit added to their first skill, her stun rate is increased by 70%. However, an 85% chance to stun enemies (Without the use of Despair runes, too!) is still really cool, and everything else about her makes up for this. Fury of Punishment – Attacks the enemy 2 times to remove a beneficial effect with a 75% chance each and provokes the enemy for one turn. Leona’s got the same second skill as Josephine; not much to say here. Internal Force [Passive] – When the battle begins, balances the Defense and the Attack Power so that the stat with the lower value will have the same value as the stat with the higher value. I have no idea if this passive skill applies to all of her teammates or just herself, but I don’t care; her passive is awesome! Author’s Opinion – Now THIS one is the Paladin I want most! Not only is Leona the prettiest and the rarest of her sisters in my opinion, her passive skill is insane! I think she can be used pretty much anywhere except NB10: Element neutral, beneficial effect remover, and a rockin’ passive skill! In total, I think the Paladins are a really good monster family with the exception of Jeanne. Even then, she looks like she could be kind of useful in GB10, so while some members of the family are mediocre, they still have their uses. If I get one of the Paladins, I’ll probably do a more in-depth article about them, but this is just a first look on them. I’m Sara Ann, and I’ll see you in the next article.]]>