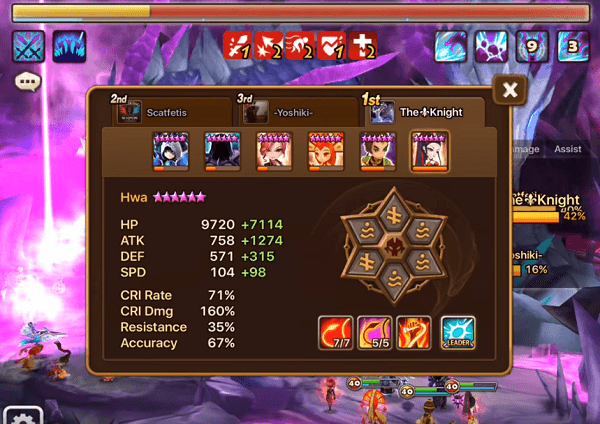 <![CDATA[Today, we got high level Guardian player Peter of Knightly gaming to give us a run down on Rift Raids R5! <center>

How much does RNG affect winning in R5?

There are only two RNG factors in rift raids: Your monster’s choice to use their first second or third skill every time their turn is up, and the Rift Boss’ choice to use “breath of doom” or “crush of doom” every time he/it gets a turn. Everything else is set, and the way you craft your team can significantly reduce your chances of wiping.

Every 16th turn on your team, the Boss will wipe away all the beneficial buffs on your team and attempt to stun everyone. Understanding how this affects your team is huge, because in reality, your important monsters only get about 2 turns to do their job each cycle. Do you believe me? Your 16 turns becomes 13 turns on average when you factor in an average of 3 stunned each cycle. With 6 monsters on your team, you are most certainly going to get one violent proc. Divide the remaining 12 turns by the 6 monsters on your team and you have an average of 2 turns per monsters per cycle. The bottom line here is that each monster on your team has a very small window to do their job, and understanding the Cycle allows you to tweak your team to beat it. Resistance is paramount – If you bring in low resistance monsters that get stunned every cycle, you are giving up 6 out of your 16 turns. That is a huge problem, so aim for 70% resistance and make sure everyone has at least 59%. Get rid of useless turn takers – The first way you can do this is by taking your tanks and less important monsters off violent runes so that your healers and DPS have more turns within the cycle. The second thing to watch out for is violent offenders, Seara and Orion have built in violent mechanics that waste turns. Having them on violent can take up half you entire cycle and cause your group to wipe. Anavel has a similar mechanic with her first ability, but it is less of an issue because that ability does damage as well as helping the refresh off her cleanse. Use revenge runes on key monsters – Darion, Bella, Dias, Hwa, Colleen, and any monster with a good debuff on their first ability will shine with revenge runes because they will not take up counters within the Cycle. Speed tune your team – Your cleanser should be your fastest monster. Healers should be 170+ speed. DPS should be 150+ speed, and Tanks should be as slow as possible. Replace SPD leader with Crit if you groups are wiping – There too many subtle nuances with using a speed leader to explain exactly why SPD causes raids to wipe. After months of testing, I feel safe claiming that SPD leaders cause a lot of wipes, and generally you are going to have faster runs with a crit leader anyway. (Of course using HP and DEF leaders is the ultra safe way to go, but many groups are past this now) Use monsters with good AI – Colleen is an MVP because every ability is useful. Lisa is an MVP because she never uses her useless 2nd skill in raids. On the other hand, monsters like Delphoi can be good, but aren’t favored due to the AI using useless abilities. Max your HP and DEF building towers for 20% extra stats – (The difference is huge) Sticking with these principles will take out the RNG factor in raids, allowing you to win every time. I do not remember the the last time I failed in R5 when I was running with my regular friends, but It has been at least a couple months. Please feel free to ask me more questions. My IGN is KnightlyG4ming and I hang out in channel 65 on the global server.]]>