<![CDATA[Welcome to 2014, you guys. Summoner’s War has just come out this year and Arnold was still meta. This Hall of Heroes, announced on Wednesday, January the 10<sup>th; would have been glorious if it came out during 2014, but alas, it is 2018 and no one really likes Arnold anymore. Nevertheless, I’m here to talk to you about this month’s Hall of Heroes and what to do to farm it efficiently. Before we begin, Hall of Heroes is a lot like Trial of Ascension, so that means you can use Hall of Heroes strategy and monsters (e.g. attack bar pushbacks, stuns and continuous damage are king). I strongly advise bringing your regular Trial of Ascension team. In my case, I’m using Baretta (L), Belladeon, Frigate, Veromos, and Charlotte.

Eh. I mean, he’s still good, but he’s not the meta anymore. I would still recommend keeping a copy of him, just because his third skill’s damage is 30% of his Max HP; quite deadly if you build him tanky. 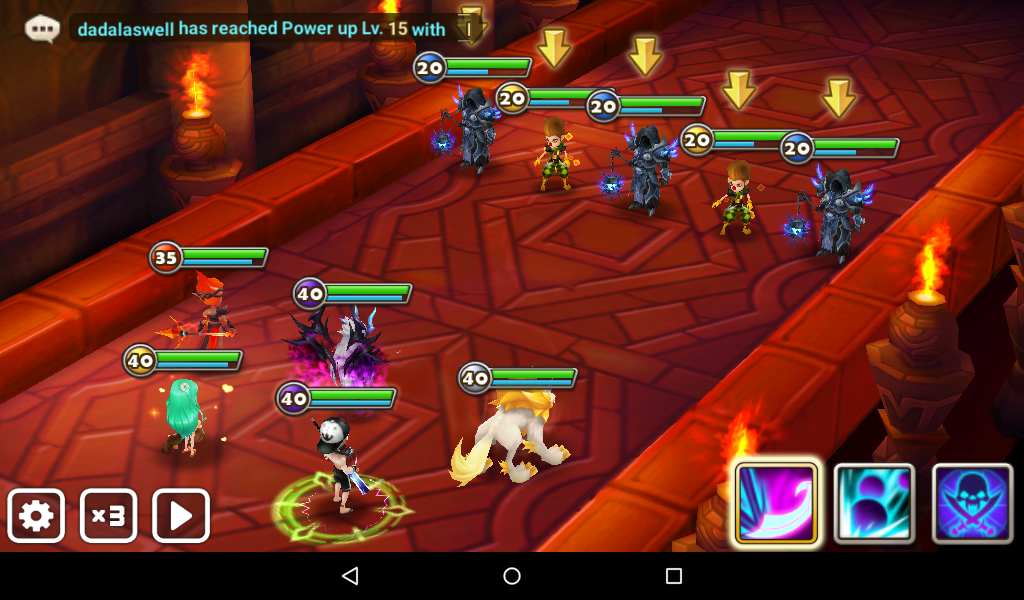 It’s here that this month’s Hall of Heroes begins. Here, you can see two Lushens (wind Jokers) and three Fedoras (water Death Knights) The Threat: Both Fedora and Lushen are massive threats, especially in the later stages; Fedora because he can grant Immunity and Endure on all allies, and Lushen because, well, Amputation Magic. As we all remember from Arena, a well-runed Lushen on Amputation Magic is a nightmare in himself. The Solution: Take out the Lushens first before the Fedoras get a turn. I highly recommend bringing Baretta, mostly because of this stage. A Baretta on Despair can stun everyone in this room, making it impossible for the Fedoras to buff their friends; not to mention that he brings two Continuous Damage effects, a full attack bar reset and a speed lead to the table. Belladeon and any of the archangels can particularly shine in this stage, mostly because of their ability to still buffs, so if you don’t manage to stun/outspeed the Fedoras and they Decline, at least you can steal the buffs off of them to make life easier. However, you can also completely avoid needing an AoE buff stealer because I recommend bringing an attack bar booster, such as Bernard, in order to outspeed them. In the later floors, the monsters are going to get fast, and the more speed you can get your hands on, the better. There aren’t any revivers in this stage, though I can’t say the same for… 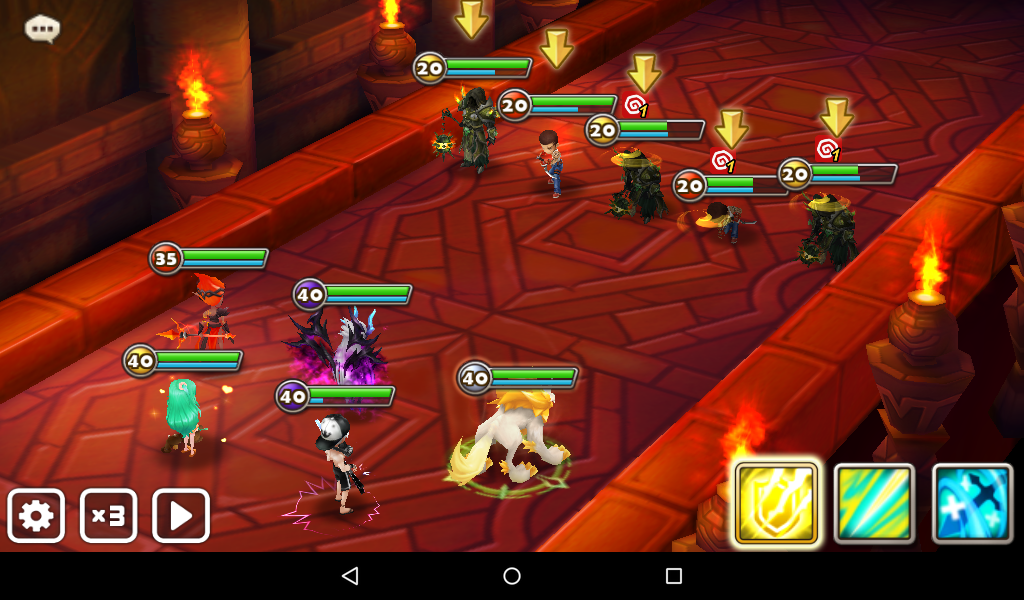 Welcome to Stage 2. You’ve gotten past the surprisingly intimidating stage 1, and now you’ve been greeted with three Briands (wind Death Knights) and two Trevors (fire Neostone Fighters) The Threat: I think the biggest threat in this stage is the Briands. They have a Deadly Wave, meaning an AoE attack decrease, and they also have a reviving skill, meaning that you’ll have to either kill everyone quickly or stun the Briands so that they can’t do anything. Of course, Trevor’s gonna be a pretty big problem too. As his HP decreases, the amount of damage he takes decreases as well while his attack power increases. I suppose the one thing to be glad about, though, is that the Trevors aren’t runed on Vampire runes like you see in the arena. The Solution: Kill. Briand. First. I cannot stress this enough; you always want to get rid of the revivers first, so this way they can’t revive each other/any of the other members in their team. While at it, make sure to keep Trevor stunned; I recommend using Baretta as crowd control. If you have an attack bar decreaser, that’s great too; you can use them for pretty much every stage here. Trevor’s going to be quite a bit of a problem once you get his HP low enough, so watch out and make sure to bring Belladeon; the best free healer you can get. 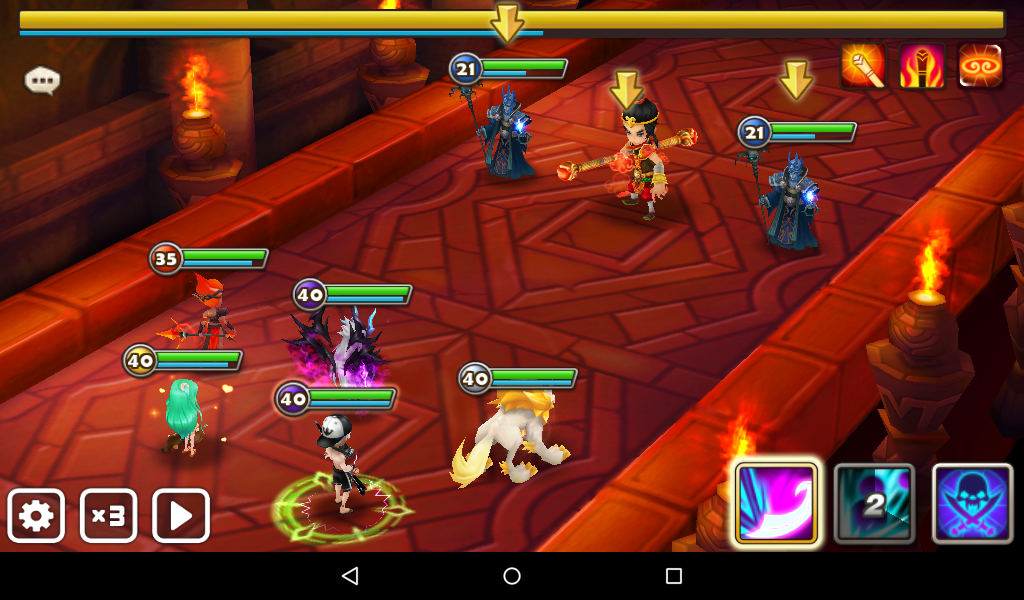 You’ve officially gotten to the miniboss stage, with Mei Hou Wang (Fire Monkey King) and two Rigels (Water Liches). Fun fact: Did you know that the miniboss in Hall of Heroes is always the same element as the boss itself and its lackeys are its elemental disadvantage? The Threat: Working together, the Rigels and Mei Hou Wang are a huge threat in themselves. Both Mei Hou Wang and Rigels have a passive that basically keeps them from being affected by sleep, freeze and stun; not to mention that MHW’s passive increases his attack power by 20% whenever he gets hit, stacking up to ten times. The Solution: Attack bar resets and continuous damage is really the only solution to this particular stage. You can’t stun them, but you can push their attack bar back and use Continuous Damage – again, why you should seriously fuse Baretta, because he’s a major help in Trial of Ascension and Hall of Heroes. Try not to let Mei Hou Wang use Fire Monkey Wand on a wind monster; if you’re unlucky, it’ll instantly take them out in one hit. You should also be on the lookout for when Rigel uses his second skill, Deadly Touch. When that happens, you could be hit with a defense break, and if an enemy that’s hit with Deadly Touch has the slow effect (which is on his first skill,) it’ll go from slow to freeze. 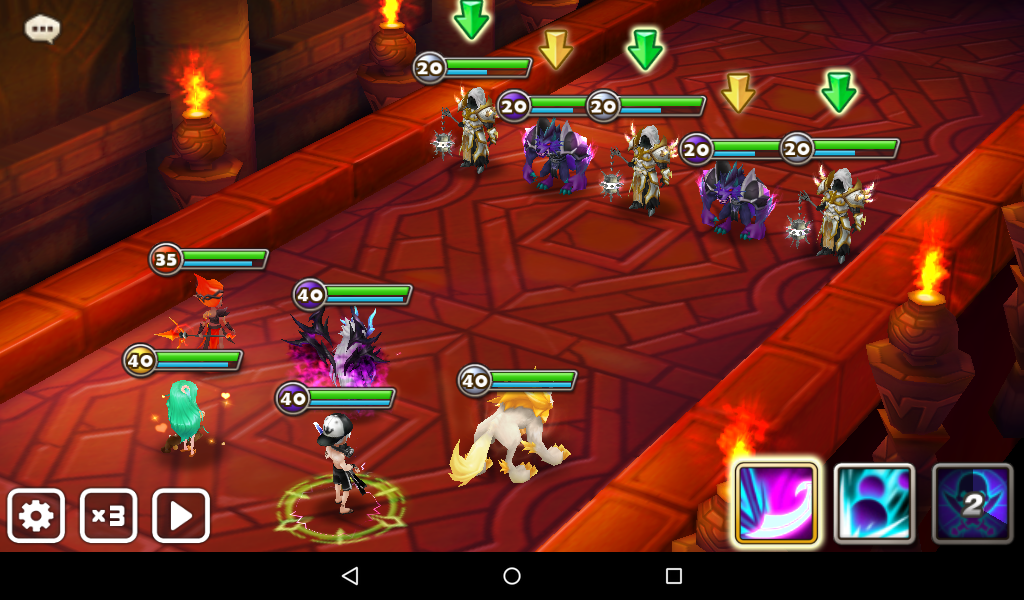 Oh boy. I seriously hope you didn’t bring someone like Verdehile, because you’re going to have an absolute blast here if you did. Here, we’re greeted with three Conrads (light Death Knights) and two Jultans (dark Werewolves) The Threat: Conrad’s actually a reviver under specific circumstances. If he kills an enemy with his third skill, Trade, he’ll revive a random ally. However, if all allies are alive if an enemy’s killed with this skill, he’ll create a shield based on his level on all allies for 2 turns. Jultan is the main reason why you shouldn’t bring Verdehile to this Hall of Heroes. Whenever he’s hit by a Critical Hit, he’ll inflict damage on the enemy based off of his Max HP. Verdehile needs 100% Critical Rate in order for his passive to activate, so if you use any of his skills on Jultan, you’re gonna pretty much kill your poor fire Vampire boi. The Solution: Target the Conrads first so that they can’t revive anyone, and then work on Jultan. I’d be careful not to use monsters that have high Critical Rate, but then again, when all three Conrads are down and all that’s left are Jultans, what can you do? This one’s actually one of the easier stages as long as you don’t have anyone who depends on their Critical Rate. 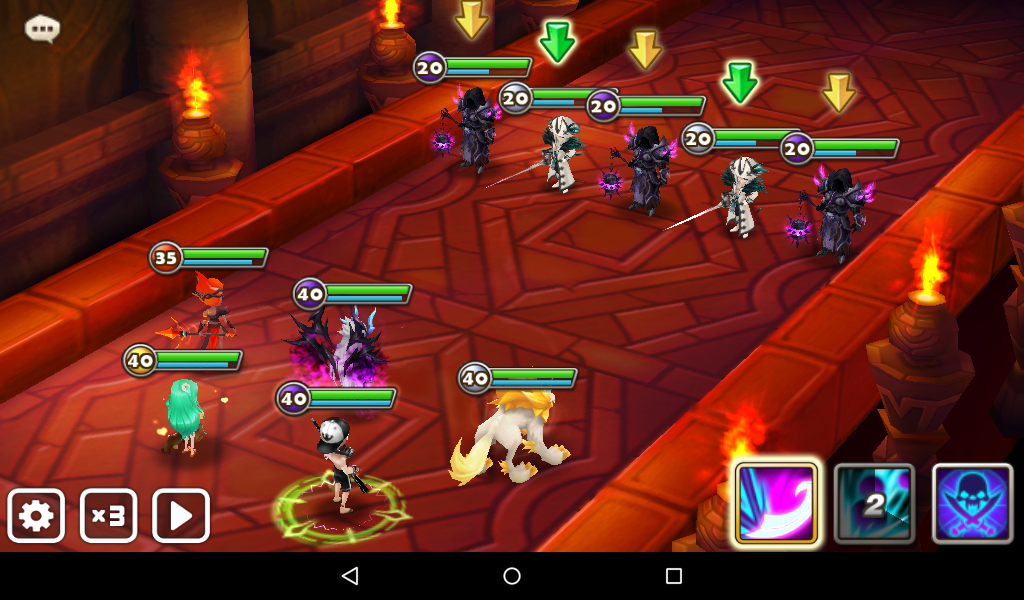 -insert “You Are a Pirate” here- This stage consists of three Dias’ (dark Death Knights) and two Brigs (light Pirate Captains), along with another bad joke incoming; just you all wait. The Threat: The biggest threat here is Brig himself. He, Carrack and Barque are known as the “lesser Pirate Captains,” being forgotten because their water and dark brothers are really good (I should know, I have a Frigate myself.) However, because he’s known as one of the lesser pirates, he frequently gets underestimated, but seriously; his third skill, Disarm, actually does pack quite a punch. As you may expect, Disarm first removes all beneficial effects off of the enemy that Brig attacks. Then, Disarm will break the enemy’s attack power and defense while simultaneously blocking beneficial effects on the enemy. Keep in mind that this is all in one attack. Dias doesn’t really focus on damage, instead blocking the damage that allies receive, due to his passive “Control,” which decreases the damage that allies take and also his chance of being hit by a Critical Hit. This means that you’re also going to have another blast if you made the mistake of bringing Verdehile again, which is why I don’t recommend it. The Solution: Take out Dias first. It’ll make it easier to finish off Brig, but make sure to at least keep him stunned while you focus on Dias. If you completely ignore either of them while chipping away at the Dias’ HP, he’ll Disarm and potentially one-shot a member of your party. When you’re done with Dias, you can safely focus on Brig, so that you keep on having a Buenos Dias! (someone please shoot me for that bad pun) 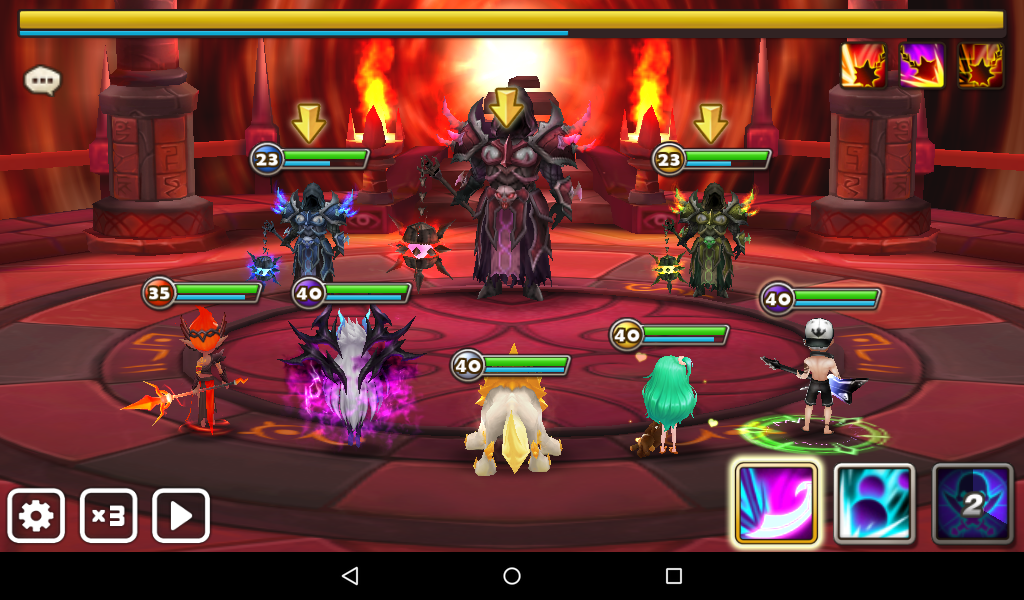 Like said in my last article, this stage of HoH has the most variety of all the floors, because the elements Arnold’s lackeys will differ each stage. The Threat: The threat differs in each floor. For example, as you can see in this picture, Arnold’s lackeys are Briand and Fedora. In this case, I’d suggest Briand to be the biggest threat and that you should kill him first, then Fedora, then finally take out Arnold. However, Arnold is still really strong, especially in the later floors. When he uses Extort on an enemy, he heals himself based on how much damage he did, which, as mentioned in the beginning of this article, is 30% of his Max HP! This could instantly wipe out one of your teammates if he manages to use it! The Solution: Kill whichever Death Knight is going to be the biggest problem. In this case, I’d take out Briand and then Fedora before working on Arnold. Because Arnold can’t be stunned, but his lackeys can, use Despair units. The battle doesn’t end until everyone has been killed, meaning you’ll have to get rid of Arnold and his two minions before you’ve won the battle. However, what they’re not immune to is Continuous Damage, so load ‘em up! This Hall of Heroes is one of the more difficult ones, due to the ridiculous first stage and miniboss, but with enough time, effort and rage, you too can get your Arnold/free six-star material! I’m Sara Ann, and I’ll see you in the next article!]]>