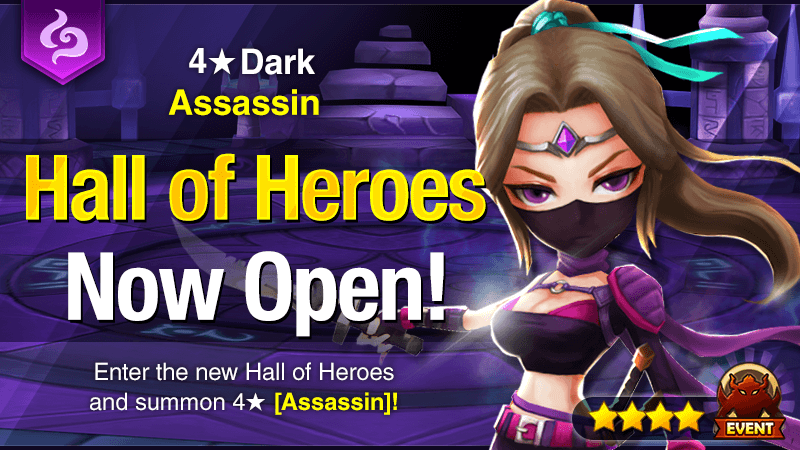 <![CDATA[On Wednesday, January the 9<sup>th, 2019, the first Hall of Heroes of the year was announced: the dark Assassin (Isabelle)! So many people were going nuts on the subreddit for Summoner’s War, because let’s be honest – no one expected such a good unit to be this month’s HoH! Before we begin, Hall of Heroes is a lot like Trial of Ascension, so that means you can use Trial of Ascension strategy and monsters (e.g. attack bar pushbacks, stuns and continuous damage are king). I strongly advise bringing your regular Trial of Ascension team. In my case, I’m using Baretta (L), Frigate, Shaina, Maruna, and Charlotte. Let’s cut the chatter and get on with it!

YES! She’s really good, actually! Like Kamiya, Isabelle is a great single (or even double) target nuker, and it’s all because of her self-buff and her third skill. Here’s her skillset: Expose Weakness: Attacks an enemy and looks for its weakness. This attack decreases the enemy’s Defense for 2 turns with a 50% chance. Capture Opportunity: Increases your Attack Power and Critical Rate for 2 turns and instantly grants you another turn. (Reusable in 5 turns) Endless Death: Deals damage to an enemy and recovers a turn if the enemy dies. If an enemy or ally dies when this skill is on cool down, [Endless Death] will instantly be reusable again. (Reusable in 6 turns) I can definitely see a lot of people using her now that she’s obtainable. She looks like she could be good in the Light Rift, too. I’m totally gonna make her and Galleon my next two six-stars. Rune Recommendations: Rage/Fatal + Blade, SPD/CRIT DMG%/ATK% 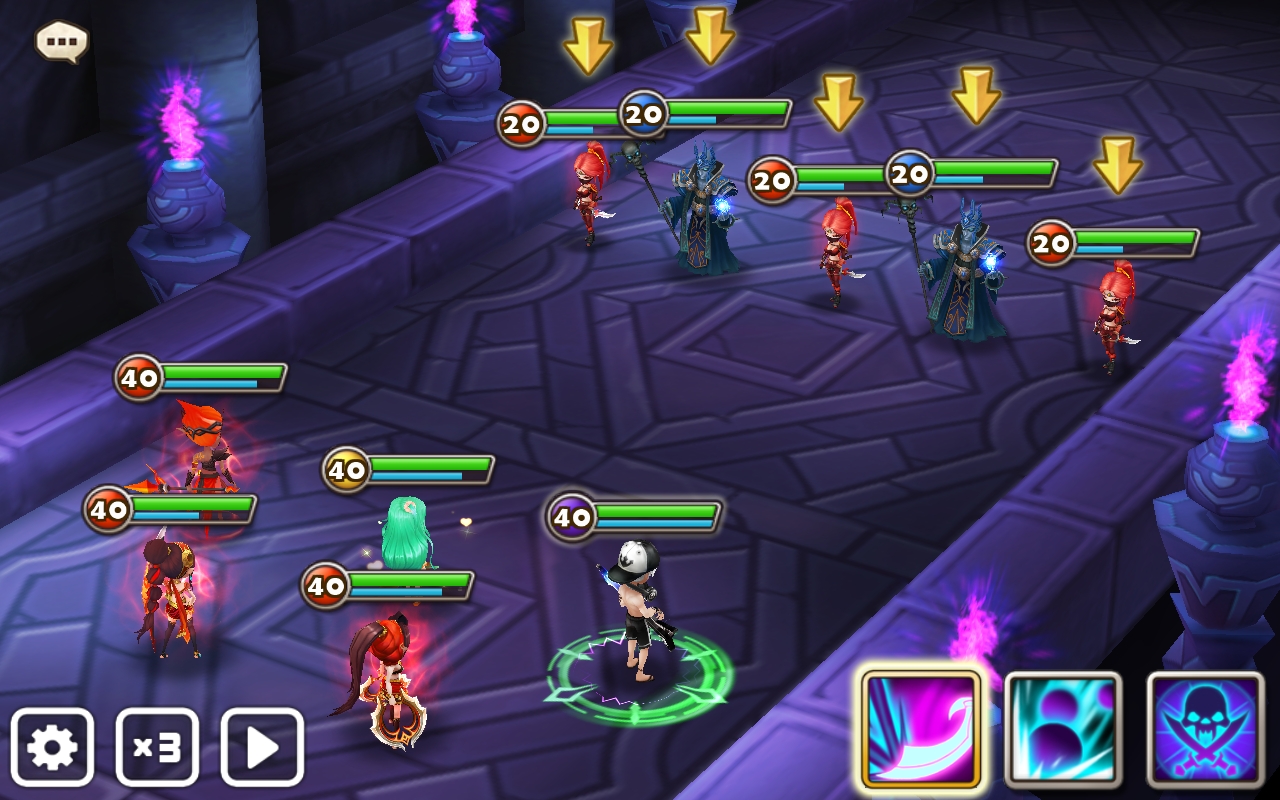 Today, we’re going to start this guide off with stage one, featuring three Lexys (fire Assassins) and Rigels (water Liches) The Threat: I dunno; it’s hard to pinpoint one monster who would be a massive threat. If I had to guess, though, I’d say that Rigel is a bigger threat, solely because you just can’t stun him. His passive End of Evolution means that he can’t get stunned, slept, or frozen. He also tends to hit really hard, which is terrible. Lexy is mostly known for her passive skill, Deadly Seduction. She decreases the damage that all of her allies receive by 15%, but she also decreases the recovery amount of all monsters on the battlefield by 50%, including both allies and enemies. That’s why she’s never used whatsoever, because of that “sweet” healing reduction. Yes, everyone on the battlefield means both her allies and her enemies. The Solution: Start by killing all three Lexys first. I wish you could stunlock all the Rigels, but you can’t. However, you can manipulate their attack bars, so as long as you can keep their attack bars from filling up all the way, then you should be good. Once all three Lexys are dead, you can fully take advantage of the fact that their damage reduction is gone and you can go ham on the Rigels, and it’ll be great. 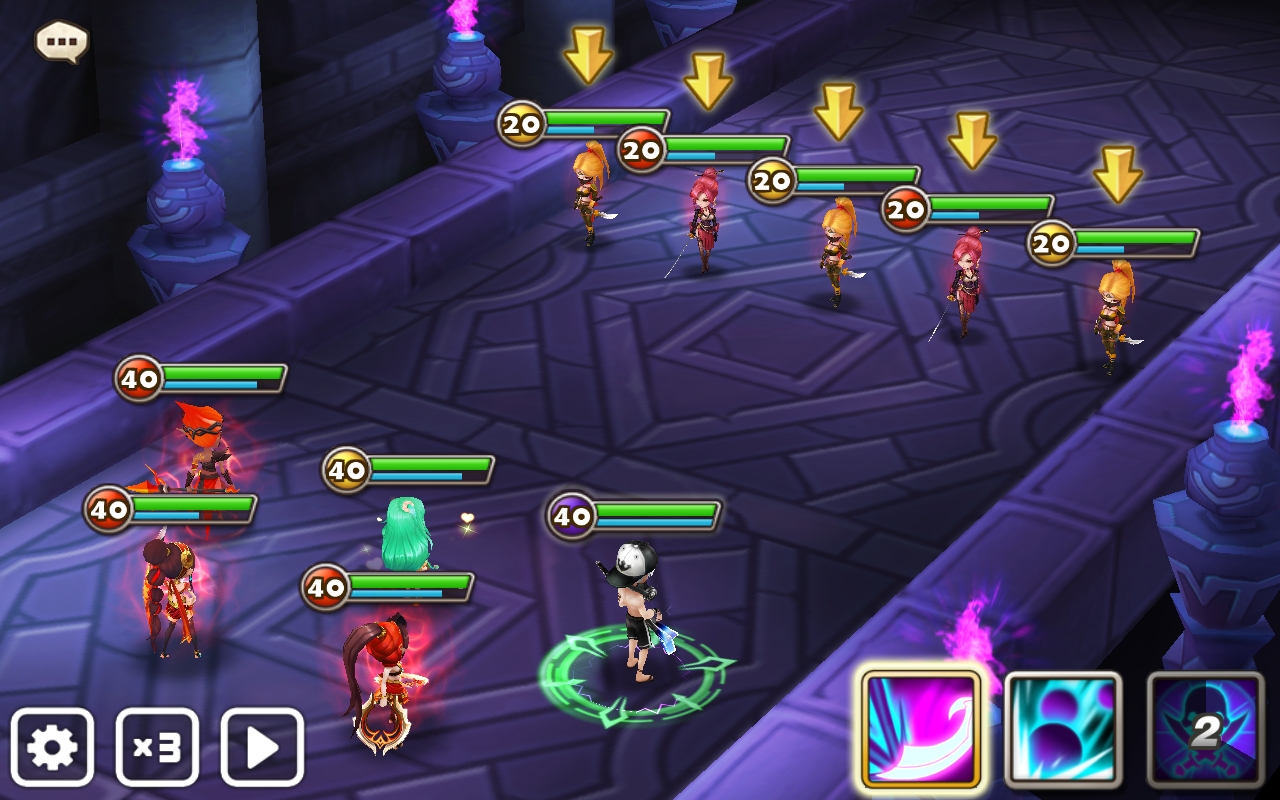 We are officially at stage two, folks! This stage consists of three Tanyas (wind Assassins) and two Lisas (fire Neostone Agents) The Threat: Tanya is basically a budget Isabelle. She has Capture Opportunity as well, and her third skill Shadow Assault kind of works like Isabelle’s. She’ll attack an enemy and disturb their healing for 2 turns, and she’ll attack another enemy instantly if this attack kills the first target. Her attack power is annoyingly high, too. That doesn’t mean Lisa is something to scoff at, though. Her third skill Attack Command cleanses all the harmful effects off of her allies, and then she’ll gang up on an enemy with three randomly chosen allies. As you can expect, she tended to attack my Charlotte a lot with at least two Tanyas. The Solution: Kill Tanya first. All three of them. Sure, Lisa can cleanse them all, but she can’t deal too much damage to you when all of the damage dealers are dead. In the meantime, keep Lisa stunned while you chip away at the Tanyas’ health. They’re kind of squishy, so it should be relatively quick for you to kill them. When everyone’s dead, you can advance on to stage 3, the miniboss. 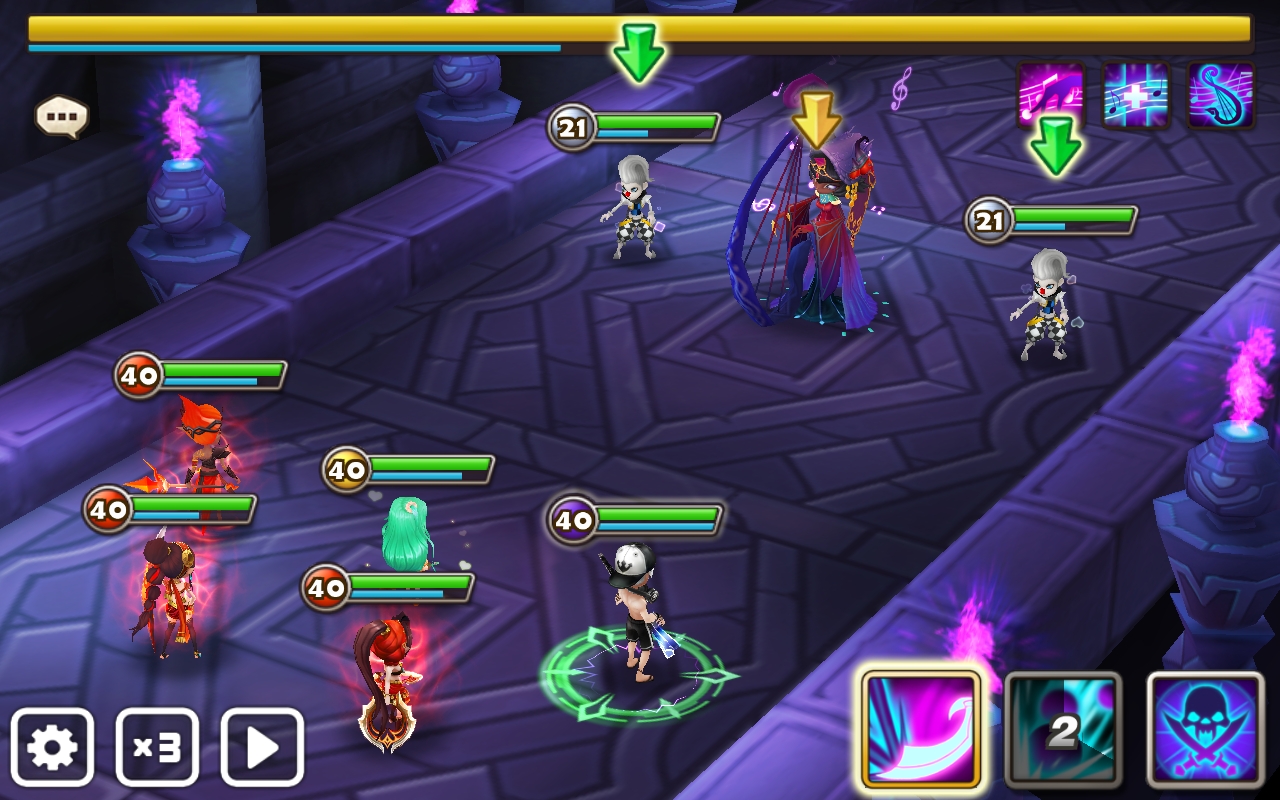 It’s time for the miniboss! Here we have Visac – I mean Vivachel (dark Harp Magician) and two Figaros (light Jokers) The Threat: Definitely Vivachel. Have you ever heard of irresistible/Immunity ignore skills? Vivachel has one of those skills; “Song of Switched Destiny.” She’ll switch the current attack bar and HP of either the enemy or another ally. That means if an ally has 90% attack bar but 10% HP, after Vivachel performs her third skill they’ll have 90% HP and 10% attack bar. Additionally, this is also a great way to both drastically lower the HP of one of the enemies and completely screw up the turn order that her enemies may have. Figaro isn’t much of a threat so I’ll just briefly go over him. His passive Camouflage gives him a 25% chance to cancel any incoming damage, and he’ll remove a beneficial effect off of the enemies that he attacks. The Solution: Keep Figaro stunned while you chip away at Vivachel’s HP. Whatever you do, don’t let Vivachel get a turn; it could be what makes or breaks your run! Remember that Vivachel also has Healing Music as her second skill, which brings AoE immunity to her team, which is another reason why you would want to keep her under control. You don’t have to kill the lackeys of hers, but if it makes it easier for you, then I’d recommend you go for it. Once Vivachel is dead, you can continue on to stage 4! 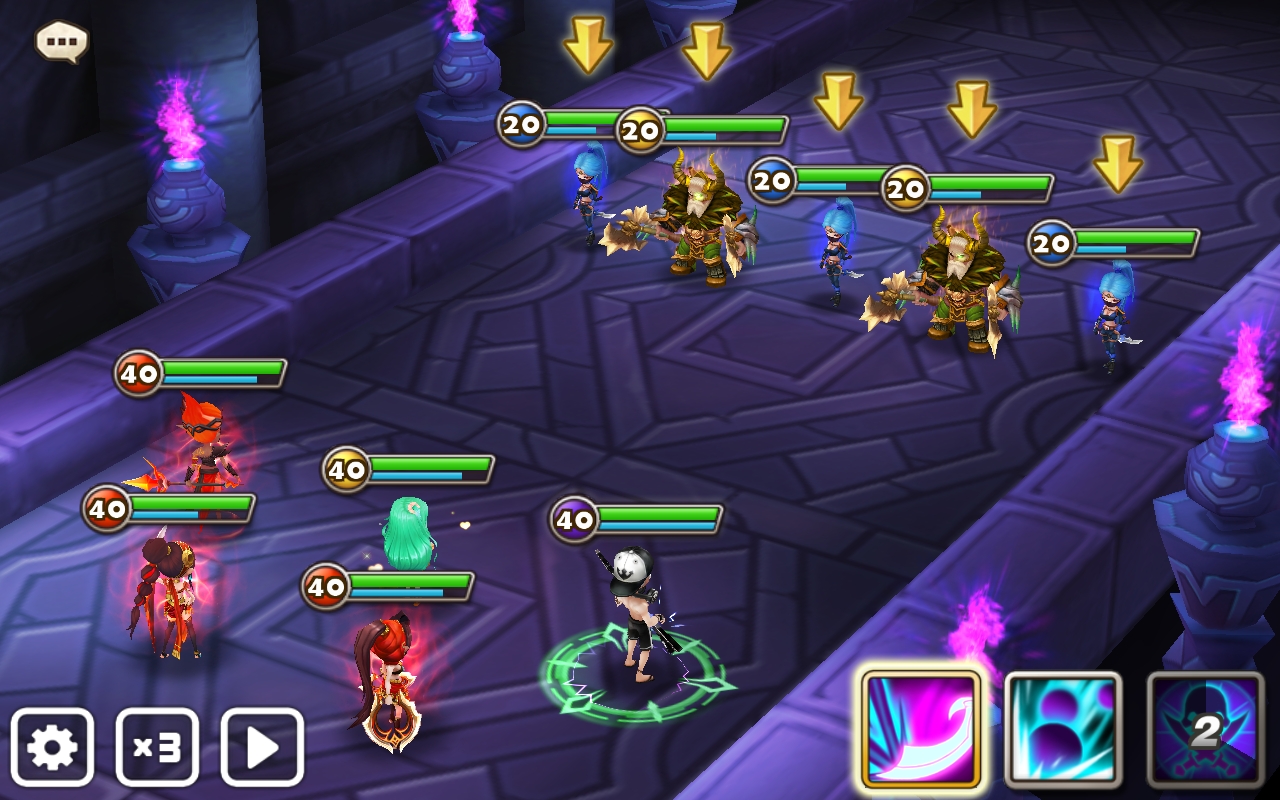 This stage consists of three Stellas (water Assassins) and two Hras – Hraes – screw it, he’s the wind Barbaric King. Gonna call him the BBQ throughout this article because I can. The Threat: Stella’s kind of fallen out of PvE use now that the twins are in the game, and she’s really stat and skillup hungry, but doesn’t mean she’s not bad, per say. Her third skill Blade Dance of the Reaper is both probably the longest skill name in the game, and hits pretty hard. She’ll attack an enemy a multitude of times based on her speed, with the maximum hit amount being 7. The wind BBQ also hits really hard. His third skill Resentment will attack all enemies twice, and he’ll increase his attack power and speed for two turns. When this skill is on cooldown, he’ll increase his attack speed by 35 and recover 10% of his HP every turn he takes. Resentment also hits really hard, so it’s no surprise why so many people like him in GB10. The Solution: Take out Stella first. If you can’t kill her fast enough (and know you can’t), then bring AoE slow monsters, like Spectra or Charlotte, and use it on her. This will decrease the amount of hits she’ll be able to get in, and slowdown is just naturally useful. Once Stella is dead, you can safely work on killing the BBQ, and then we can move on to stage 5! 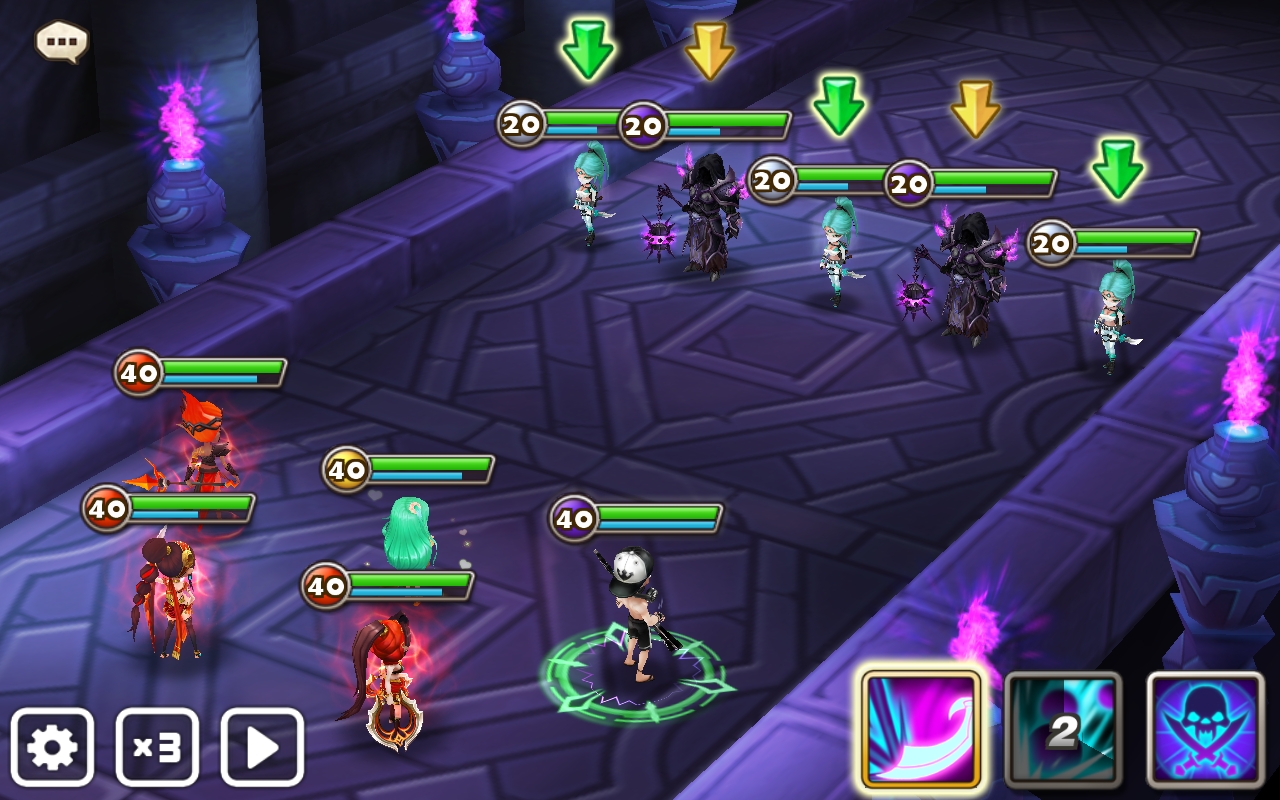 We’re almost there! This stage consists of three Natalies (light Assassins) and two Diases (dark Death Knights) The Threat: Natalie has a massive multiplier on her third skill, which attacks one enemy and silences them for 2 turns. If that enemy is killed, then all the other enemies will be Silenced for 2 turns as well. If that’s not enough, Dias’s passive is like a better version of Lexy’s. He’ll reduce the incoming damage that his allies take my 15%, and the chances of himself getting hit by a critical hit by 50%. This makes it even harder to kill him than he already is. From what I remember, he’s pretty tanky, which is one of many reasons people use him as a damage reducer in raids. The Solution: Kill Dias first. It’s not going to be easy; you’re going to miss a lot of Critical Hits, but thankfully his damage reduce doesn’t stack on himself. While you attack Dias, keep all the Natalies stunned. Once all five monsters are dead, you can advance on to the boss stage! 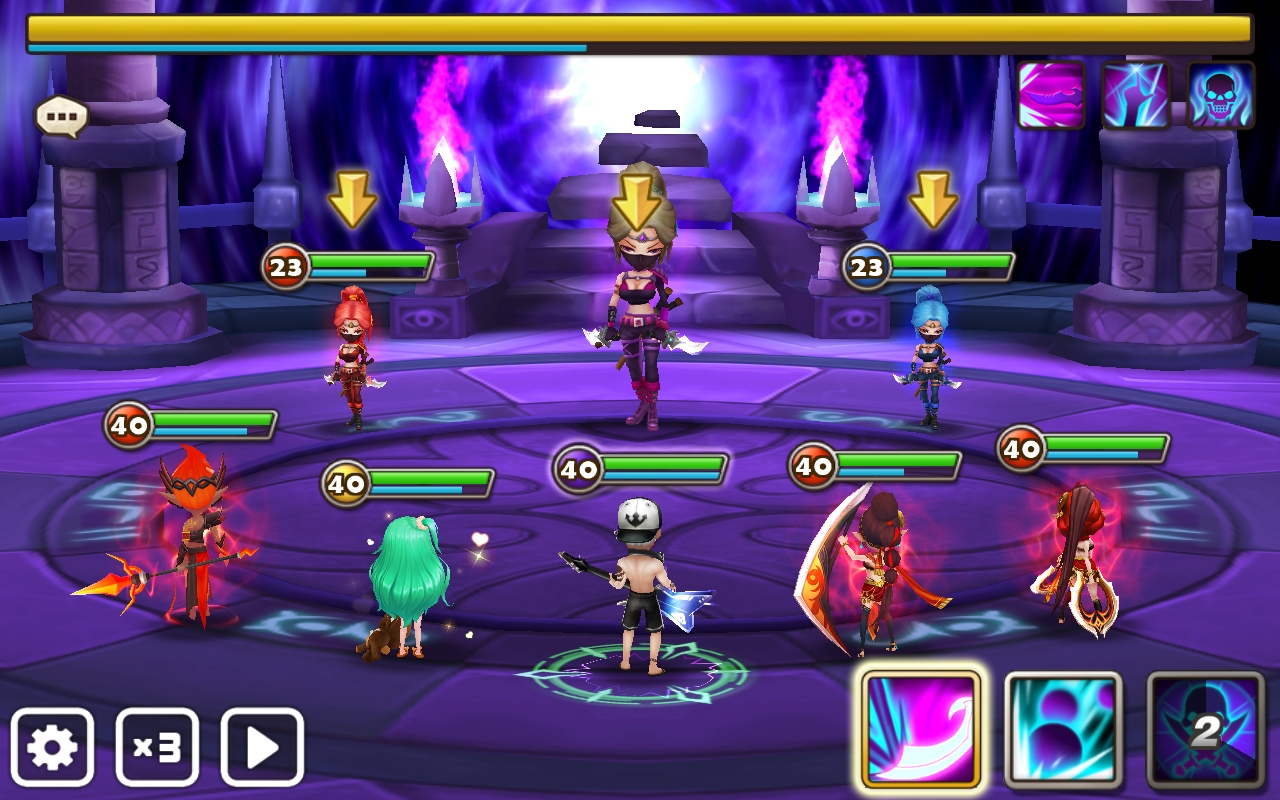 Yay, it’s time for the boss! The Threat: The threat differs because the lackeys differ as well. For example, in the picture above Isabelle is the threat because of her massive single-target nuke. The Solution: Again, the solution differs because the lackeys differ. In this case, I would take out Lexy first, stun Stella, and then kill Isabelle to win this round. Overall, Isabelle is going up in the Hall of Fame for HoH; right next to Gemini, Mihyang, and many other monsters. I’m Sara Ann, and I’ll see you in the next article!]]>