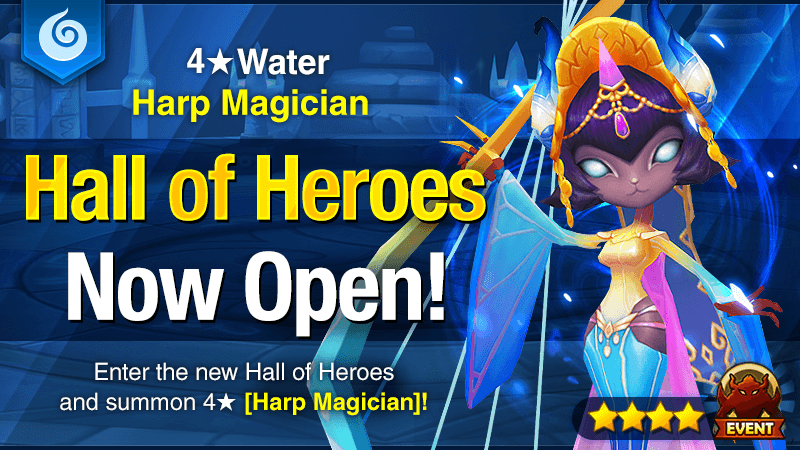 <![CDATA[On Wednesday, January the 8<sup>th, the Sonnet (water Harp Magician) Hall of Heroes was announced. Now, unless you have a Triana or the LnD Harps, I can’t really see any good use for Sonnet, to be honest. Before we begin, Hall of Heroes is a lot like Trial of Ascension, so that means you can use Trial of Ascension strategy and monsters (e.g. attack bar pushbacks, stuns and continuous damage are king). I strongly advise bringing your regular Trial of Ascension team. In my case, I’m using Baretta (L), my water Homunculus Kaneki (Ice Mist path), Verad, Frigate, and Charlotte, because Shaina got nerfed hard and I am now unable to use her in ToAH. Let’s cut the chatter and get on with it!

When I say “I can’t see any good use for Sonnet,” I don’t mean that she’s bad. Actually, she’s been recommended to me for that one time I couldn’t get past the Leo Ragdoll stage in ToAH93, and I mean, I can see why people use her when they don’t have anything better for ToA. You see, Sonnet’s “thing” is that she gives AoE sleep to her enemies, while helping her allies in the process. Her second and third skills both put AoE sleep on all her allies. However, her second skill grants Continuous Damage for 2 turns, and her third skill grants a shield on her allies equivalent to 30% of the damage dealt. The damage of her third also increases according to her max HP, too. So, if you don’t have anyone usable/use a Succubus in your ToA team, then yes, I’d say she’s usable. Otherwise, at the most, she’s just Triana or Vivachel skillups. 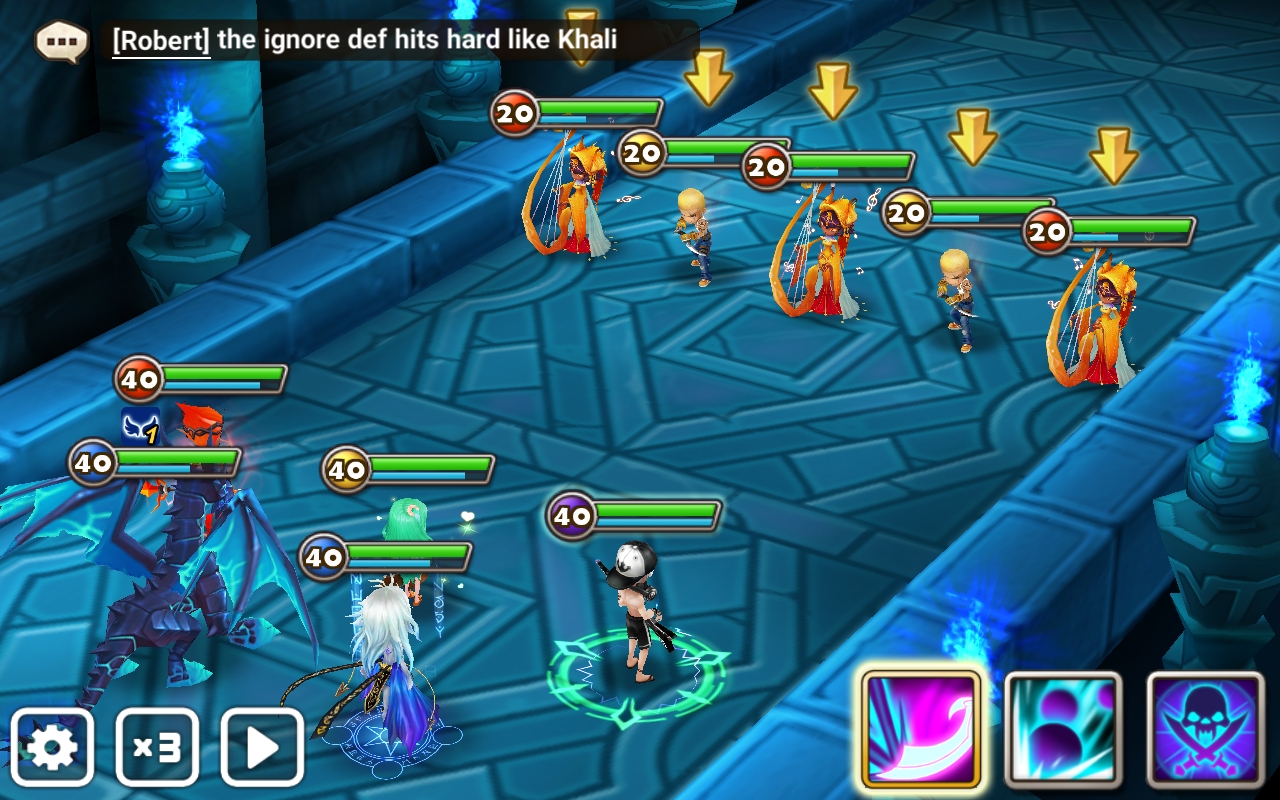 Welcome to stage 1, you’re doing great I bet. Anyway, we’re going to start off this HoH with three Harmonias (fire Harp Magicians) and two Logans (wind Neostone Fighters). The Threat: You know that meme where the therapist says “Vio runes in HoH don’t exist, it can’t hurt you” and Yellow Trevor (Logan) proves otherwise? Yeah, I felt that in my soul with this round. Anyway, Logan’s got damage to spare here. His third skill Push Through’ll attack an enemy two times, decrease their attack speed for 3 turns, decrease their attack bar by 30% for each hit, and if he depletes their attack bar, he’ll instantly recover a turn. Mega oof. Harmonia, meanwhile, is known to deal damage to her enemy and then heal her ally by a massive amount. Her third skill, Unwanted Harmony, evens out the HP of an ally and an enemy target, and then decreases the enemy’s HP by 15%, healing said ally by 15% too. The Solution: Go for Logan first to take out the main sources of damage, and then you can work on the Harmonias, because they can’t really do that much damage. Watch out for Harmonia’s immunity on her second skill, though. 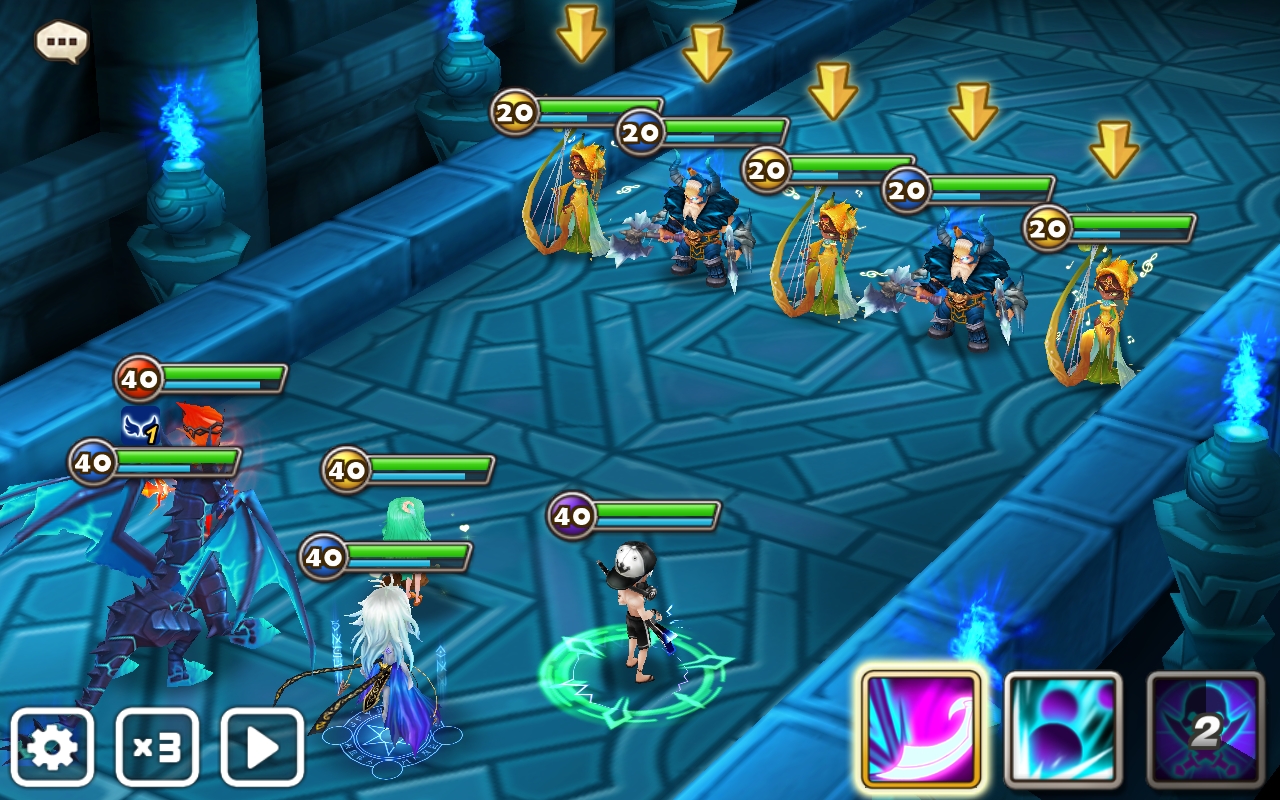 I bet all you RTA players just got PTSD flashbacks on this stage. But anyway, Stage 2 is three Trianas (wind Harp Magician) and two Aegirs (water Barbaric Kings). The Threat: Uuuuuugh. I remember when Aegir first came out as a HoH, no one wanted to use him, but now look. Anyway, Aegir’s third skill Confiscate attacks an enemy twice, and each attack has a chance to steal a beneficial effect from the enemy. However, if they have no beneficial effects, he absorbs 50% of their attack bar per hit. Remember that the Barbaric Kings also have a mechanic where, if their third is on cooldown, they’ll get an increase in speed and he’ll heal himself by 10% HP every turn. Triana meanwhile, has the passive Salvation Song, which is kind of like Garo’s passive. She will offset any incoming damage that may cause her allies to die, and she’ll then instantly gain another turn. It really sucks to deal with. The Solution: Attack the Trianas first, or use multihit attacks. I’ve found out that AoE multihits will offset all of their passives at once if they’re at low enough HP, and then you’re safe to deal with all the Aegirs, though they’re already annoying on their own. 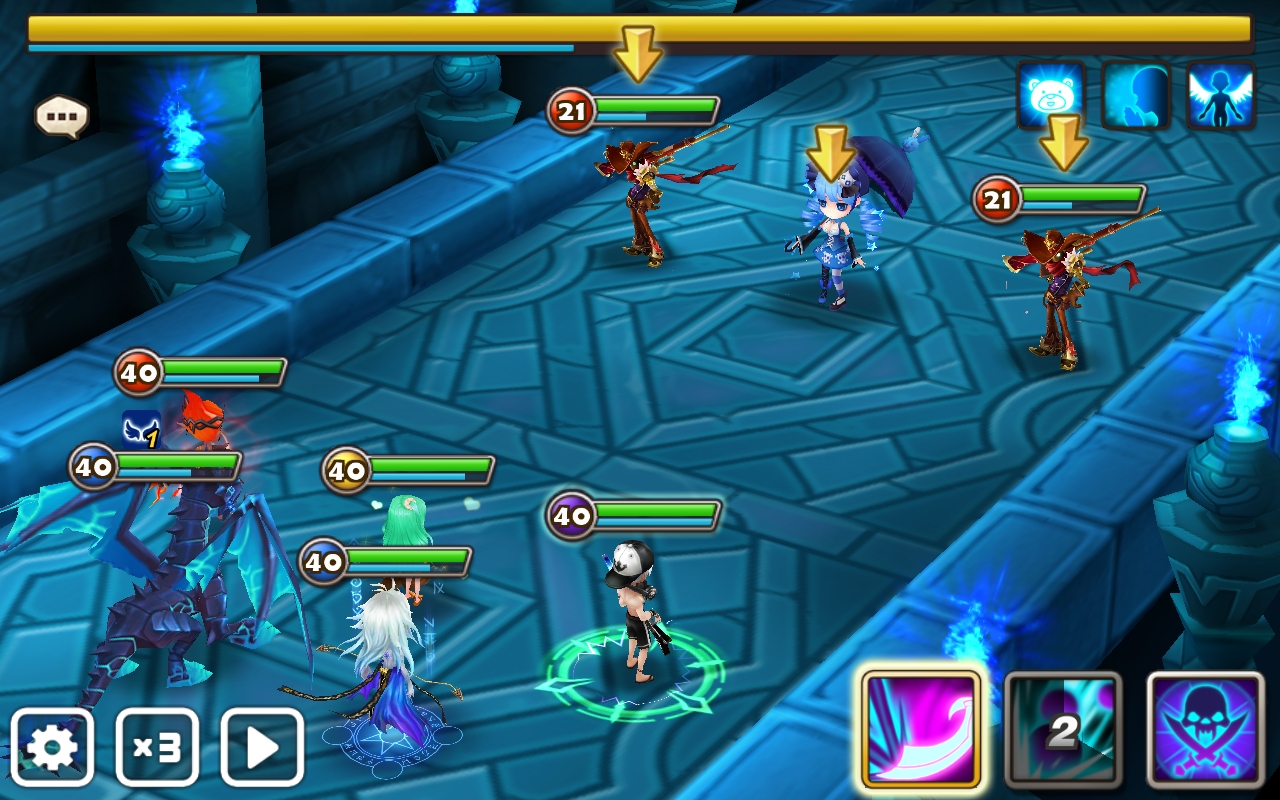 Miniboss time! Here, we have an Anavel (water Occult Girl) and two Carcanos (fire Sniper Mk.Is). The Threat: Anavel is a really good healer for Raids, and for good reason. Her second skill Girl’s Prayer heals everyone in her allies and removes their harmful effects. Reminder it’s just a second skill, too. Her third skill Water Guardian Angel attacks all enemies thrice, breaking their defense and also decreasing their attack speed. Carcano, well, there’s not much to talk about him. The only thing I can really talk about is his passive Dead Eye, which lands a defense break on a random enemy at the start of each of his turns. The Solution: Luckily, you don’t have to kill the lackeys to get past the miniboss, so if you just stun both Carcanos and focus on Anavel, you should be able to safely get past this stage with minimal difficulty! 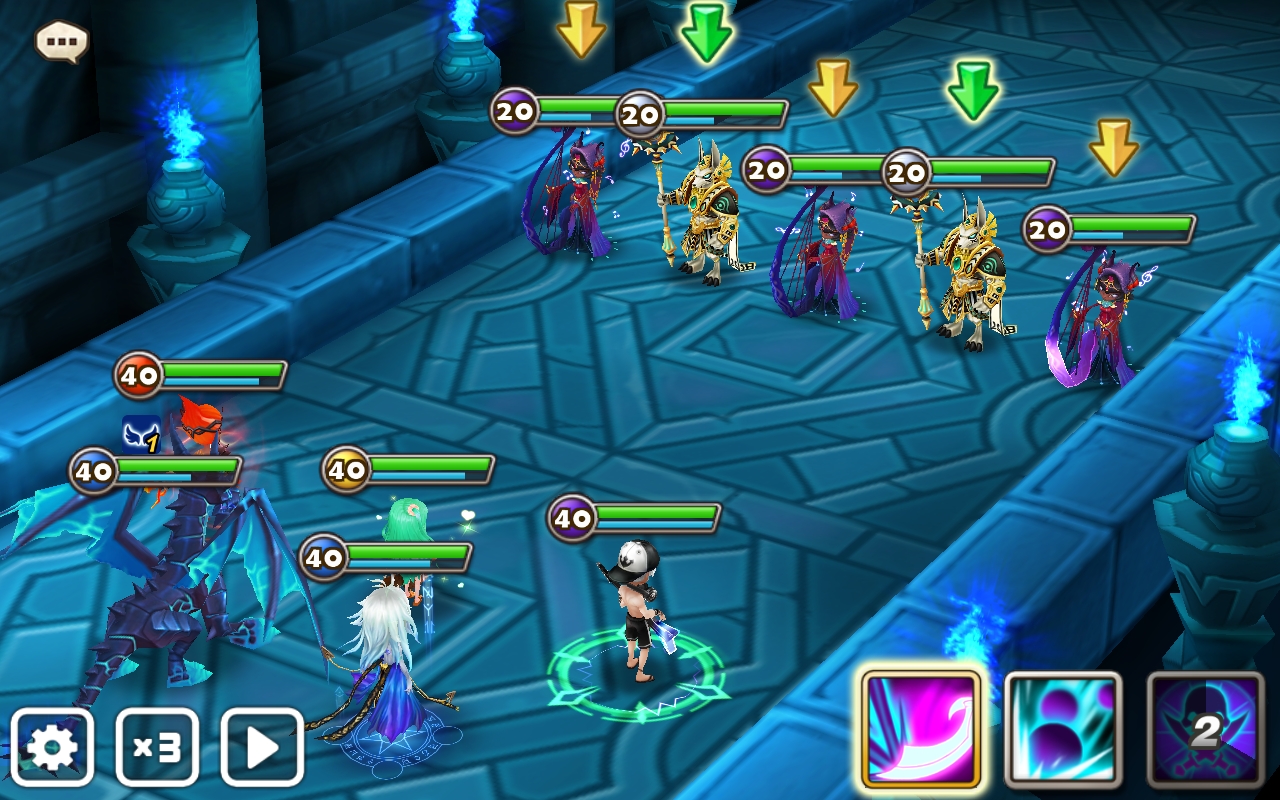 Only two more stages left! Here, we have three Visa- I mean Vivachels (dark Harp Magicians) and two Amarnas (light Anubises). The Threat: Did you know that I actually have an Amarna of my own? He came to me about a week after the Figaro HoH – no I will never get over the fact my very first LnD lightning after 3 years became HoH 2 weeks later – and I’ve loved him since. Anyway, the reason why I like him so much is because of his third skill, Secret of Eternal Life, which will heal all his allies and remove all their harmful effects. However, if there are any dead allies in his team, he will revive any and all dead allies at the cost of 2 more turns on his third per revived ally. (In other words, the highest cooldown possible for Amarna’s third is 12 turns.) Oh yeah, there’s also Vivachel too. Her third skill, Song of Switched Destiny, will switch the attack bar and HP of the current enemy, and it can’t be resisted and also ignores Immunity. So basically, if the enemy has 100% HP and 1% attack bar, it’ll be 1% HP and 100% attack bar. The only cost is that she’ll also put herself to sleep for a turn, too. The Solution: Take out both Amarnas first things first before you even worry about Vivachel. Worst scenario possible, one Amarna revives another, and then you just kill them again. But guess what? They can’t revive again, because their third will be 7 turns. 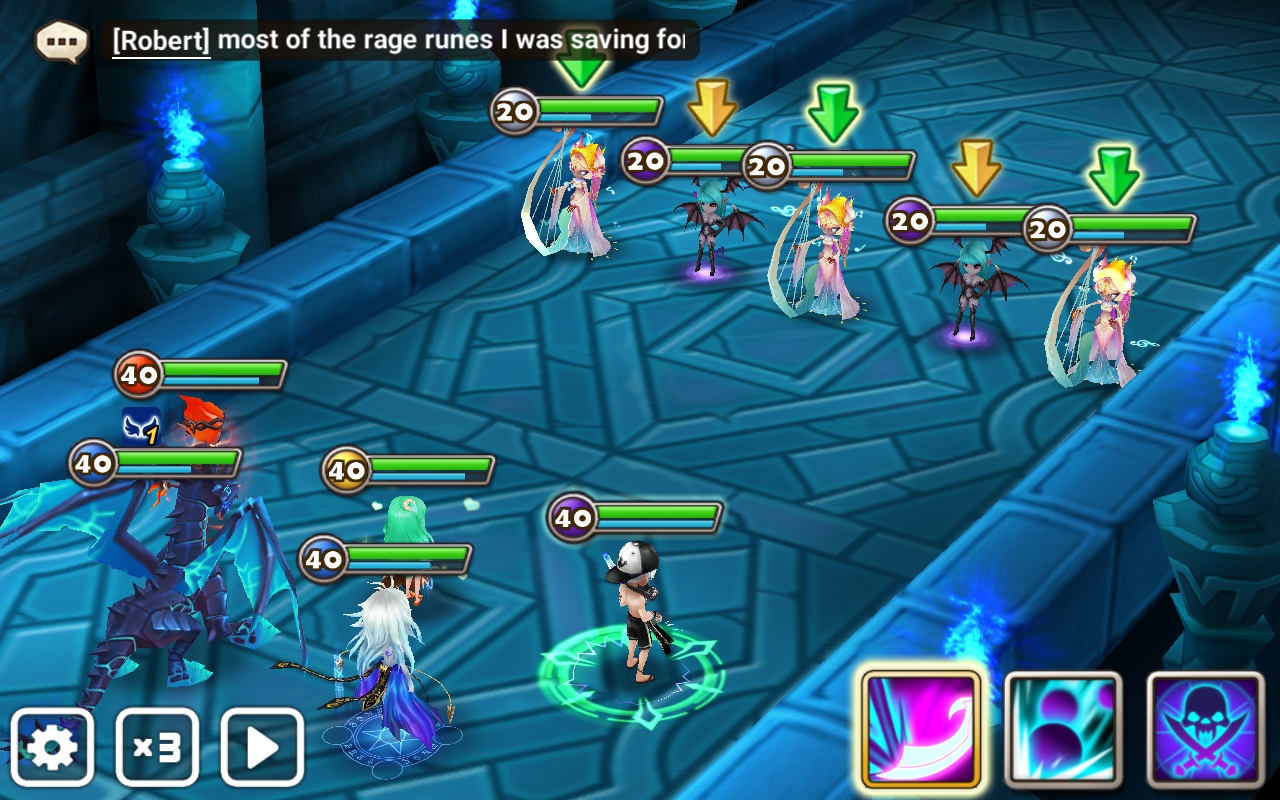 We’re at the last stage before the boss, now! Here, we have three Celias (light Harp Magicians) and two Isaels (dark Succubi). The Threat: This stae is going to be super annoying to deal with, mainly because, again, Harp Magicians and Succubi go really well together. Celia’s passive Dreamy Leader will remove a random beneficial effect on her enemy every time she attacks, and will put them to sleep if she successfully removes that buff. Isael (and all the succubi, for that matter), meanwhile, does not wake up enemies from Sleep if she attacks them. In other words, you can’t rely on Isael ruining all of Celia’s hard work. The Solution: Or at least, you don’t have to if you just straight-up kill both Isaels first. Then you only have to worry about Celia and her AoE sleep + passive. You’ve got this! …I think. 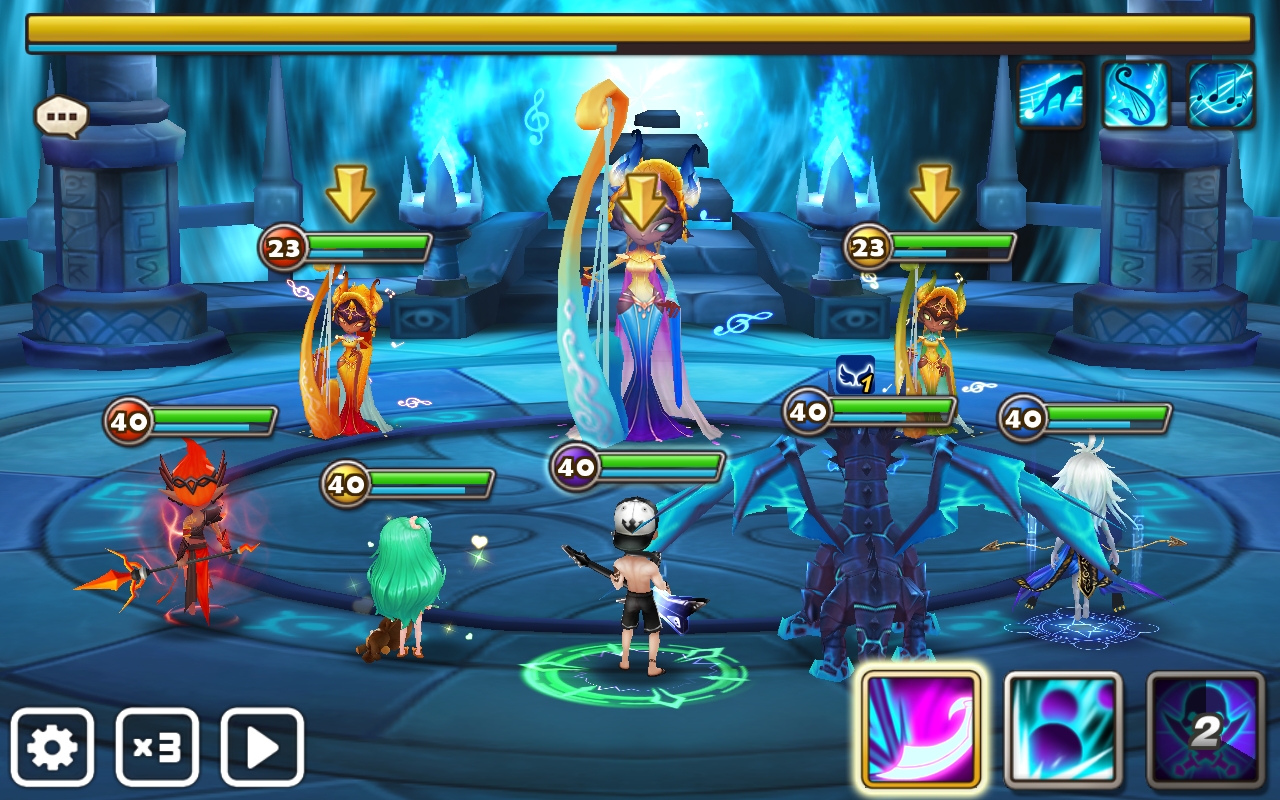 Alright, alright, we’re at the final boss! Now, usually, the element of Sonnet’s lackeys are gonna be pretty different, so there’s no one-size-fits-all advice here. The Threat: In this case, the biggest threat damage-wise is Harmonia, while the biggest threat healing-wise is Triana. Sonnet just…kinda sits there to be honest. She doesn’t do THAT much. The Solution: Well, for here, you HAVE to take Triana out first, otherwise you could be about to land the killing blue on Sonnet, but Triana goes “LOL nope” and activates her passive. But anyway, I’d personally go for Triana, Harmonia, and Sonnet here. That’s been my article on this month’s Hall of Heroes, Sonnet! How far up did you get? Let me know in the comments down below! But in the meantime, I’m Sara Ann, and I’ll see you in the next article!]]>