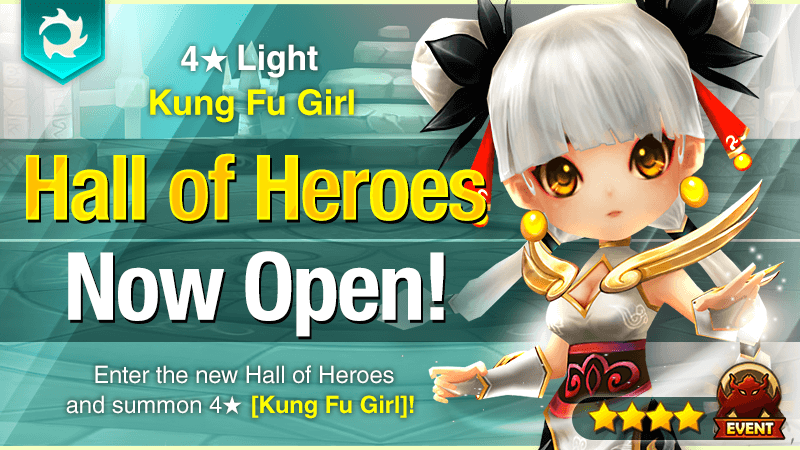 <![CDATA[On Wednesday, July the 11<sup>th, 2018, the Light Kung Fu Girl (Liu Mei) Hall of Heroes was announced, meaning we’re getting back to getting good Hall of Heroes mons, after the fire HoH last month, Antares, broke our streak. Before we begin, Hall of Heroes is a lot like Trial of Ascension, so that means you can use Trial of Ascension strategy and monsters (e.g. attack bar pushbacks, stuns and continuous damage are king). I strongly advise bringing your regular Trial of Ascension team. In my case, I’m using Baretta (L), Belladeon, Frigate, Veromos, and Charlotte. Let’s cut the chatter and get on with it!

Yes! Liu Mei is actually really good! Her third skill absorbs the attack bar of targets she attacks by 25%, meaning with the four-hit attack she’ll be able to get another turn after absorbing 100% worth of the enemy team’s attack bar! She makes a good damage dealer in the Rift of Worlds against Khi’zar Kha’jul, just like her water and dark sisters, Xiao Lin and Fei! I’d rune Liu Mei with Vampire and Revenge, ATK%/CRIT DMG%/ATK%. 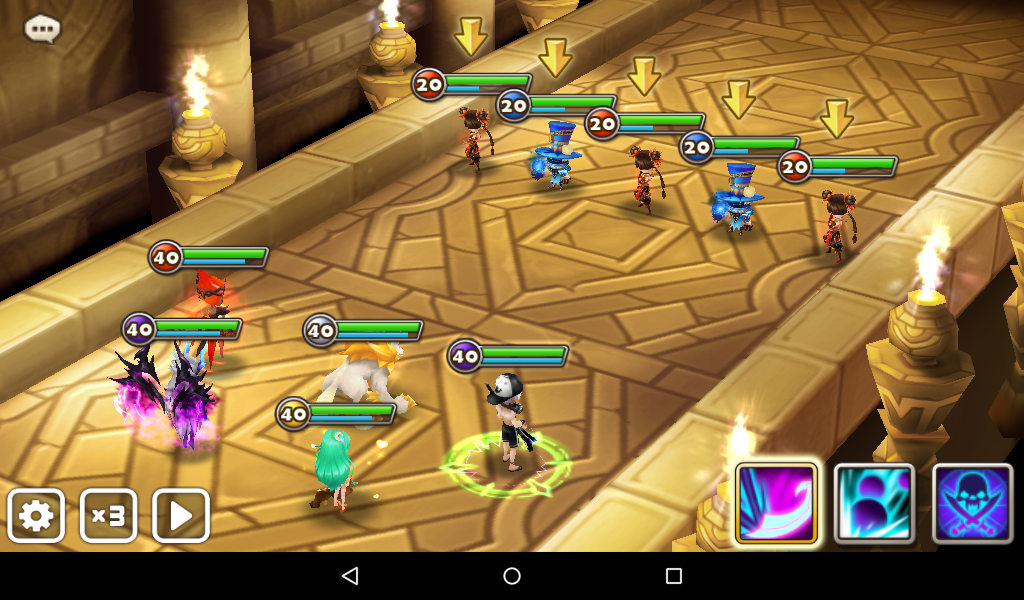 Welcome to stage one, watch as you die. This stage consists of three Hong Huas (fire Kung Fu Girls) and two Renos (water Dice Magicians). The Threat: I’d probably say Hong Hua is a really big threat. The Kung Fu Girls all share a similar third skill; called “[Element] Dragon Attack” that strikes random enemies four times. For example, Hong Hua’s third would be “Fire Dragon Attack,” Fei’s “Dark Dragon Attack” and so on and so forth. Like the Occult Girls’ third skills, though, they all do something different. Hong Hua’s Fire Dragon Attack increases the debuffs on enemies she hits by one turn, Ling Ling’s Wind Dragon Attack removes all beneficial effects on enemies she attacks, and so on and so forth. Reno does bring debuffs, so Hong Hua can and will increase those debuffs if she strikes with Fire Dragon Attack. That’s not all; Reno is sometimes considered a budget Lushen because his third skill, Dice Madness, will attack all enemies four times after rolling the dice. If he gets two dice that are the same numbers (e.g. two dice that rolled a Five) he’ll ignore the defense of everyone. The Solution: Kill Reno first. If there are no debuffs for Hong Hua to extend the duration of, then most of the threat of her is taken out. Despite this, Hong Hua still has her third skill, which causes one-turn defense break. After you get Reno done, you need to stunlock and kill the Kung Fu Girls before they can get a chance to proc their Dragon Attacks. 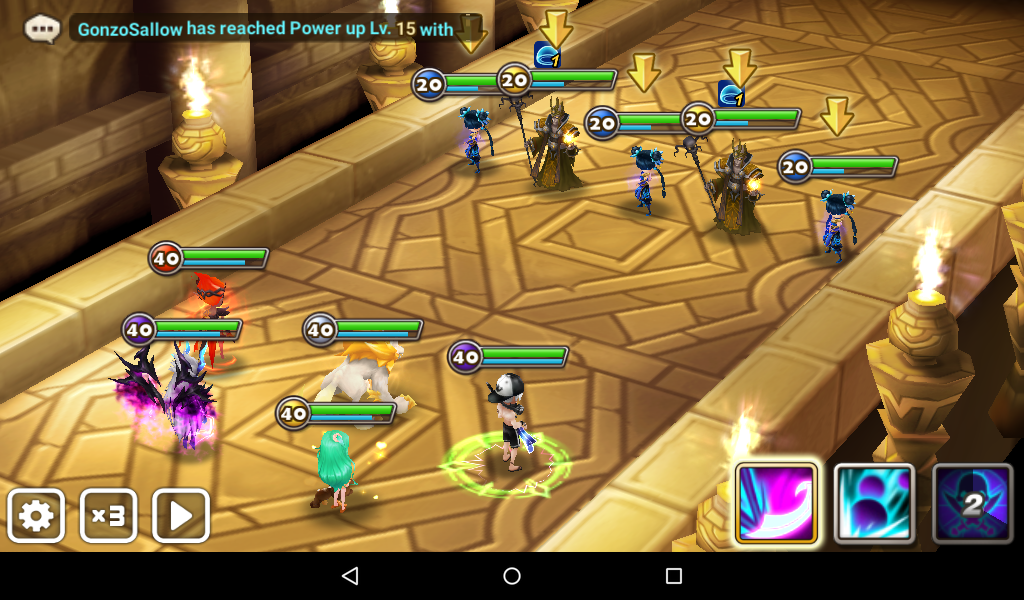 Here, we have three Xiao Lins (water Kung Fu Girls) and two Fucos (Wind Liches) The Threat: Did you know that Xiao Lin is the second best Kung Fu Girl? The number one best is Fei, and we’ll talk about why she’s so good later. But for now, let’s talk about why Xiao Lin is so good.  Xiao Lin’s special effect on her third skill is the fact that each attack will deal 25% more damage if the enemy she hits is suffering from a harmful effect. In other words, if she strikes a Lyn with two Continuous Damage effects on her, she’ll deal 50% more damage than if she strikes a Lyn with no debuffs on her. The Kung Fu Girls are also the princesses of counterattacks – their first skill has a second chance to proc into their second skill, and when their Water Dragon Attack is on cooldown, they have a 25% chance to proc into their first skill, which can also go into their second! Fuco isn’t that much of a challenge; he’s just more of an annoyance than anything else. Whenever he gets a turn, he grants a 1-turn shield on himself that absorbs damage according to his level – so if he’s, say, level 35, then his shield will absorb 3500 damage. Additionally, if he’s attacked while he has this shield up, he’ll decrease the attacker’s speed for 1 turn. The Solution: Take out Xiao Lin first. Actually, try and take out every Kung Fu Girl before she can use her third skill, this way you can avoid the headache of massive damage being dealt to you, along with counterattack galore not being a problem. Fuco has a shield, yes, but that shield can be easily broken because it doesn’t absorb that much damage. Hall of Heroes has been known to go past the maximum level of monsters, just like in Trial of Ascension – Verdehile may only have around 9800 HP at level 40, but that won’t stop ToA from bringing his level to 55 and his HP to, say, 12,000. It’s…wonderful. 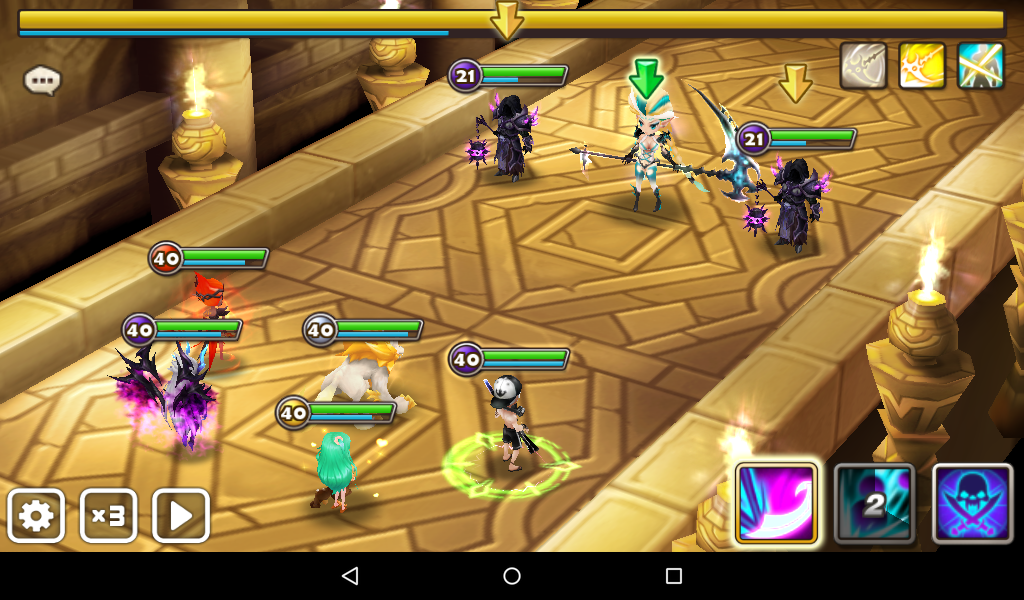 Miniboss time! The miniboss consists of one Asima (light Hell Lady) and two Dias’ (dark Death Knights) as her lackeys. The Threat: As it turns out, Asima is really annoying to deal with. All three of her skills provide Continuous Damage – Skill1 attacks one enemy and gives them a DoT for one turn, second skill Gouge attacks all enemies three times and brings a 1-turn DoT per hit (and deals 50% more damage to enemies under DoTs) and Crumble does the same thing, except it also brings defense break. Dias is like Darion; his passive Control will decrease the damage all allies take by 15%, and if you attack Dias, he decreases his chance of being hit by a critical hit by 50%. It’s really terrible. The Solution: It’s a good thing that you don’t have to kill the lackeys anymore! Asima’s really squishy, even with the damage she takes being decreased by 15%, and there are no healers in this stage, so you can just go straight for Asima and you’re golden! 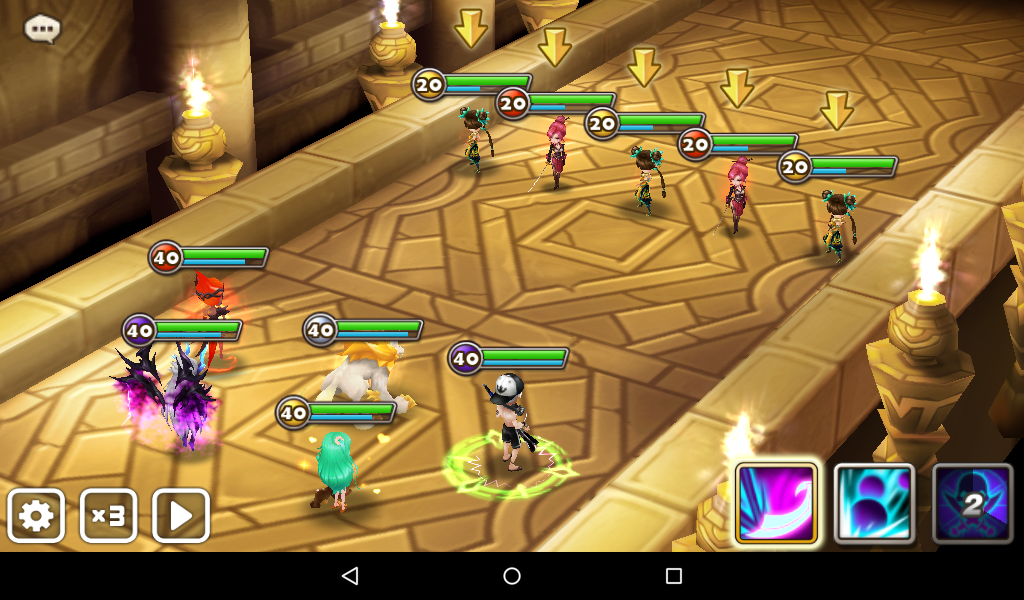 Stage 4 is made up of three Ling Lings (wind Kung Fu Girls) and two Lisas (fire Neostone Agents) The Threat: While Ling Ling can remove beneficial effects, she’s not that big of a threat. Her damage multipliers are kind of low, so she doesn’t do that much damage.  Lisa, on the other hand, is a real jerk-wad and is the biggest threat of the stage. Her third skill, Attack Command, removes all harmful effects off all allies, and then up to four allies (including herself) will gang up on a monster. In other words, if you don’t leave Lisa permanently stunned or something, she’ll cleanse all those DoTs you’ve worked so hard at putting on everyone, and then possibly kill your Charlotte or something. Trust me, that’s happened to me way too many times to count. The Solution: Is it just me, or is this Hall of Heroes way more difficult than usual? I’ve had to swap Frigate for Eladriel by round 5. I usually have to by round 7 or something. Anyway, go for the Lisas first. This way, if they’re dead or stunned, they won’t be able to cleanse everyone. …Or you could do what I did and killed all the Ling Lings. Turns out Ling Ling is really squishy, so I could pretty much one-shot her with Charlotte’s first skill with only an attack buff; no defense break needed. Ling Ling may be the worst of her sisters, I just realized. 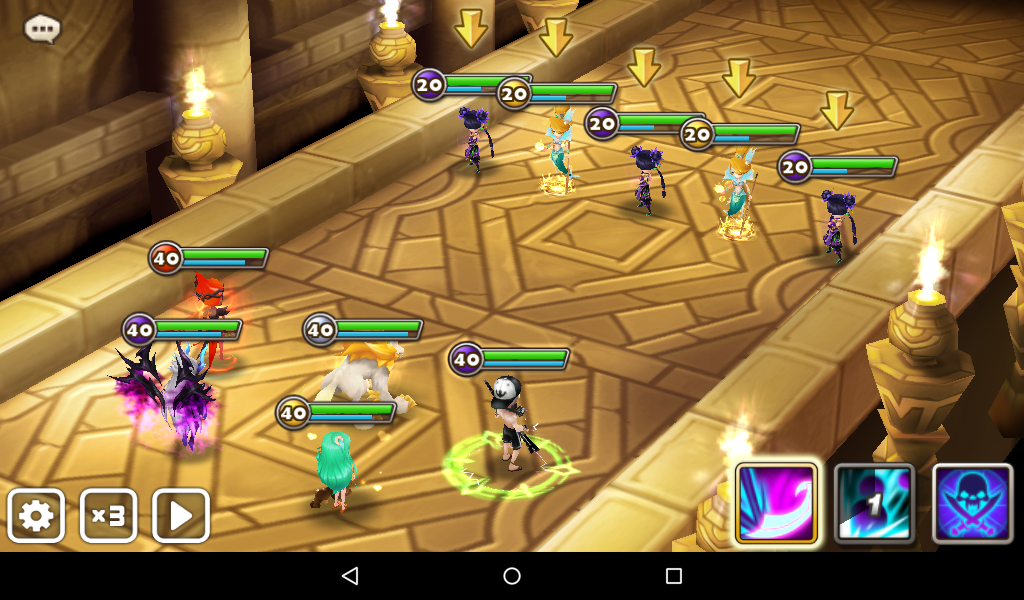 Oh boy. We’ve gotten to the worst stage in the Hall of Heroes. This stage is made up of three Feis (dark Kung Fu Girls) and two Cichlids (wind Mermaids) The Threat: Remember when I said that the second best KFG was Xiao Lin; beaten only by Fei? Well, here’s why Fei is bae, in Reddit’s words: Dark Dragon Attack has a 25% chance to Ignore Defense per hit. I’ve seen Feis use Dark Dragon Attack on a defense-broken opponent and the hits that ignore defense will be about 25k per hit. If you’re thinking “that is absolutely crazy,” well you’d be right. This is a very dangerous stage of HoH, because this stage can be what makes or breaks a successful run. Cichlid isn’t a damsel in distress, either. Her second skill, Air Shield, brings a complete single-target cleanse and a 3-turn shield based off of 20% of her Max HP. Crushed Hopes, her third skill attacks three times – the first hit removes all beneficial effects off an enemy, the second hit decreases the Defense for 2 turns, and then increases the cooldown of their skills by 2 turns. The Solution: Just kill Fei first. You don’t want her to ignore the defense of your monsters. After all three Feis are gone, the main threat is gone, and you can work on the Cichlids. They don’t heal or anything, so you don’t have to worry about bringing Unrecoverable to the table. I’d still recommend you watch out for their cleanse, though. While it’s not as good as the Briefing skill for Neostone Agents (where they do a complete cleanse and fill up a target’s attack bar), it’s still a Shield. 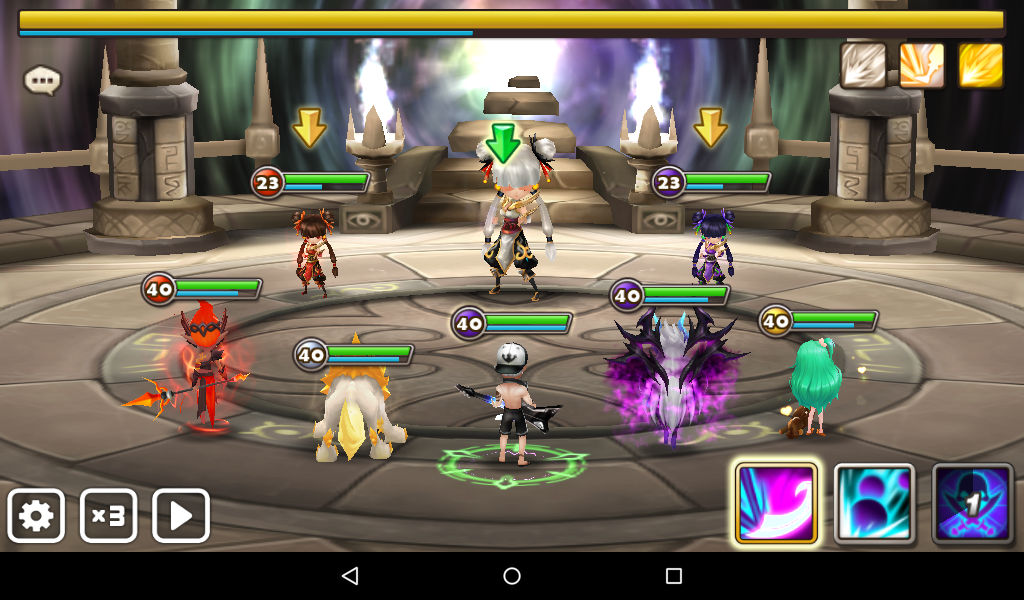 It’s boss time! The Threat: The threat differs per stage, thanks to the lackeys. For example, in a stage where the boss is Liu Mei and the lackeys Xiao Lin and Fei, then I’d say the biggest threat is Fei. The Solution: Again, because the threat varies, the solution varies. With the Fei and Xiao Lin example, I’d say kill Fei, stunlock Xiao Lin, and then kill Liu Mei. You don’t need to kill the lackeys, but sometimes it makes it easier for you. Anyway, this is a really difficult Hall of Heroes, and I’m hoping you can get at least one Liu Mei! I’m Sara Ann, and I’ll see you in the next article!]]>