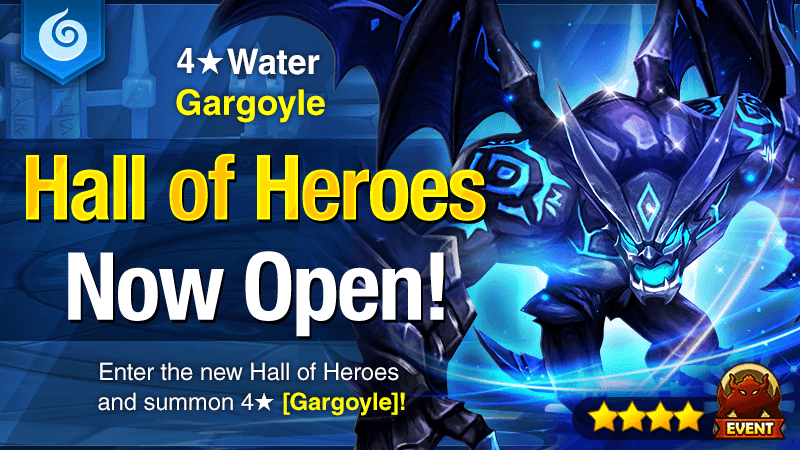 On Wednesday, July the 6th, 2022, the Tanzaite (Water Gargoyle) Hall of Heroes was announced. He’s not bad, but he has brothers that are much more useful, and he can be used as skillups for them.

…He’s fine, I guess. However, his other brothers have much better passives than he does, and as such Tanzaite works much better as a skillup for those guys (such as the wind variant). That’s pretty much Tanzaite’s only use, being a skillup.

The Threat: Does anyone else remember the days when Chasun was nearly unkillable? I do, too. She’s still a good unit, even to this day, but she’s been outshined by other healers who can do her job, but better. However, her Fallen Blossoms s3 is still incredibly unique, and can devastate you if she times it right.

Kunite is… alright, I guess. His passive skill essentially screws over the enemy if they hit him (or his allies) with a multiple-hit attack while he’s a statue, by greatly decreasing the damage they take on an attack with multiple hits.

The Solution: Basically, you’ll want to burst down Chasun first. I hope you brought allies with only one-hit attacks; however, in case you didn’t, it would be best to use them as soon as you can, before Kunite turns into a statue. Chasun’s healing is just totally unfun to deal with, and you’ll want to get rid of it as soon as possible.

The Threat: Emma is a pretty good unit, in terms of healing. Don’t get me wrong, she’s no Chasun, but she can still put a damper on your plans. Kunite is who you really want to watch out for, though; every time someone hits him in his statue form, he will inflict damage proportionate to his defense, and then decrease his cooltime by one turn.

The Solution: Similar strategies to Stage 1will work just fine in this stage. Go for Emma first, make sure you don’t attack Kunite when he’s in his statue form, rinse and repeat.

It’s time for the miniboss! We have a Poseidon (water Sea Emperors) and two Claras (fire Pierret).

The Threat: The miniboss is definitely going to be our biggest threat. Poseidon is no joke; not only does he have an AoE attack that completely resets all enemies’ attack bar, but it also will not ever land as a glancing hit. Clara isn’t fun to mess with, either, due to her s3 removing buffs from the enemy and being an AoE attack.

The Solution: Luckily, you don’t have to kill Clara to clear the stage. If you just kill Poseidon, you’ll be able to advance onto the next stage. He can be a lot more manageable to deal with if you have someone who can give Immunity (though Clara may be a bit of a problem in that regard).

The Threat: The threat here is Onyx, by far. Onyx literally cannot die as long as he is a statue, and Mihael being a healer means that will only enable him. He is such a pain to deal with, you’d better hope that you can kill him before he gets another turn and is able to transform himself into a statue.

The Solution: Go for Mihael first. Although it may sound like a good idea to burst down Onyx while he is still in his Gargoyle body and not a statue, it would be better to go for Mihael. This is because, if you get Onyx down to low HP and he turns into a statue, Mihael may end up healing him and almost completely negating the damage (thus causing the whole cycle to start overa gain).

The Threat: The threat here is definitely going to be Phenaka. I haven’t seen a lot of people use him, but Phenaka is really annoying to deal with. Frigate is a really good unit for increasing Attack Bars (I would know – I have one), but Phenaka is really annoying. It’s because, as long as you attack him in a statue, he’ll increase the cooldown of your skills by 2 turns.

The worst part is that it can go over the maximum cooldown count of the skill.

The Solution: The solution here is going to be to go for Phenaka first. It may sound weird, going for him first, but it would be a really good idea to leave Frigate in as a buffer, in case all three Phenakas are left as a statue and the player does not want to attack them.

This is the only main stage where the other units aren’t healers, so players can really leave Frigate alone without too much of an issue.

We’re at the boss now! We’ve got a Tanzaite, but the Gargoyles by his side will always be a different element. In this case, we have a Kunite and a Malite.

The Threat: As always, the threat is going to be different depending on what the other two Gargoyles are. In this case, I would probably say Malite is a big threat, but not as much as Kunite in a statue form. Tanzaite is… fine, I guess. There’s just not really much to talk about regarding his skillset.

The Solution: The solution will always be different, as it depends on who are the other two gargoyles. In this case, though, I would probably say remove Malite from the scene first, maybe take down Kunite if his reduction of damage from multiple hits is giving you problems, and then go for Tanzaite.

I hope you all enjoyed this article! How many copies of Tanzaite did you all get? I’ve already gotten three copies by now, and I plan on getting some more! In the meantime, though, I’m Sara Ann, and I’ll see you in the next article!