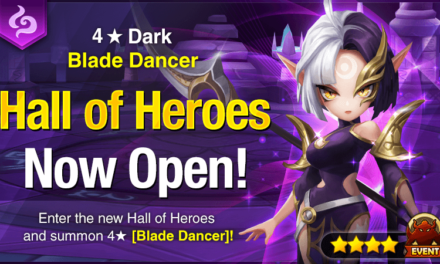 On Wednesday, July the 7th, the Vereesa (dark Blade Master) Hall of Heroes was announced. I don’t think anyone expected it, because she’s really, really good! She’s probably one of the better buff removers out there, since her s3 has three chances to remove buffs, and it’s a 100% chance when fully skilled up.

Surprisingly, yes! Her s2 attacks the enemy three times, decreasing the Attack Bar by 25% each hit, and then ignores Defense if she attacks an enemy with 0 Attack Bar. And as mentioned, her s3 attacks all enemies 3 times. When fully skilled up, she has a 100% chance each hit to remove all buffs, decrease attack, and plant Glancing Hit for 2 turns on the enemies.

The Threat: Cordelia and Clara are both equally problems. Clara’s s3 removes buffs from all enemies and stuns them. Cordelia’s more of a single-target unit, and her passive increases her attack power in proportion to her speed. This stage can probably end up tripping you up really bad if you’re not careful.

The Solution: Clara can go out first, so she doesn’t beat the snot out of you and remove your buffs. Cordelia is countered pretty hard by Speed decrease debuffs, as well. You can either burst her down or decrease her speed, and either works well enough.

The Threat: The threat’s gotta be Berenice. She’s more of a supporter unit, but she increases everyone’s Attack Bar by 30% along with increasing their Speed and Critical Rate for 2 turns. Ryan’s s3 is guaranteed to land as a critical hit, and each hit inflicts Continuous Damage for 1 turn. His s2 also instantly gains another turn if the enemy is under 50% HP afterwards, and decreases defense if it lands as a crit hit.

The Solution: I’d probably say go for Ryan first, since he’ll be the main source of damage. Berenice is the supporter, who buffs up Ryan for extra damage. Plus, with her Crit Rate buff, he’ll also decrease defense as well. Berenice can’t initiate maximum damage if Ryan is dead.

The Threat: I’d probably say “don’t ignore Gemini if you’re a lower level player.” Gemini removes a buff from every enemy he attacks if he has less buffs than them, and also increases his ATK by 50% if his HP ratio is lower than his target’s. His s2 is also an AoE attack that is guaranteed to land as a Crushing Hit and decrease defenses for 1 turn. (Oh yeah, did I mention that this team doesn’t have a way to buff itself up?)

Trinity is the main threat, though. Her s2 gives herself Invincibility if it kills an enemy, and her s3 decreases both her allies’ and enemies’ HP by 15%. After that, she inflicts massive damage on all the enemies. It’s not fun.

The Solution:  You don’t have to kill the lackeys before going on, you can just aim for Trinity and go. But honestly, if you’re having problems because of Gemini, there’s no shame in fighting them first things first. Either way, once you take out Trinity, you can move on to stage 4.

The Threat: Fun fact: Woochi was my first ever Fake5. It was that day I learned what pain was. Anyway! I’d probably say that Woochi is the biggest threat support-wise, since his s3 sets all of his enemy’s attack bars to 0, and decreases his allies’ skill cooltime by 1 turn.

The Solution: I’d probably say aim for Woochi first before you go for Lariel. Woochi’s the support unit, and he’s surprisingly beefy to deal with. Lariel just deals a ton of single-target damage. Lariel can more or less be stunned and ignored until Woochi dies, though.

The Threat: The threat here is definitely going to be Leah. You’ll need to be faster than her, because her damage increases up to 200% proportionate to the difference in Speed between her and the enemy, as long as she’s faster than them. Dusky also has the problem of 2-turn Speed buff on his s2, along with granting himself a 3-turn shield whenever he ends a turn without attacking.

The Solution: Decrease Speed debuff works wonders on her, if you can’t outspeed her in the first place. After that, Dusky doesn’t do much. Even if you Stun him and he plants a shield on himself, it’s pretty easily broken through.

The Threat: The threat largely depends on who’s up as the lackeys. In this case, though, yes, Vereesa is the biggest threat here, followed by Berenice and then Cordelia. Berenice is mostly the bigger threat than Cordelia because of her Attack Bar increase, along with the Speed and Crit Rate buff. However, do note that Cordelia increases her Attack in proportion to her speed.

The Solution: Like the threat, the solution depends on the lackeys. In this case, I would say that taking out Berenice would be your best bet first, and then dealing with Vereesa. Cordelia’s Speed increase passive can’t reach its full potential without Berenice.

I hope you all enjoyed this article! How many copies of Vereesa did you get? Let me know in the comments down below! In the meantime, though, I’m Sara Ann, and I’ll see you in the next article!