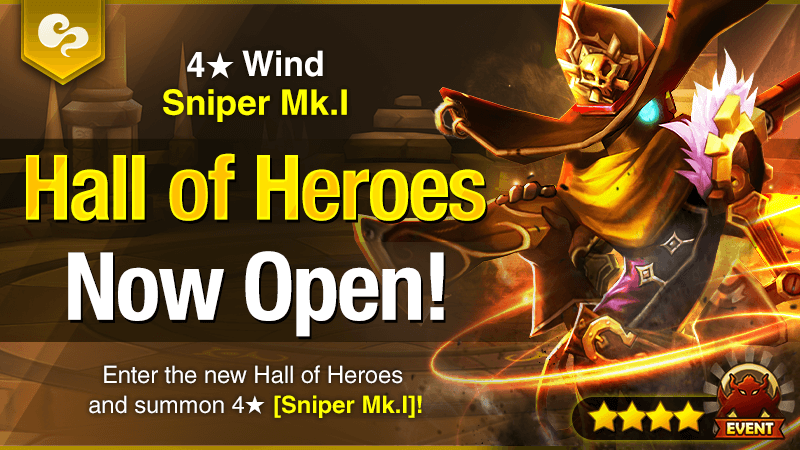 On Wednesday, June the 8th, 2022, the Carbine (wind Sniper Mk.I) Hall of Heroes was announced. Carbine isn’t exactly the best unit, but he can do a lot of single target damage. If nothing else, he can be used to skill up his other, better brothers.

Not particularly. I mean, his s2 and his passive mesh really well together in order to increase his damage on his s1, but apart from that, he is pretty niche of a unit. He would better used as skillups for his other brothers.

The Solution: The main solution would be to go for Covenant first. Although Celine has a lot of really good buffs and a good way to set up her allies, she can’t really do much if the main damage dealers are dead.

The Threat: The threat here is probably Chilling. Every time he attacks, he will steal your buffs. This is just a known fact of life, as Chilling’s whole gimmick is about buff stealing – he was a viable choice in the Dragon’s dungeon for a while because of this. Carcano has damage, but his passive is a bit randomized.

The Solution: I think the solution here would be to take down the Carcanos first. Their passive brings defense break, but luckily it’s easy enough to deal with. After that, you can safely take down Chilling and go for it.

The Threat: The threat here is probably Trevor. However, Louise’s heals are seriously not something that you want to deal with. Luckily, she can be pretty easily bursted down by Unrecoverable; even though one of her skills removes harmful effects, it is a single target skill.

The Solution: The solution here is to go straight for Louise. Because she’s the miniboss of the Hall of Heroes, you just have to kill her and not her lackeys to progress. Of course, if Trevor is giving you problems, there is no reason that you shouldn’t kill them first.

The Threat: The threat here has got to be Magnum. Although Korona can remove the buffs off of enemies – but also debuffs as well – Magnum has extremely high damage, and his passive will increase his attack bar by 25% whenever an enemy gains a buff.

The Solution: I think the solution here is to burst down Magnum first. If you have any units who apply buffs to their team, don’t do it yet, and wait until the Magnums are dead.

The Threat: Dragunov stays in his sniper pose if he kills someone (which means that his next attack will deal serious damage), so that’s definitely something that you don’t want to deal with. Tablo, of course, is just super annoying to deal with; his attack bar manipulation is terrible to be on the receiving end of.

The Solution: The solution here is to go for Tablo first. His attack bar manipulation sucks to be on the receiving end of, and he can enable Dragunov to deal even more damage by lapping around your team. Plus, there are only two Tablos to deal with.

Welcome to the final boss! We’ve got a Carbine and two other Snipers (though in Floor 1’s case, it’s a Covenant and a Magnum).

The Threat: The threat here depends on who the other two snipers are. In this case, though, the threat here would probably be either Covenant or Magnum. Carbine isn’t exactly a threat in general, but he can be a bit annoying to deal with.

The Solution: Luckily, all you have to do is burst down the Carbine. As he’s the boss of Floor 6, you don’t have to kill the other enemies. Of course, though, there is nothing that is stopped you from killing the other lackeys if they keep bothering you.

With that said, I hope you all enjoyed this article! How far in did you get into this HoH? I’m Sara Ann, and I’ll see you in the next article!