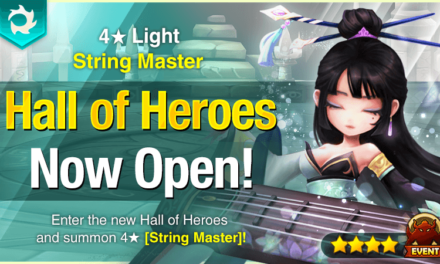 On Wednesday, June the 9th, the Dongbaek (light String Master) was announced. To be honest, no one’s really excited for her, but I can’t really see why. She looks like a decent unit to play around with? I mean, she’s not meta-breaking, but she looks at least amusing.
Anyway, before we begin, Hall of Heroes is a lot like Trial of Ascension, so that means you can use Trial of Ascension strategy and monsters (e.g. attack bar pushbacks, stuns and continuous damage are king). I strongly advise bringing your regular Trial of Ascension team. In my case, I have decided to use Charlotte, Loren, Frigate, Verad, and Rica.

Welcome to Stage 1, we’re doing our best. Here, we’ve got three Hongyeons (fire String Masters) and two Julies (water Pierrets).
The Threat: Hongyeon is actually pretty dangerous. Julie, you don’t need to worry about, as long as you make sure that she stays below 100% HP so she can’t activate her third skill’s extra stuff. Hongyeon’s third skill increases all her allies’ attack bar by 15%, heals all her allies that get a turn by 15%, and then increases their Attack Power for 1 turn.
The Solution: Hongyeon is the healer of the group, so you need to work on her first. As long as you don’t let Julie start a turn with 100% HP, she can’t activate Thousand Shots’ six hits. So, aim for Hongyeon first. Just straight up burst her down, and then go for Julie (after making sure she’s below 100%.)

Time for stage 2! We’ve got three Songseols (water String Masters) and then two Tauruses (wind Kobold Bombers).
The Threat: It’s mostly Songseol that’s the problem. Songseol makes sure that you cannot gain beneficial effects when she plays her s3. As in, you can’t get immunity, attack buff, etc. Taurus just increases your allies’ cooldown by 1 turn, and lands as a Crushing Hit no matter what.
The Solution: Songseol. Aim for Songseol. Her s3 is super annoying to deal with, and you don’t want to pray that she doesn’t hit her s3 at the most inconvenient time. Taurus, you don’t really have to pray that he doesn’t do something, but Songseol makes everything a bigger problem to deal with.

It’s miniboss time! Here, we’ve got an Eludia (light Phoenixes) and two Frigates (dark Pirate Captains). Frigate vs. Frigate, guys!
The Threat: Frigate. I can say, without a shadow of a doubt, it’s Frigate. I mean, yeah, Eludia fully strips buffs, plants AoE DEF Break on your allies for 1 turn, and then inflicts damage, but you know who sets her up to do that? Frigate. He increases everyone’s attack bar by 50% and then decreases their cooltime by 1 turn.
The Solution: I’d probably say burst down Eludia. Frigate does need to be worried about, but constant attack bar decrease and stuns can do the trick for him. If you don’t think you can take him down in time, though, then you can feel free to take out both of them before you go for Eludia.

We’re more than halfway done! We’ve got three Yeonhwas (wind String Masters) and two Ludos (fire Dice Magicians).
The Threat: Yeonhwa and Ludo are both equally a threat. Yeonhwa because she instantly plays her s2 (meaning she’s playing a song) when she’s attacked while not playing a song, and Ludo because he’s a budget Theomars, and relies heavily on RNG.
The Solution: I’d probably say go for Ludo first. You don’t want to hope that he rolls a small number on a die and therefore does less damage. It’s best to just make sure you don’t have to deal with the problem at all. After that is Yeonhwa, but she’s not that bad to fight as long as you accept that she will immediately start playing a song the moment you hit her.

We’re almost at the boss! We’re this close to finishing up! We’ve got three Mirinaes (dark String Masters) and two Gins (light Ninjas).
The Threat: The threat is going to be Mirinae. Her s3 skill actually increases the amount of damage everyone in the battlefield takes – both her allies and her enemies, and increases her allies’ Attack Speed. It’s more like a double-edged sword. Gin pretty much has a 100% chance to inflict Glancing Hit on everyone with his s3 for 3 turns.
The Solution: Take out Gin first. Mirinae, as mentioned, is a double-edged sword, but once she players her s3, it becomes much easier to kill the rest of the team. Gin doesn’t really do much, so he’s easy to kill without much worries.

We’re at the final stage! Here, we have Dongbaek, and two other String Masters! In this case, the other 2 String Masters are her wind and dark sister, Yeonhwa and Mirinae.
The Threat: The threat is going to be Mirinae. She can instantly use Melody of Resentment whenever she’s attacked, so you better not attack her. Mirinae can actually end up increasing the damage that her allies deal with her s3. Apart from that, if you let Dongbaek play her song and then use Loren, you can just… pretty much make sure she never gets a turn.
The Solution: Definitely go for Dongbaek. Just aim straight for her. This is a very easy fight, since it’s floor 1. It repeats in floor 6, though, and she can still get burst down pretty easily, especially once she starts playing the song. Her HP decrease is a bit of a problem, but taking healers is an easy mitigation.
I hope you all enjoyed this article! How many Dongbaeks did you get? I’ve already gotten three and a half so far. Feel free to let me know how many Dongbaeks you got in the comments below. But, in the meantime, I’m Sara Ann, and I’ll see you in the next article!